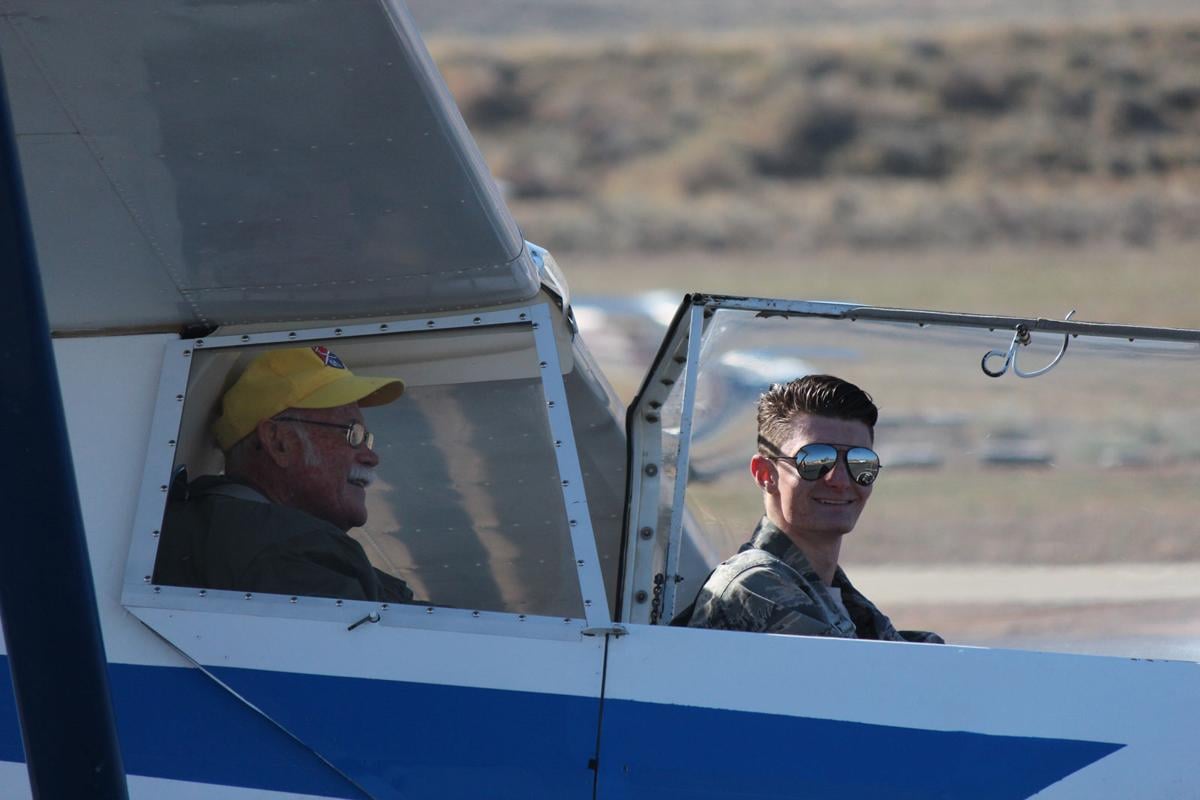 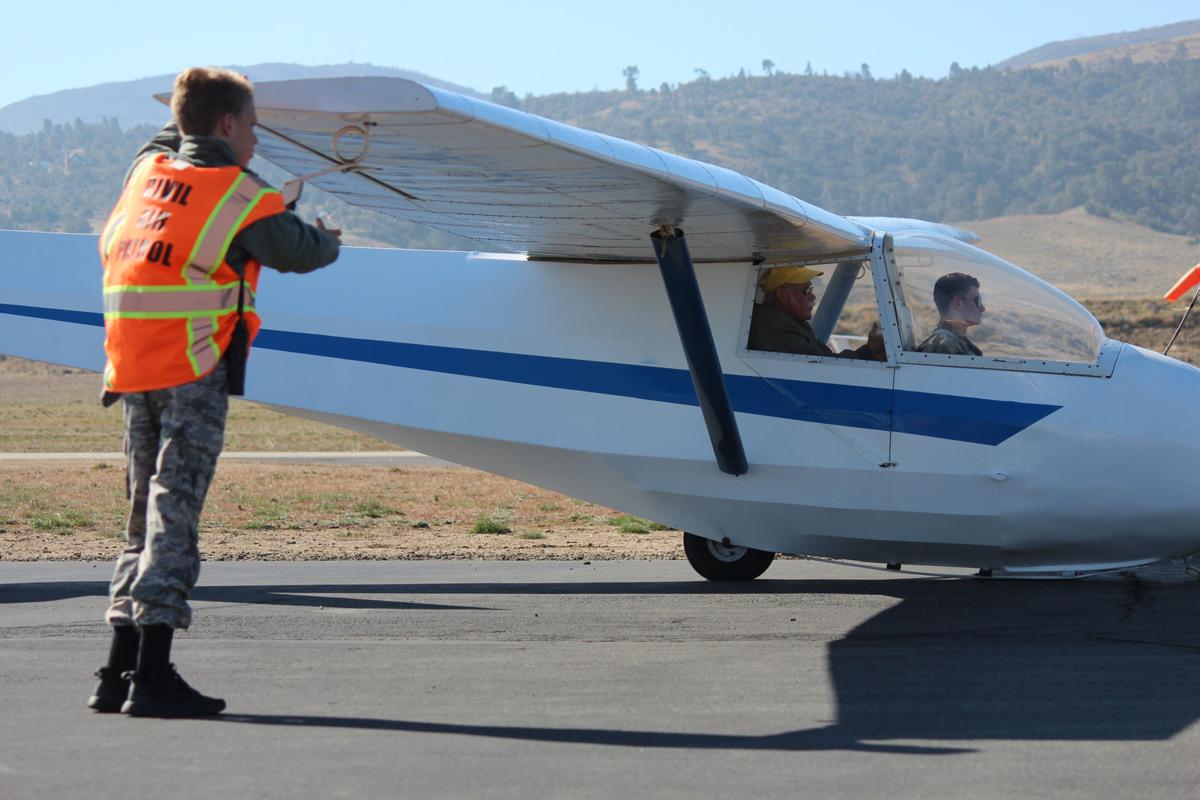 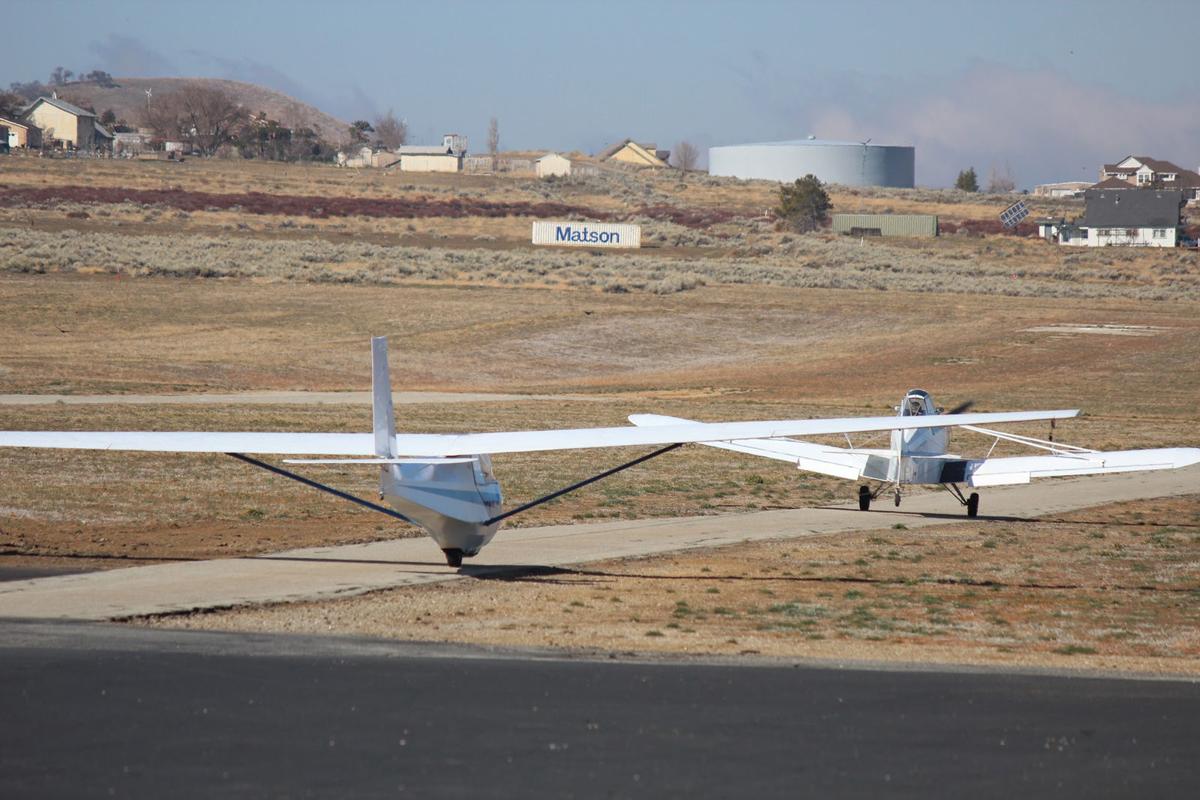 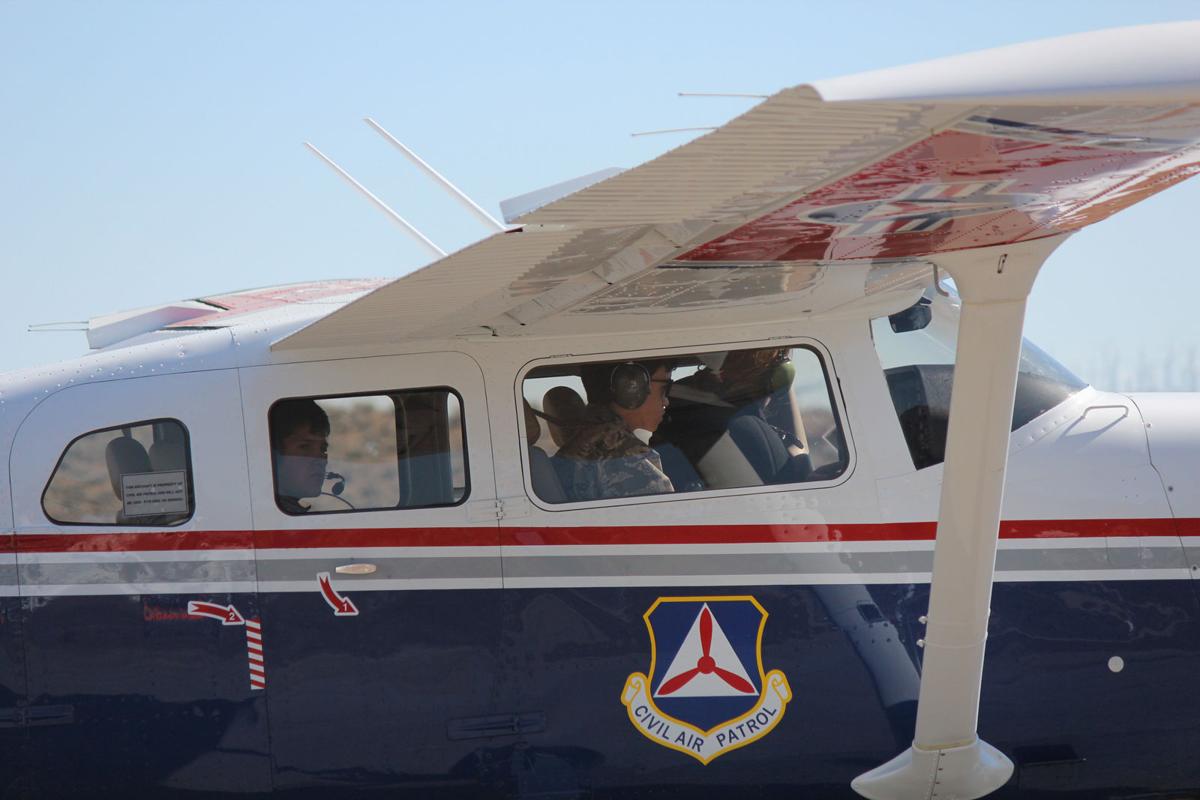 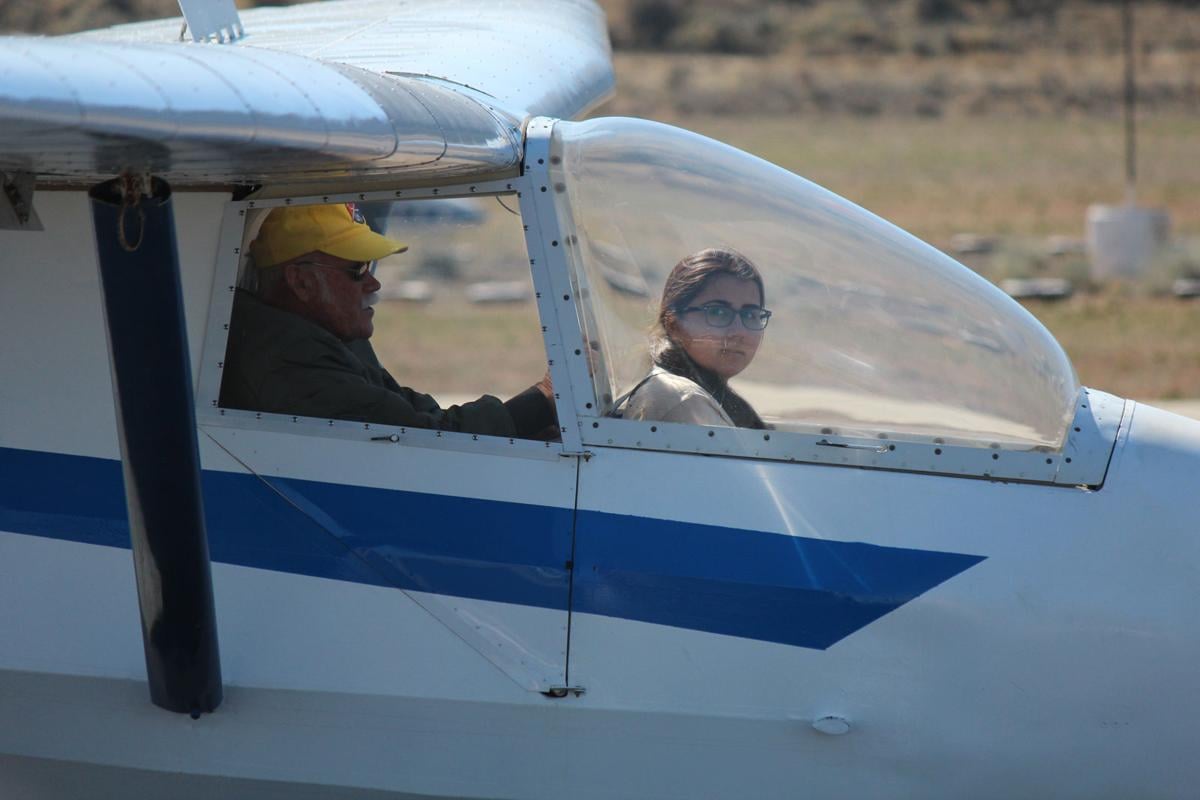 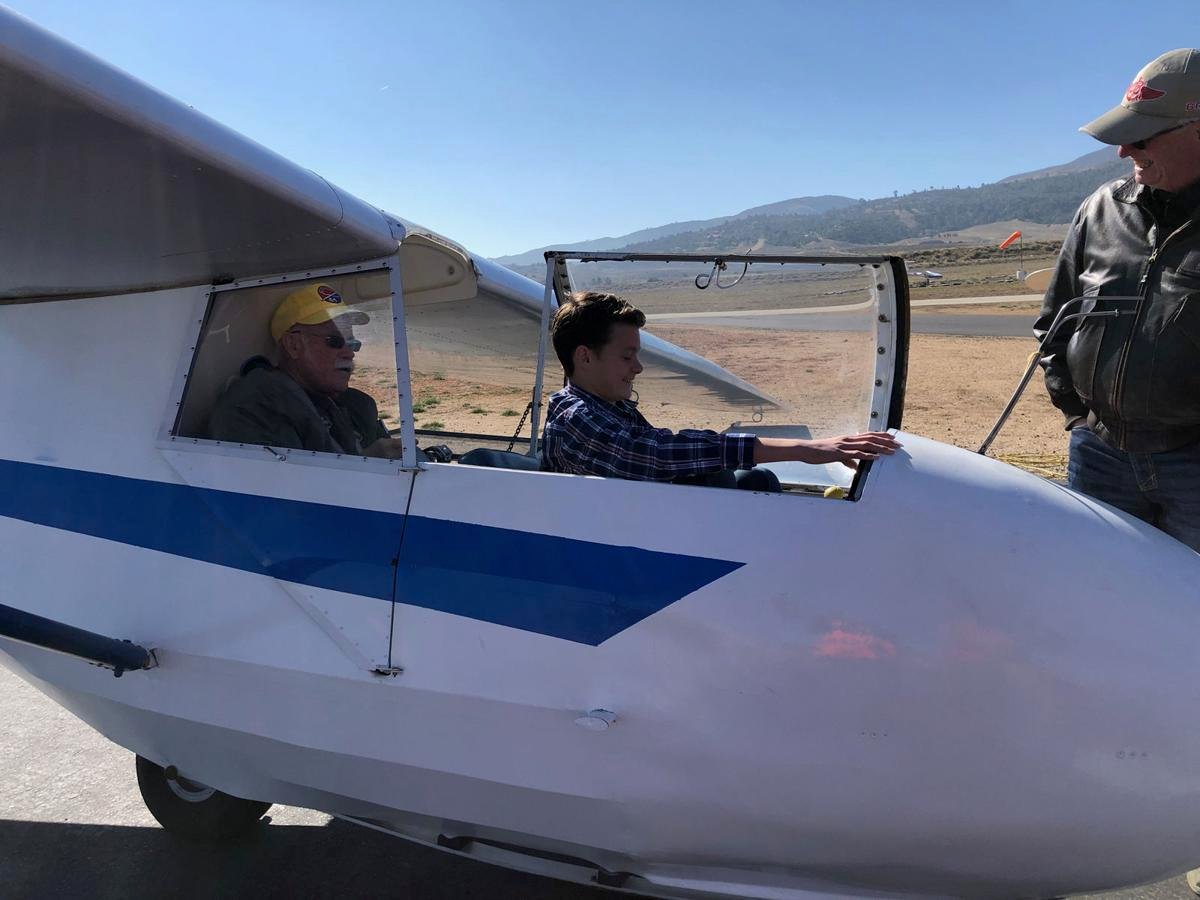 On Feb. 23, it was a picture perfect weather day for flying out of the Tehachapi Mountain Valley Airport for 18 young California Wing Civil Air Patrol cadets. The cadets, ages 12 to 18, were from local CAP squadrons, including Edwards Air Force Base Composite Squadron 84, Rosamond Poncho Barnes Composite Squadron 49 and Tehachapi Composite Squadron 46. Several cadets received their first flight in a Cessna or glider aircraft.

Major John Chapman, the Glider Orientation Ride Pilot, is the Los Alamitos Squadron 41 Commander, flew the 1970 Schweitzer glider N65824, and is a retired United States Navy Senior Chief Major. Chapman brought his glider flying skills for the cadets to experience a first time glider orientation flight. Chapman has been a Certificated Flight Instructor – Glider since 1976, 44 years to date with 7,000 flights and 2,300 hours in gliders.

Gary Aldrich, the Glider Tow Pilot, is a flight instructor with the Edwards AFB 412th Test Pilot Pilot School, and is a retired United States Air Force Test Pilot School Instructor. Aldrich was at the controls of the Piper Pawnee 25, otherwise known as a crop duster airplane. In the Piper Pawnee 25, the front sitting Cadet was given the opportunity to learn how to release the tow winch cable line from the Schweitzer glider.

Capt. Silke Eyles flew in on a new CAP Cessna 206 from the Bakersfield Composite Squadron 121, Group 6 headquarters, which is located at Meadows Field Airport. Eyles provided cadets front and back seat rotations orientation flights, which included a family of four Robles cadets. Eyles is currently a CAP instructor pilot, transport mission pilot and check pilot. She works for the California Aeronautical University, as a Flight Instructor. Previously, she was a Flight Instructor for the Edwards AFB Aeroclub, located on south base.

"I was amazed and so proud of these cadets in the level of education and professionalism displayed, during a full day of orientation flight duties," Harper said.

During the Glider Orientation Flight (O’ride), the cadet learned about glider ground handling, preflight, takeoff and landing. The cadet in the front seat released the tow line from the tow plane and then flew the glider under instruction.

Maj. Harper had requested for the cadets to provide an honest opinion for their flight experiences in both types of aircraft for Sunday’s orientation flights throughout the Tehachapi Valley and nearby airports. Here are a few cadet comments:

Cadet Miguel Camarena, Sq 46, said, “The glider and powered flights were fun. I liked learning about how a glider relies on wind and how an engine powered airplane relies on fuel. What I enjoyed most on the glider was releasing up the tow cable. On the powered flight I really liked working on turning the airplane. I really hope I can fly again.”

Cadet Airman Jonathan Madrigal, Sq 84, said, “I was very grateful for the opportunity to be a part of the Tehachapi Cessna and Glider O’rides. I can’t express this enough it was an amazing experience! It has truly piqued my interest in aviation.”

Cadet 2nd Lt. Drew Robles, Sq 46, said, "I really enjoyed flying in the glider. It was interesting learning and feeling how the glider handles as compared to a powered aircraft. It is a lot more visual than flying powered and there is no engine noise.”

Cadet Staff Sgt. Micah Billingsley, Sq 84, said, "The O’rides in the Tehachapi glider airport we’re very unique compared to the powered flights that CAP provides. Flying and navigation is much different on the glider then in a Cessna. You spent almost no time looking at the gauges in the cockpit and spent the majority of your time looking out the window, flying visually. This was an incredible experience and I am grateful for CAP making this work! I look forward to the next glider flight I will take!"

Cadet Jacob Billingsley, Sq 84, said, "I had a great time! It was amazing to be in the sky in the cockpit for the first time in a glider. I loved being able to hold the controls and being taught all about it. Thank you for the opportunity."

Without the dedication of qualified and trained civilian or active duty military volunteers, this Aerospace Education Flight Orientation program would not exist.

The Civil Air Patrol is officially a member of the U.S. Air Force’s Total Force of American Airmen. CAP is a nonprofit organization with more than 56,000 members nationwide. See GoCiviAirPatrol.com or CAP.news or www.cap.gov. for more information.