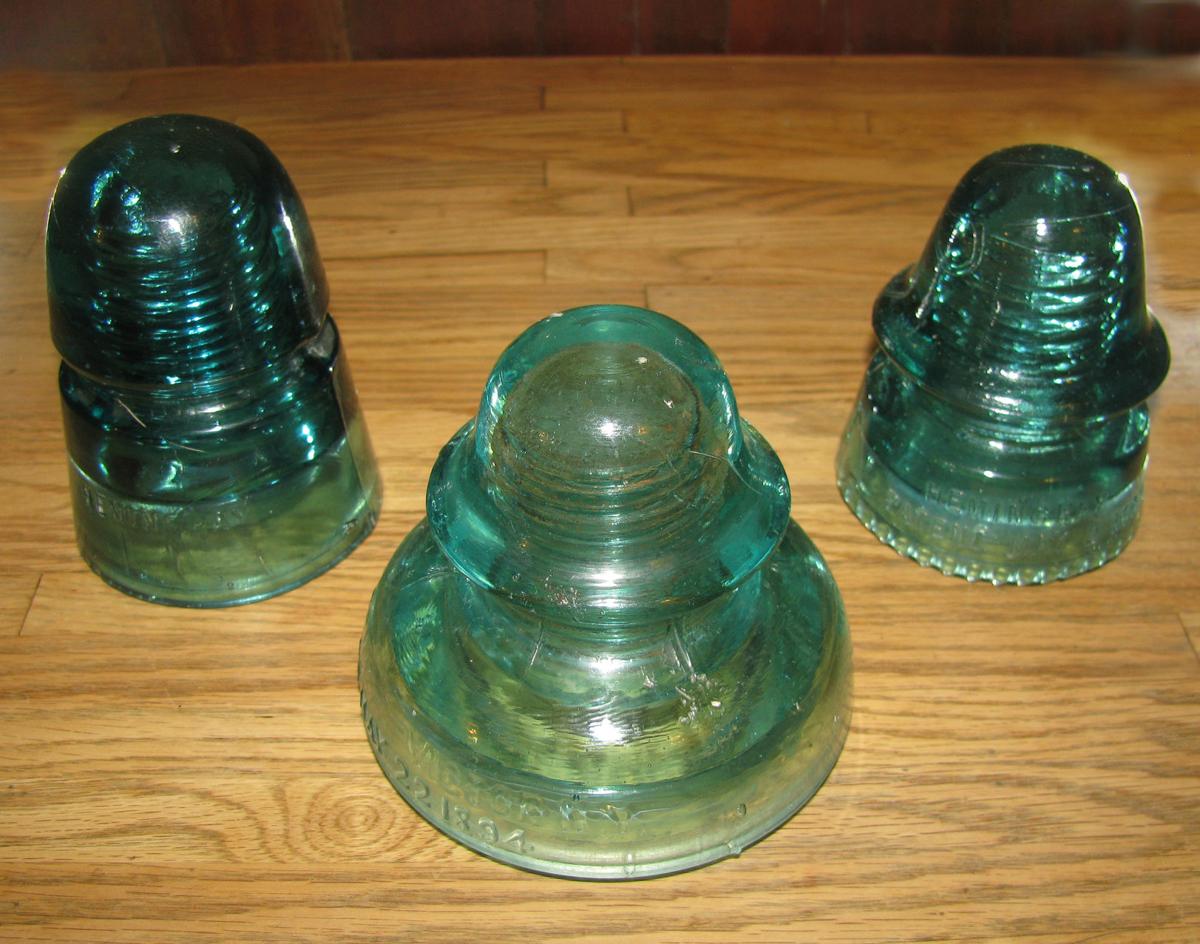 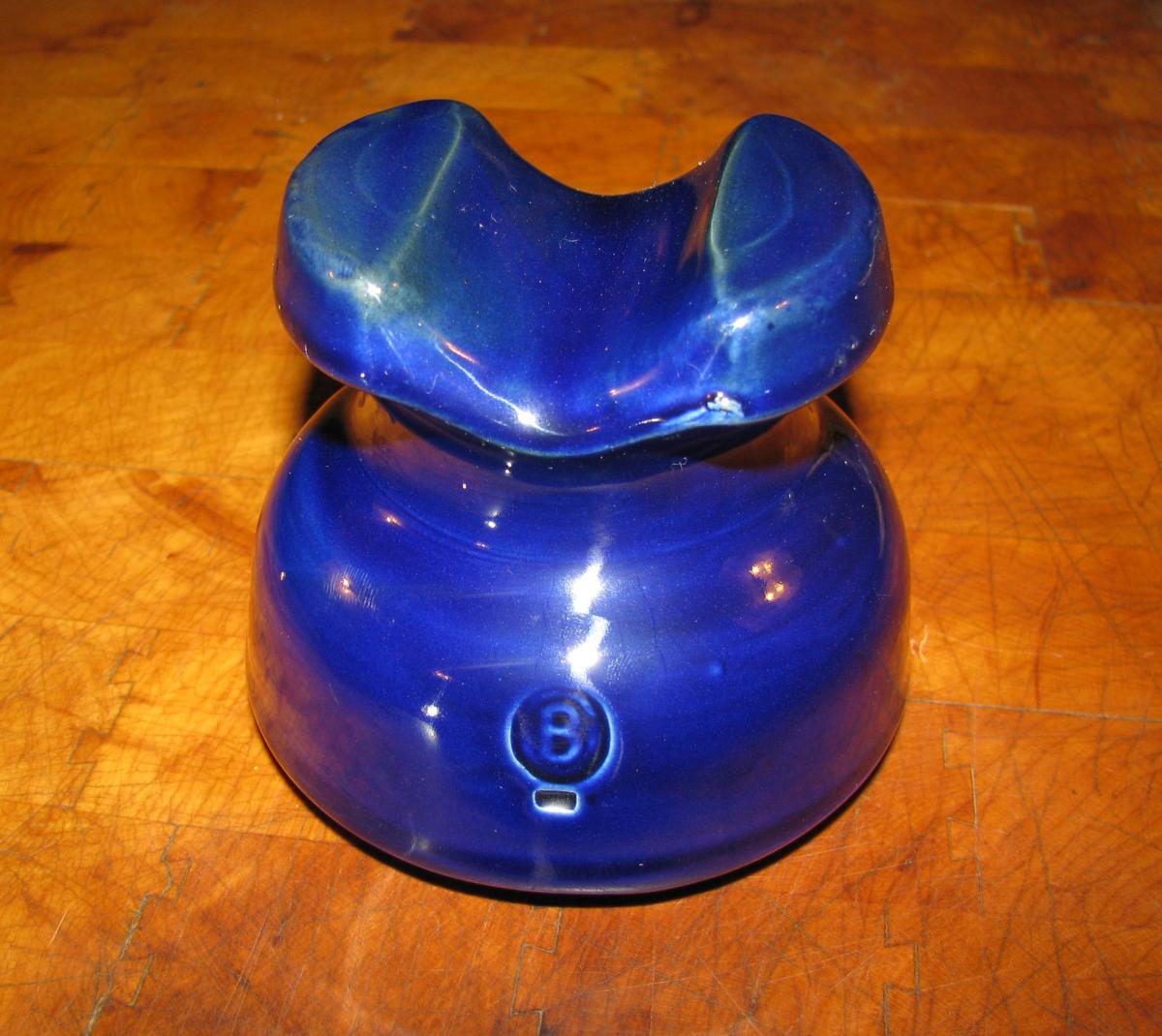 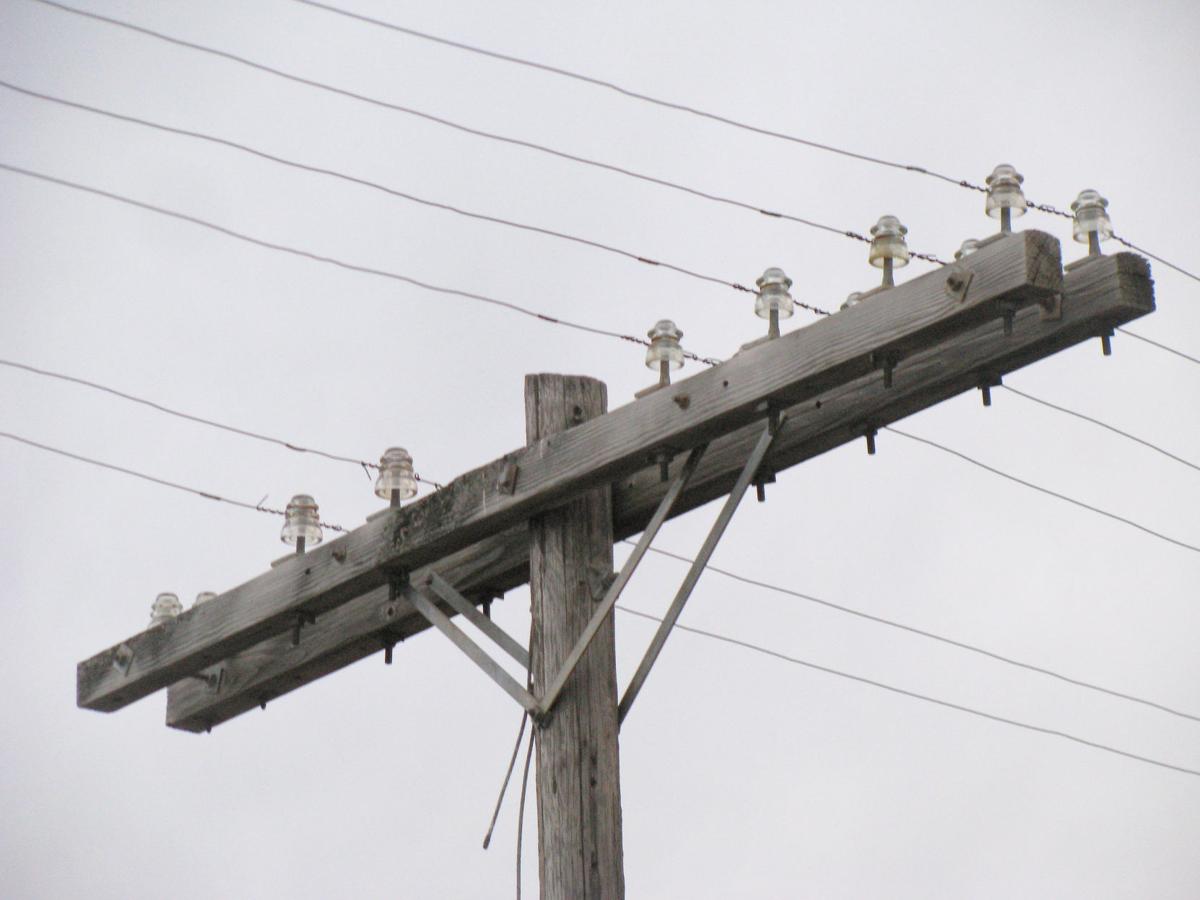 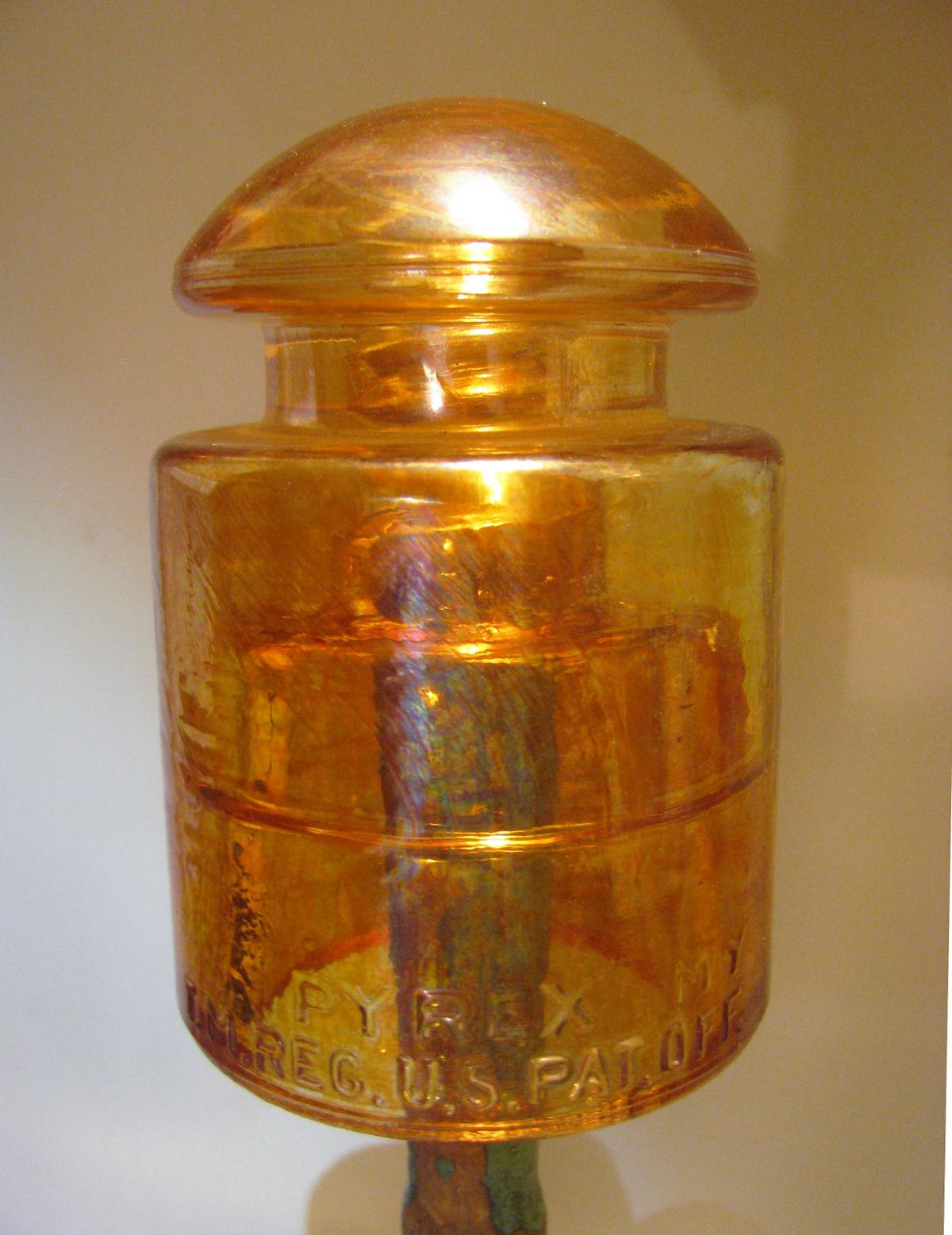 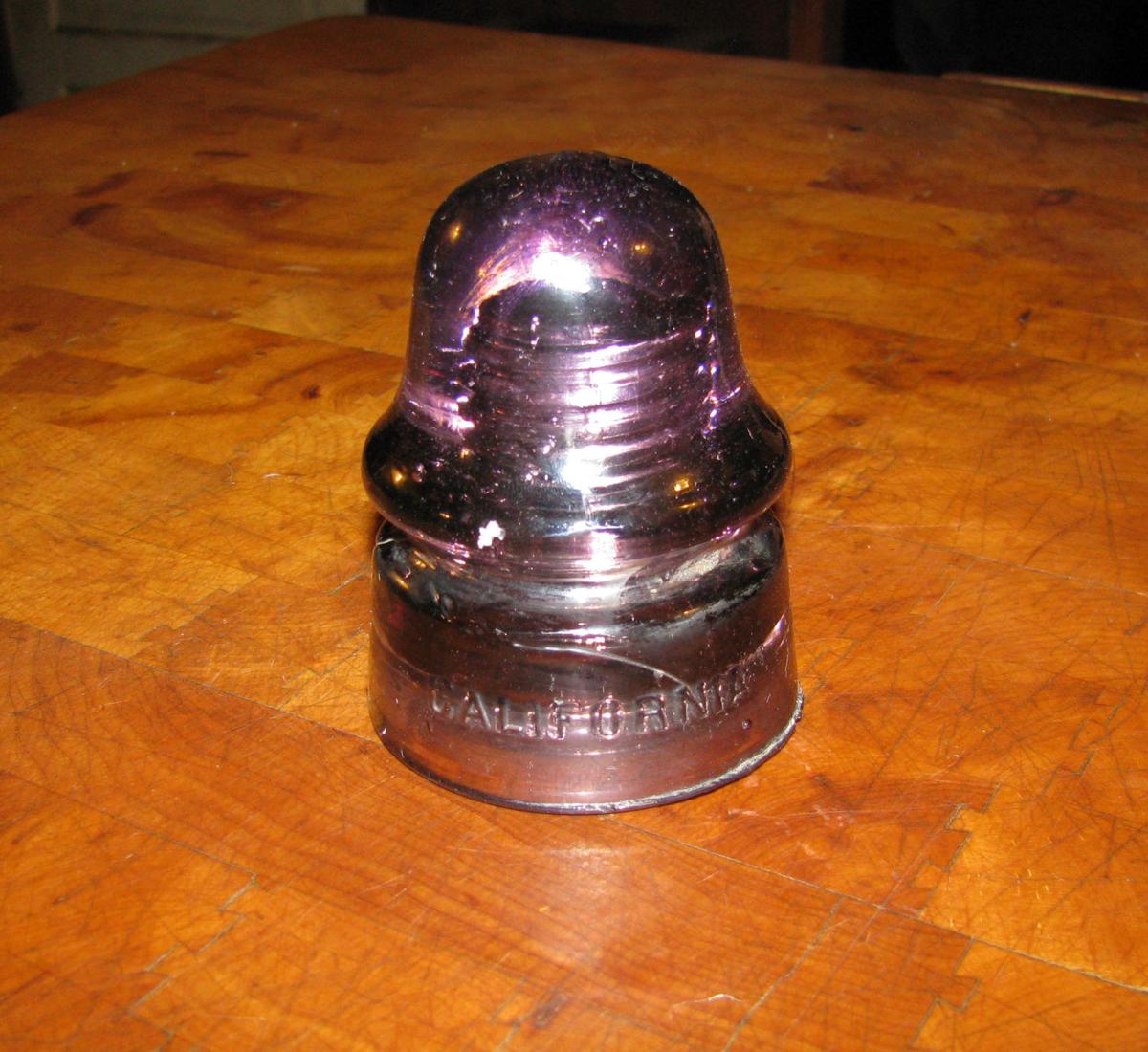 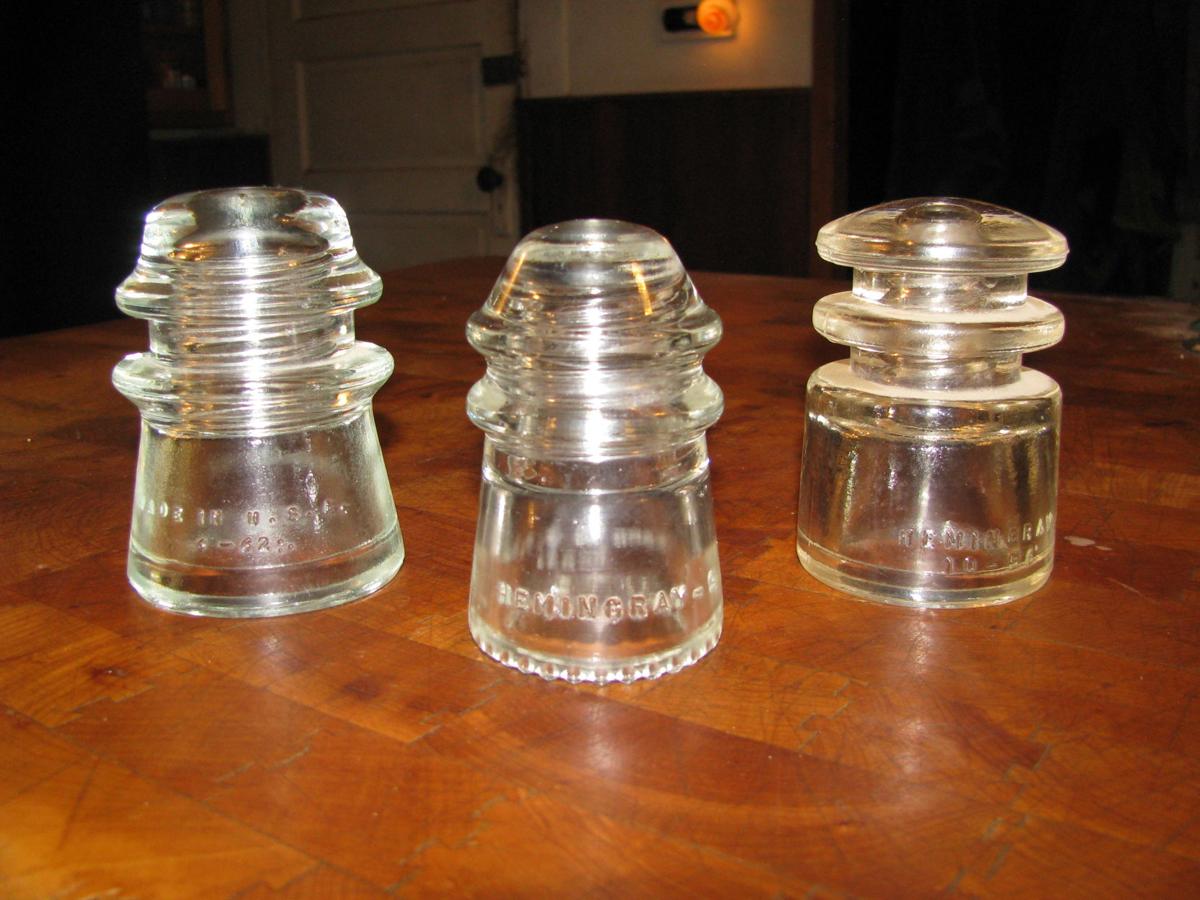 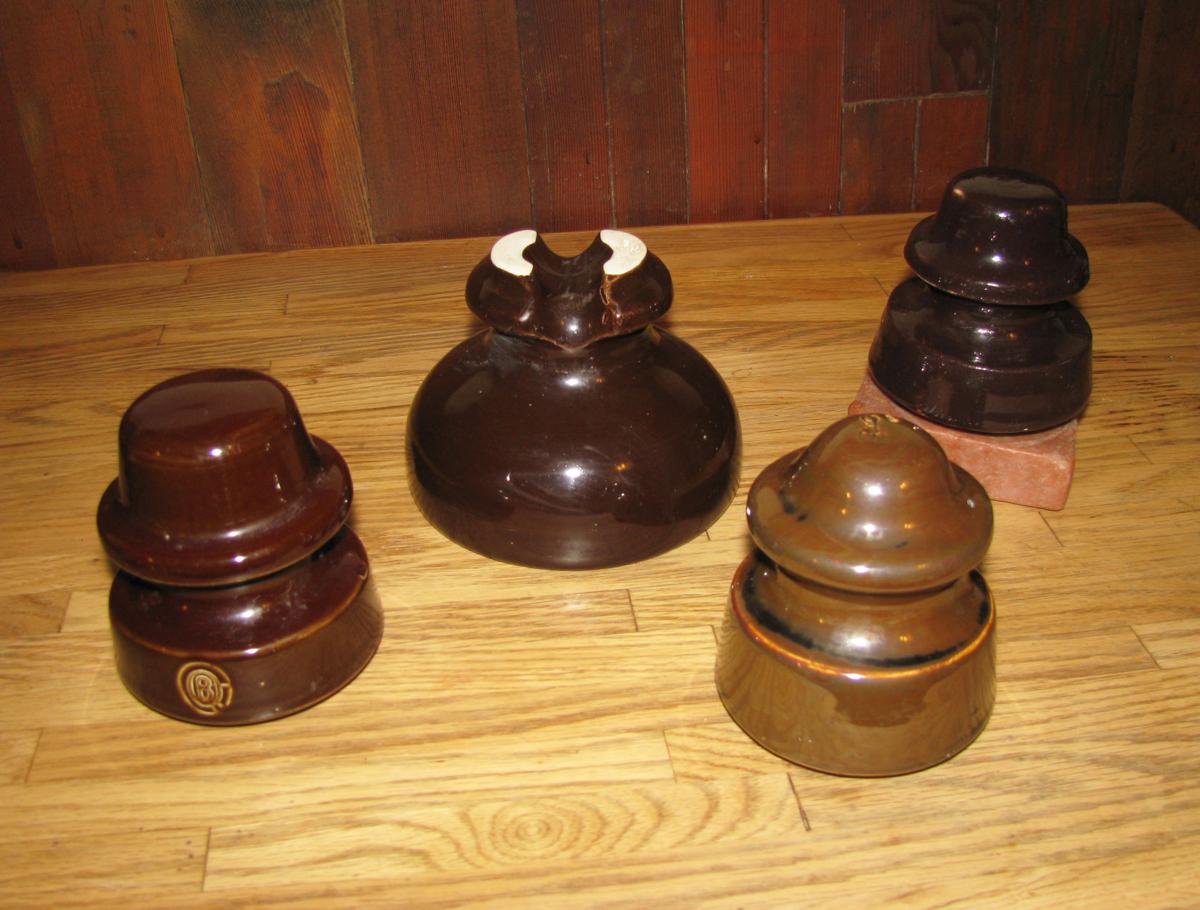 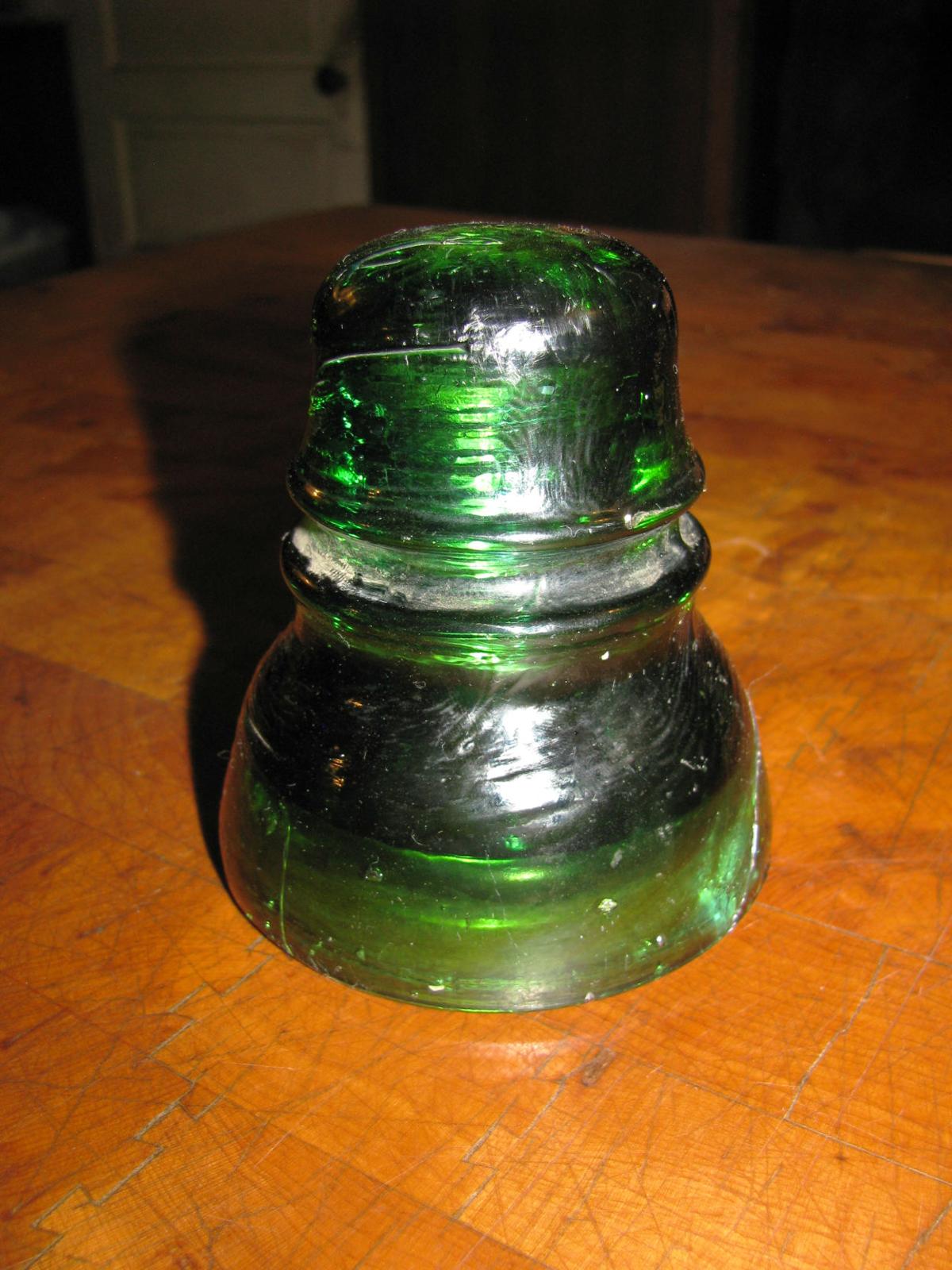 Occasionally you can run across heavy, rounded conical objects made of glass or porcelain that are about the size of large coffee mugs. These artifacts, each ringed with a big groove and with a threaded hole in the underside, are known as insulators and they date back to the early days of telegraph and telephone service.

Samuel Morse first demonstrated a working telegraph in the U.S. in 1838, and Alexander Graham Bell received his first patent for a working telephone in 1876. It was found that when directly attaching wires for these devices to wooden poles, however, too much electrical current was lost, especially when the wood was wet.

It was determined that a non-conductive material was needed to prevent current loss, and to insulate the wire from the poles, and glass insulators became the solution. They had first been used in conjunction with lightning rod systems that protected buildings from lightning strikes.

To attach the glass insulators to a pole or wooden cross arm, a tapered hole was molded into the underside of the insulator at the time it was cast. The insulators would then be mounted on wooden pegs or "pins."

As wires expanded and contracted with weather changes, however, the tension often caused insulators to lift off their pins. George Chauvet solved this problem in 1865 by putting a thread pattern in the tapered hole so they could be screwed down onto a threaded wooden pin. This design has been in use ever since.

The earliest insulators were mostly made of glass, because it was cheaper than those made from clay (porcelain or ceramic). Glass insulators were made at factories that manufactured other glass products, like canning jars, kerosene lamps, bottles, etc. Sometimes these factories would recycle leftover glass from other jobs so insulators could be found in a variety of colors.

The different colors, shapes and sizes of pin-type insulators gave rise to an amazing diversity of them — collectors have identified more than 9,000 variations. While telegraph systems used many insulators, it was the advent of the telephone that exponentially increased the need for them, and the Golden Age of glass insulators is generally considered to be between 1875 and 1930.

By the 1950s, ceramic insulators had become cheaper to manufacture and they proved more resilient to harsh weather conditions and strain, so they replaced the glass insulators. The remaining glass factories mostly closed in the 1960s, and by 1970 practically all new insulators were ceramic.

The old glass insulators, with their astounding variety of designs, attracted a certain kind of collector and it became a hobby that continues on in force today, with an estimated 2,500 of the most determined collectors.

Rare insulators made with unusual colors of glass command prices of hundreds or even thousands of dollars — a small assortment of them are valued at between $10,000 and $15,000, and one insulator reportedly sold for $20,000 in recent years.

The vast majority of glass insulators have almost no value, however, because they were produced in such quantities. There are still glass insulators "in the air," as collectors say, in the Tehachapi area, mounted on their crossarms up on poles. But they aren't the highly sought-after ones. Most are examples of the most popular glass insulator ever made, the Hemingray 42, which was made by the millions by the Hemingray Glass Company, the most prolific of all insulator factories. Most of the rarest insulators were made and used east of the Rockies.

Regardless of their value to collectors, insulators possess the inherent beauty of their colored glass when sunlight shines through them.

They are also interesting when you think about countless conversations that zipped past them through the wires they supported. From news about influential world events like great wars and new discoveries, to personal family milestones of births and deaths. Even mundane chatter between longtime friends and neighbors, or young sweethearts in hushed conversations, all passed by the old insulators up on their wooden perches. They did their job through all kinds of weather as the decades rolled by, until finally the insulators and the wires they held were rendered unnecessary by technology.