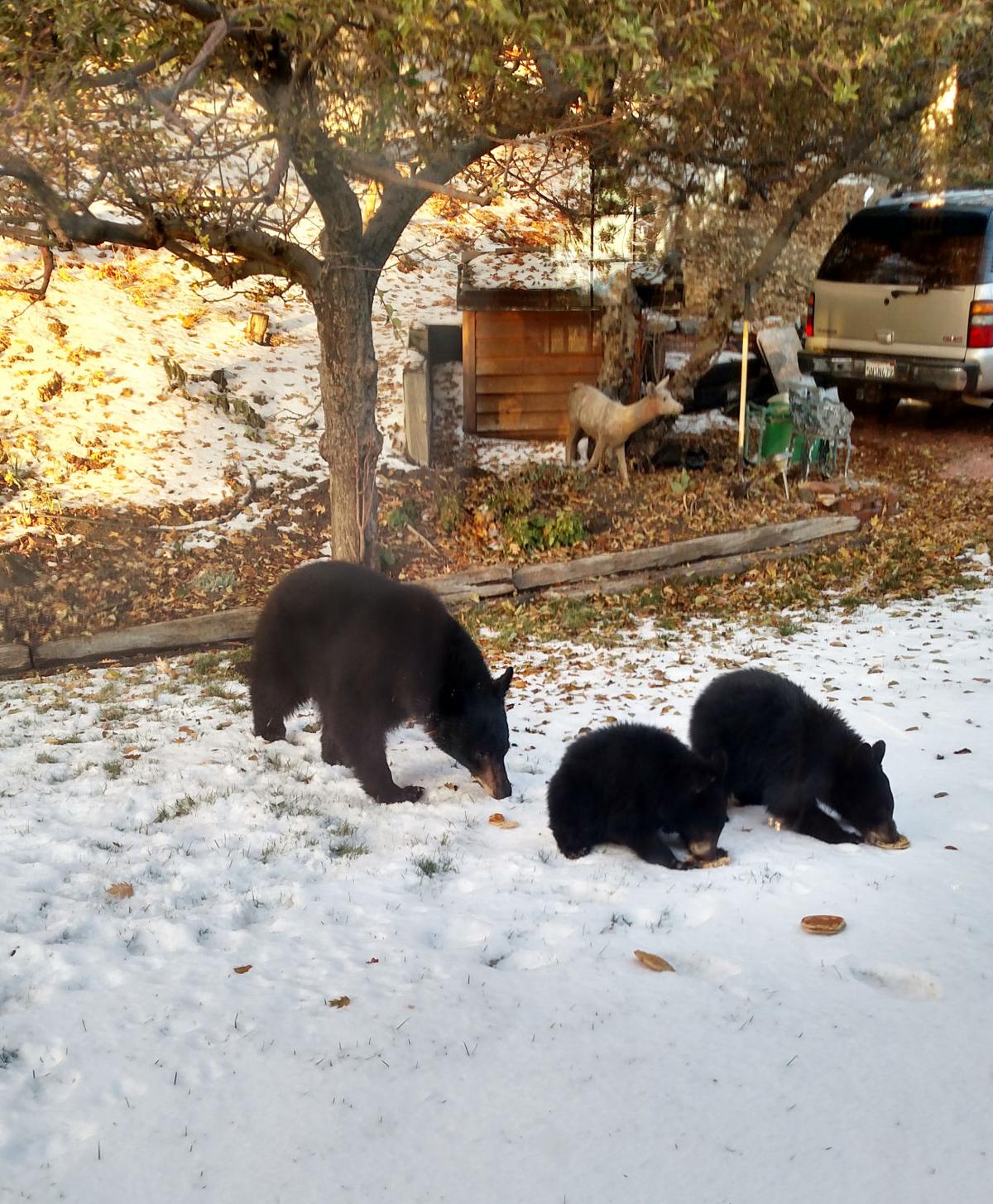 Mary Cunningham took this photo at her home in Bear Valley Springs of a sow California Black Bear and her cubs after a snowfall. 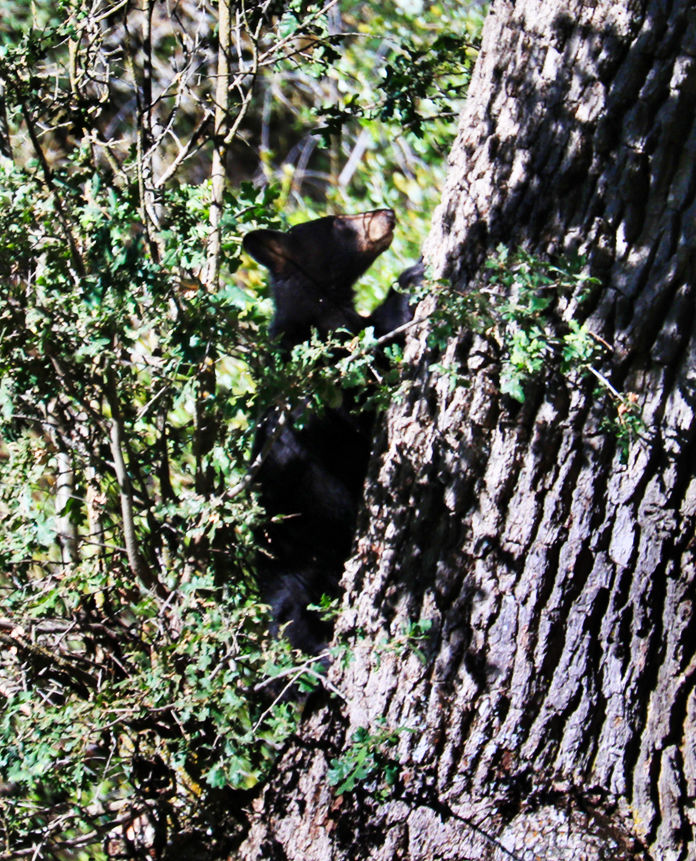 Toshimi Kristof took this photo of a black bear cub after it took refuge up in an oak tree. 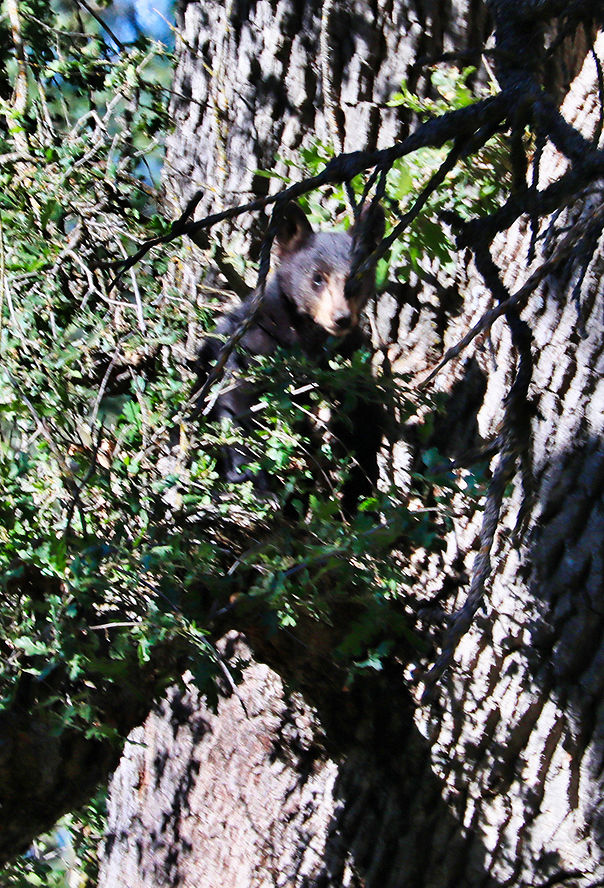 One of twin cubs sits in a massive oak tree while their mother forages below. 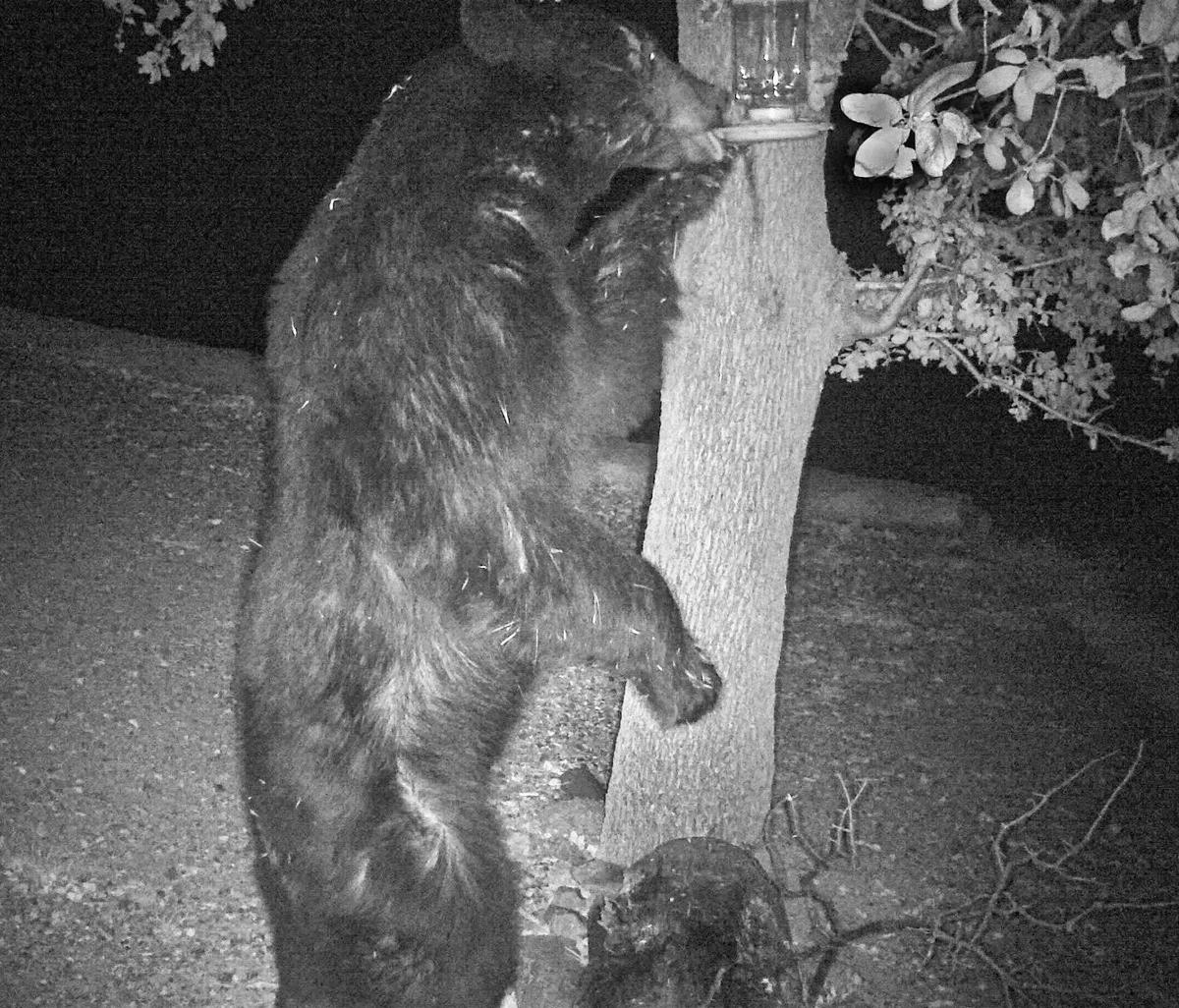 Mary Cunningham took this photo at her home in Bear Valley Springs of a sow California Black Bear and her cubs after a snowfall.

Toshimi Kristof took this photo of a black bear cub after it took refuge up in an oak tree.

One of twin cubs sits in a massive oak tree while their mother forages below.

There have been indications over the past few years that there is a growing population of bears in a place known, appropriately enough, as Bear Valley Springs.

Unknown to many, though, is the fact that the bears for which both Bear Mountain and Bear Valley were given their names in the 1850s were the fearsome but now extinct California Grizzly Bears (Ursus arctos californicus). These shaggy giants were once abundant in the Tehachapi Mountains and other parts of Kern County.

The bears that are now thriving in Bear Valley Springs and other local areas are California Black Bears (Ursus americanus californiensis), a subspecies of American Black Bear that was first recognized in 1900. This is the kind of black bear found throughout the Sierra Nevada, Tehachapi Mountains, Coast Range and other Southern California mountains.

California got its nickname as the "Bear State" from the now-vanished grizzlies, but it remains an appropriate moniker as California has the largest black bear population of any of the contiguous United States. A precise census is impossible, of course, but there are believed to be more than 30,000 black bears living within California's borders.

California allows seasonal black bear hunting in many areas, though the season is closed when 1,700 bears have been taken. In 2018, a total of 1,349 bear tags were validated. Successful hunters must present the bear skull to California Department of Fish and Wildlife authorities, who remove a premolar tooth for ongoing bear management studies. The hounding of bears by hunting dogs, which were used to chase bears up into trees, was permanently banned in California in January of 2013.

As bears in other parts of the state thrive, there definitely seem to be more black bears living in our area. They have never been absent from the Tehachapi Mountains, but there are more sightings of them these days than there were 20, 30 or 40 years ago.

In the past 50 years, black bears have more frequently been reported in the vicinity of Sand Canyon than any other local areas. Sand Canyon itself has only sparse housing and infrastructure, and it is adjacent to large tracts of undeveloped land to the north connecting it to the Piute Mountains and the Sierra Nevada.

Bears are now regularly sighted at Tehachapi Mountain Park, on a weekly or monthly basis, when in the past there were years at a time with no bear sightings. Homeowners in Bear Valley Springs now report seeing neighborhood bears routinely.

Some of this increase may be due to the California Department of Fish and Wildlife, who have at times reportedly relocated young bears to the Tehachapi Mountains. Other bears are part of the resident population or have moved in during natural dispersals. California's black bear population in general seems to be healthy and either stable or growing.

While known as American Black Bears, not all of these animals are truly black, especially in the West. Author Gary Brown in his book The Great Bear Almanac noted that while 100 percent of bears in New England, New York and Michigan were black, in Yosemite only 9 percent of the bears were black while the remaining 91 percent were brown or blonde.

I have seen and photographed bears in the Tehachapi Mountains that were brown like a chocolate Labrador or even lighter, like the sun-bleached hackle feathers of a golden eagle. In an old railroad tie fence post that was used as a bear scratching and marking pole in Sand Canyon, I've seen bear hairs that were as blonde as straw.

California Black Bear sows typically give birth to their cubs at a denning site in February. The babies, usually from one to three of them, can begin walking when they are about five weeks old, but are rarely seen until they are two or three months old. Cubs usually stay with their mother until they are about a year and a half old, and the sow doesn't become pregnant again during that time.

Black bears generally have a life expectancy of about 18 year in the wild, though they can of course live longer than that. The record confirmed lifespan for a wild black bear was 39 years.

The Tehachapi Mountains were one of the few places in California that once had populations of both grizzlies and black bears — there are words in the Nuwä (Kawaiisu or Paiute) language for both black bears (odo'kid mo'orizh) and grizzly (po-git).

The grizzlies are gone, though there have been studies regarding the feasibility of reintroducing some Rocky Mountain Grizzly Bears into the remotest parts of California.

The number of California Black Bears in our area appears to be increasing. Enjoy observing them from a safe distance if you happen to encounter them, and remember that they are wild and potentially dangerous animals who may behave unpredictably. They generally flee from human contact.

Unlike the Antelope Valley, which has no antelope since the last big herd was shot into oblivion in the 1880s, the beautiful Bear Valley and Bear Mountain still have bears.