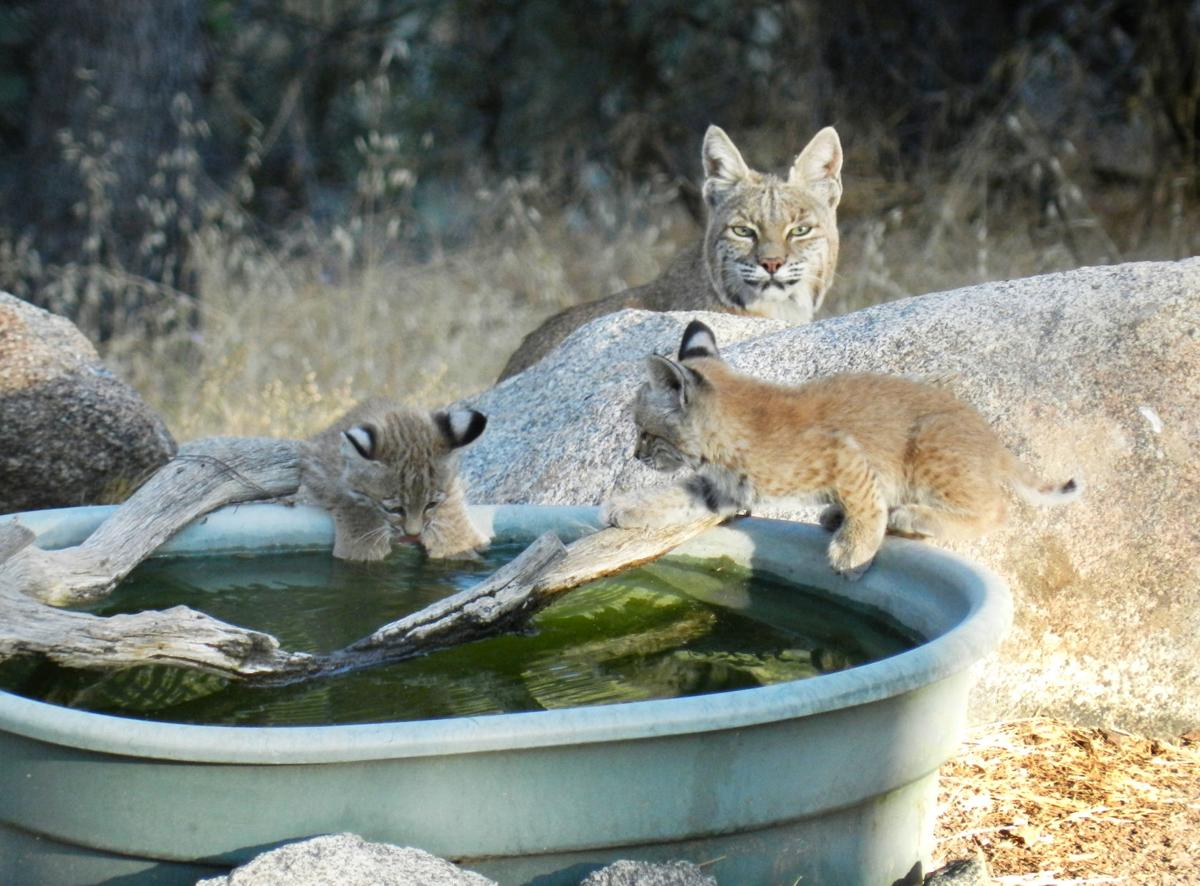 This mother Bobcat and her two kittens recently stopped by for a drink at Joe and Patty Yuele's home in Bear Valley Springs. 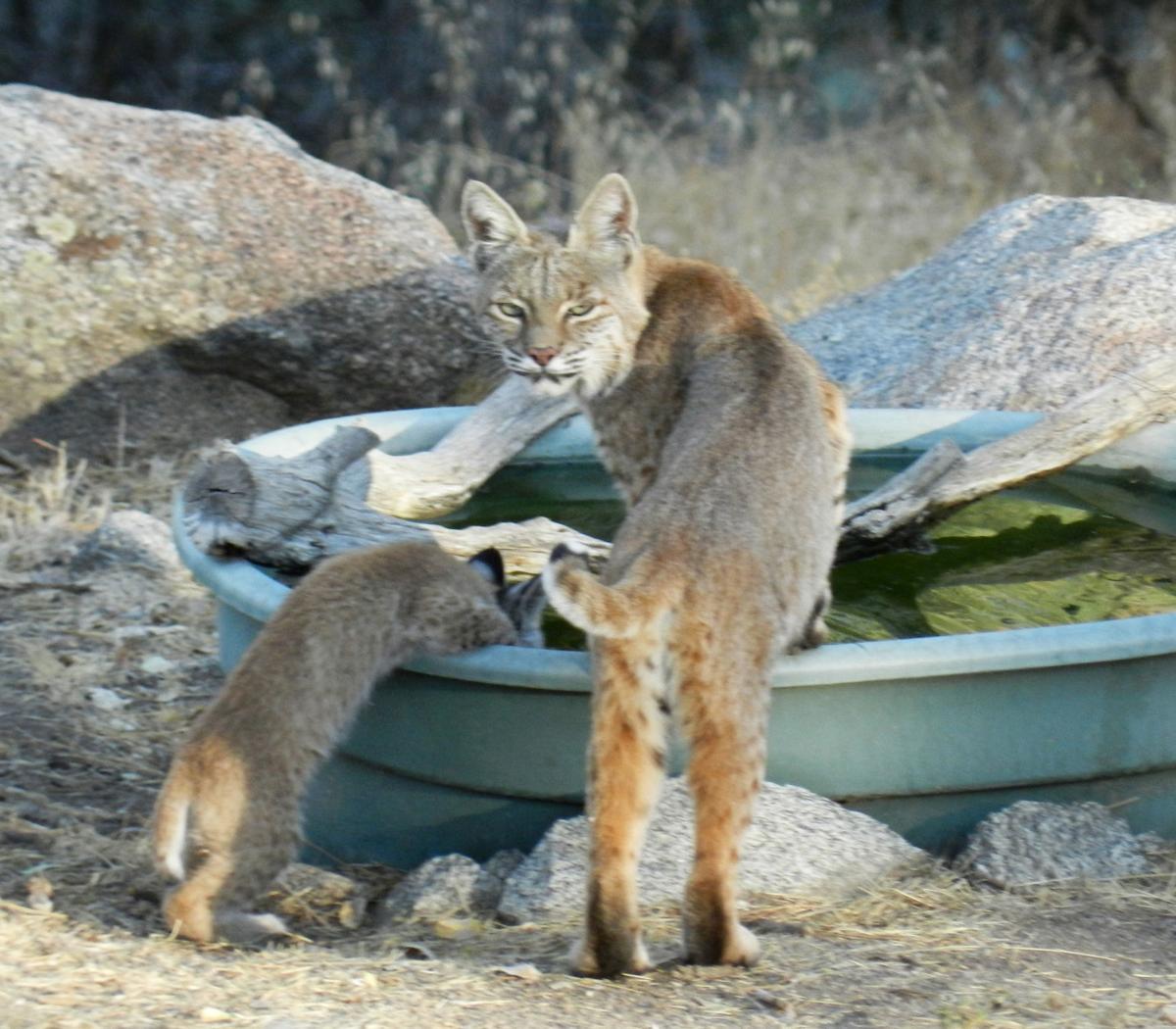 Though they are smaller than the males, female Bobcats are tireless hunters and good providers for their kittens. 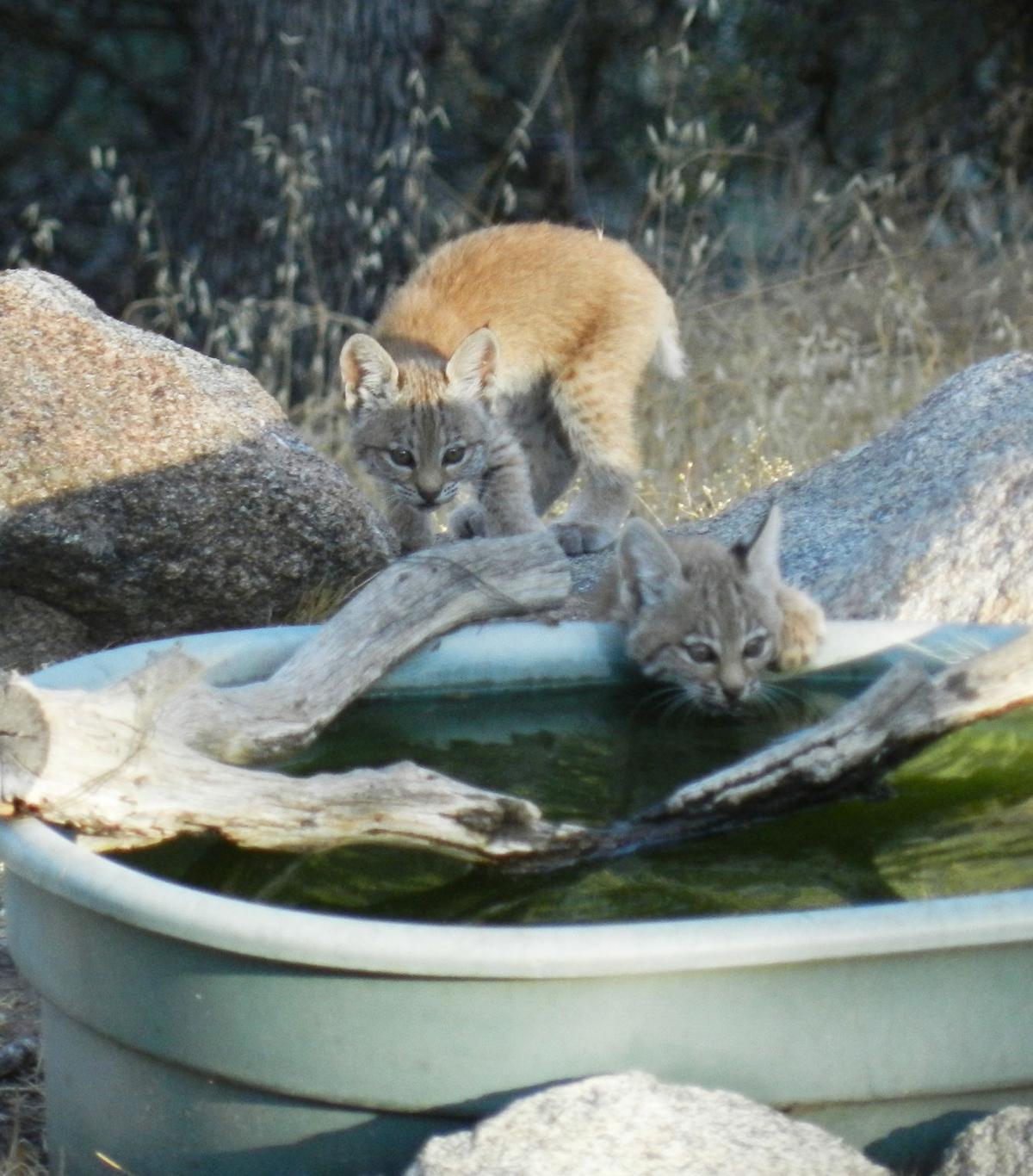 Exploring their world begins when Bobcat kittens are only about a month old. These ones are probably three or four months old.

This mother Bobcat and her two kittens recently stopped by for a drink at Joe and Patty Yuele's home in Bear Valley Springs.

Though they are smaller than the males, female Bobcats are tireless hunters and good providers for their kittens.

Exploring their world begins when Bobcat kittens are only about a month old. These ones are probably three or four months old.

One of the most widespread predators in the Tehachapi Mountains is small, tough, adaptable and capable of living in close proximity to people and houses. The Nuwä (Kawaiisu or Paiute) word for it is tüküüts, pronounced tuh-kuhts. Today it is known as the Bobcat.

These secretive but common animals walk softly on their cat feet and frequently move through their habitat unseen by human eyes.

Bobcats (Lynx rufus) are frequently mistaken for their much larger relatives, the Canada Lynx. I get questions from time to time about Lynx in the Tehachapi Mountains. However, while they are both in the Lynx genus and can actually hybridize, Lynx are not known to live in California. The only confirmed Lynx I have seen or known about in the Tehachapi area belonged to my dear friend Dorrie Walsh, also known as Dorrie the Groomer.

One of the keys to the success of Bobcats is the fact that they are generalists who will take a variety of prey. Their preference is rabbits, and in our area they stalk both cottontail rabbits and jackrabbits. However, they will also hunt many different rodents, including gophers, mice, rats, and young ground squirrels, as well as birds, insects, eggs and reptiles.

Bobcats will also attack larger animals if food is scarce, and have been known to prey on livestock and poultry. In the case of chickens, they are usually much more sparing than other predators: animals like raccoons and domestic dogs will get in a chicken coop and kill a dozen birds or more; a Bobcat usually takes one chicken and disappears.

Bobcats on occasion can take a deer, though it is rare. They will also eat carrion if hungry, but cat digestive systems are not as versatile as some animals and they eat almost exclusively meat, unlike coyotes, raccoons, bears and other predators that eat a wide range of berries, fruit and other plant material.

Like most cats, the raising of young is done entirely by females with no help from the males. Mother Bobcats select a hidden den site, typically in a boulder pile or hollow tree trunk, and after a two-month gestation give birth to two to four babies.

The kittens eyes open after about 10 days, and they begin to explore when they are about a month old. In addition to nursing, Bobcat mothers do lots of hunting for their growing babies, and bring small prey animals back to their den. The kittens start going with their mother when they are about three months old.

While Bobcats can go for days without eating if food is hard to find, they generally like to drink daily, so some dependable water source is a must for them. Many sightings of Bobcats occur when they visit watering holes.

Over the years my friend Joe Yuele has contributed wonderful photographs of Bobcats and other animals that visit a water tub that Joe and his wife Patty keep at their Bear Valley Springs home. In addition to Bobcats, the Yueles have seen and photographed foxes, bears, mountain lions, deer and other creatures that come to drink at the water source that Yueles have helpfully provided for their animal neighbors for about the past seven years.

The mother Bobcat and her kittens pictured on this page just appeared recently at the Yueles' home. This late in the year, it may be a second litter for the female. Kittens born this late will probably stay with their mother until next spring, when they disperse to make their own way in the world.

Although adult Bobcats have few predators, they can be killed by coyotes and mountain lions. Bobcat kittens are more vulnerable, and are frequently preyed upon by great-horned owls and golden eagles.

Bobcats are an integral part of the food web in the Tehachapi Mountains, and there are hundreds of them spread throughout our part of Kern County. Keep alert for them, especially in the twilight hours, and you are likely to have a fleeting encounter with one of these elusive hunters.