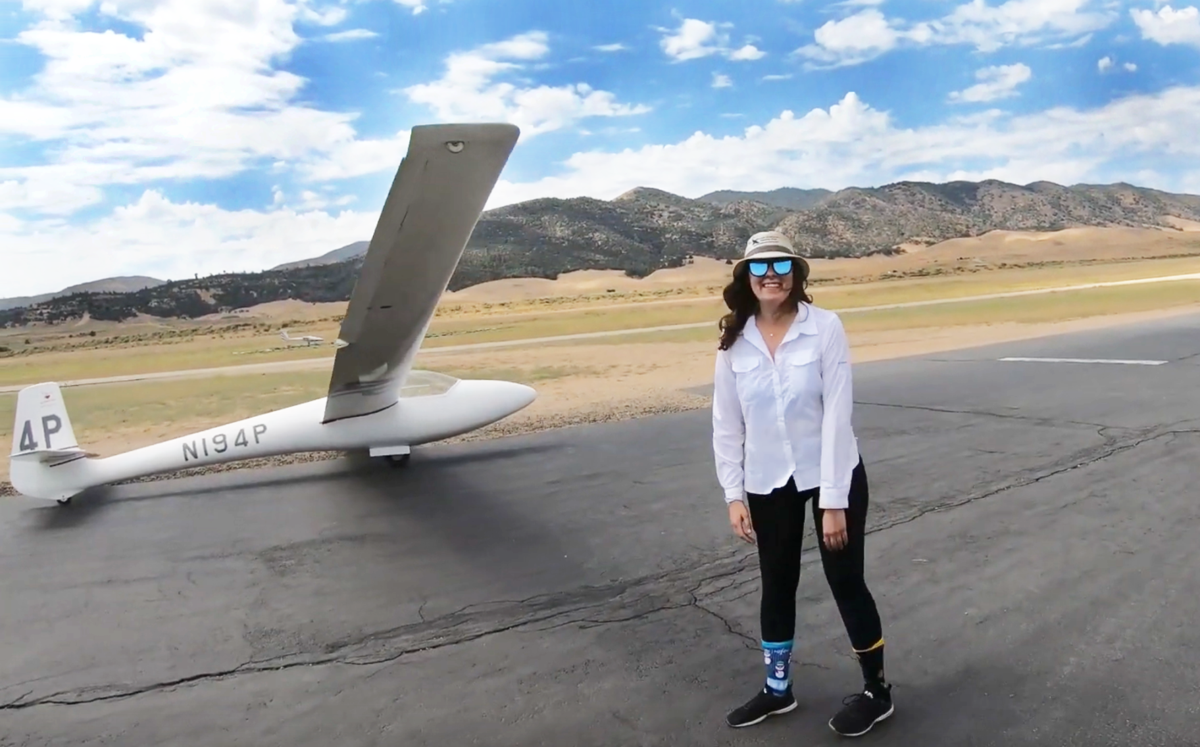 Jenn Bauman is a Tehachapi sailplane pilot who recently had the incredible experience of flying with two California Condors for nearly 10 minutes. 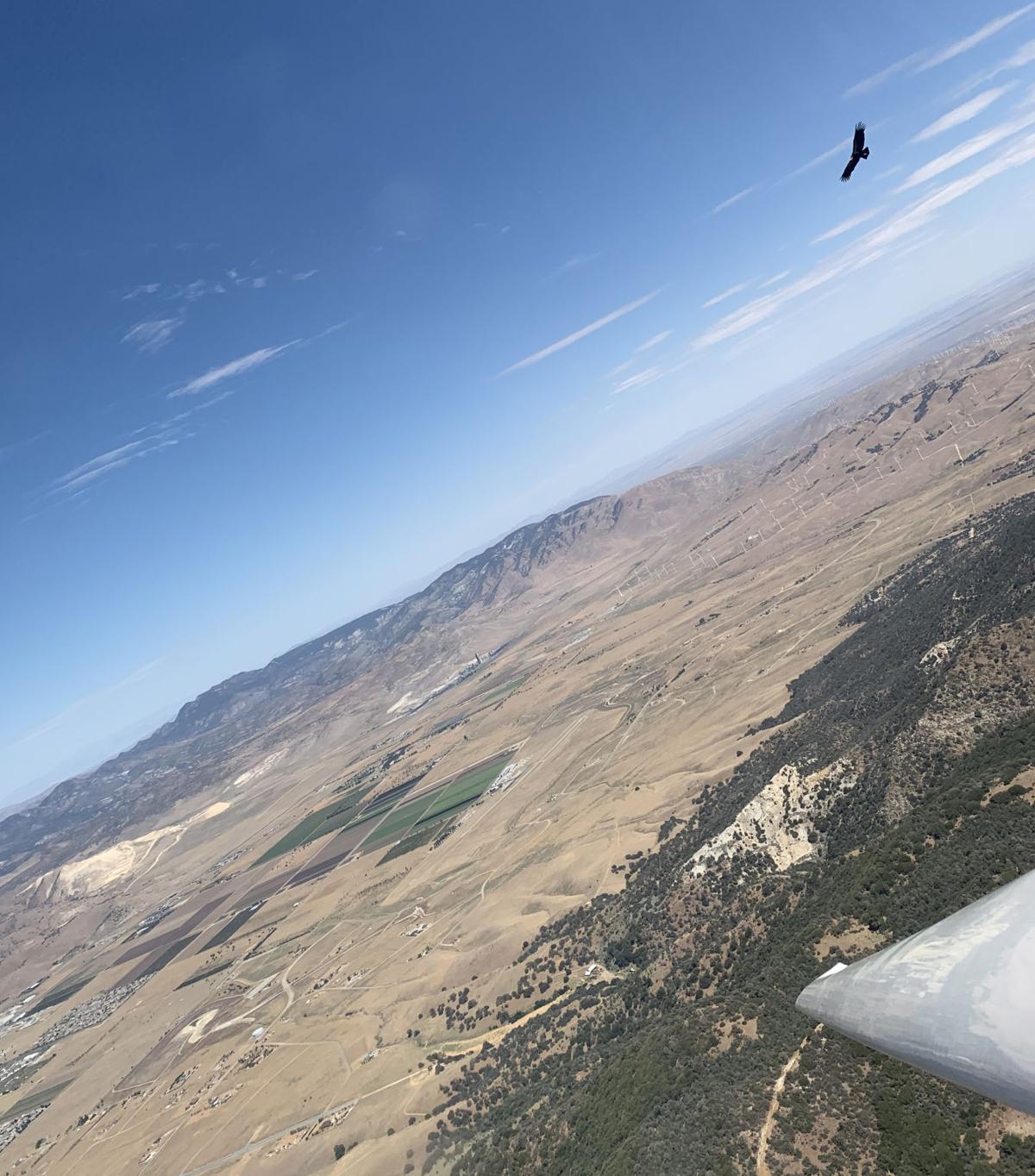 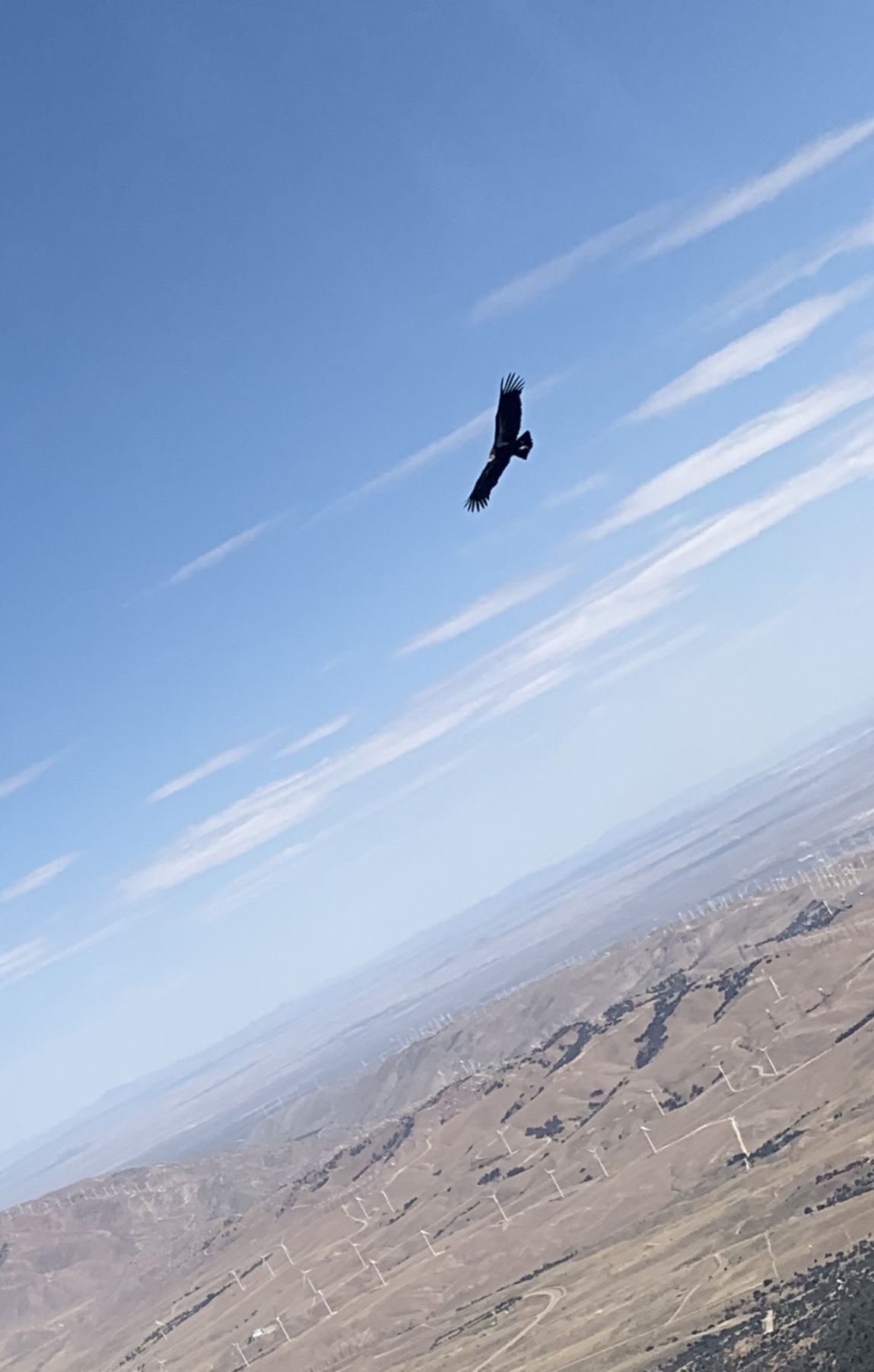 Wind turbines on hills in the Tehachapi Mountains are visible under this graceful California Condor. 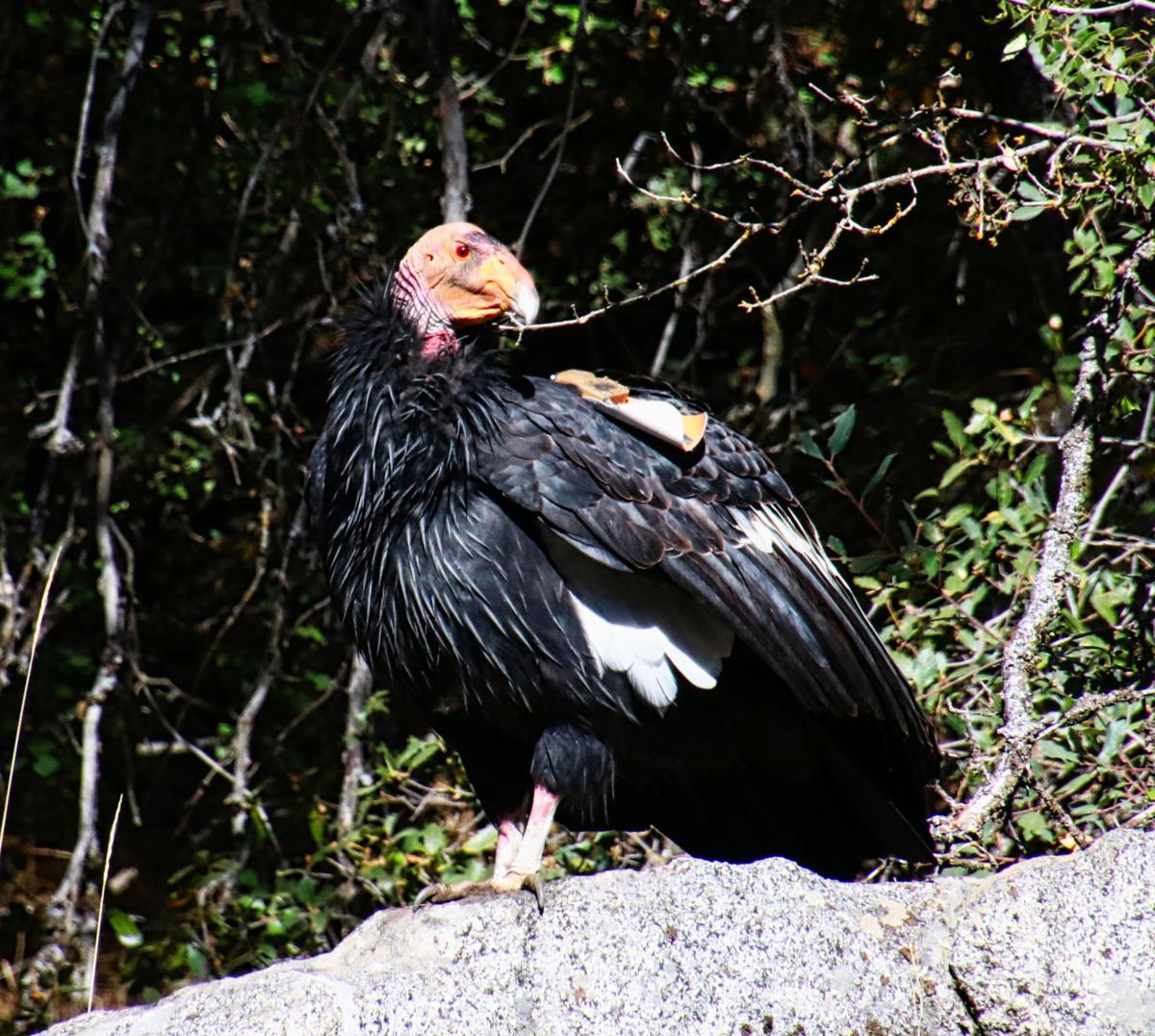 Toshimi Kristof and her husband, Les, encountered this female condor not once but twice in Bear Valley Springs recently on two different days.

Jenn Bauman is a Tehachapi sailplane pilot who recently had the incredible experience of flying with two California Condors for nearly 10 minutes.

Wind turbines on hills in the Tehachapi Mountains are visible under this graceful California Condor.

Toshimi Kristof and her husband, Les, encountered this female condor not once but twice in Bear Valley Springs recently on two different days.

With the increasing numbers of the recovering California Condor, more and more local people are getting to see these magnificent birds with a nine-foot wingspan. Many people have now seen them, but very few have ever flown with them. Tehachapi resident Jenn Bauman recently got to do just that.

Jenn is a sailplane pilot who flies out of Larry and Jane Barrett's Mountain Valley Airport. Jenn explains that in early September, she had this remarkable experience: "I was flying a sailplane over the Stallion Springs area and came across two gigantic birds, which I realized were condors. We were circling in the same rising air and they hung out with me for about eight minutes. They seemed very curious about me in the glider and were flying very close to me. I was able to take some pictures of them with my phone."

Jenn was naturally mesmerized by the experience, and it represents a highlight in the sport of soaring for this enthusiastic sailplane pilot, who works in the aviation industry.

"I moved here in 2017, right after I graduated college to work as an engineer with one of the companies at Mojave Air and Space Port," Jenn said, "I’ve been soaring since 2015, and this summer I’ve been borrowing a 201 Libelle sailplane that belongs to an awesome pilot named Kathy Fosha. She is an amazing glider pilot and is on the women’s national team and will go to represent the U.S. in the women’s world soaring competition in Australia this year."

While a growing number of Tehachapi residents encounter California Condors occasionally, it was a magical first time for Jenn: "I’ve been fascinated by condors since I started flying sailplanes, as they are the masters of soaring! I had never actually seen one in person, but I’ve read about them online a lot and watched videos; that’s why I was able to identify them. I had heard of glider pilots flying with them, but knew it was a very rare occurrence and didn’t think I’d be so lucky."

"When I flew with them I was in the 201 Libelle, which is a single place ship, so it was just me and the condors! I have had the privilege to fly with ravens, turkey vultures, and a golden eagle in thermals before this, but none of them were as stable and elegant flying as the condors. Truly captivating and magnificent. I feel so fortunate," Jenn concluded.

Pilots flying out of Mountain Valley Airport never know when they might happen to share air space with one of the largest, rarest and oldest bird species in North America. Ron Martin, a tow plane pilot at Mountain Valley, told me he had a rendezvous with a condor at 2,000 feet just a couple of days ago.

When I was a kid growing up in Tehachapi in the 1970s and 1980s, hardly a living person had seen a California Condor, especially during the past few decades. They were more legend than fact, like black winged unicorns. . .

I am so happy that is no longer the case, and the odds of seeing these oversized birds in the Tehachapi Mountains get better by the year. I hope the day comes when Jenn's experience of soaring with them is more of a regular occurrence than a rarity.