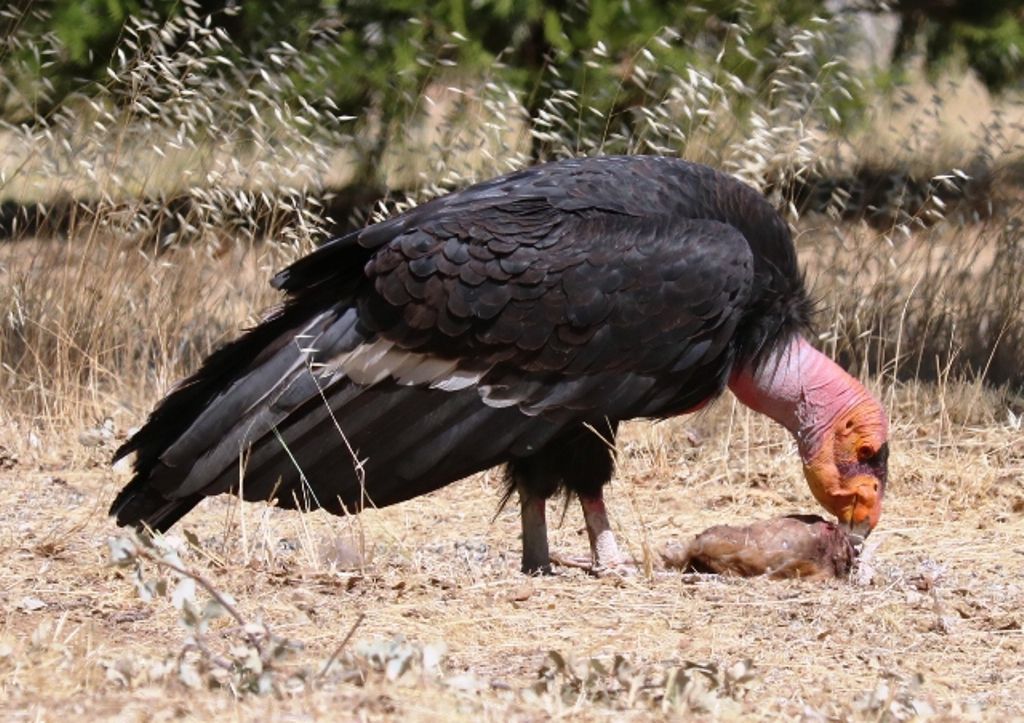 A California Condor feeds on carrion in the Tehachapi Mountains last week. 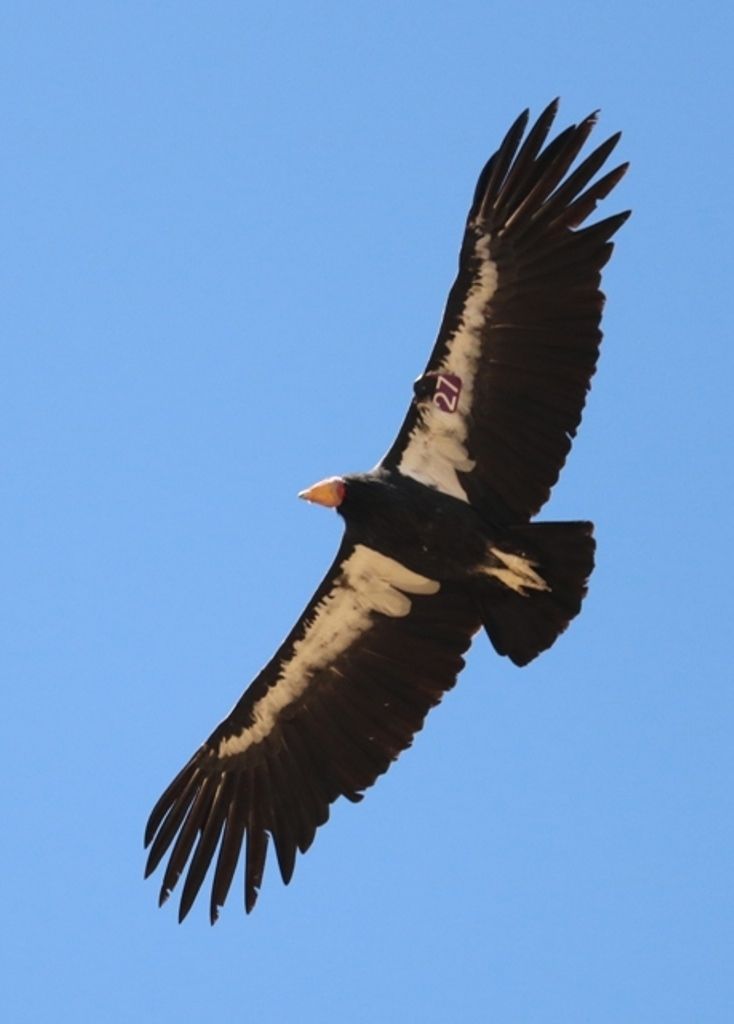 Seen from below, California Condors have beautiful white patches on the underside of their wings. 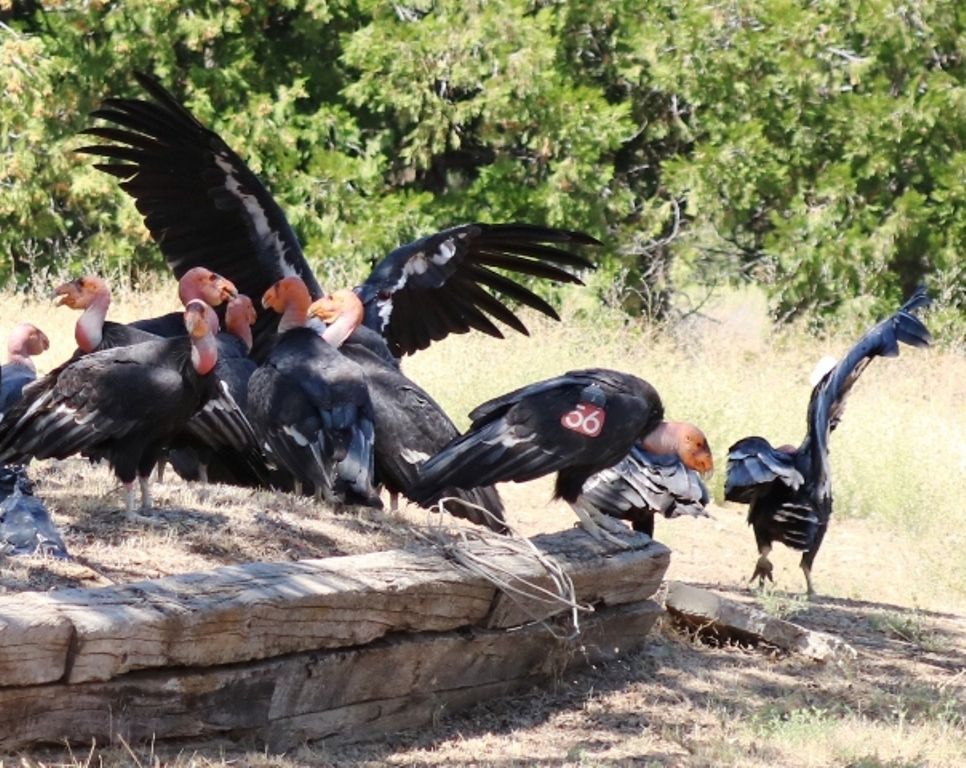 California Condors are gregarious birds who have shown the ability to recognize individuals. They are almost entirely silent, except for hissing and grunting noises. 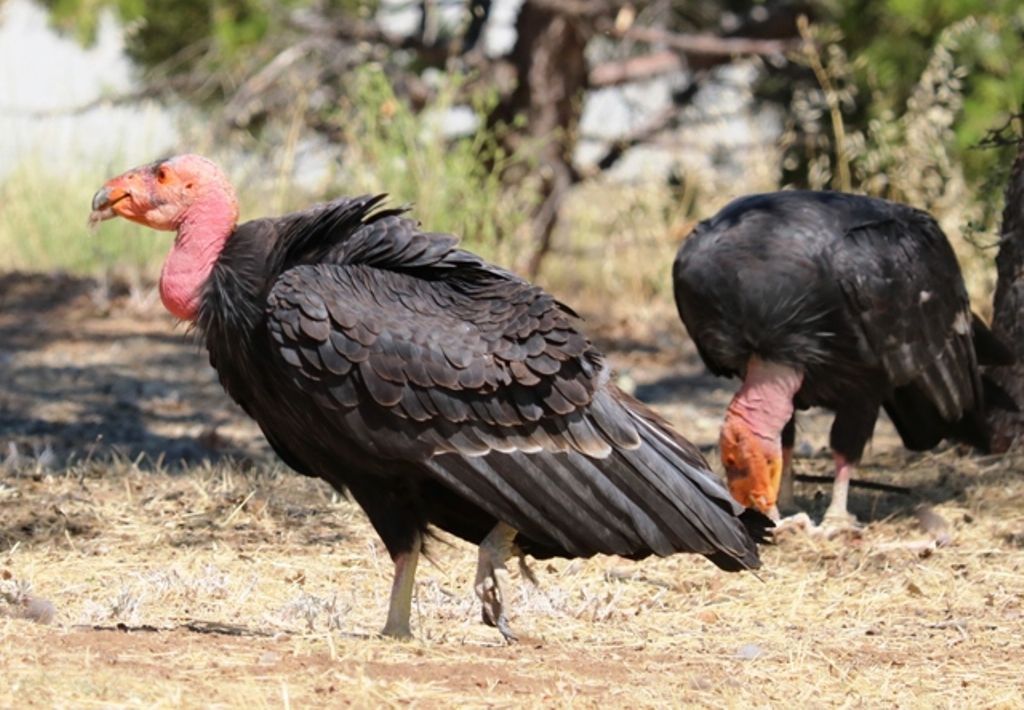 Unlike Turkey Vultures, Condors have heads that are orangish-yellow, rather than red. Their necks are often pink.

A California Condor feeds on carrion in the Tehachapi Mountains last week.

Seen from below, California Condors have beautiful white patches on the underside of their wings.

California Condors are gregarious birds who have shown the ability to recognize individuals. They are almost entirely silent, except for hissing and grunting noises.

Unlike Turkey Vultures, Condors have heads that are orangish-yellow, rather than red. Their necks are often pink.

Tehachapi area residents see California Condors (Gymnogyps californianus) on a weekly basis. Ranging from a few birds soaring to more than 30 individual Condors gathered together on the ground, wild Condor sightings are a common appearance in the Tehachapi area — perhaps more so here, with more regularity, than anywhere else on the planet.

California Condors are the largest wild birds in North America, with wingspans that exceed nine feet. Adults can weigh more than 20 pounds. They were once widespread throughout what is now the U.S., feeding on the carcasses of land mammals as well as sea mammals like sea lions and whales. Condor bones have been found in Florida, and the Lewis and Clark Expedition of 1804 encountered Condors in what is now Washington and Oregon.

However, the California Condor population experienced a longtime decline that has lasted most of the past 200 years, from habitat loss, shooting, lead poisoning, egg collecting, etc. In the 1950s, '60s, '70s and '80s, many of the rare Condor sightings took place in the Tehachapi Mountains. Cowboys on the Tejon Ranch and other people in remote Tehachapi Mountains locations would catch sight of these big dark ghosts from time to time.

Finally by 1987, all of the last remaining Condors were captured in a last-ditch attempt to save these magnificent birds from soaring into extinction. I'm old enough to remember that time, and the fact that it was somewhat controversial — there were some passionate environmentalists who advocated allowing Condors "to go extinct with dignity" rather than engage in a potentially unsuccessful captive breeding effort.

Thankfully, those voices of pessimism were heard but overridden, and a triumphant captive breeding program involving many partners and overseen by the U.S. Fish and Wildlife Service has been restoring Condor numbers year after year.

The latest figures from the California Condor Recovery Program are from 2018 and list a total world population of 488 birds, with 312 in the wild and 176 in captivity. With additional chicks fledging this year in 2019, however, it is highly likely that the population now exceeds 500 California Condors.

The biggest obstacle to a faster recovery has been the continued loss of birds to lead poisoning, primarily from lead fragments left in carcasses and gut piles that the Condors feed upon. There have been 83 documented deaths of California Condors due to lead poisoning since 1992. Many of the additional 86 birds that disappeared in the wild and were not found may have also died from lead poisoning.

Hopefully this threat should recede now, since from July 1, 2019 onward, nonlead ammunition is required when taking any wildlife with a firearm anywhere in California. This is the final phase-in of a bill that was first passed in 2013.

The photos on this page were taken by longtime Tehachapi resident Mary Dufrain. She and her husband Mark were heading home last week when they spotted condors near the intersection of Water Canyon and Highline Roads. They noticed one seemed to be coming down so they followed it and that bird brought them to a large group of birds on the ground. "They were distracted by their antics so I was able to get some nice shots," Mary explained.

Mary has been a wildlife and nature photographer since she was 10 years old. "I've loved and photographed Tehachapi since the early 1980s," she says. "I love the surprise opportunities of my natural sightings and sharing those surprises when I can. I love Tehachapi and like to show it off." I have seen many of Mary's photos over the years, and they are extraordinary.

The chances of seeing free-flying California Condors in the Tehachapi Mountains are pretty good, and getting better by the year. Humans were responsible for the near-extinction of Condors, and it is gratifying that humans have been so successful at recovering the survival prospects of these enormous soaring birds.