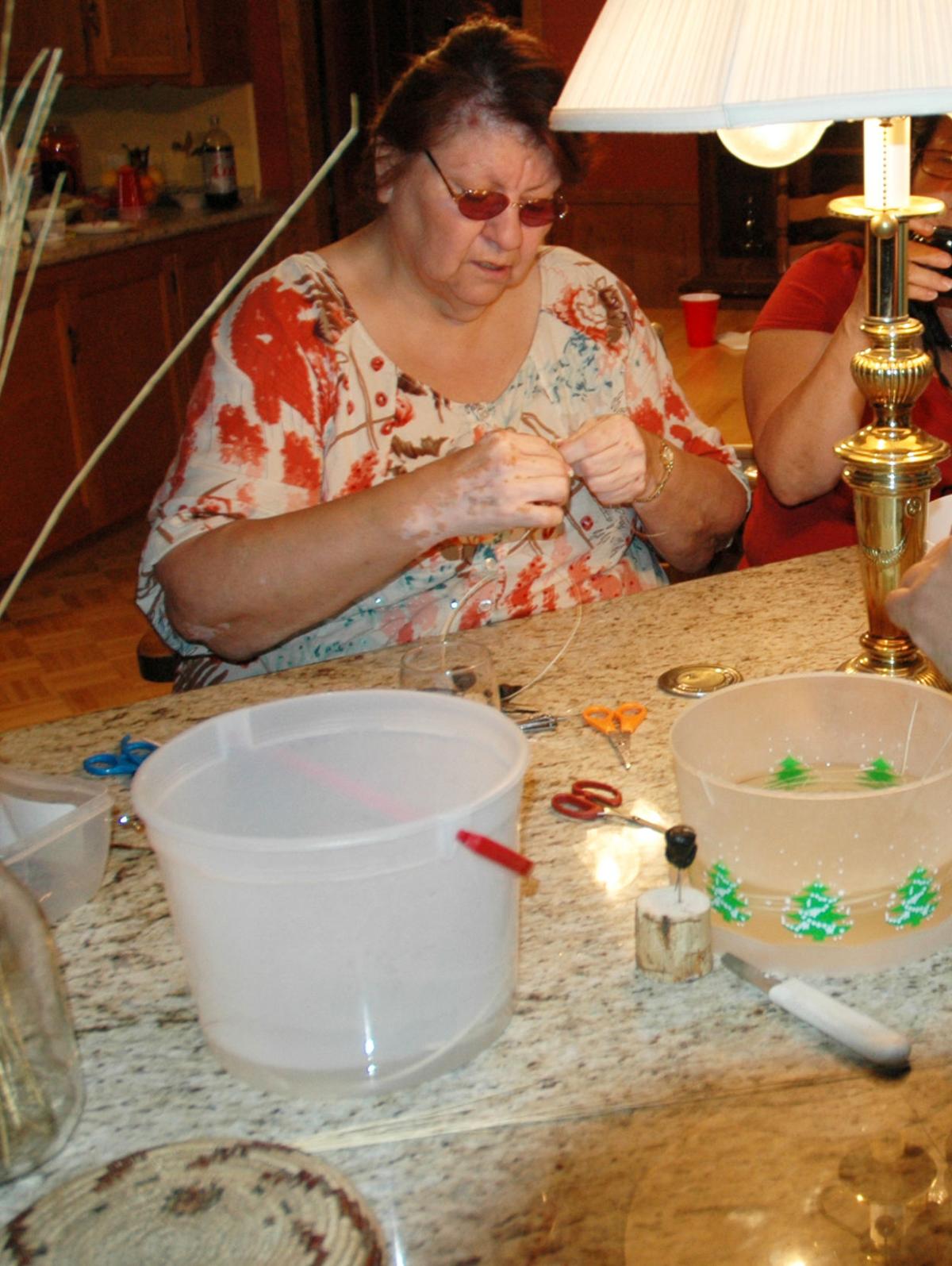 Janice working on a basket start. 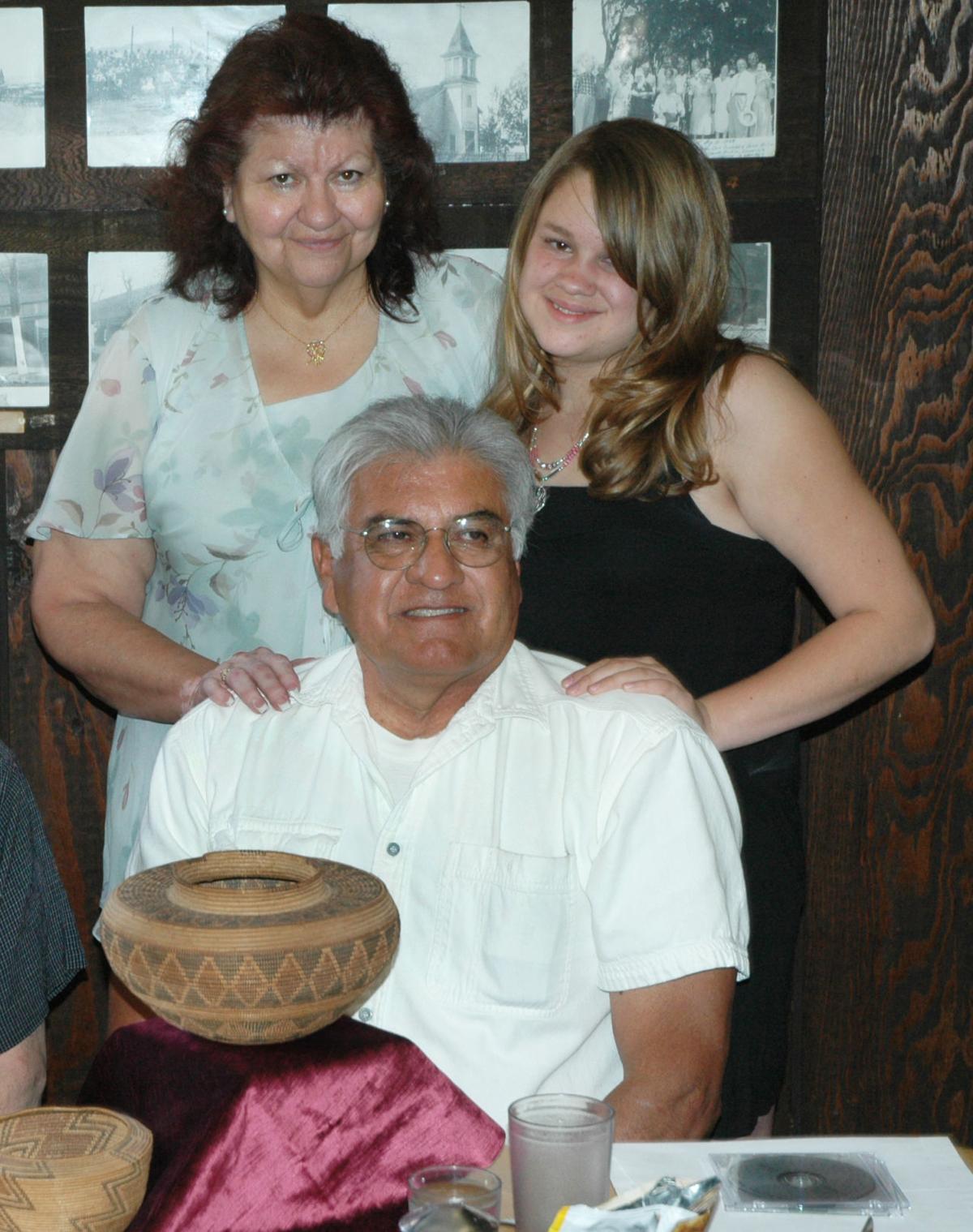 Janice Williams with her late brother Harold Williams and her niece Ronneigh Quiroga, along with a basket made by her grandmother, which was gifted back to the Williams by the Geldman family. 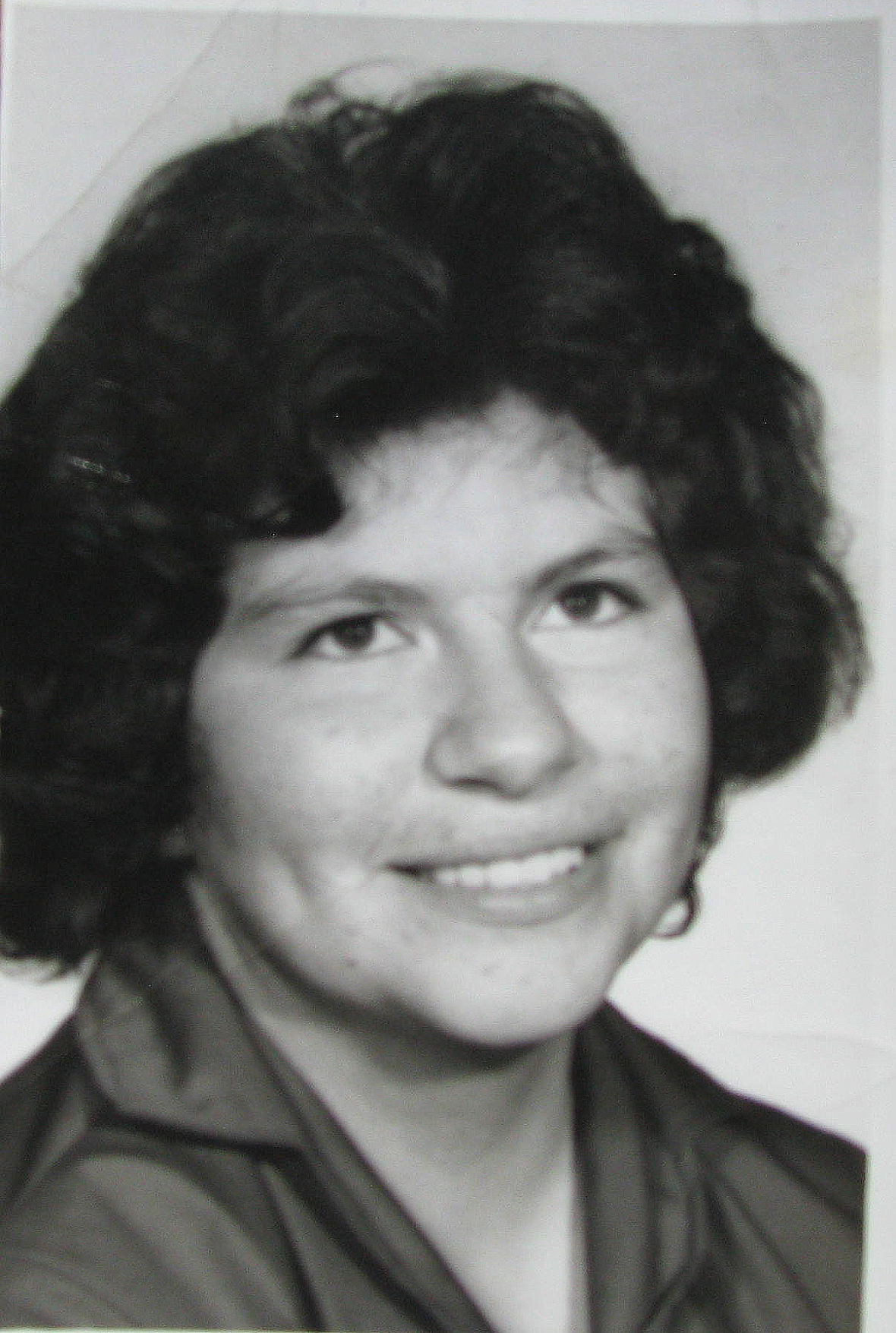 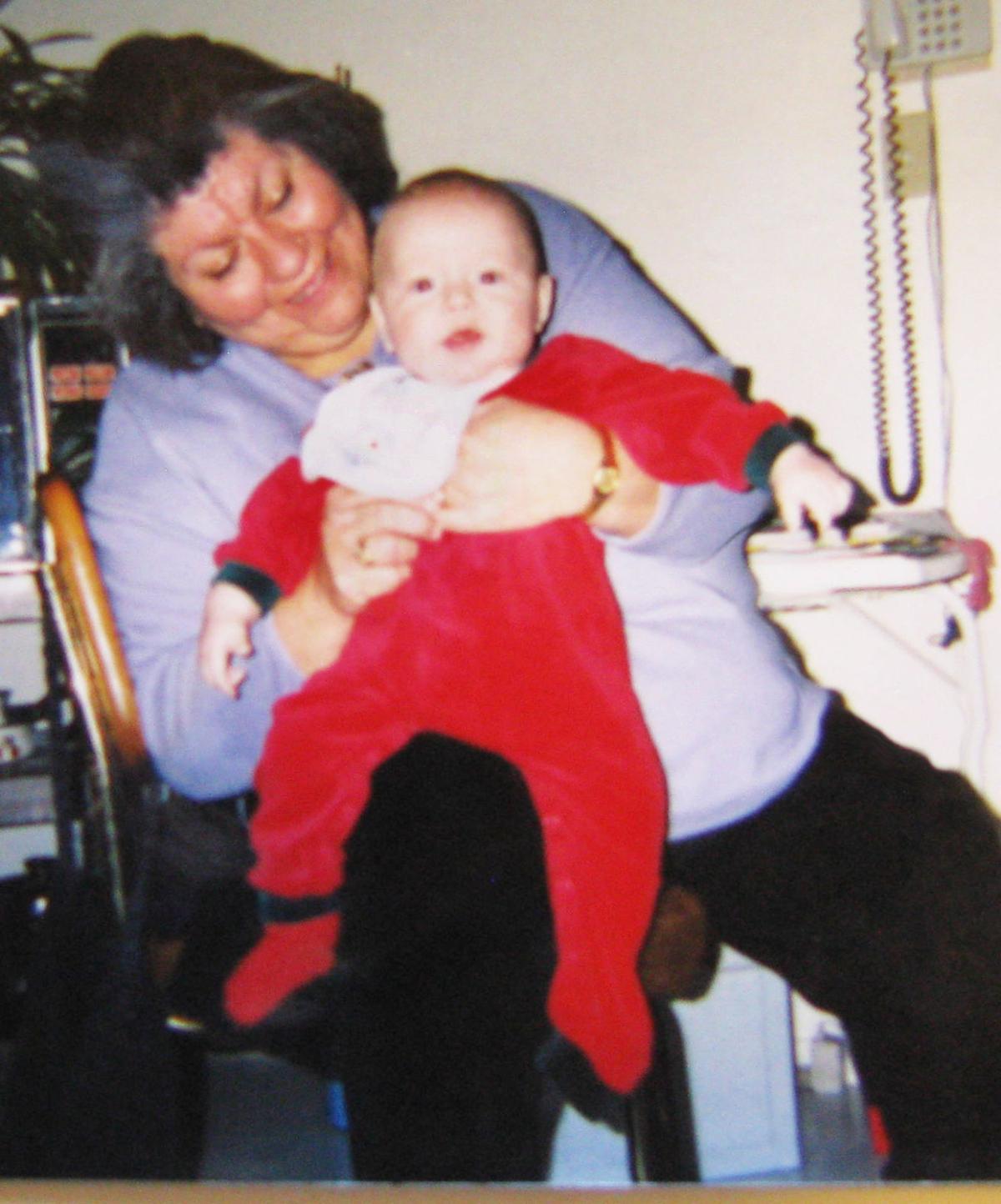 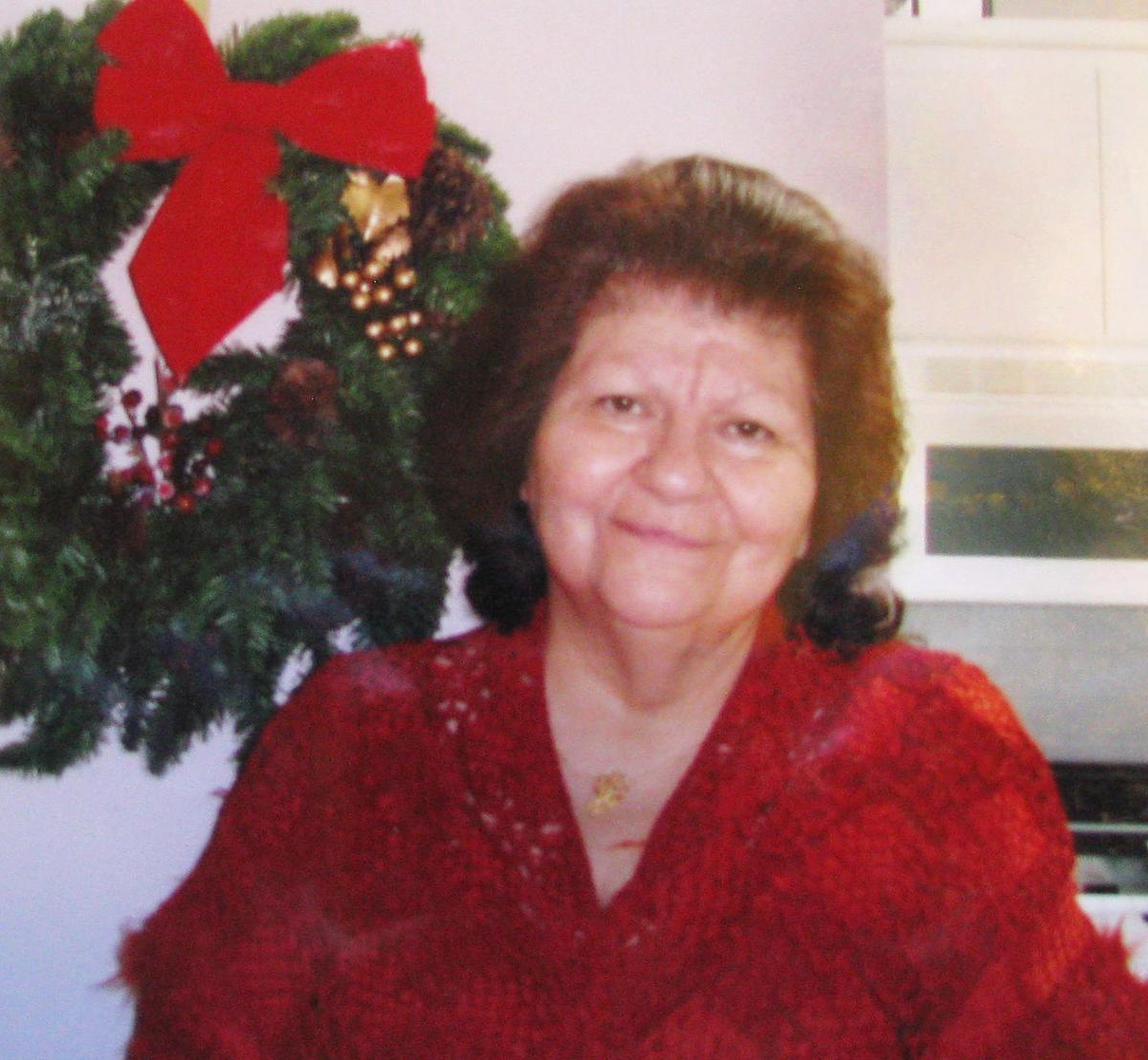 Janice working on a basket start.

Janice Williams with her late brother Harold Williams and her niece Ronneigh Quiroga, along with a basket made by her grandmother, which was gifted back to the Williams by the Geldman family.

Last week the Tehachapi area lost a unique, interesting and unforgettable woman with the passing of Nuwä elder Janice Williams, 70, on April 28. The local Native community lost a dedicated advocate and a compassionate auntie. And I lost one of the best friends I've ever had.

For many years Janice could be found at gatherings large and small, representing Indian culture and explaining basketry, traditional food gathering, and the ways and attitudes of the generations that preceded her.

Janice was an important part of outreach by the Tehachapi Heritage League, and was integral to the development of the Kawaiisu Gallery at the Tehachapi Museum, as well as the Handbook of the Kawaiisu, authored by her late brother Harold Williams and archeologist Alan Gold.

When Janice and I would give demonstrations on basketry or other aspects of Nuwä (Kawaiisu or Paiute) culture, we would sometimes get asked if we were both from Tehachapi. I'd say "Yes, we were both raised in Tehachapi. My family first came to Tehachapi in 1898. Janice's family got here a few thousand years earlier."

Janice was born on April 17, 1950, and she was the first daughter of Ed and Clara Williams, both fluent Kawaiisu speakers who learned English as their second language. Her two oldest brothers, Bobby and Kenneth, died in childhood, and the third boy, Harold, a polio survivor, became the oldest child and a leader of the family.

After Harold and Janice came their siblings Emily, Theresa, Ronnie and Valerie. The large Williams clan spent most of their younger years living on the large Mendiburu Ranch south of Highline Road, in what is now known as Mountain Meadows.

The Williams children played in the hills and canyons of the ranch, having it virtually to themselves as they were almost the only residents of that whole area. Janice was known for being fleet-footed as she ran around barefoot. The little old ranchhouse didn't have electricity, and as they grew up their lives in many respects were a throwback to an earlier era: their hard-working mother made homemade tortillas nearly daily, as well as traditional Nuwä foods.

Their father, Ed, also a hard worker, hunted deer, quail and rabbit to supplement the family diet. He worked at Monolith and so had steady income, but he had also worked on ranches, built fences, and he had constructed adobe houses. To use the phrase of one of his Monolith co-workers, Ed was "Raising a big family on a small paycheck." As a young man, Ed was photographed helping brand cattle, and that image was incorporated into the Red Front Blacksmith Shop historical mural on Curry Street.

None of the Williams family went hungry, but there wasn't extra food, either. Fruit like apples were kept in a locked cupboard to be doled out, but Harold learned how to unscrew the hinges on one door when their parents were gone, so he could pass some out to his younger siblings. The isolation of living on the Mendiburu Ranch, as well as their Indian identity that subtly distinguished them and made them different from their classmates, created a strong bond among the Williams children.

Janice graduated from Tehachapi High in 1969, and she worked at several different jobs during her working career, including as an assistant to attorney Linda Clark. One of her favorite jobs was the years she spent working for California Indian Manpower Consortium, which allowed her to travel throughout the state, visiting different reservations and rancherias, assisting Native people with employment opportunities.

Around 2002, when her cousins Lucille Girado Hicks and Luther Girado began teaching their endangered language, Janice and I were two of the most dependable students. It was then that she and I became close, and we've been inseparable in the years since. When Lucille got tired of the long trips to Tehachapi from her home in Montclair, she turned the classes over to Janice and I.

We were able to add another dimension when Janice and I learned traditional basketry skills from master weaver Mary "Weegi" Claw, a Chemehuevi Indian lady. The Chemehuevi, like Kawaiisu, is another Southern Paiute tribe and the most closely related. Weegi became like family to Janice and I, and we have all had many adventures together.

And Janice loved adventures, going places, and doing things. Despite of numerous health difficulties in later years, Janice was always game for going out and collecting wild foods, attending language and basketry gatherings, parties and celebrations. She loved life, and she loved people.

Janice especially loved children. She would ask all of her many nieces and nephews, and grand-nieces and nephews, "Who's your favorite auntie?" And the only correct answer was "You are!". She adored her own son Marc, who she called "My bouncing baby boy" (he's 6-foot, 8-inches tall) and her grandson Lance and her granddaughter Chloe. But she also had much love for the children in her family, the kids at her beloved Apostolic Faith Church, and among her many friends.

For Janice had countless friends. She genuinely liked people, and was friends even with the underdogs and the overlooked people. She once even unwittingly gave a ride to Bakersfield to an inmate who had escaped from CCI. She was steadfastly loyal to her friends and loved ones. Both of her ex-husbands, Marc Bartlett and Floyd Ellis, came back and were cared for by her in their final days.

Although she had few possessions while growing up, Janice loved pretty things, and as an adult had countless pairs of shoes, purses, jewelry, perfume, lotions, etc. She also liked to dance and loved music and going to concerts. Janice was a great cook and fed lots of people when she was able to work in her kitchen.

Although not a prude or stuffy in any way, Janice also believed in dignity and didn't like profanity or disrespect. Once when we were gathering elderberries, we stopped and picked some from a bush growing along Banducci Road. The property owner came barging out, using obscenities, told us the plant was on his property and asking who we thought we were. Janice quietly listened to him with a frown, and then said "I'm a Tehachapi Indian lady, we're just picking some elderberries, and I don't appreciate you using that language around me." The guy then apologized and said "Help yourself to as many as you want."

Laughter and fun were part of the very essence of Janice's being. She had a great sense of humor, and she found things to laugh about many times every single day.

Janice had spent the past five weeks in a hospital in Bakersfield, suffering from several health issues, including diabetes, and of course visitors were prohibited because of the pandemic. Those five weeks have been the longest I've gone without spending time with her in more than 17 years, although we texted and talked almost daily. We called each other "my Haneez," which means "Honey" in Nuwä, and were the very best of friends.

Those of us who were closest to Janice are having a hard time imagining our lives without her. She was one of a kind, and we just feel broken. She intensely loved her family, her friends, her Indian culture, and the Tehachapi Mountains. And we intensely loved her back.