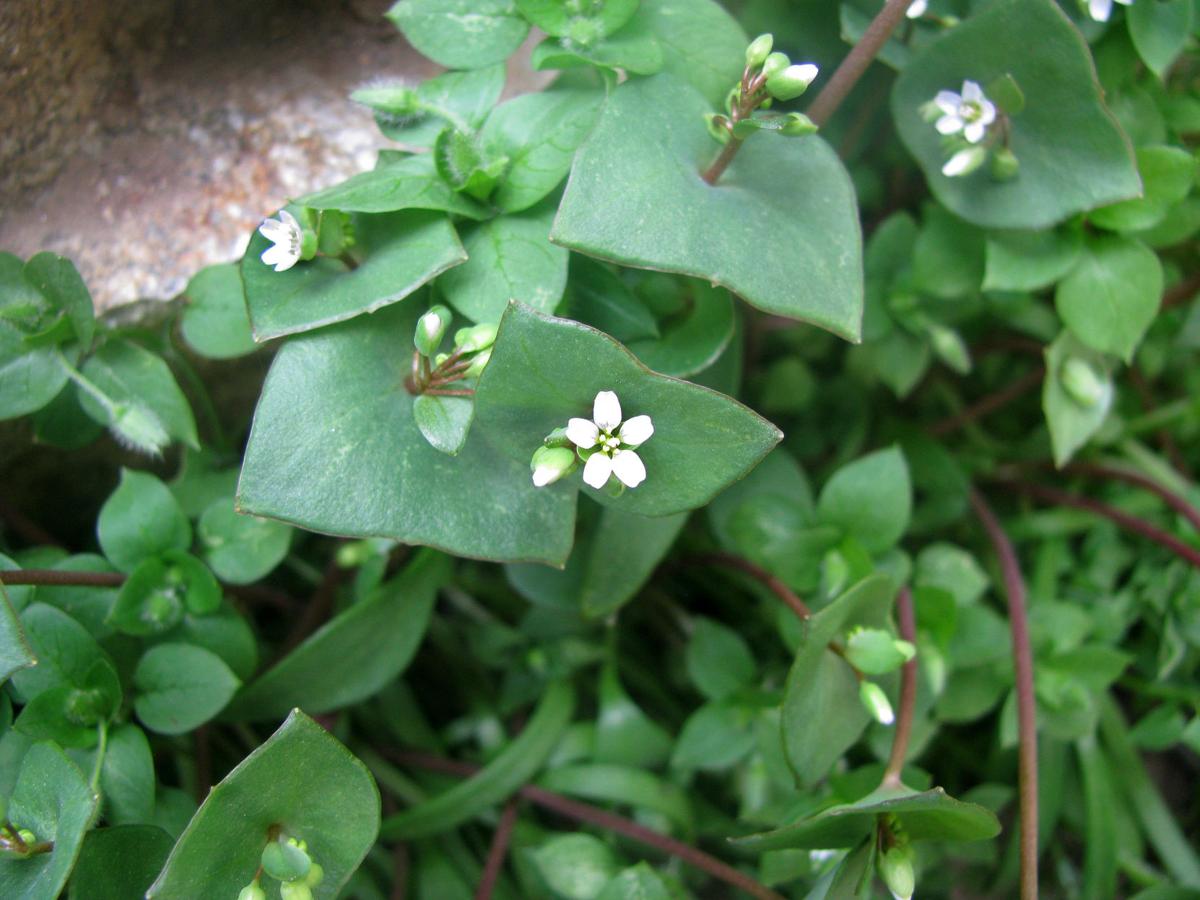 The tiny white flowers of Miner's Lettuce made their first appearance this week. 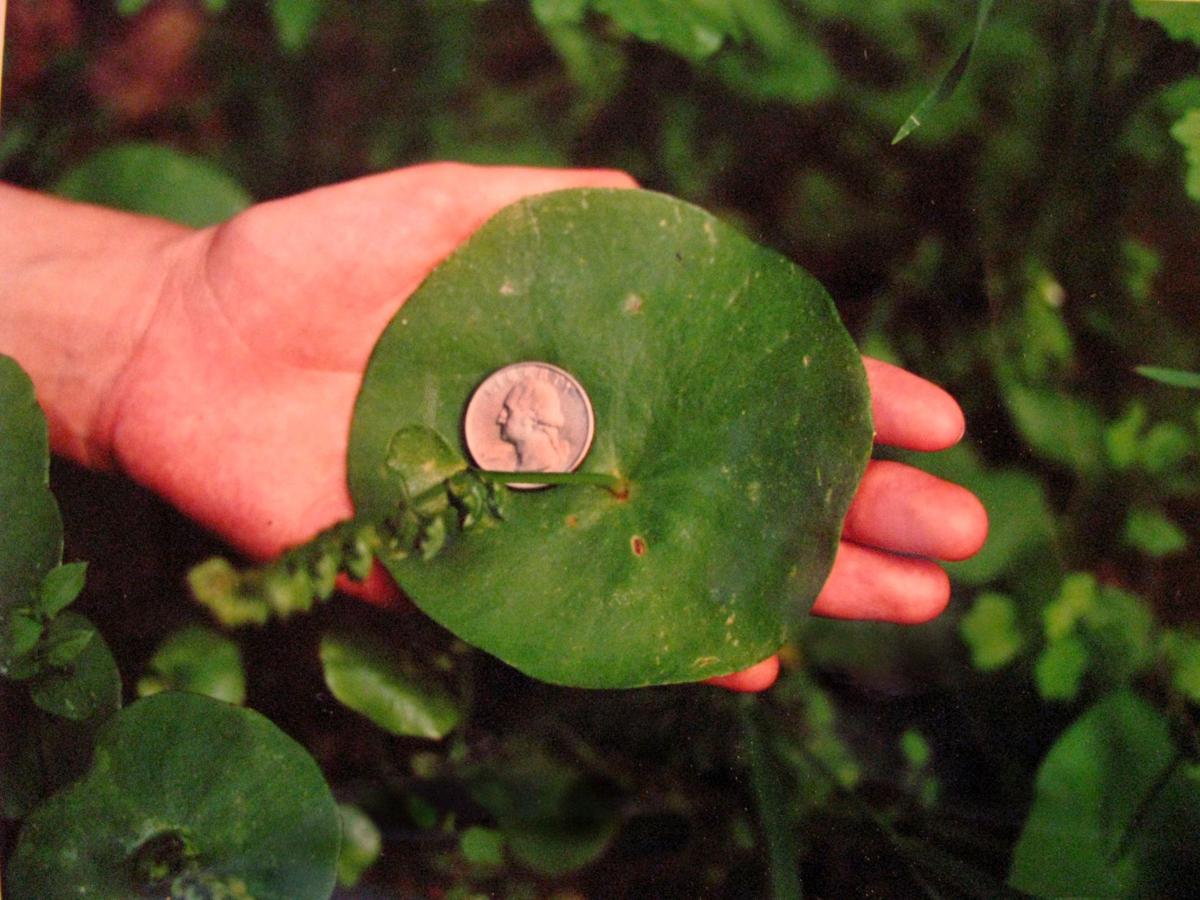 This was the biggest Miner's Lettuce pad I've seen. It grew in a very shady little canyon beneath a Blue Oak. 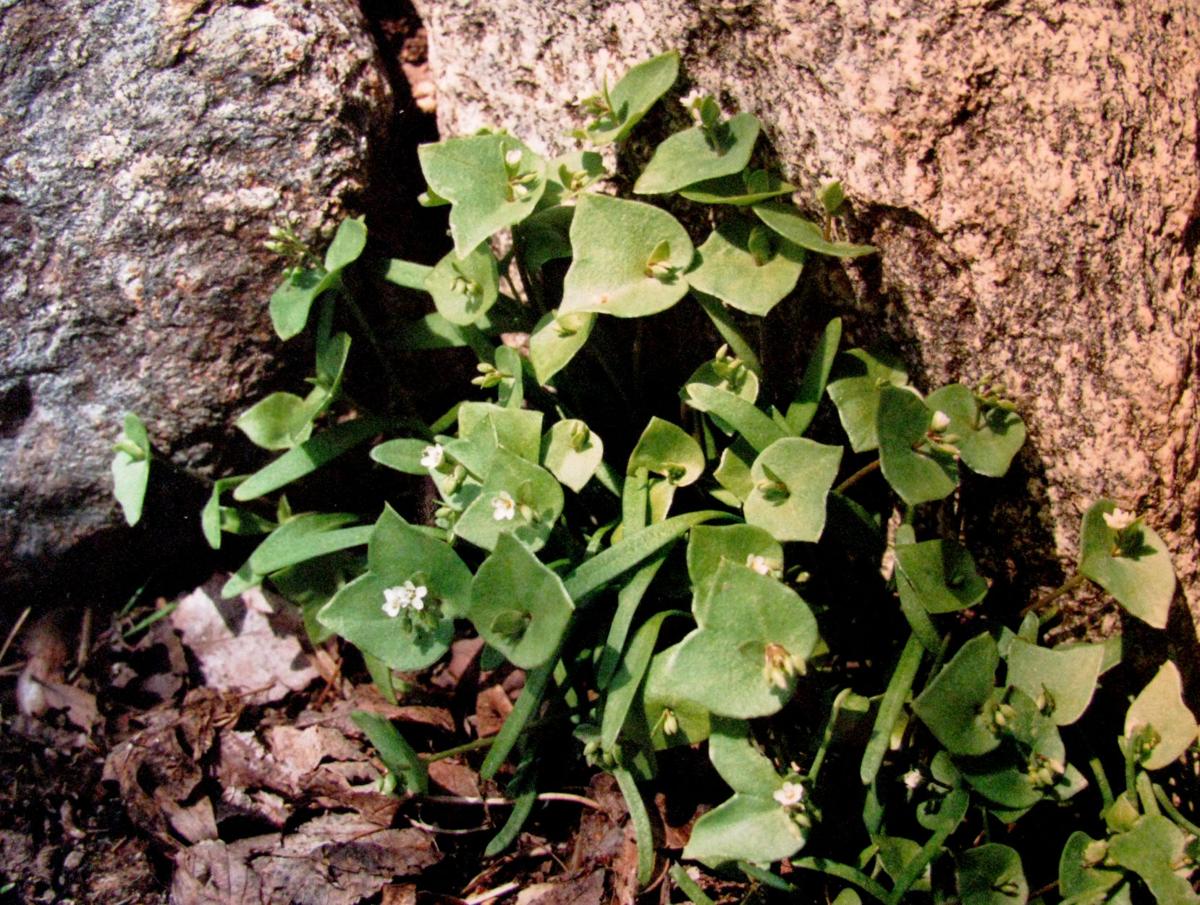 A Miner's Lettuce plant grows in the shelter of an old rock wall. 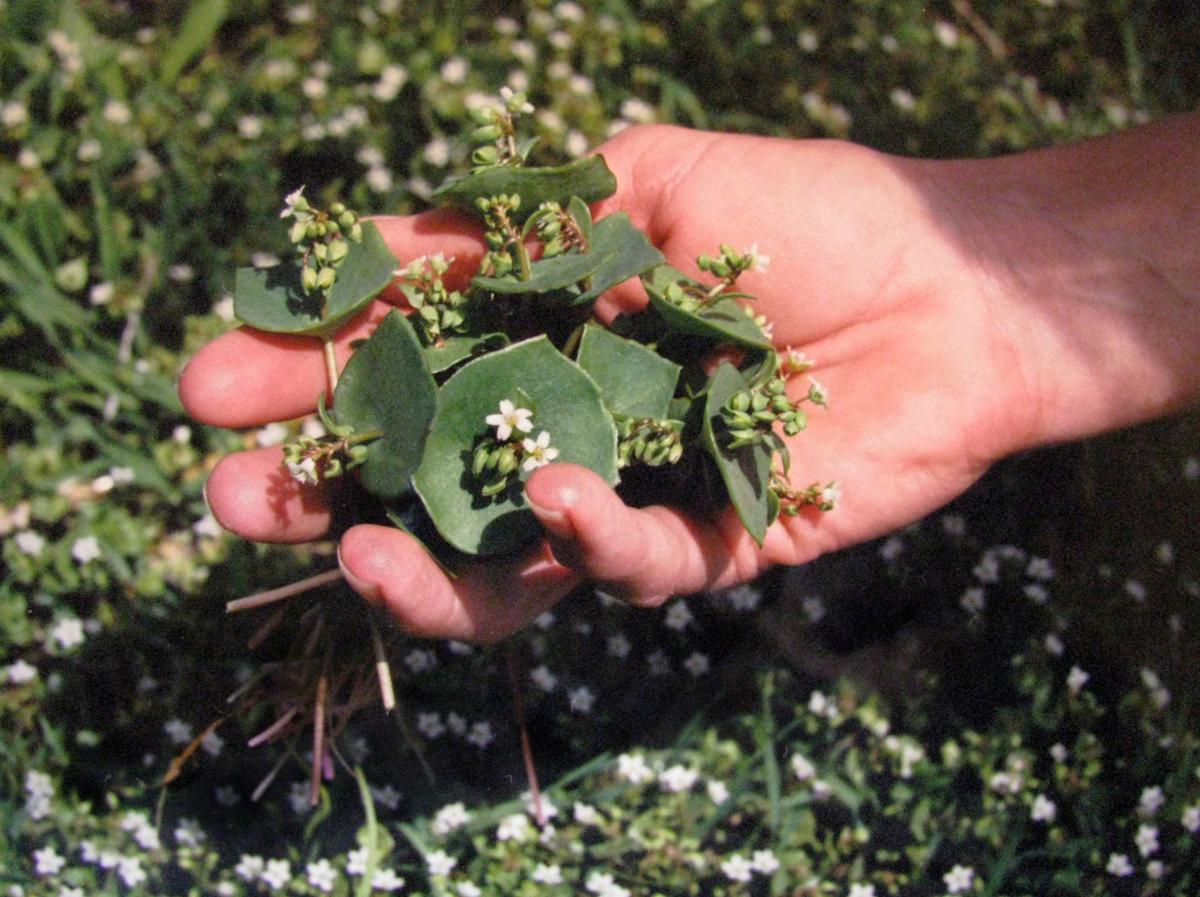 When foraging, you can pick off the circular leaves and stems. The seeds are also edible. 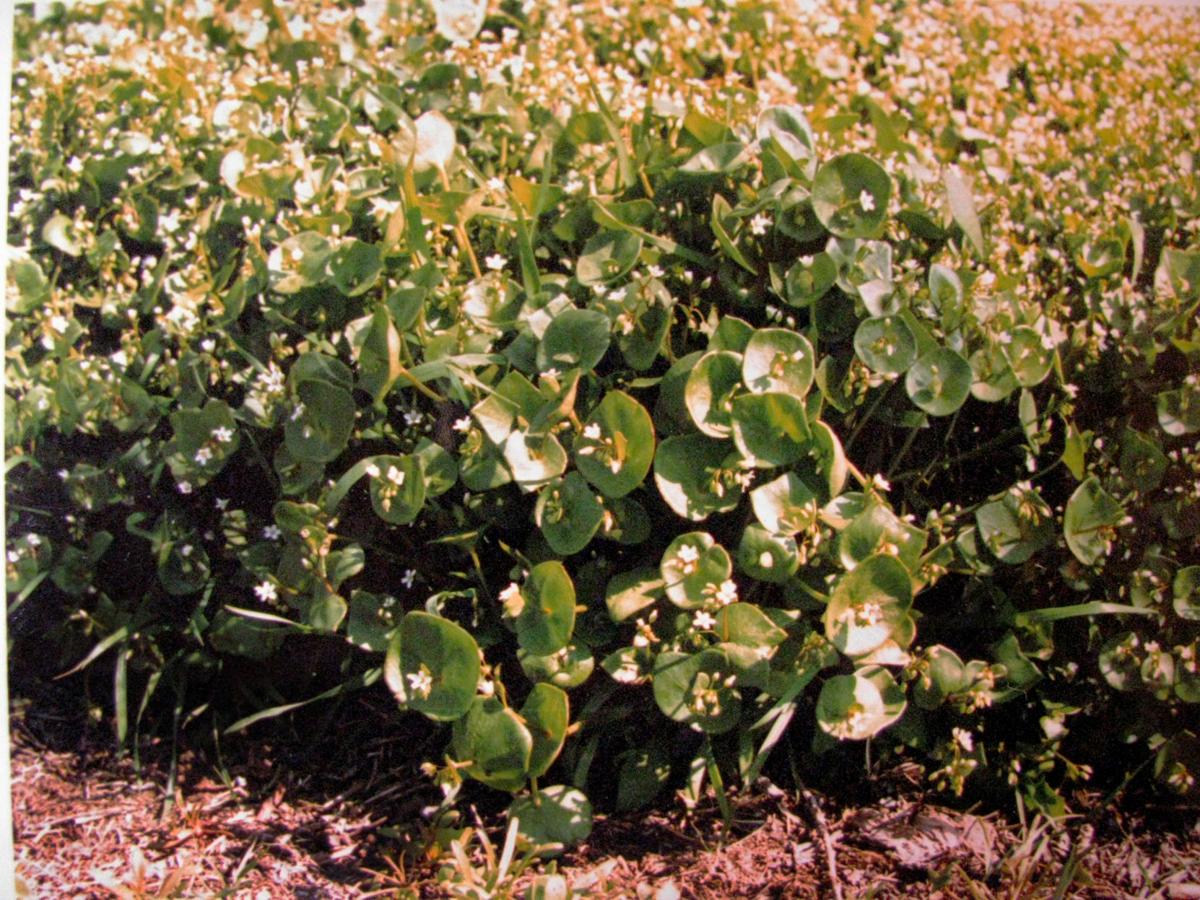 The tiny white flowers of Miner's Lettuce made their first appearance this week.

This was the biggest Miner's Lettuce pad I've seen. It grew in a very shady little canyon beneath a Blue Oak.

A Miner's Lettuce plant grows in the shelter of an old rock wall.

When foraging, you can pick off the circular leaves and stems. The seeds are also edible.

With the warming weather of the past few weeks, flowering fruit trees and the earliest wildflowers have begun to bloom. One of these is a diminutive, succulent little plant with tiny white flowers and tasty leaves: Miner's Lettuce.

This is one wild food that most hikers can recognize on sight and will readily sample. Miner's Lettuce (Claytonia perfoliata) is a low-growing plant whose two uppermost leaves fuse around the flowering stem to form a disc shape. With delicate white flowers blooming just above this little circular fused leaf, Miner's Lettuce plants resemble a cluster of miniature lily pads.

Miner's Lettuce gets its common name from the fact that it was eaten by gold miners, some 300,000 of whom flocked to California after word got out that gold had been discovered at Sutter's Mill in 1848.

These miners arrived before there were many farms in California, and many of them subsisted on flour, dried meat, salt pork, and other foods that contained little Vitamin C. As a result, many of them suffered from and even died from scurvy — at least 2,000 to 3,000 miners succumbed in the years 1849 and 1850, and some historians estimate as many as 10,000 miners died of scurvy. In the mining camp of Sonora, a hospital exclusively for the care of scurvy-stricken miners was established in the fall of 1849.

Long distance sailors had learned more than a century earlier that lemons, oranges and limes could cure scurvy, though the presence and role of Vitamin C hadn't yet been discovered. Those in the mining camps were aware of this citrus cure, and as a result the demand for lemons and oranges in California's Gold Rush days helped initiate the state's famous citrus industry.

Sadly, there were many different native plants that could serve the same purpose as sources of Vitamin C, and no one needed to have died from this entirely preventable malady. One of the easiest to find and use was Claytonia perfoliata, which was given the name Miner's Lettuce since it proved to be the salvation of many scurvy-stricken miners. The gold seekers were made aware of this remedy by Native Californians.

According to a study in the Journal of the American Dietetic Association, a salad's worth of Miner's Lettuce, 100 grams, contains a third of your daily requirement of Vitamin C, 22 percent of the Vitamin A, and 10 percent of the iron. And as many California children are taught growing up, you don't even have to prepare it — just pick some leaves and start eating them.

The Nuwä (Kawaiisu or Paiute) people of the Tehachapi area call Miner's Lettuce by the name uutukwa'arübü, pronounced ooh-tuk-KWA'A-rub-ah, and it was a traditional food, eaten mostly in late winter and early spring. Unlike most salad greens, Miner's Lettuce doesn't lose its pleasant taste once it starts flowering, though it does get a little more of a bite or a mild aftertaste of bitterness in late spring or summer.

Seeds of Miner's Lettuce were taken back to Europe by about 1800, and it became a popular salad herb. The British reportedly even planted it in Cuba and Australia to serve as a source of Vitamin C. It has become naturalized in England, one of the few weeds to come from North America. Nearly all of our edible weeds, like dandelion, watercress, purslane, mallow, mustard, chickweed, etc. come from Europe, and Miner's Lettuce is one of the few of our plants that we sent back across the Atlantic.

Now Miner's Lettuce is used in salads and hors d'oeuvres in artisanal restaurants, and its place in California's culinary tradition is assured.

Miner's Lettuce grows for the longest duration in areas that are more moist and shady. It can form an almost solid ground cover in favorable areas, like on north-facing canyons slopes underneath Blue Oaks, for example, or near a seasonal creek.

The size of the mostly circular leaves seems largely determined by the growing conditions, and these little pads may range from the size of a dime to a small pancake — accompanying this article is a photo I took of the biggest one I have ever encountered, which grew in a shady canyon and was 4 and 1/2 inches wide.

Some foragers gather Miner's Lettuce and include them in a mixed salad with other greens and toasted sesame seeds, topped with some kind of vinaigrette dressing. But you can also just munch on some out of hand. Either way, you'll be continuing a tradition of eating Miner's Lettuce that goes back 170 years with the settlers, and thousands of years with Native Californians.