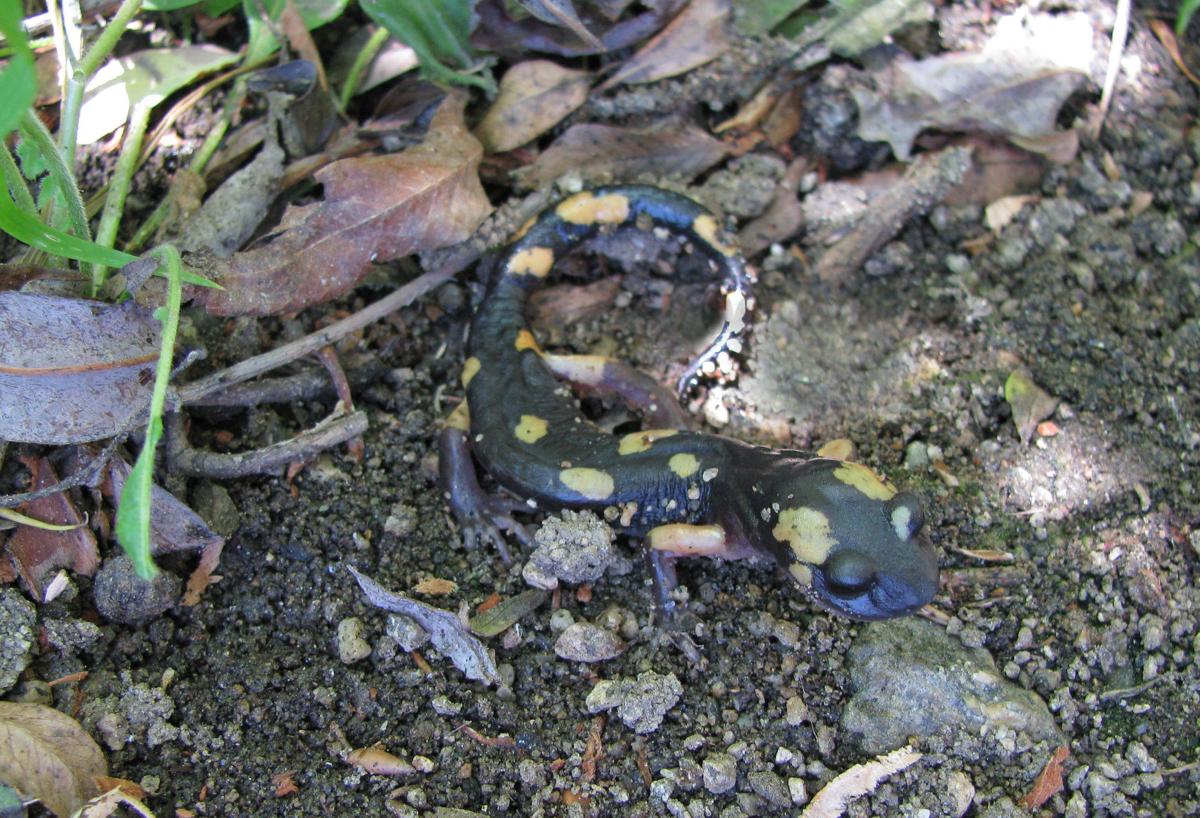 A Yellow-blotched Ensatina, a salamander subspecies with a limited range that includes the Tehachapi Mountains. 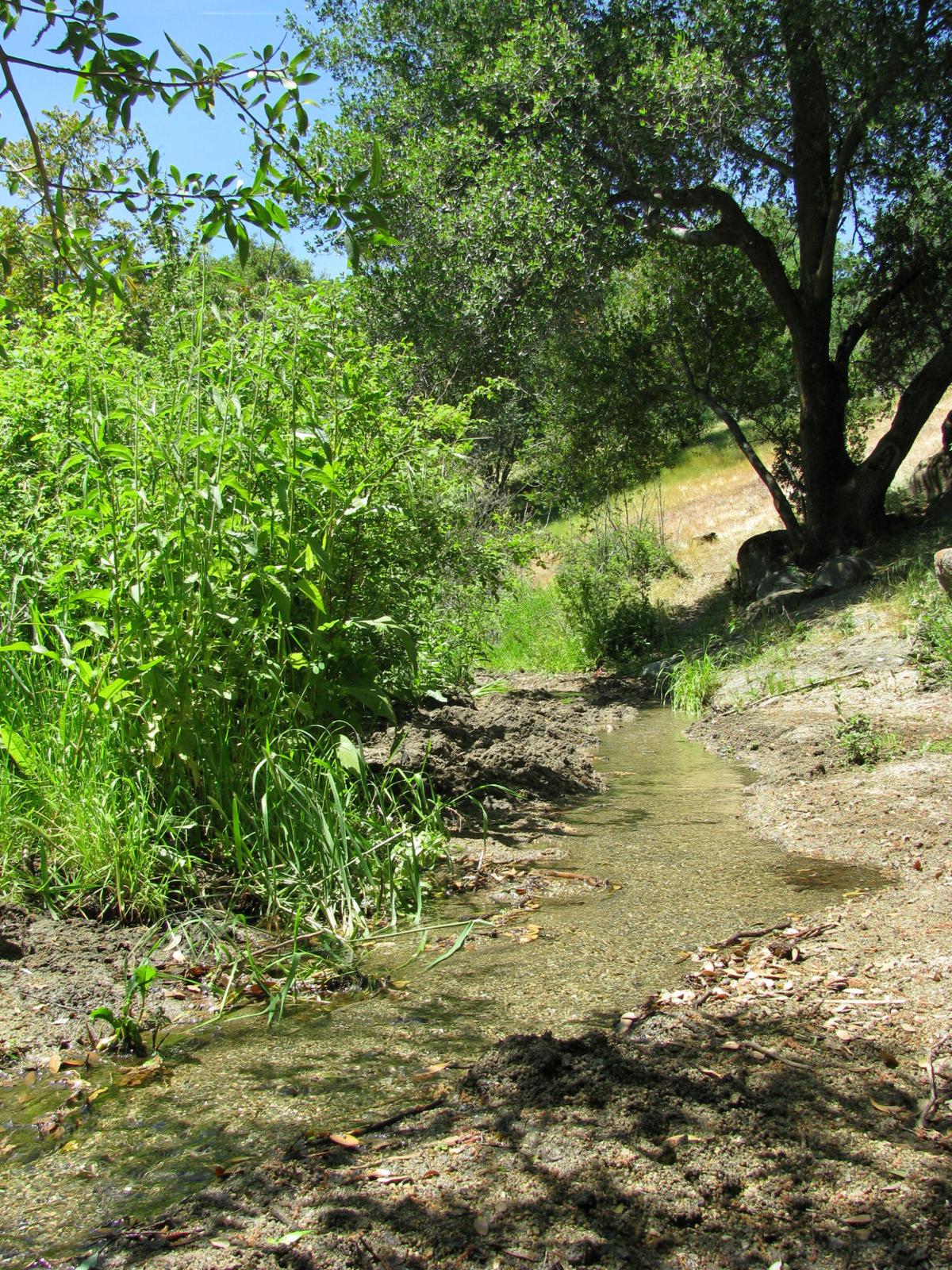 Clear Creek, which runs in the Hart Flat area, is one of the homes of these salamanders. 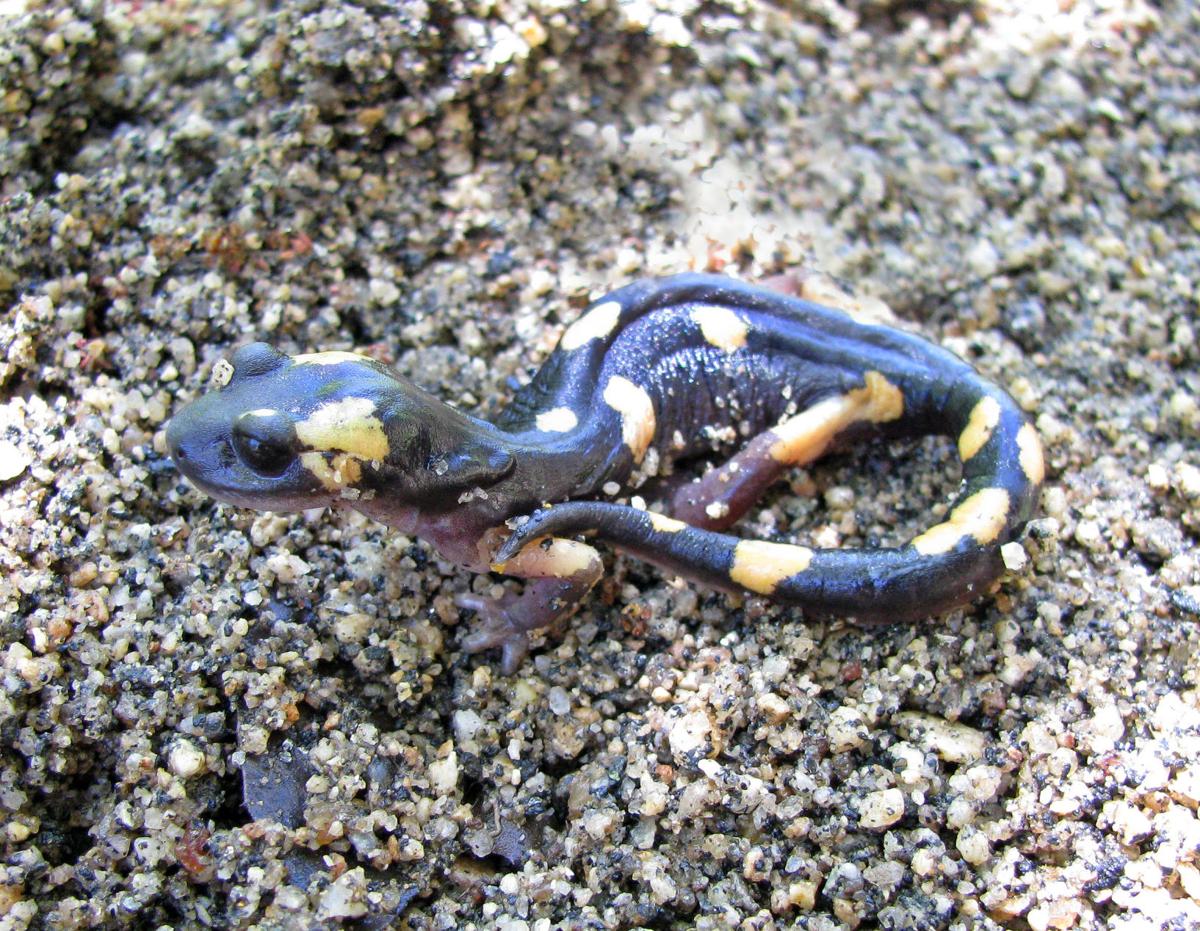 Yellow-blotched Ensatinas breathe through their skin, and so require a damp, though not necessarily wet, environment.

A Yellow-blotched Ensatina, a salamander subspecies with a limited range that includes the Tehachapi Mountains.

Clear Creek, which runs in the Hart Flat area, is one of the homes of these salamanders.

Yellow-blotched Ensatinas breathe through their skin, and so require a damp, though not necessarily wet, environment.

Even when you spend a lot of time observing wildlife in the Tehachapi Mountains, there are many, many species that are enigmatic and you seldom encounter them. One of these is a delicate little amphibian with big eyes called a Yellow-blotched Ensatina.

These small salamanders live in moist areas, so they are limited to places in the vicinity of creeks, springs or streams. Adult Ensatinas generally reach about six inches long. They have dark skin and yellow splotches, which mostly seem rather random but they usually have a large yellow patch behind each eye and on top of both their front and hind legs.

These placid creatures don't breathe through lungs, but rather through their skin and tissue lining the inside of their soft mouths. This necessitates a life in a mostly moist environment. Ensatinas could be described as being "riparian obligate," meaning they require a home in a streamside habitat, or one that's not too far away.

However, unlike many amphibians, including other species of salamanders, Yellow-blotched Ensatinas (Ensatina eschscholtzii croceater) do not have a strictly aquatic childhood. Instead of going through their larval stage as tadpoles swimming in water, tiny Ensatinas hatch out on land, and are miniature versions of the adults.

The female Ensatina finds a protected area, known as an aestivation site, where she can lay a dozen or so eggs. This may be underneath fallen tree trunks, sloughed off bark plates, or in more modern times, under a piece of lumber or plywood scrap.

She guards these for about four months, until they fully develop and hatch. Apparently one of the potential threats is from other adult salamanders, who are not above snacking on unattended eggs. When the babies do hatch, they often remain hidden in the brood chamber until the first rains of autumn, when they disperse.

In a trick that is reminiscent of many lizards of the reptile world, Ensatinas are amphibians that can detach their tails and leave them twitching on the ground, to distract a predator while the salamander makes a getaway. The Ensatina grows a new one to replace the one left behind.

One of the identifying characteristics of Yellow-botched Ensatinas is the fact that their tail constricts slightly where it joins the body. Also, they have poison glands in their tail that can exude a repellent milky substance as a defensive mechanism, as do some toads and frogs.

In fact, their yellow spots may be a form of aposematism, or warning to other creatures that these salamanders are not good to eat. The toxin is not harmful to humans, but can reportedly cause numbness if you happened to get any on your lip. This would seem to me to be an extremely unlikely occurrence — I've handled several Yellow-blotched Ensatinas, and they weren't alarmed or defensive at all, and certainly weren't secreting predator repellent.

The salamanders eat many different types of invertebrates that they encounter, which may include grubs, larvae, worms, beetles, spiders, ants, millipedes, sowbugs, etc.

Yellow-blotched Ensatinas have a small distribution area, and are endemic to our part of California. They are largely limited to the Tehachapi Mountains, Paiute Mountains, Lower Kern Canyon, Breckinridge Mountain, Caliente Canyon, and some adjoining mountainous areas.

These small Ensatinas go about their unobtrusive lives quite unseen by humans. They are mostly hidden, and emerge on rainy or misty nights when temperatures are moderate. Their subtle existence is proof that when it comes to the natural world, there is much more than meets the eye. . .