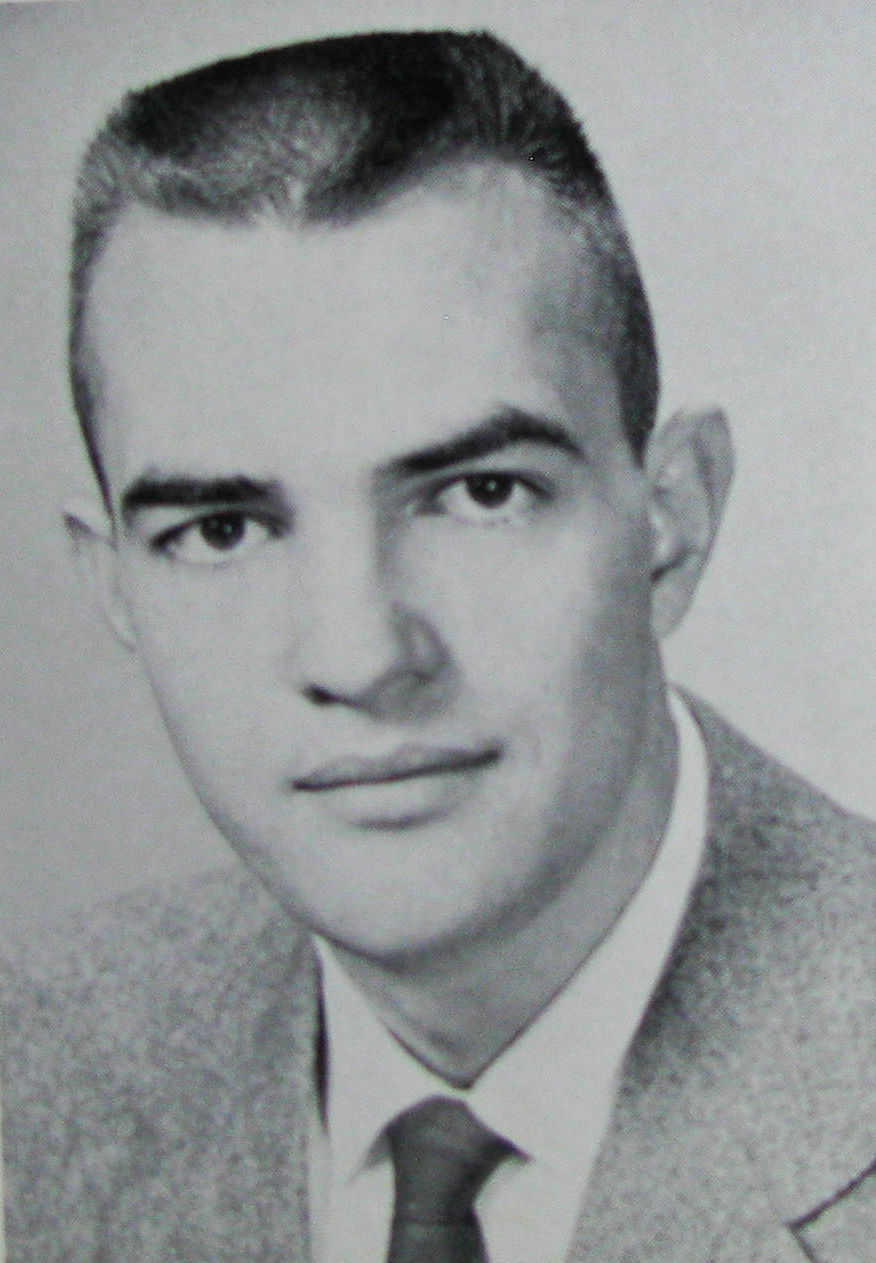 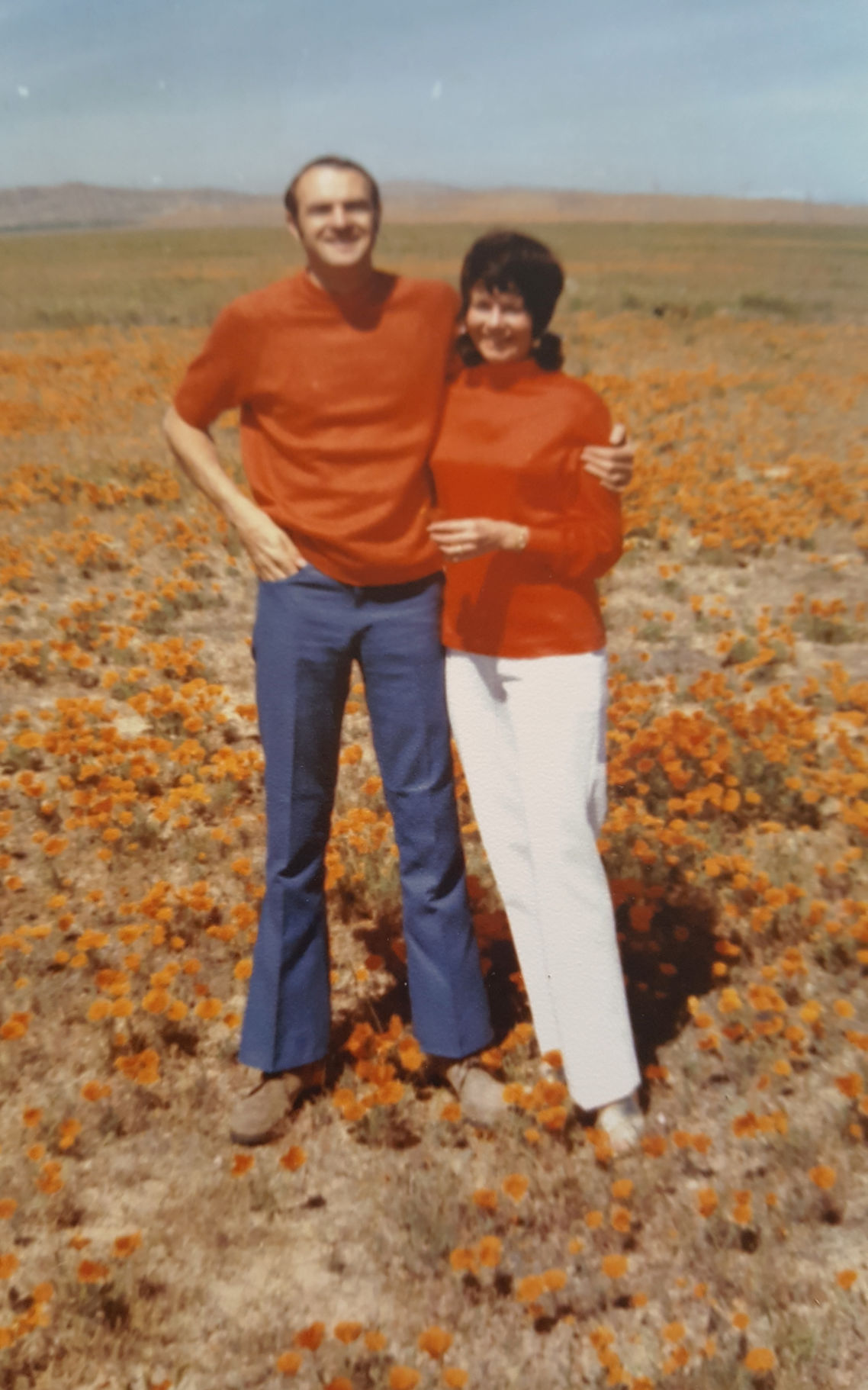 John and Margaret Squires at the Antelope Valley Poppy Preserve in 1969. 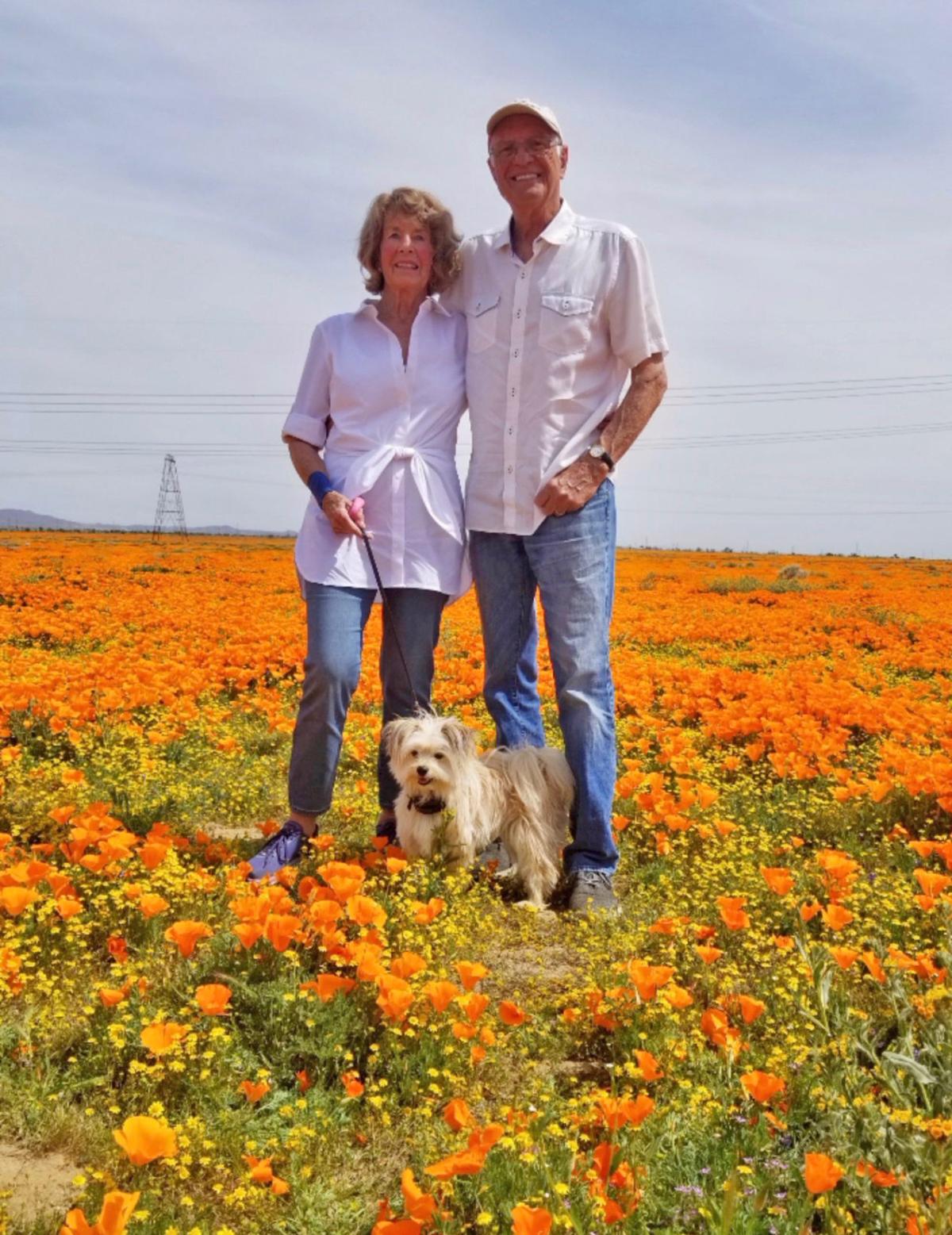 John and Margaret at the Poppy Preserve in 2019. 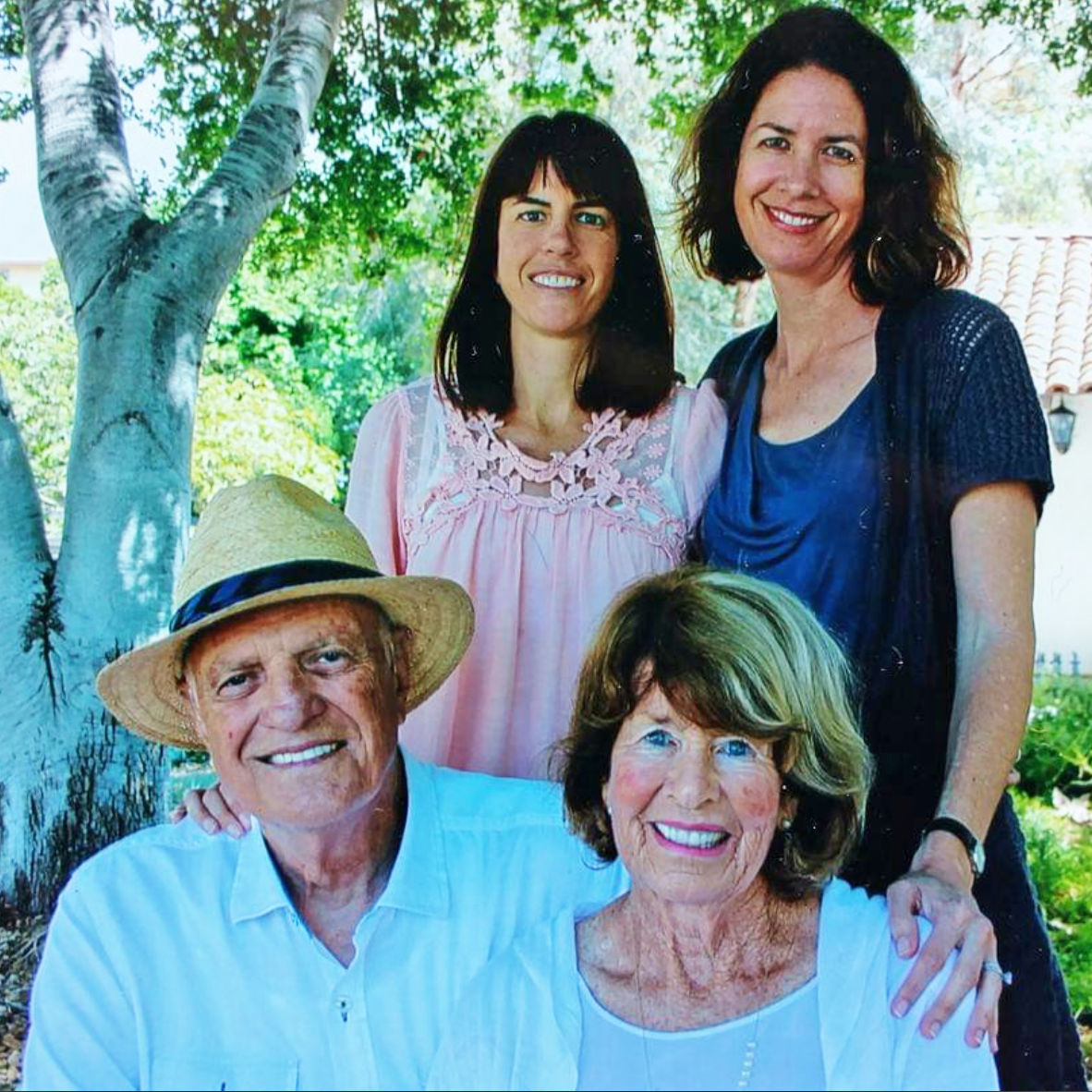 John and Margaret and their girls Heather and Brooke. 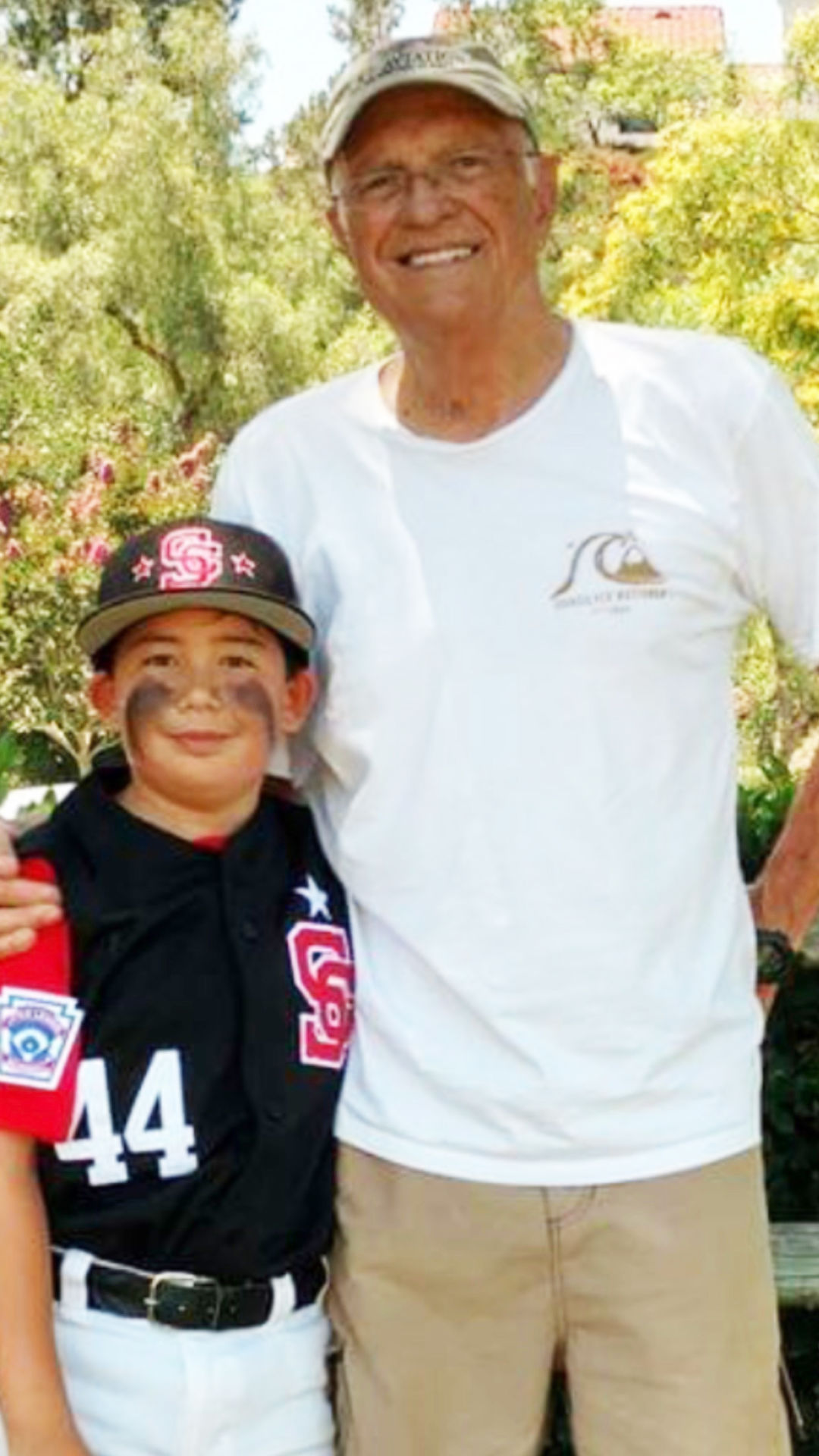 John with his grandson Jason at a baseball tournament.

John and Margaret Squires at the Antelope Valley Poppy Preserve in 1969.

John and Margaret at the Poppy Preserve in 2019.

John and Margaret and their girls Heather and Brooke.

John with his grandson Jason at a baseball tournament.

The life of an original hometown Tehachapi boy completed its circle recently with the passing of John Squires, 83. Born in Tehachapi on Dec. 19, 1937, John was still active and in good health when he suffered sudden cardiac arrest at his home in Bakersfield on April 24.

John and his sister, Linda, were the children of Vaughn and Vivien Squires, who were early entrepreneurs in Downtown Tehachapi, owning several different businesses. The Squires family still owns the building that houses Hitching Post Theaters and Perfetto Bistro.

John was an energetic, hardworking youth who helped with the family business as he grew up in Tehachapi. He graduated from Tehachapi High in 1957, one of a graduating class of 46 students. His classmates included other longtime Tehachapi residents like Betty Bassler Barnes, Pete Galan Jr., Starr Harrington, Jerrie Marble Cowan, Larry Jones, Curt Madding, Gerald Vukich and Helen Hutson James. Bob Mitchell and Lars Oberg were Tehachapi kids from other classes who became close friends with John as well.

After graduation, John served two years in the Army, then graduated from Woodbury University in Los Angeles with a degree in accounting. After graduation, John indulged his lifelong curiosity and wanderlust and traveled throughout Europe. He eventually found himself in New Zealand, where in 1969 he met and married Margaret. The two of them came back to John's home of Tehachapi to begin their 51 years of life together.

Margaret was probably the only Kiwi most Tehachapi people ever met back in those days, and she left a memorable impression with her beauty and her lovely unfamiliar accent. John went to work as a businessman, but all throughout his life he also made the most of his free time, riding a motorcycle, soaring, flying, kayaking and fishing.

The Squires family had owned the local drug store, and later operated what when then known as a "variety store," which sold things like stationery and office supplies, gifts, and a wide assortment of household items. I remember hearing that on the morning of the 1952 Tehachapi earthquake, Vaughn Squires hurried Downtown to check on his store, and almost went back home when he got partway to the store and realized he had forgotten the front door key. He discovered a key wasn't necessary — the whole storefront, like many Tehachapi businesses, had collapsed and tumbled into the street.

John was popular with his customers because he was unfailingly polite to the older generations, whom he knew from growing up in Tehachapi, and also because he was nice to people in general. He loved children. As a THS senior, John was voted a senior class favorite in two different categories: Friendliest and also Most Sincere.

I knew and liked John Squires basically my entire life. His mother, Vivien, and later his wife, Margaret, would buy vegetables from us at my family's farm on Cherry Lane. Vivien was a tall, stately woman with a delightfully dry sense of humor, which John also shared. Margaret often came to the farm with her adorable little girls Heather and Brooke in tow.

When I was a little kid, Squires Variety, later Squires Hallmark, was one of the main stores in Tehachapi, and I was there regularly. Downtown businesses used to have a "sidewalk sale" on a day and evening close to Christmas, when they would stay open later than usual. Also, less expensive items would be put on tables outside the stores so children could buy gifts for their family members. I used to love that Tehachapi tradition.

I went to work for the Tehachapi News in 1981 while still in high school, and I visited with John weekly. He was always curious about life and what was going on in the area. In addition to his encompassing curiosity, John also had a wonderful sense of enthusiasm, which was unusual — so many adults act reserved and somewhat aloof, but not John — he was enthusiastic about life and learning new things.

I remember John telling me about his soaring experiences in a sailplane that was launched from Mountain Valley Airport off Highline Road. He sailed far and wide when the lift was right. I was captivated when he told me of the day when he circled higher and higher on rising thermals, until he was so high he could see Lake Isabella to the north, the Channel Islands and the Pacific Ocean to the west, and yet still look down and see his little hometown of Tehachapi and the location of the gliderport.

John's enthusiasm was undimmed — last year we held a storytelling event at the BeeKay Theater, with traditional Kawaiisu stories told in the Nuwä language, and in the audience I was delighted to see John Squires. We spoke afterwards and he had some questions, and he was fascinated by the experience. Not because he specifically interested in Native culture, but because he was interested in all kinds of things. Life was fascinating to him.

John made changes to Squires as times changed, for retail can be tough — he bought the necessary equipment and learned how to develop and print film, and that was added to the services they offered. When business focus and customer attention drifted west to the Tucker Road corridor, Squires Hallmark moved to the SaveMart shopping center, near the location of Sears store.

John and his family eventually moved to Bakersfield, but he continued to come to Tehachapi and was here a day or two before his passing. He remained boyish and enthusiastic his entire life.

There are lines from an old Irish folk song that remind me of John. Called "The Bard of Armagh," it tells of an aged harper thinking back on his life: "Oh how I long to muse, On the days of my boyhood, Though four score and three years, Have flitted since then, But it brings sweet reflection, As every young joy should, And merry-hearted boys make the best of old men. . ."