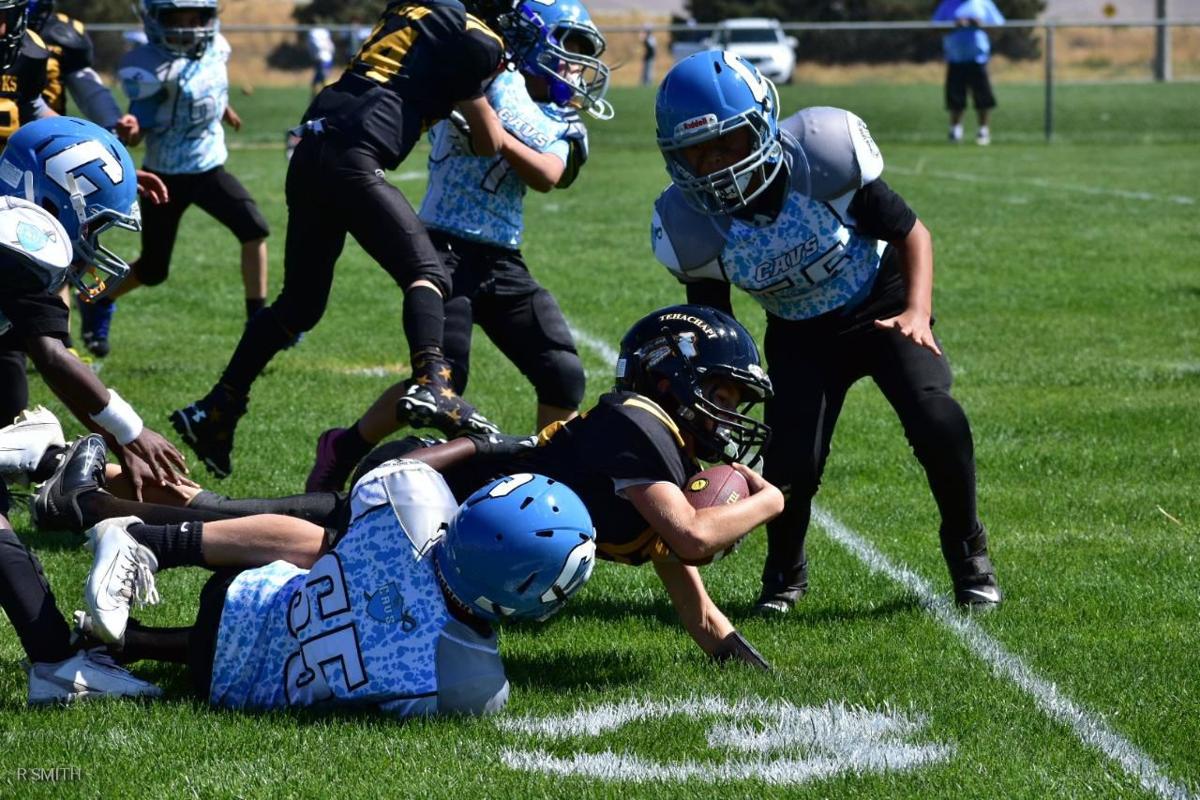 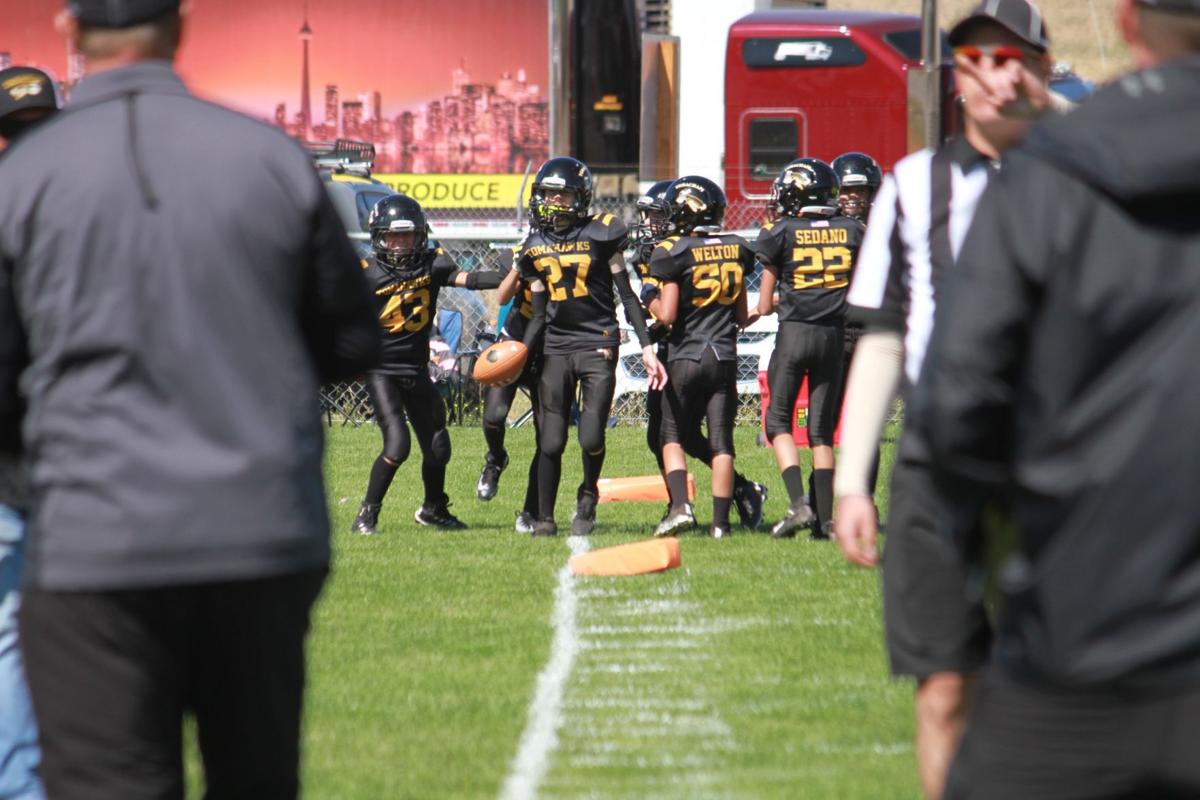 Teammates celebrate with #27 Peter Cusimano after a pick six, making it the first defensive touchdown of the junior varsity's season. 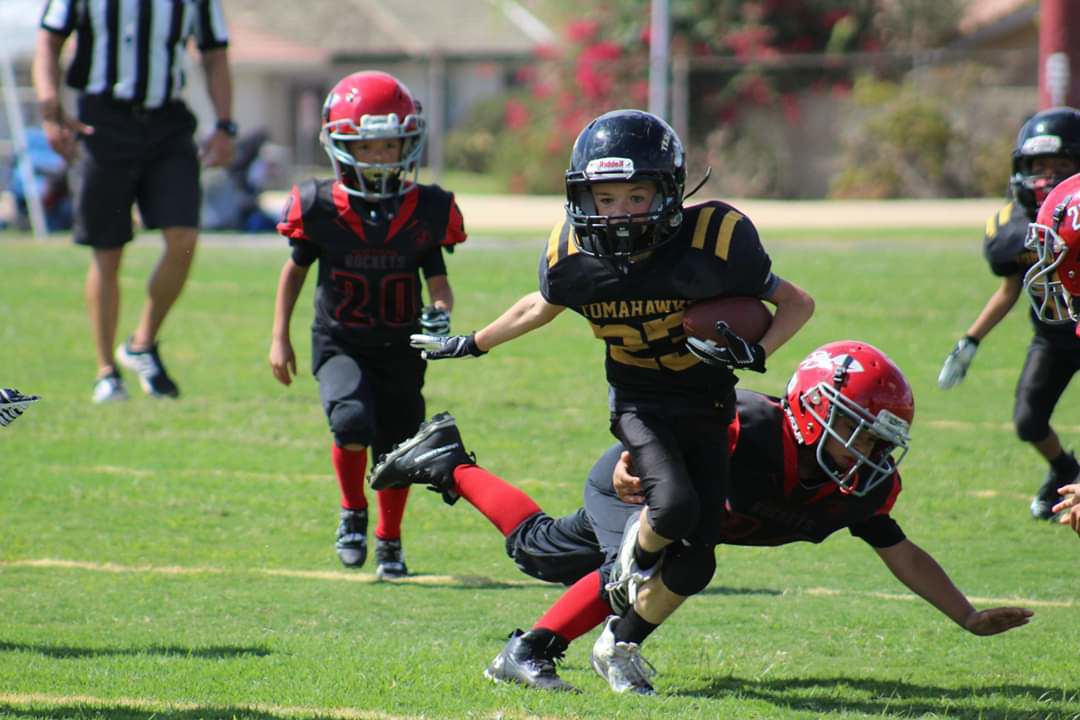 Freshman running back No. 23 David Sipes. 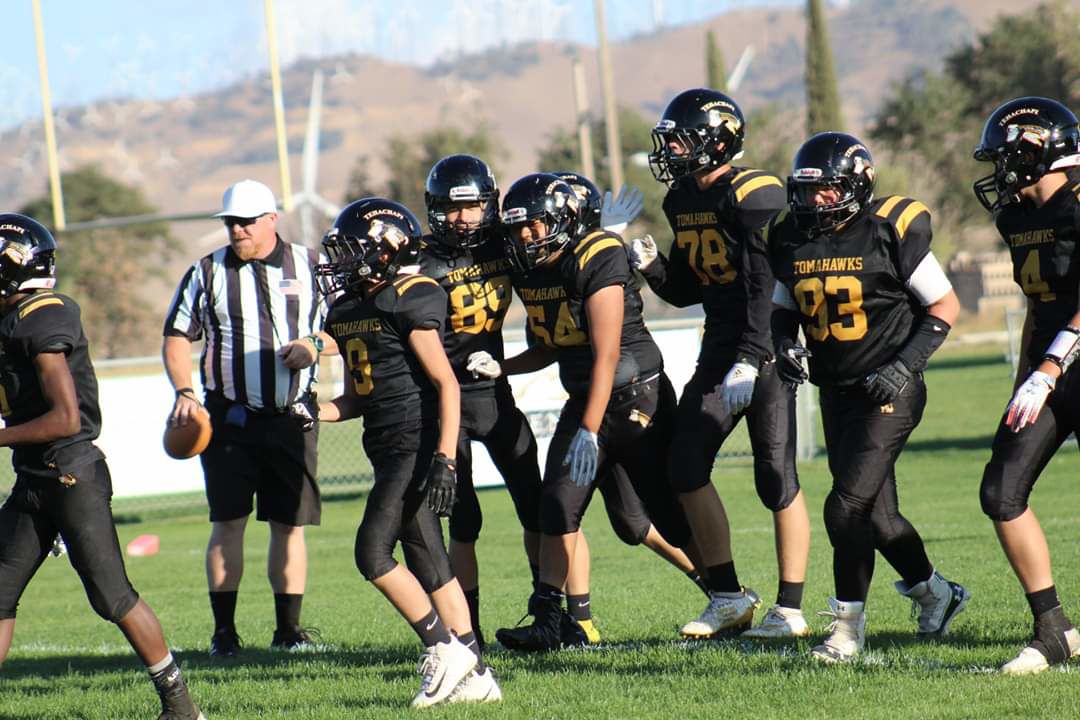 The varsity Tomahawk cheerleaders on the field.

Teammates celebrate with #27 Peter Cusimano after a pick six, making it the first defensive touchdown of the junior varsity's season.

Freshman running back No. 23 David Sipes.

The varsity Tomahawk cheerleaders on the field.

Can you feel it in the air? The brisk temperatures as you arrive to the field in the morning, the cool breeze throughout the afternoon that sends you to the car looking for a sweatshirt. It’s the feeling of fall football! If our Tehachapi Tomahawks continue to dominate in the remaining three games of the regular season, fans and family reach for those blankets, beanies and parkas, prepare yourself for post season mountain football!

Saturday, Sept. 28 the sophomore Tomahawks kicked off events at the fields of Tehachapi Youth Football & Cheer against the Cavaliers of Bakersfield in what would lead to another impressive showing and big win. Between an aggressive defense and a prepared offense, led by No. 28 Roland Pina, No. 42 Mikey Michael and No. 3 Tristan Smith, Tomahawks held their opponent to zero points and racked up 32 points.

“This was another great team win,” said head coach Cesar Meza. “The team came out with a winning mentality and were prepared for anything coming their way.”

In the second game of the day, junior varsity Tomahawks prevailed over the Talons of Bakersfield. No. 17 QB Moose Brus led the offense going 6/7, 116-yards passing with 2 touchdowns to No. 88 Devin Jackson. Back up QB No. 11 Gabe Sipes commanded two impressive drives for touchdowns and first touchdown pass in the season to tight-end No. 7 Tanner Salmon. Making their way into the endzone for the day as well were No. 24 Adrian Pina and No. 40 Logan Miles.

“As much as I was impressed by how well our offense moved the ball, I was even more impressed by how stingy our defense was holding the Talons to negative yards for the game,” said head coach Larry Root.

Flying around field and leading the team in tackles was No. 32 Thaddeus Dyer. Causing commotion and excitement on defense, No. 27 Peter Cusimano picked off a pass from Talons QB and returned it into the end zone for a touchdown. The thrill of game didn’t necessarily arrive from the 39-0 victory over the Talons, but perhaps from the looming bet of the season.

Defensive coach Luis Sedano has been promising the team street tacos if they could get a defensive touchdown, and linebacker Peter Cusimano didn’t disappoint!

For the final game of the day, varsity Tomahawks brought the house and shook up the Cavaliers of Bakersfield in a huge upset. Cavaliers offense faced a dominating Tomahawk defense led by No. 78 Christopher Paepke, No. 5 Ty’rion Davis and No. 54 Jorge Tirado, forces to be reckon with causing multiple turnovers, leading to 3 defensive scores in the game. With a paralleled offensive powerhouse, Tomahawks triumphed over the Cavaliers 56-0.

Away from their field for the day, freshmen Tomahawks traveled to North High School to face the Rockets. Though unable to finish with a win, Tomahawks freshman head coach Chris Bowman said “the score doesn’t tell the whole story.” No. 4 Jason Michael scored his first two touchdowns of the season. No. 23 David Sipes ran for approximately 175 yards. The offensive line fought hard and created holes to advance the run game. Defense battled and created a turnover, however the struggle for the young team was in the red zone.

“The boys left the field with their heads high, because they knew they fought to the last second,” said Bowman. Final score Tomahawks 14, Rockets 36.