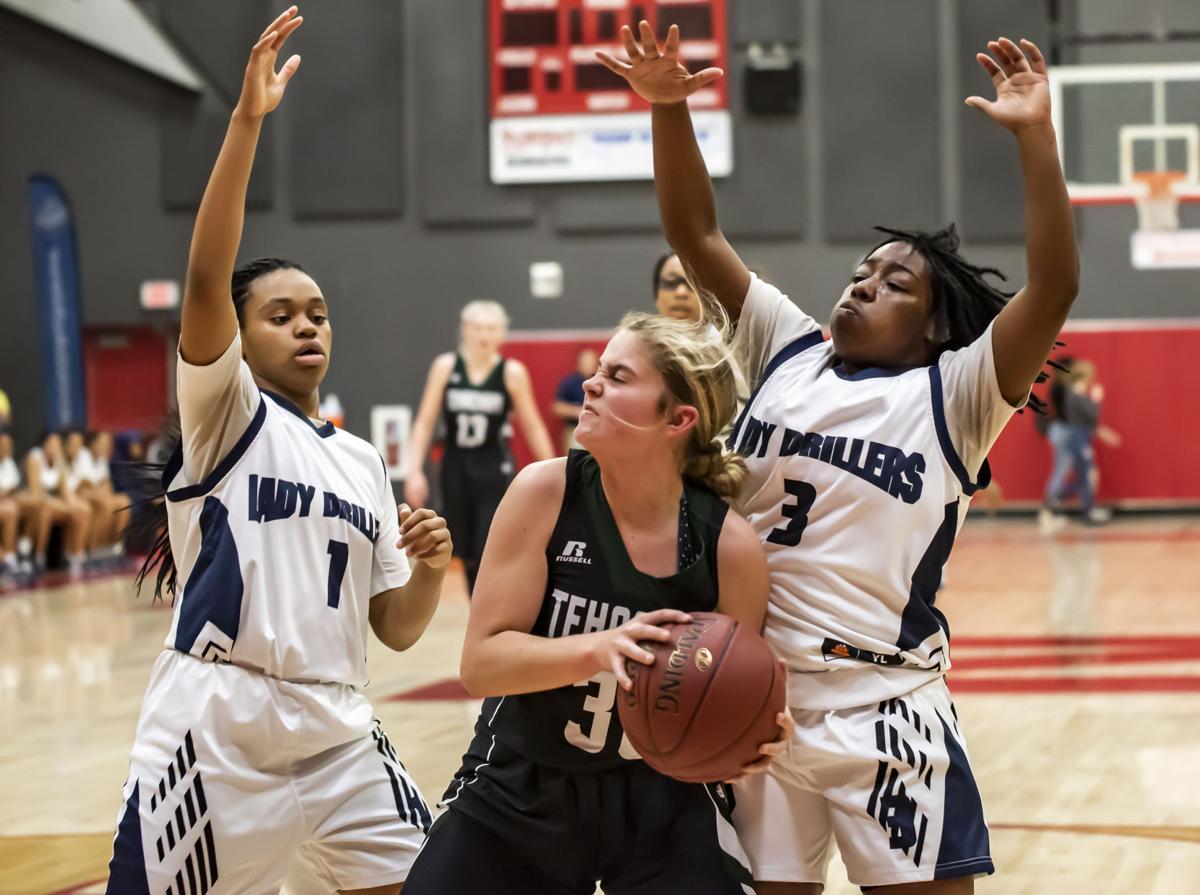 Laura LaMonte (30) from Tehachapi attempts a shot as Jayden Key (1) and Ray Vaughn (3) from BHS defend. 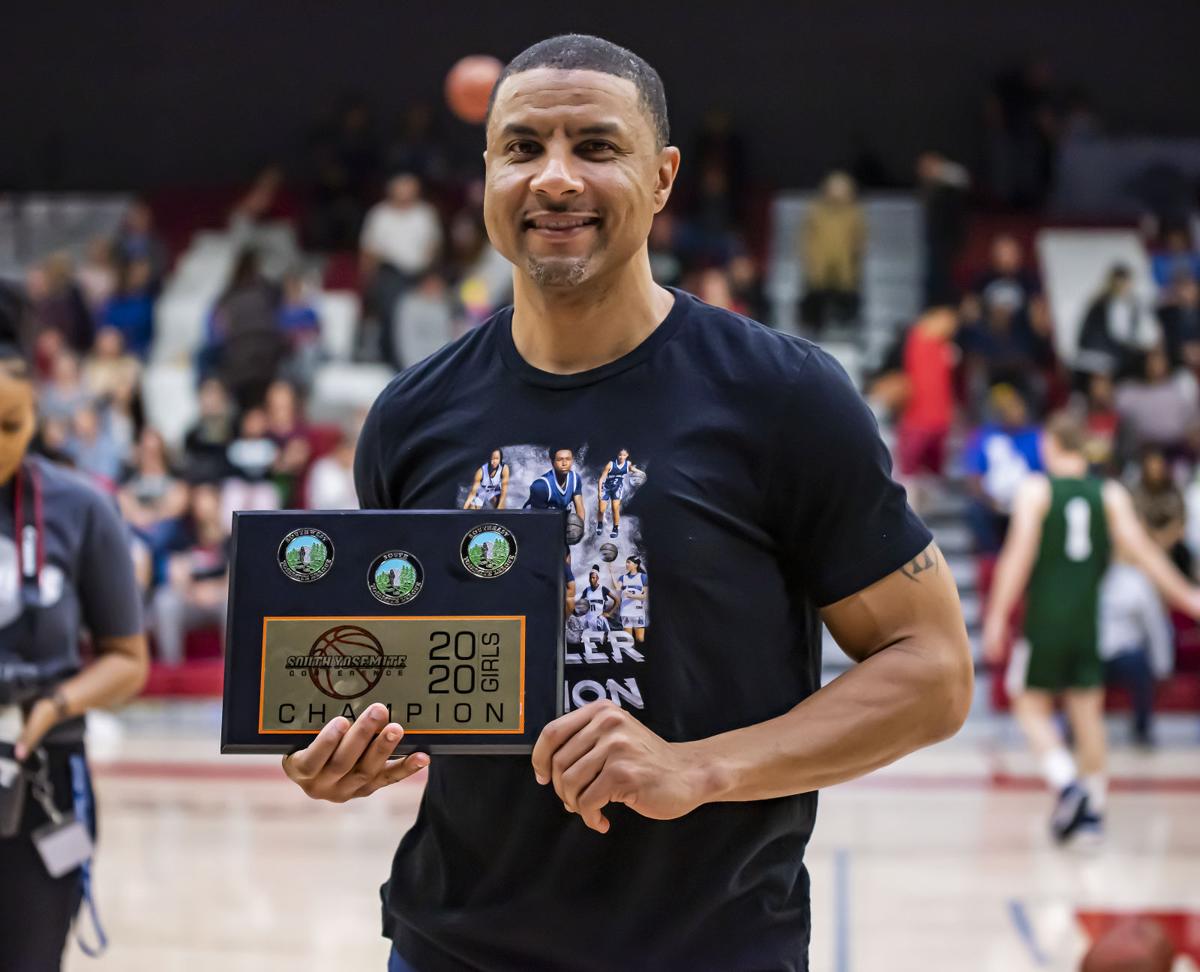 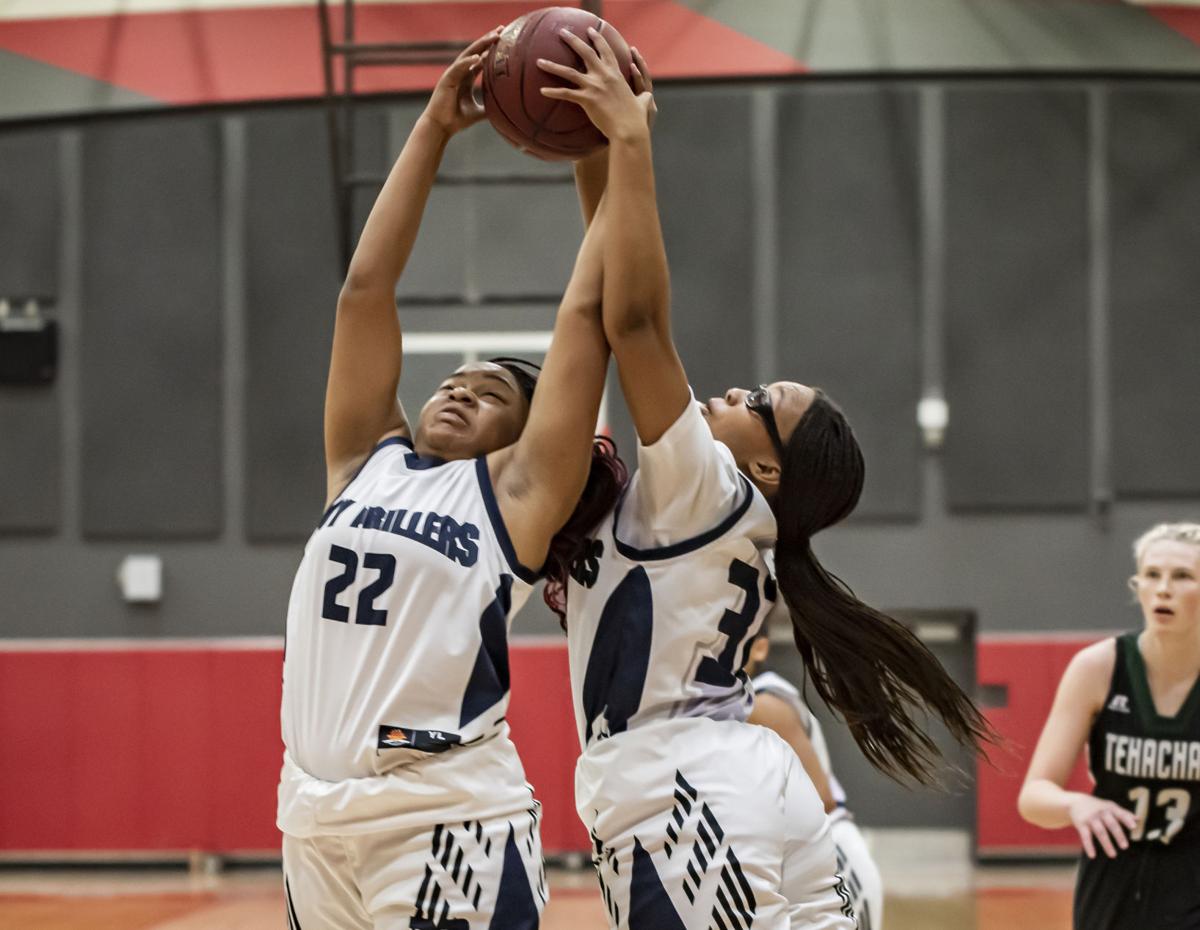 BHS teammates Erica Hayden (22) and Anaya Sanders (32) fight for a rebound against Tehachapi on Thursday night. 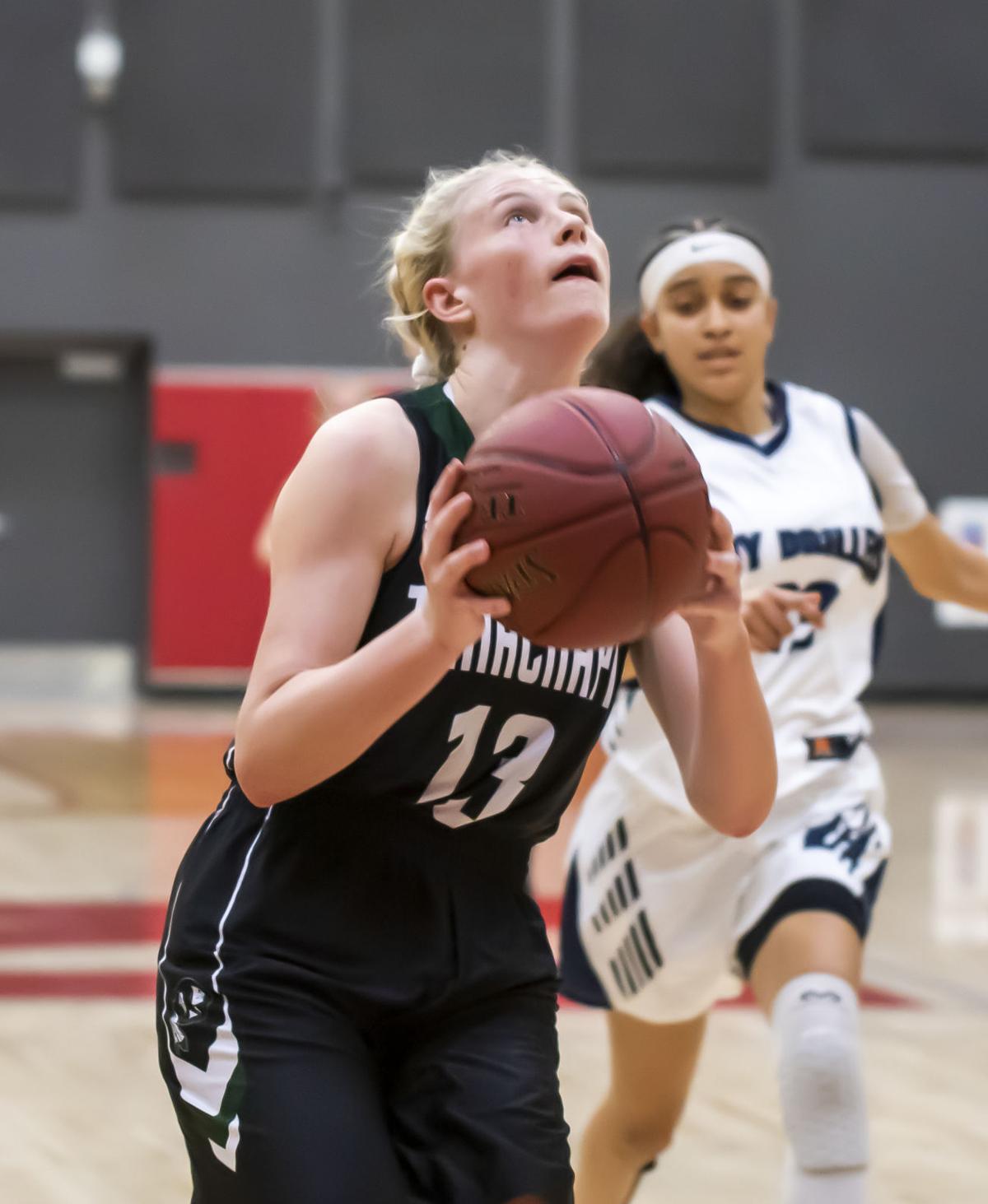 Teagan Thurman (13) from Tehachapi makes a layup against Bakersfield High School during SYC Championship action at the North high new gym on Thursday. 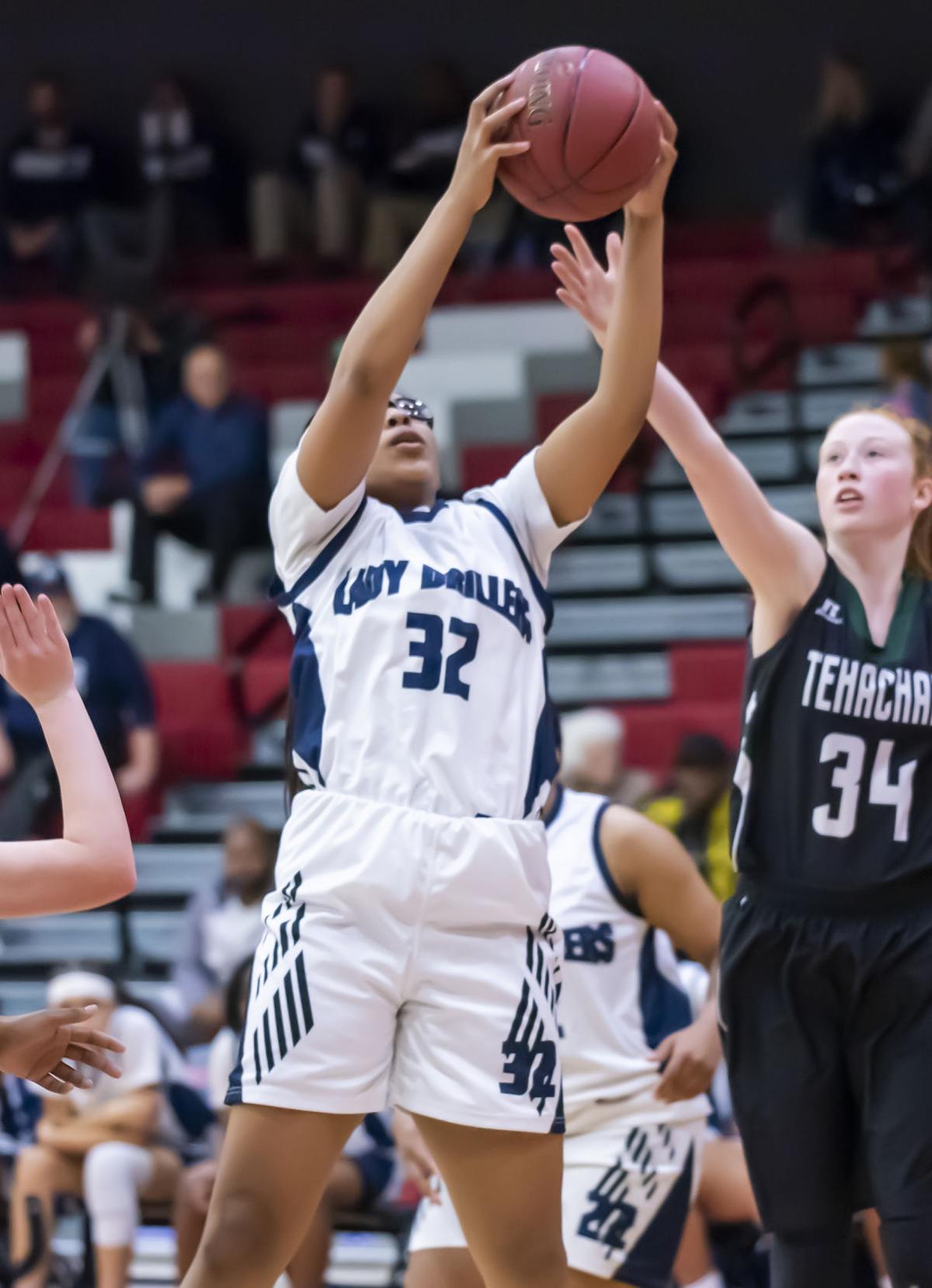 Laura LaMonte (30) from Tehachapi attempts a shot as Jayden Key (1) and Ray Vaughn (3) from BHS defend.

BHS teammates Erica Hayden (22) and Anaya Sanders (32) fight for a rebound against Tehachapi on Thursday night.

Teagan Thurman (13) from Tehachapi makes a layup against Bakersfield High School during SYC Championship action at the North high new gym on Thursday.

Following a runner-up finish in the inaugural South Yosemite Conference Tournament, the Tehachapi High School Lady Warriors will be the number-three seed in the upcoming CIF Central Section Division II playoffs this week.

The Lady Warriors played four games in four days as the lone non-Bakersfield school participating in the tournament held first at Golden Valley and then North High School. Despite the travel and consecutive games, Tehachapi managed three wins, setting up a rematch with Bakersfield High, which eliminated Tehachapi from the CIF playoffs a season ago.

Tehachapi defeated Garces on Monday, Feb. 10, 62-59 after the Rams battled back from an early deficit to force a close game in the final minutes. Garces tied the game with 1:41 remaining, but Aleiyah Bryant scored the final four points of the game for Tehachapi including a pair of free-throws in the final 10 seconds as Tehachapi avoided the upset by the 1-16 Rams. Tehachapi managed a much better showing the following night, defeating Mira Month 82-48. Teagan Thurman posted a triple-double for Tehachapi with 26 points, 14 rebounds and 10 steals. Bryant scored 17 on 7-of-8 shooting while Emily Williams added 14 on 6-of-8 from the field.

In the semifinals, the Lady Warriors outlasted host North High 58-51 as the Stars battled back from a 13-point halftime deficit. Thurman led Tehachapi with a game-high 25 points but fouled out of the game, allowing the Stars to make a push but once again Bryant stepped up for Tehachapi, scoring six points in the final quarter to seal the game for the Lady Warriors.

On Thursday, Feb. 13, Tehachapi fell 56-37 to Bakersfield High in the tournament final. In a rematch of last season’s Central Section Division II semifinal, the Drillers once again came out firing, jumping out to a fast 6-0 lead before building a 22-6 lead at the end of the quarter while holding Tehachapi to just two field goals. Tehachapi was only outscored by a combined five points in the remaining three quarters but the big first by the Drillers was too much to overcome as BHS handed Tehachapi their first loss since Dec. 28 and just the second defeat for Tehachapi this season. The Drillers now compete in the CIF Central Section Division I playoffs while Tehachapi competes in Division II.

Thurman led Tehachapi with 20 points but was limited to just 29 percent shooting by the Drillers’ defense, who also forced 20 THS turnovers. Junior Sara Heier added 9 for Tehachapi in the loss.

“This tournament gives us a little added experience, little bit of teaching us some grit to go on the road in hostile or neutral environments and playing against top-notch competition,” said head coach Jimi Perkins. “We’re just trying to keep the competitive mindset and accept every challenge and I think they’re doing it. We played well this week; obviously Bakersfield has set the bar pretty high of where we need to get to and that’s what we’re going to do, keep trying to get to where they’re at.”

Despite the setback, the three victories and competitive showing for Tehachapi helped them to a number-three overall seed in the CIF Central Section Division II playoffs which start this week. The Lady Warriors will host the winner of #6 Mission Prep (San Luis Obispo) and #11 Centennial (Bakersfield) who play Wednesday night. Tehachapi will host the winner on Friday at 7 P.M. at Tehachapi High School.

Perkins says the loss to BHS was timed perfectly heading into the Central Section playoffs.

“This is the team that knocked us out last year, they’re no longer in our path, they’ve moved up to D-1, to me it’s the best thing that could have happened to us, to get to play against the team that won it last year,” Perkins said. “This is our goal to win Central Section, something we set at the beginning of the season and now we know just what we need to work on; ball pressure, defensive mentality, mindset and just carrying out our plan and not to get wrapped up in the moment and flustered like we have in the past.”

It’s time for the playoffs for girl’s basketball and, as expected, Tehachapi fetched one of the top seeds in the Division II ranks of the CIF …