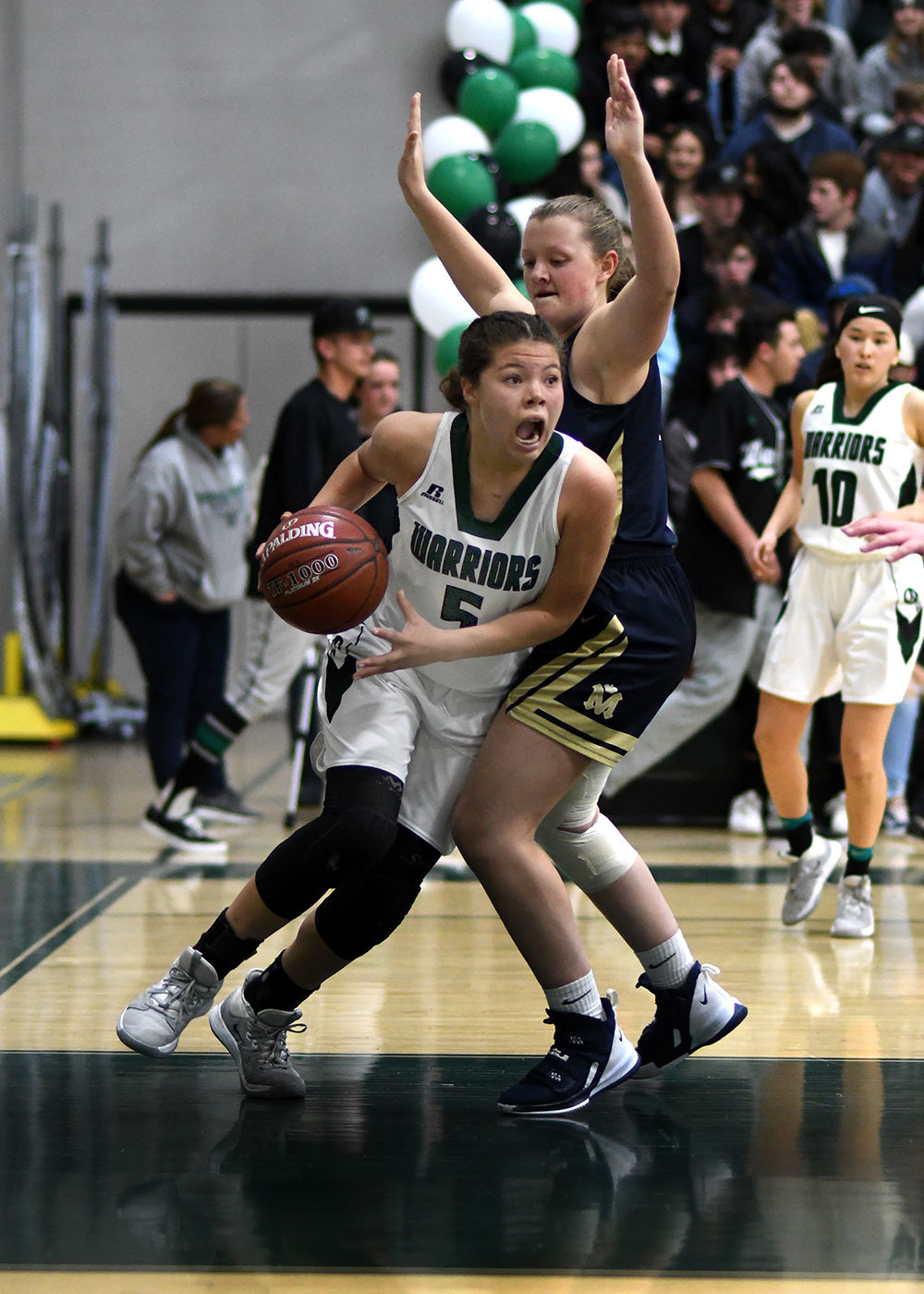 Senior forward Aleiyah Bryant drives the baseline after getting a rebound against Mission Prep. Tehachapi lost the game 55-52 in overtime to the Royals. 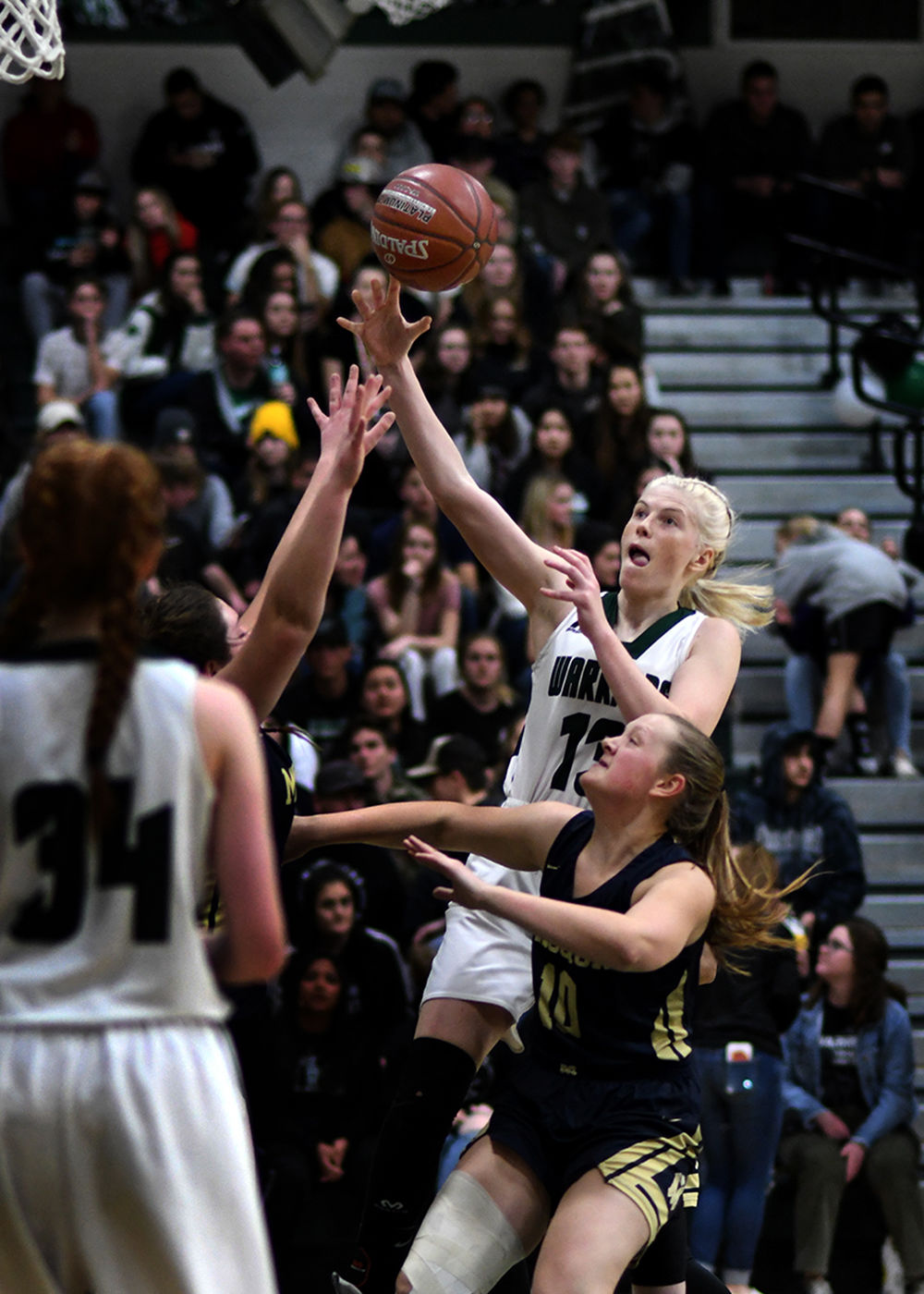 Senior forward Aleiyah Bryant drives the baseline after getting a rebound against Mission Prep. Tehachapi lost the game 55-52 in overtime to the Royals.

The Tehachapi Lady Warriors’ season came to an end in the quarterfinals of the CIF Central Section Division II Playoffs on Friday night with a 55-52 overtime loss to Mission Prep of San Luis Obispo.

Third-seeded Tehachapi, trailing for most of the game, used a 7-0 run to erase a seven-point deficit in the final 2:30 of the game to tie the contest at 45. The Royals would take a two-point lead on the next possession, but Tehachapi’s Teagan Thurman was fouled and connected on both free throws to tie the game at 47. After a Mission Prep turnover, Tehachapi had a chance to win the game, but the in bound pass to Thurman sailed past the senior forward and into the Royals’ hands. Mission Prep’s Kyra Harris had a three-pointer fall short at the buzzer to force overtime.

Tehachapi took their largest lead of the game at 51-48 following a three-pointer by Sara Heier early in the extra frame, but the Royals quickly tied the game when Harris converted on a layup and free throw following a foul. The game was once again tied at 52 when Aleiyah Bryant converted a pair of layups as well but Harris would take another three-point play to give the Royals a 55-52 lead with 12 seconds to play. Tehachapi’s potential game winning shot from Thurman fell short and the senior fouled out of the contest trying to get the rebound. She finished with 14 points to lead Tehachapi.

The Lady Warriors trailed 18-14 at the end of the first quarter and managed to hold the Royals to just two points in the second quarter but Tehachapi was limited to just four of their own points in the frame as they trailed 20-18 heading into halftime.

Mission Prep’s three-point shooting was the difference maker in much of the contest as Jojo Zaragoza made seven from beyond-the-arc while finishing with a game-high 24 points. Zaragoza made three three-pointers in the first quarter, three more in the third and another at a critical moment in the fourth quarter when Tehachapi took a brief lead. Harris added 12 for the Royals, who were seeded sixth entering the tournament and will move on to face second-seeded Yosemite this week in the semifinals. At the other side of the bracket, top seeded San Joaquin Memorial faces fifth-seeded Selma.

“A heart-breaking end to a great season,” said head coach Jimi Perkins. “Mission Prep is well-cached and a disciplined basketball team. That corner jump shot is the Lady Warriors’ kryptonite. We just can’t seem to defend the corners of the floor.”

“It was an exciting game and the girls showed the grit that they showed over and over again.”

Tehachapi’s season comes to an end at 18-3. They earned their first outright South Yosemite League championship, posting a 10-0 record in league play. The Lady Warriors also finished as runner-up in the inaugural South Yosemite Conference tournament hosted by the Kern High School District for all the Kern County Yosemite League teams.

X's and Arrows: Things weren't supposed to end this way, but Lady Warriors basketball is on the right path

Darn it, things weren’t supposed to end this way. A team with this much talent and an 18-3 record deserved better, but we know championships d…