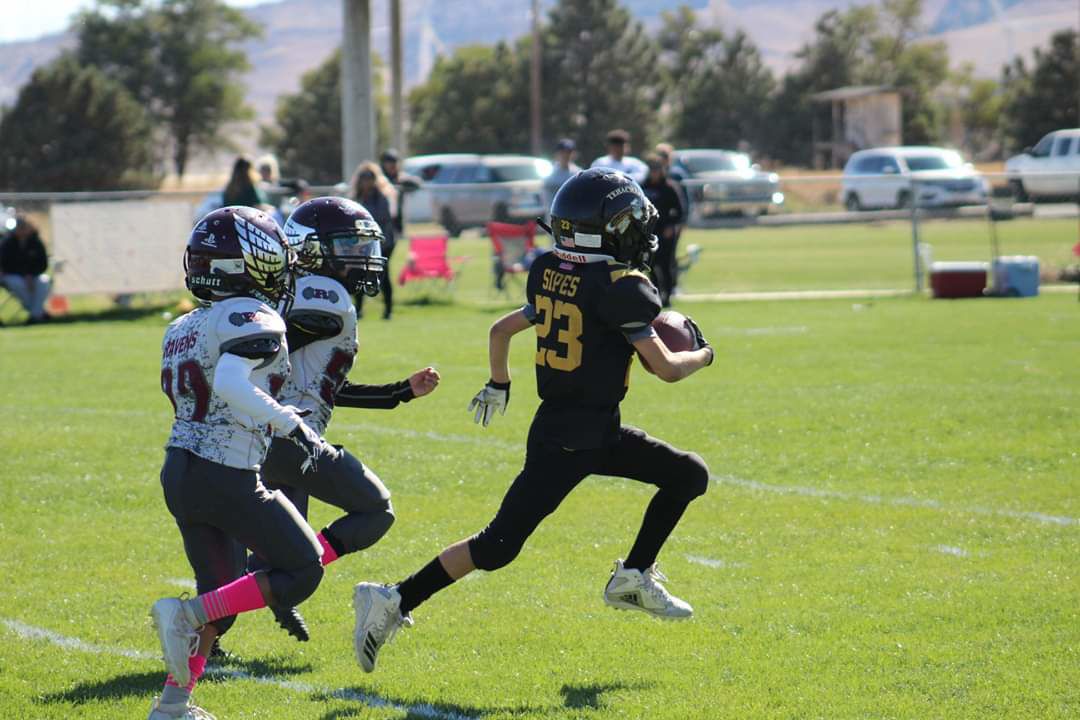 Freshman No. 23 David Sipes breaks away for a Tomahawk touchdown. 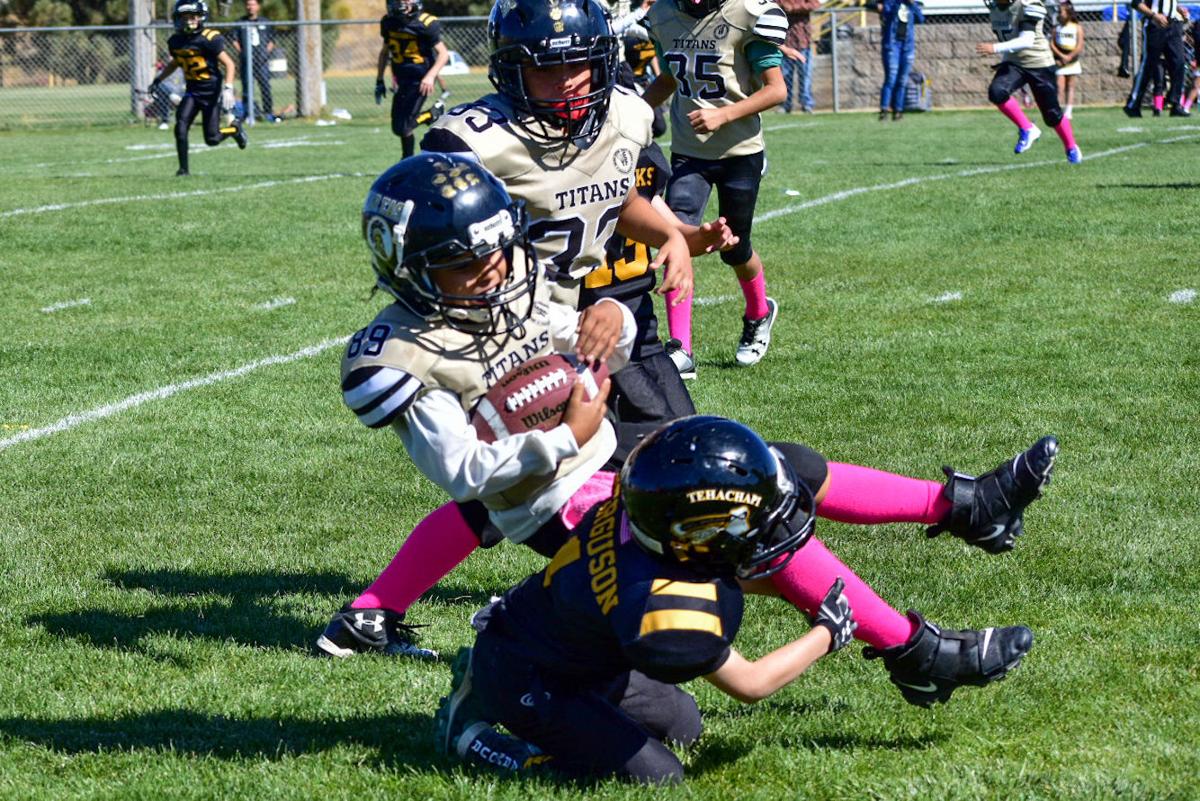 Sophomore No. 1 Caiden Ferguson for the tackle following a kick off. 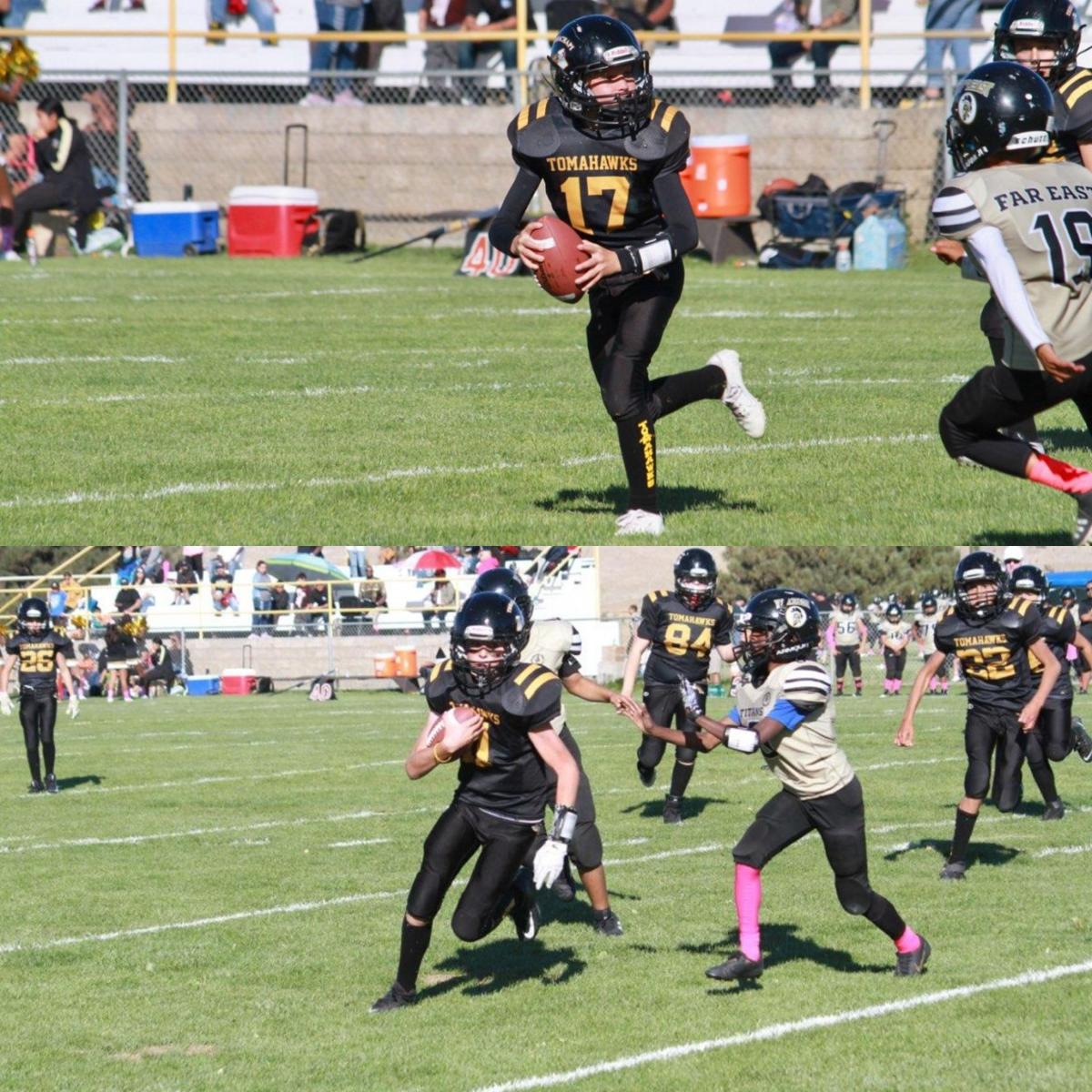 Junior varsity No.17 Moose Brus recovers a faulty snap to throw a pass to No.11 Gabe Sipes for the PAT. 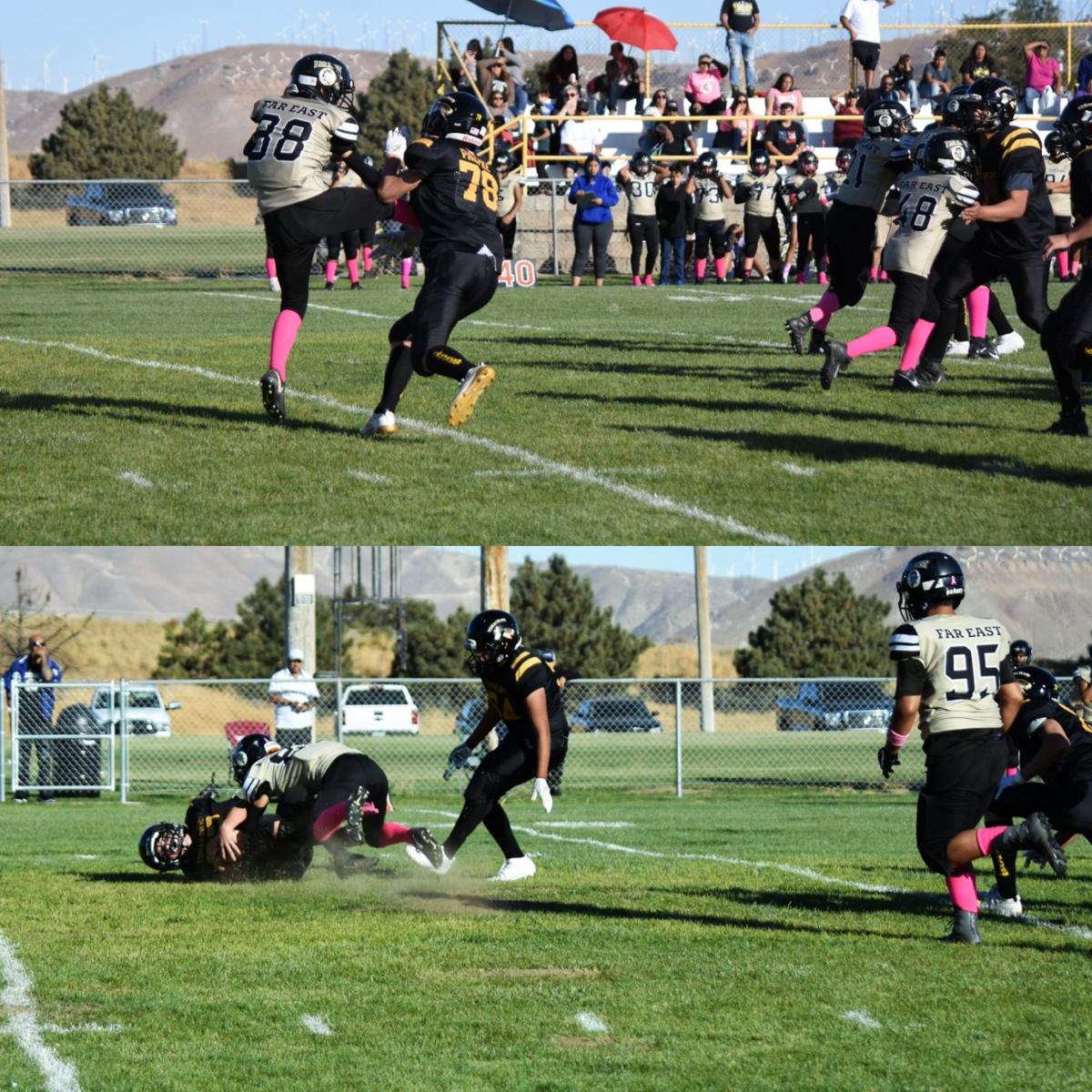 No. 78 Christopher Paepke knocks the ball down on a Titans punt and the speedy recovery by No. 32 Sebastian Peel sets the varsity Tomahawks up in excellent field position.

Freshman No. 23 David Sipes breaks away for a Tomahawk touchdown.

Sophomore No. 1 Caiden Ferguson for the tackle following a kick off.

Junior varsity No.17 Moose Brus recovers a faulty snap to throw a pass to No.11 Gabe Sipes for the PAT.

No. 78 Christopher Paepke knocks the ball down on a Titans punt and the speedy recovery by No. 32 Sebastian Peel sets the varsity Tomahawks up in excellent field position.

Saturday, Oct. 12 freshmen Tomahawks faced a tough cross conference opponent, the Ravens of Bakersfield. The first half was a back-and-forth contest; unfortunately the second half fell to several offensive mistakes that led to the Ravens victory. No. 23 David Sipes scored two touchdowns and No. 44 Kyden Pina scored all three extra points and his first touchdown of the season.

“Although it was a tough loss, it was a good warm-up game for the playoff-bound Tomahawks,” head coach Chris Bowman said. Tomahawks finish 21 to Ravens 47.

The 5-1 sophomore Tomahawks went to battle against the 5-1 Titans of Bakersfield. Without hesitation, Tomahawks defense shut down the Titans' first offensive series and with a hurry-up offense the Tomahawks struck first, scoring on their first drive. Both defenses were challenged in the first two quarters. Tomahawks took the half as an opportunity to make some necessary adjustments versus the Titans run game which proved to be a success.

“This Saturday showed all the hard work our players and coaches have been putting in,” head coach Cesar Meza said.

Key blocks on the offensive line by No. 72 Joshua Ramirez and No. 56 Holden Syverson made way for Tomahawk touchdowns and with big tackles by No. 60 Richard Cuellar and No. 34 Austin Rolow on defense, Tomahawks walked away with the win, 28 to Titans 14.

“We have a group of great players that listened to their coaches and with good sportsmanship put forth a huge effort to win the game,” assistant coach Jeremy Smith said.

Junior varsity Tomahawks came in expecting a pretty tough game against a bigger Titan team, but had no problem putting points up on the scoreboard. The Tomahawks had 193 yards on the ground and 78 yards in the air. They were led on the ground by No. 24 Adrian Pina with 9 rushes for 62 yards.

Five Tomahawks got into the end zone, No. 22 Ruben Sedano, No. 40 Logan Miles, No. 11 Gabe Sipes, No. 17 Moose Brus and No.32 Thaddeus Dyer. The defense had their hands full against a very big offensive line and speedy backs, but the nicknamed Tomahawk defense Killer Bees didn't disappoint, stop after stop until late in the game giving up only one touchdown.

The defense was led by No. 24 Adrian Pina with 7.5 tackles and a forced fumble, No. 31 Wade Brooks with 4 tackles and interception in the Titans end zone, No. 42 Liddon Scott with 4 tackles, No. 26 Carter Kolesar with a 60 yard interception, No. 52 Kenneth Pitt for a fumble recovery and No. 27 Peter Cusimano with an onside kick recovery. Tomahawks defeated the Titans 35-6.

Varsity Tomahawks played hard in the fight against the Titans. The fight unfortunately was won by the Titans capitalizing on crucial errors made by the Tomahawks. Falling short in an 8 to 28 loss, the 6-2 Tomahawks look forward to preparation in the coming week for the final regular season game against the Bullpups of Bakersfield.

The Tomahawks send a tremendous thank you to Sequoia Christian for his unique performance of our nation's anthem on his electric guitar.

Saturday, Oct. 19, the Tomahawks travel away for their final games in the regular season. Freshmen play on the field of Bakersfield Christian High School against the Spartans at 9 a.m. The remaining teams travel to Golden Valley High School in games against the Bullpups, sophomores at 2:30 p.m., junior varsity at 4:30 p.m. and varsity at 6:30 p.m.