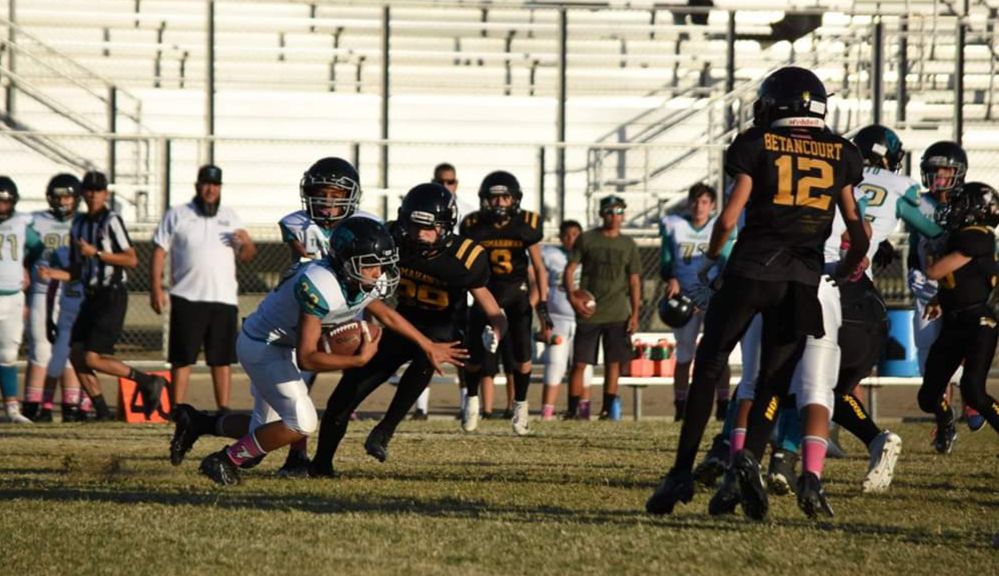 No. 89 Kaleb Songer closes in on a Thunder running back for the tackle. 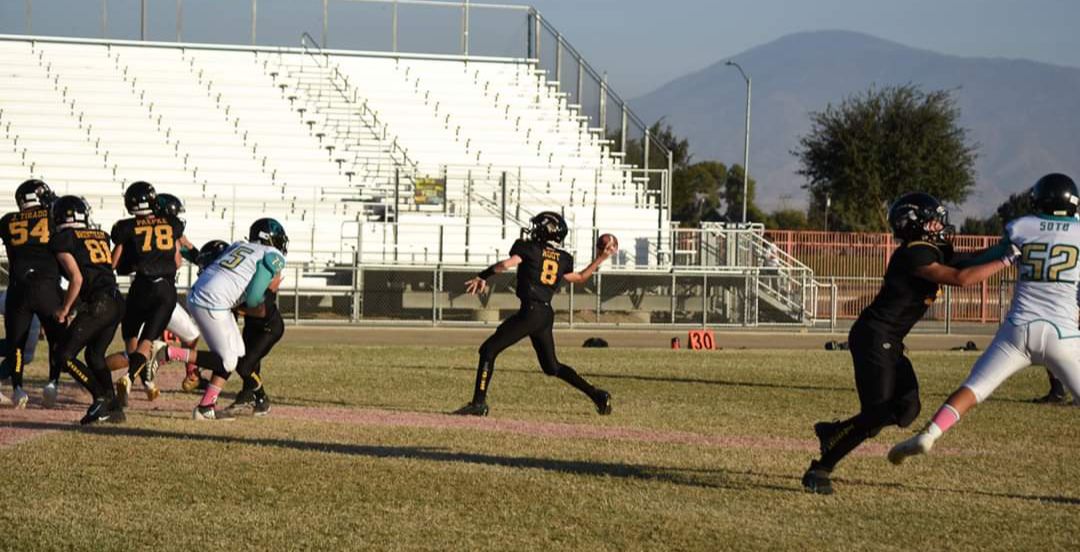 Varsity offense and quarterback No. 8 Jacob Root prepares to throw. 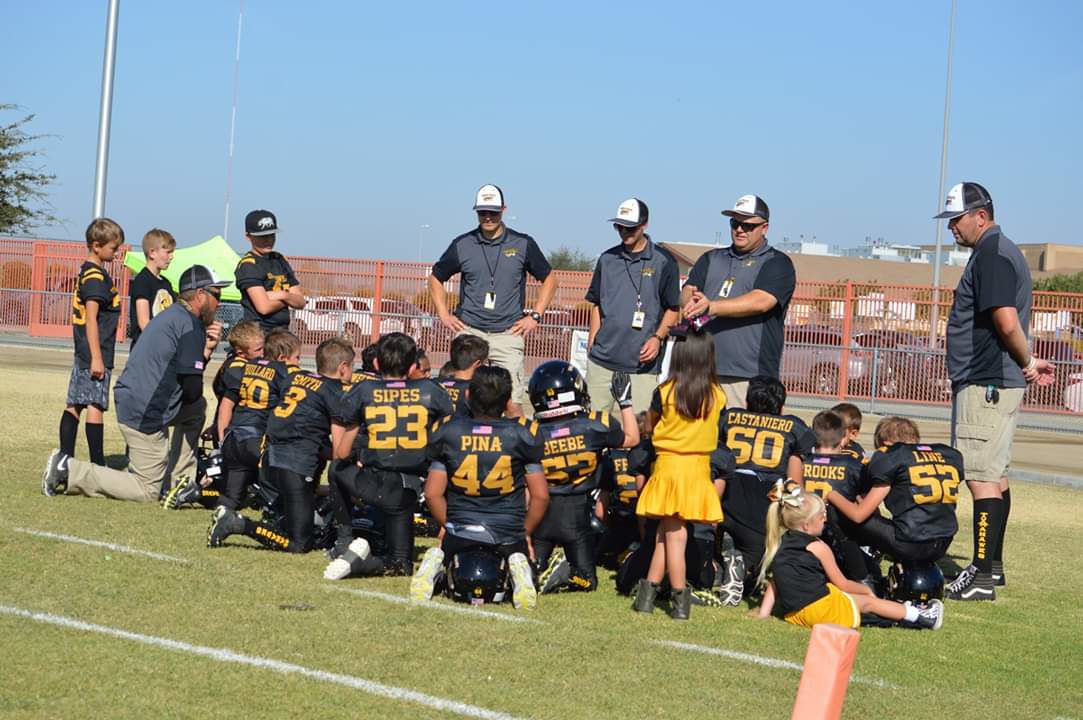 Freshman Tomahawks, coaches and water kids during halftime against Thunder. 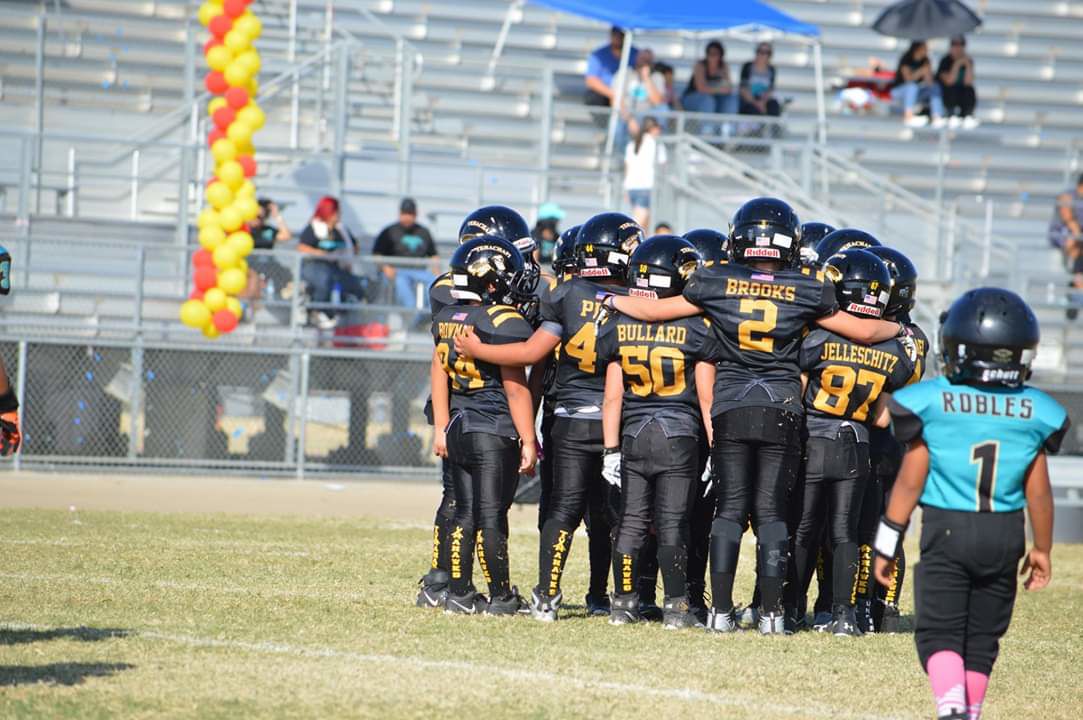 Freshmen Tomahawks unite in their final game during the 2019 season.

No. 89 Kaleb Songer closes in on a Thunder running back for the tackle.

Varsity offense and quarterback No. 8 Jacob Root prepares to throw.

Freshman Tomahawks, coaches and water kids during halftime against Thunder.

Freshmen Tomahawks unite in their final game during the 2019 season.

On Saturday, Oct. 26, on the field of Mira Monte High School in Bakersfield, in game one of playoff competition, third-place varsity Tomahawks and sixth-place Thunder of Delano delivered just that and more. In an all-out, four quarter dog fight, the Tehachapi crowd would be left standing on their feet in the final three minutes of play, left holding their breath with 45 seconds remaining, rejoicing with only 16 seconds to count down and anxious with one second on the clock.

As a result of a 36-yard pass from QB No. 8 Jacob Root to receiver No. 89 Kaleb Songer, the Tomahawks would take the lead with 16 seconds remaining in the final quarter. Thunder with final possession, one second and one play was shut down by Tomahawk defender No. 50 Hoben Hoge, advancing the varsity Tomahawks into game two of Golden Empires National playoffs.

“The team faced a lot of adversity but played with heart and pulled out the win with a big play at the end of the game,” assistant coach Chris Jones said.

The Tomahawks defeated Thunder 23 to 20 and move on to face their next opponent, Southwest Mojo of Bakersfield, on Saturday, Nov. 2.

Freshmen Tomahawks did not have the same luck in their playoff fight against Thunder. In their 6 to 20 loss, the Tomahawks did not leave the field empty-handed. The 21 young freshmen athletes will take with them the teachings and trainings of their first year of football, the fundamentals, the brotherhood, the passion for the sport.

“I would like to thank all the parents and players who stuck with us through this first year,” head coach Chris Bowman said. “The boys did a good job having patience with the coaches as we learned the nuances of coaching 7- and 8-year-old kids. I look forward to seeing how much our returners improve next year and wish all the kids going up to the sophomore level good luck.”

Game locations and times are yet to be determined. Follow the Tomahawks on Facebook at Tehachapi Youth Football & Cheer for updated information on future games.