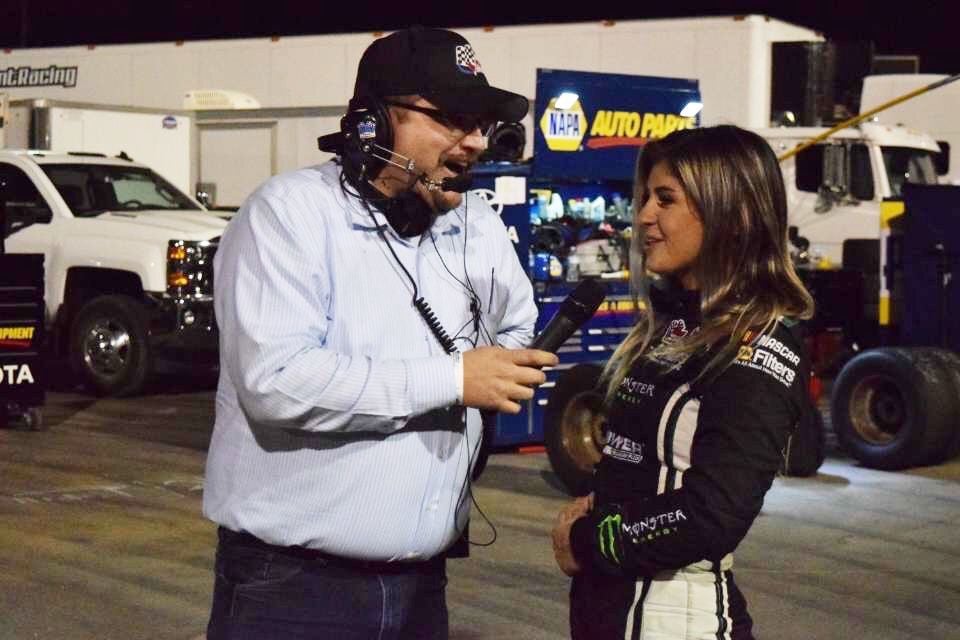 Motorsports has played a major role in my life. It was one of the first sports I covered professionally out of college, eventually landing my first radio show at Mesa Marin Raceway in Bakersfield and a track announcer gig to go along with it. I’ve spent many Saturday nights with the smell of racing fuel and the ringing of horsepower rumbling through my ear drums; those were the days.

When they closed that track in 2005, a part of my soul was buried in that east Bakersfield soil. I spent the last two seasons, 2004 and 2005, there every Saturday night, covering short track racing, meeting some great people and becoming part of the local racing family. I even met my wife at the track; she was employed in the front office when they first hired me. Yes, it’s the perfect Kern County love story — girl from Oildale meets boy from Tehachapi at racetrack. You can’t make this stuff up.

So last week I was asked by Steve Hughes, my announcing partner 14 years ago, to return to the new speedway, Kern County Raceway Park, to help with coverage of the annual October Classic. Steve and I remained friends during this long layoff between races for yours truly. He’s since landed at KCRP doing just about everything under the sun for that facility. He needed a pit reporter and asked me months ago to take part. Fitting it was themed as a “throwback weekend” with drivers sporting retro paint schemes and employees wearing old Mesa Marin gear to get into the spirit of the event. We might as well get the old band back together, too.

It has been 14 years since I covered a short track race, but I felt like a 25-year-old kid again walking up to the tower as the sounds of cars entering and exiting turns on the half-mile oval served as a symphony in the background. That smell of burnt fuel and high-octane exhaust floating in the warmth of the Bakersfield air makes the untrained nose turn away. Those of us who have lived that racing life can’t get enough of it.

To make things even better, nearly every member of the old Mesa Marin team, from safety crew, flag men, administration and race officials are now employed at KCRP. It was like a homecoming for an estranged family; if you’ve spent any time around grassroots racing, you understand that connection. Your race family is just a little different than everyone else.

It was great to see my people again, to experience that race day hustle in the pits, to step out of my comfort zone a little to pick up a craft that has sat on the shelf for more than a decade. The brain is a powerful tool, however; it didn’t take long for my eyes to register things I was seeing on the track, for my ears to realize that a motor didn’t sound quite right, to figure out strategies and use terms I haven’t uttered in years. It was a lot of fun.

It’s tough to beat the emotion of a victory lane celebration as I interviewed winners like Derek Krause, who claimed the victory in the NASCAR K&N West Series race, all but sealing his series championship. The Spears Southwest Tour Series main event didn’t disappoint as well with Linny White claiming his second victory of the season using some old-school racing techniques in his old-school paint scheme car to get the win, not leading until the 90th lap of a 100-lap feature.

It was plenty of work. I’m certainly not 25 anymore, so dodging pit equipment, sprinting across the infield from pit road to the spotter’s tower, hopping over the safety wall and being in the right position took a little more of a toll on me than it used to. But it’s a small price to pay for a good time.

Good thing this isn’t a career for me anymore, just a chance to see old friends, pick up the tools of your former trade and be thankful to all of those who played a role in shaping the human being you have become. There’s a lot of people and places that have taken part in that shaping, and many of those people and those places happen to be connected to the American tradition of short track racing.