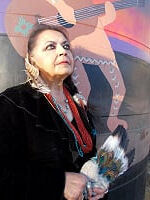 SilentWolf stands next to her recently completed mural. 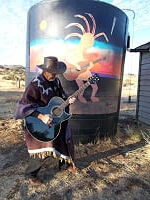 Jim Coward was the inspiration to SilentWolf's recent mural she painted on her neighbor's water tower.

SilentWolf stands next to her recently completed mural.

Jim Coward was the inspiration to SilentWolf's recent mural she painted on her neighbor's water tower.

One local artist said she was looking for the perfect time to paint a mural on her neighbor’s water tank. SilentWolf called it her “pandemic project.”

Recently, SilentWolf completed a mural on her neighbor's water tank, something she had been planning to do for some time, but never got around to it until the lockdown.

"I wanted to paint this water tank for years. The pandemic gave me the extra push to do so. The title is Highline Kokopelli, I have dedicated it to Jim Coward," said SilentWolf.

Growing up in New Mexico, SilentWolf remembers huge water tanks throughout town, each one painted with some unique mural.

"It was her idea, and she came up with everything. It is just perfect," said Coward, owner of the water tank and neighbor of SilentWolf.

Kokopelli is a fertility deity usually depicted as a humpbacked flute player, often with feathers or antenna-like protrusions on his head. He is the Zumi Native American symbol of joy and uplifting qualities.

In her depiction of the deity, SilentWolf painted Kokopelli playing the guitar, something Coward has mastered.

"He is, in my opinion, the best lead guitarist in Tehachapi," SilentWolf said.

Coward said he has been playing the guitar almost since birth. His father was a professional guitar and lap steel player.

"My dad had a 1952 Telecaster, and when he sold it, it had my teeth marks on the end of the neck." Coward said, adding, "He needed somebody to back him up and I got elected as the oldest."

The mural measures approximately 10 feet high by 8 feet wide, and can be seen from the road on Highline. The background features the Organ Mountains in Las Cruces, N,M., a location near and dear to SilentWolf's heart.

"I wanted to make this a gift to all who are dealing with COVID and still find the time and strength to live life to the fullest," SilentWolf said.

Her final paint strokes to the piece were made earlier this month.

"The last thing I painted was my signature because once your signature is in place, the piece is done," SilentWolf said.

Said Coward, "I think this (mural) is just awesome. Every time I turn into the driveway, I get a thrill."