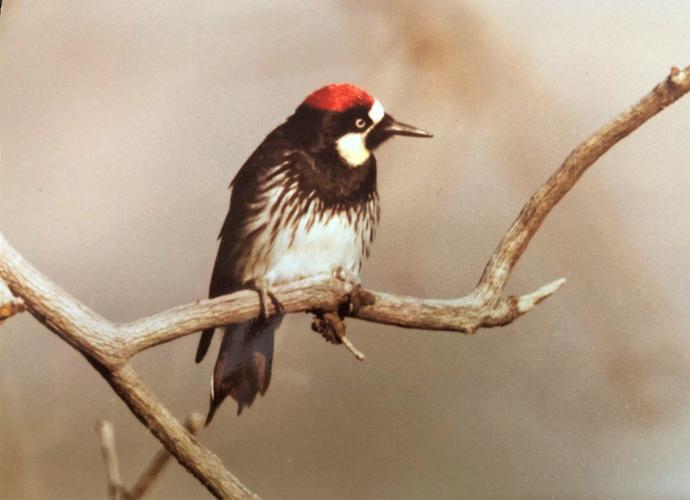 An Acorn Woodpecker pauses on an oak limb. This one is a male – the red cap touches the white forehead. 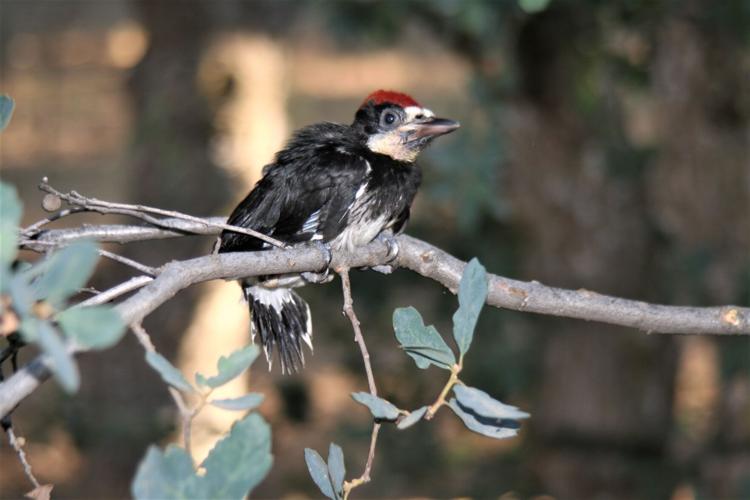 A baby woodpecker that still has some pin feathers. 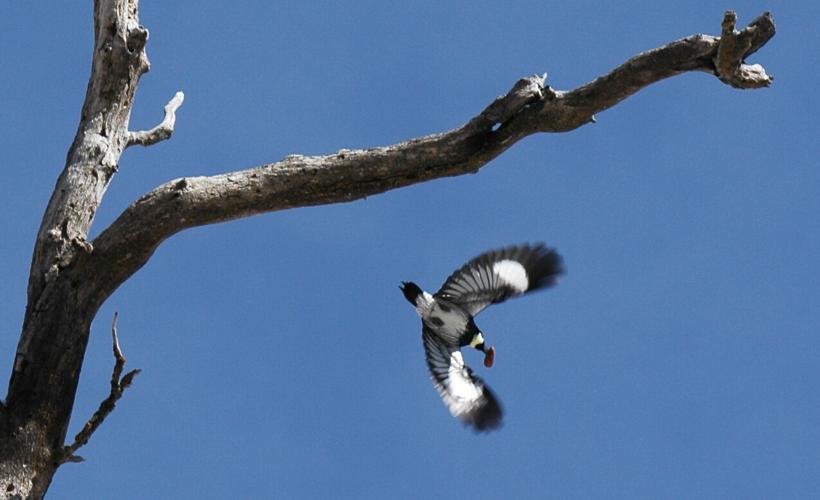 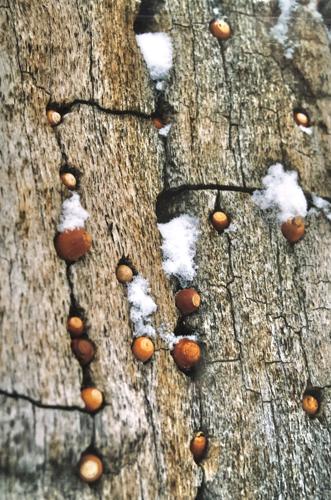 Acorn Woodpeckers gather and store acorns in dead wood like this, so that when the snow falls and insects are scarce, they still have something to eat. 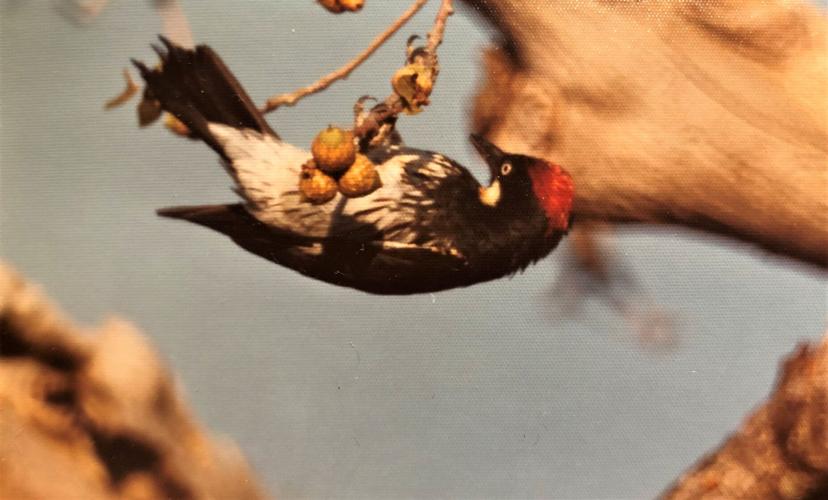 An Acorn Woodpecker looks for insects among developing acorns. This one is a female – the red cap is smaller and doesn’t touch white.

An Acorn Woodpecker pauses on an oak limb. This one is a male – the red cap touches the white forehead.

A baby woodpecker that still has some pin feathers.

Acorn Woodpeckers gather and store acorns in dead wood like this, so that when the snow falls and insects are scarce, they still have something to eat.

An Acorn Woodpecker looks for insects among developing acorns. This one is a female – the red cap is smaller and doesn’t touch white.

“Acka! Acka! Acka!” is a bird call familiar to those who live in the oak woodlands that are a common habitat type in the Tehachapi Mountains. This ubiquitous sound is produced by the widespread Acorn Woodpeckers.

These industrious, noisy birds are one of the most frequently seen — and heard — birds of the oak woodland. Acorn Woodpeckers have black backs and red caps, with creamy white on their forehead and chin, and their bellies are white with black streaks.

Acorn Woodpeckers are most noticeable in flight, as they have a bright white patch on the underside of each wing and under their tail. These field marks, as ornithologists call them, probably serve to make the birds instantly recognizable in flight to their fellow Acorn Woodpeckers, and these flashes of white also make these energetic birds easy for people to identify.

While Acorn Woodpeckers are successful and quite common, their living style is definitely not common: Acorn Woodpeckers form colonies that live cooperatively, akin to a wolf pack, and they gather acorns, raise young and guard their territory together.

These colonies occupy an area of about 15 acres, and the dozen or more birds that comprise each colony will work as a team to feed the young each year, which are raised in a single nest that may contain the eggs of different females in the colony.

Baby woodpeckers, like the young of most songbirds, are fed primarily insects. This food source is highly nutritious and provides the baby birds with the protein that they need to grow and develop rapidly.

While they are known as Acorn Woodpeckers for the large numbers of acorns that they collect and store each year, Acorn Woodpeckers actually prefer to eat insects and other arthropods, and they can catch flying insects on the wing.

Their scientific designation is Melanerpes formicivorous, and it is less apt than many ornithological names. The genus name means “black creeper,” and while they are partially black, these raucous, unsubtle birds could hardly be described as creepers.

The specific name formicivorous means “ant eater,” and while Acorn Woodpeckers do eat ants, they are not as known for this as their relatives the Northern Flickers, which have exceptionally long tongues and specialize in eating ants and beetles that they gather from the ground.

Acorn Woodpeckers, like other birds that eat insects, must switch to another food source in winter when invertebrates become scarce. Acorn Woodpeckers turn to the acorns produced by California’s abundant oak trees, and they gather these in autumn and store them in dead limbs, standing snags, utility poles, and even cedar or redwood siding on houses, a practice that does not endear them to homeowners.

Acorn Woodpeckers have been known to store as many as 50,000 acorns in a single large tree. The drilling of storage holes for their acorn cache does not harm living trees, for the woodpeckers only excavate little acorn lockers in dead wood, not live tree tissue.

Members of an Acorn Woodpecker colony do their best to match each acorn with an appropriate-sized hole, so that the fit will be very tight, which protects against robbing by squirrels, jays, etc.

Acorns shrink as they dry, and Acorn Woodpeckers will check their granaries, and if they find a loose acorn that no longer fits tightly, they will either eat it or move it to a smaller hole for safekeeping.

Acorn Woodpeckers zealously guard their territory, and the granaries that represent all the hard work they’ve put in to collect acorns. If dominant females die and there is a vacancy in a territory, other Acorn Woodpeckers will arrive and fight viciously to claim the neighborhood. These fights can last for hours over a period of days, and Tehachapi residents have occasionally witnessed their brutal battles, which can leave combatant birds injured, sometimes fatally.

The Nuwä (Kawaiisu or Southern Paiute) name for woodpecker is tatarage'eb, pronounced tah-tah-rrrah-GEH-eb with a rolling of the "r"s, which is an approximation of the “rat-tat-tat” drumbeat sound that woodpeckers make as they drum on dry, resonant wood.

Acorn Woodpeckers were the inspiration for the cartoon Woody the Woodpecker, after animation producer Walter Lance and his wife honeymooned at June Lake in Mono County in 1940 and were annoyed (and presumably entertained) by these noisy birds. Lantz is said to have patterned Woody’s laughing vocals after the sound of Acorn Woodpeckers, though Woody’s appearance is based on a different species of woodpecker, the Pileated, which is a large bird with a red crest.

Acorn Woodpeckers are lively, entertaining birds to observe, and their rambunctious vocalizations are part of the soundtrack of life in Tehachapi’s oak woodlands. I’m always glad to hear their distinctive calls echoing among the oaks. . .