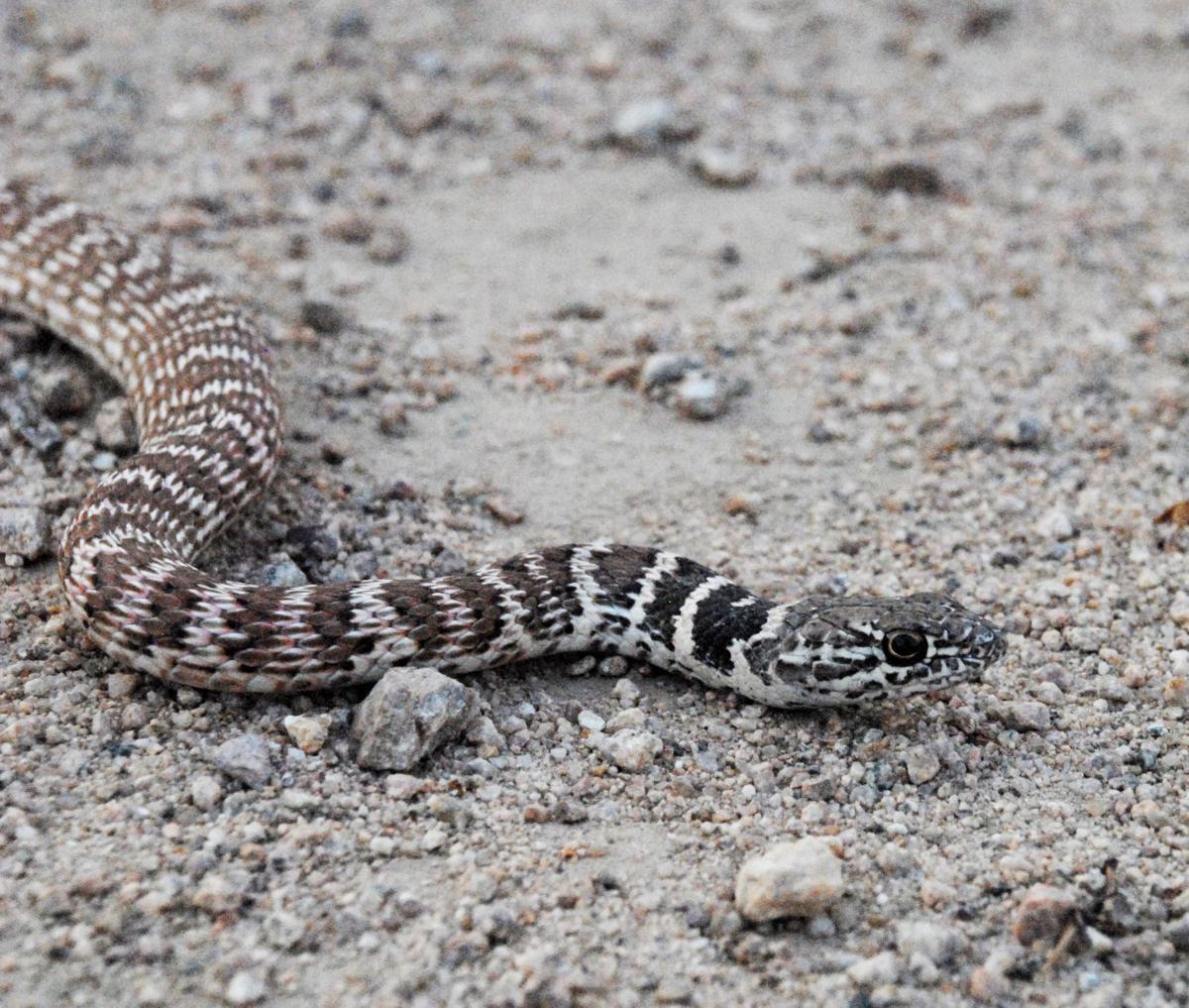 A Red Racer pauses briefly along a dirt road on the Mojave Desert floor about 15 miles east of Tehachapi. 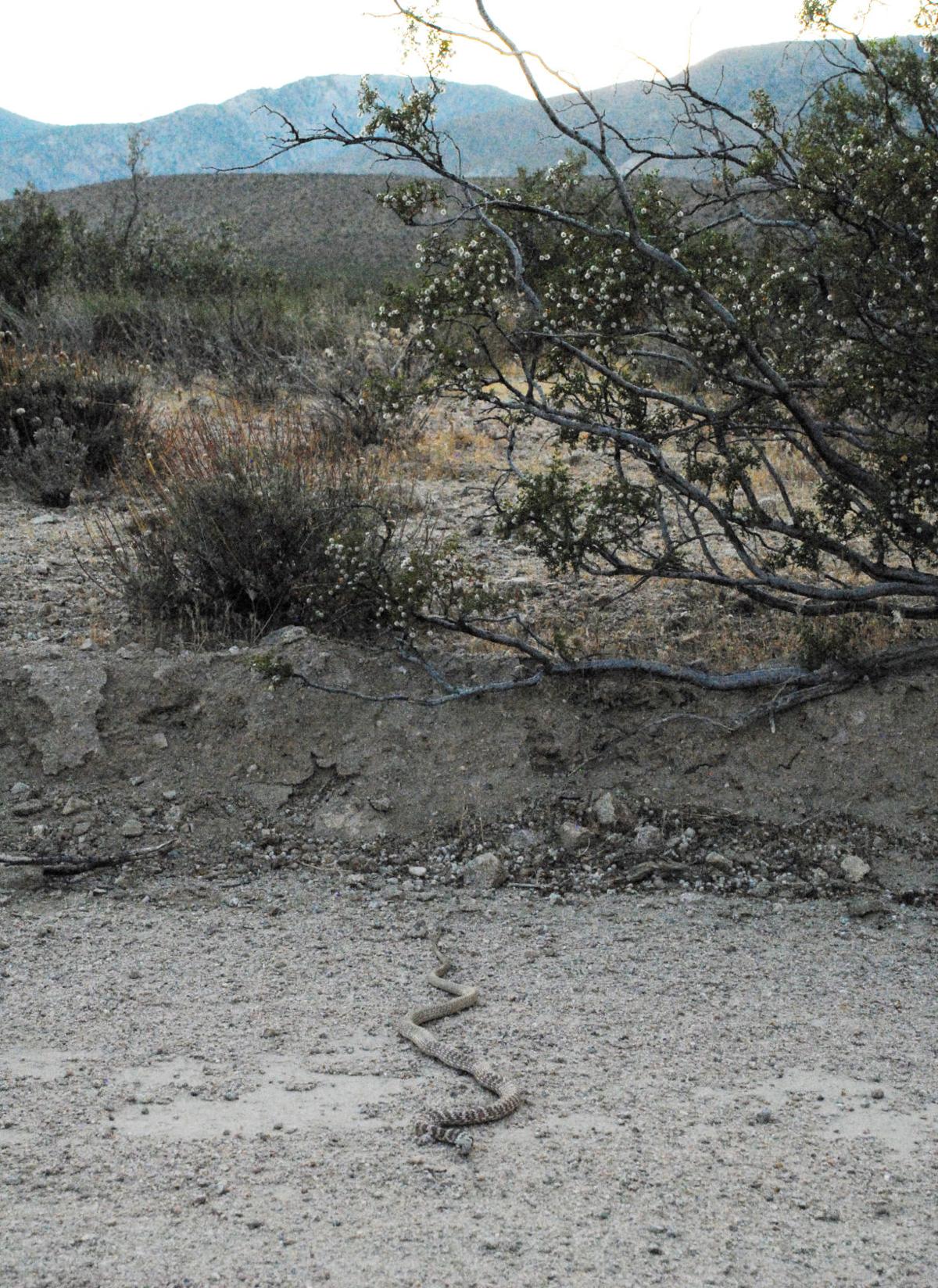 A Red Racer not far from the sheltering branches of a California Juniper. 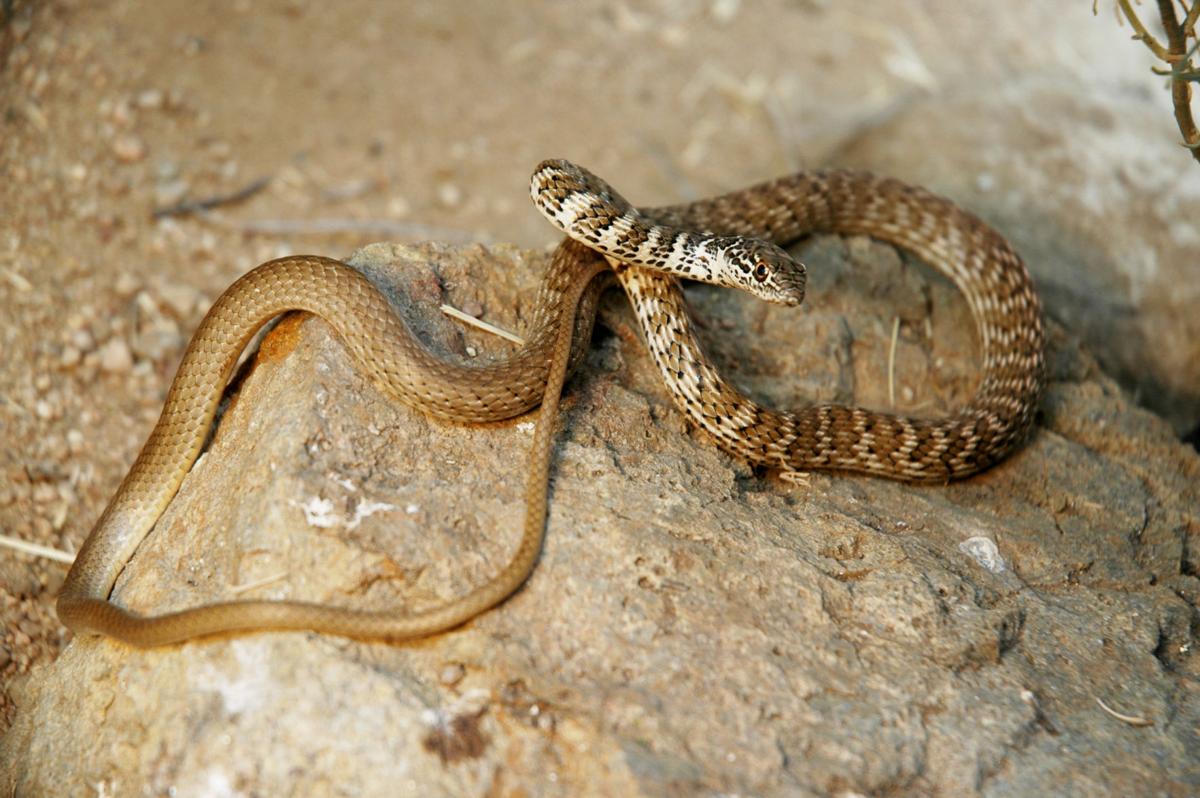 A San Joaquin Coachwhip, another subspecies of Coachwhip, that was found along Bena Road near the Arvin turnoff.

A Red Racer pauses briefly along a dirt road on the Mojave Desert floor about 15 miles east of Tehachapi.

A Red Racer not far from the sheltering branches of a California Juniper.

A San Joaquin Coachwhip, another subspecies of Coachwhip, that was found along Bena Road near the Arvin turnoff.

Even though almost all North American snakes avoid humans when given the chance, occasionally you can encounter ones like Great Basin Gopher Snakes, California Kingsnakes or even rattlesnakes that get discovered before they can vanish. That doesn't happen very often to the Red Racer, a snake so fast that they can quickly disappear even if you do see them before they see you.

Red Racers (Coluber flagellum piceus) are found in Eastern Kern County, including in the drier, more arid parts of the Tehachapi Mountains where the foothills meet the Mojave Desert floor. They are very slender, long snakes that are typically three to five feet long, though they can even reach eight feet in length.

These harmless snakes have small heads with relatively large, keen eyes, and very long thin tails. Rather than being ambush predators, remaining motionless and waiting for prey to happen along like many snakes, Red Racers typically hunt by crawling along with their head held high above the ground, using their good eyesight to spot something edible.

Red Racers eat lizards, invertebrates like grasshoppers, small mammals, birds and eggs, and even carrion. They are sometimes found run over on roadways, in part because of their willingness to eat small dead creatures that have themselves been killed by cars. Red Racers are good climbers, and will search for bird nests in shrubs and small trees, or simply conceal themselves in the elevated safety of branches and foliage.

There is a closely related snake — same genus, different species — called a San Joaquin Coachwhip (Coluber flagellum ruddocki) that is found in the San Joaquin Valley and the more western part of the Tehachapis, and these two species sometimes intergrade (crossbreed with varying levels of genetic mixing) in Eastern Kern County. This page includes photos of a Red Racer that my brother George and I found basking near Cache Creek last week, and a San Joaquin Coachwhip that was found along Bena Road near the Arvin turnoff.

The name Coachwhip is an apt one, for these snakes are very long and slender and the scale pattern on their tails gives a braided appearance, like a gradually tapering hand-braided leather whip. Red Racers also have a similar appearance on their tails. Both Red Racers and San Joaquin Coachwhips are among the six different subspecies of the widespread Coachwhip snake (Coluber flagellum) which is found throughout the lower half of the U.S., from California to Florida. Of the six subspecies, only Red Racers don't include the term "Coachwhip" in their name.

Coachwhips, regardless of which specific species, are considered the fastest snakes in North America, and it is stunning how fast these creatures can move without the benefit of legs, feet or wings. If you visit the Tehachapi News website, you can view a brief video that I took of the Red Racer that we encountered last week on a dirt road northeast of Cache Creek. My brother gently touches the snake's tail with a small stick, and after a moment's hesitation, it accelerates and speeds away into the safety of a desert shrub.

Red Racers and San Joaquin Coachwhips are champion sprinters that don't particularly like being captured and held, and some individuals may strike if you happen to catch them (an unlikely prospect), but their teeth are tiny and they can't injure you. Typically you only have a few moments to admire them on the ground before they're off and gone.

Snakes instinctively inspire fear in many people, but the slender Red Racers are the greyhounds of the snake world and they seldom linger around long enough for anyone to get frightened by them.

A Red Racer takes off