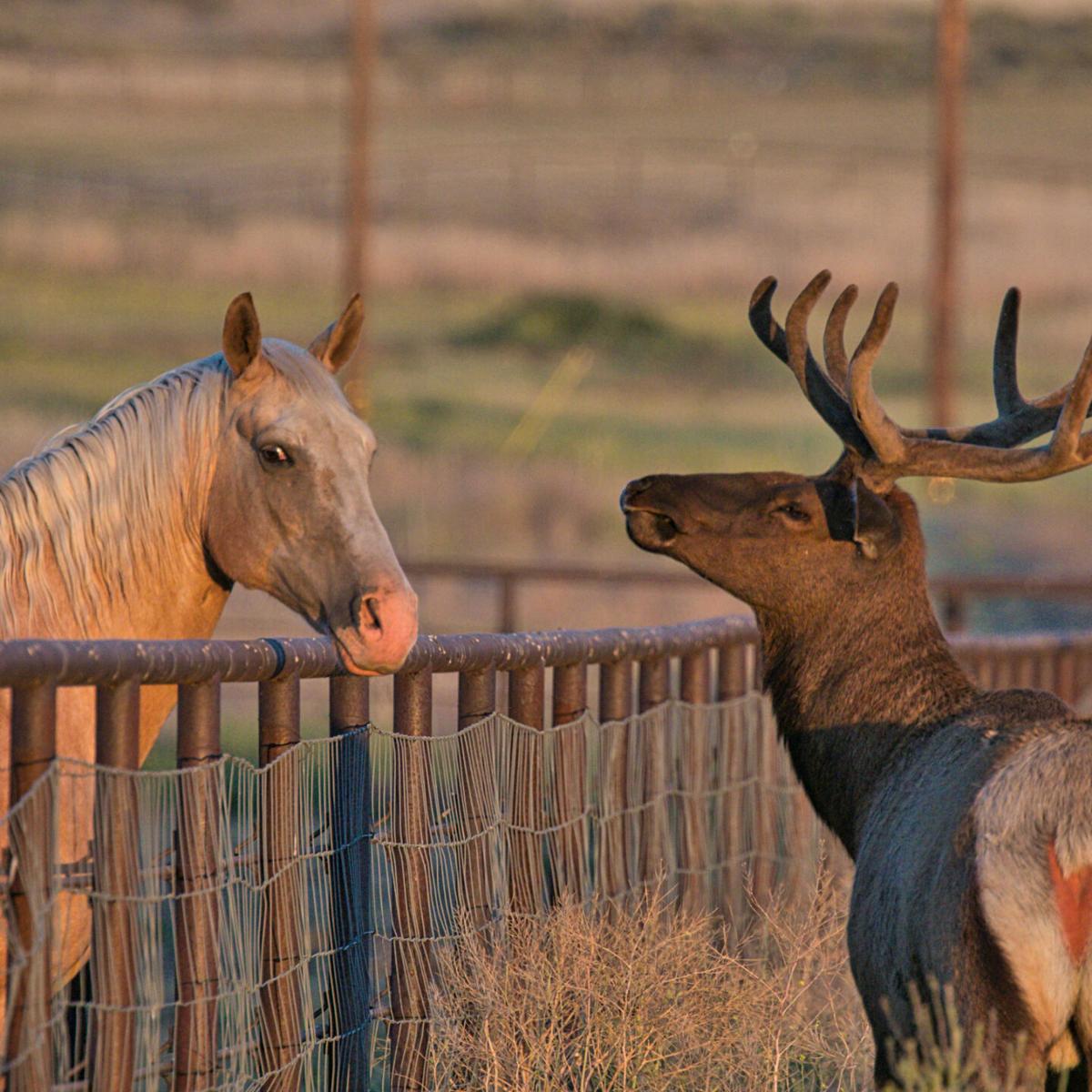 Toshimi Kristof photographed this cordial encounter between a horse and elk in Bear Valley Springs. 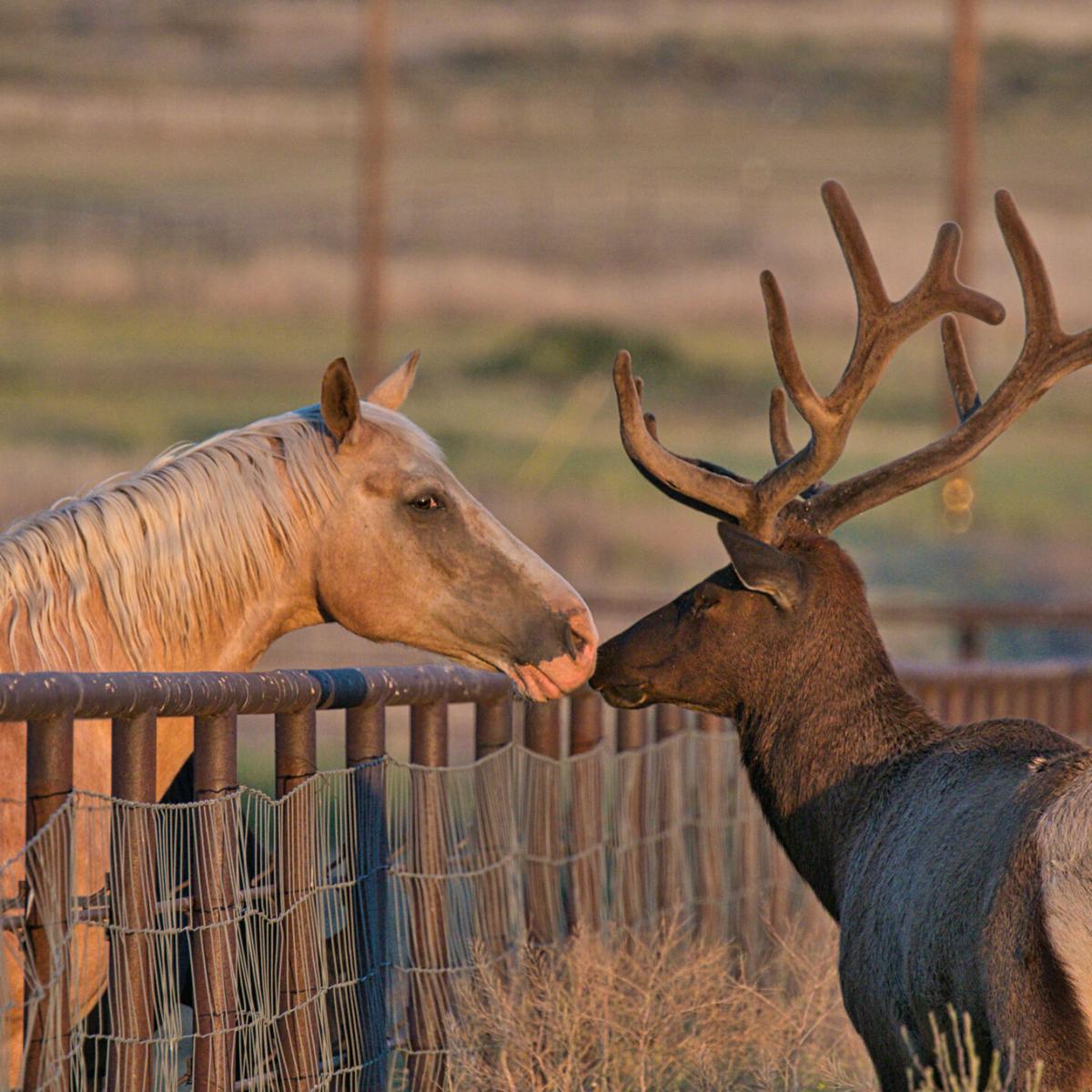 Neither animal was showing signs of fear or aggression. 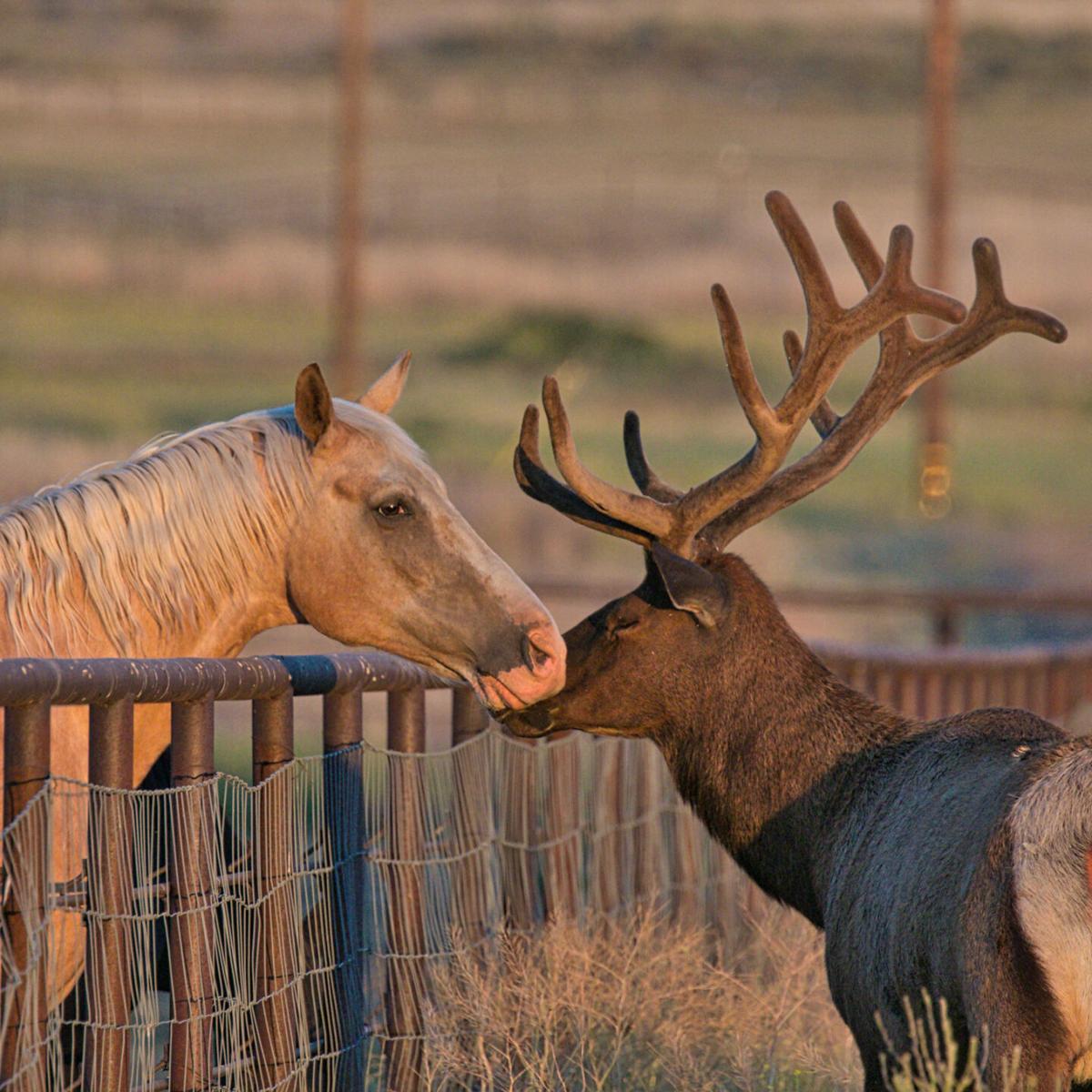 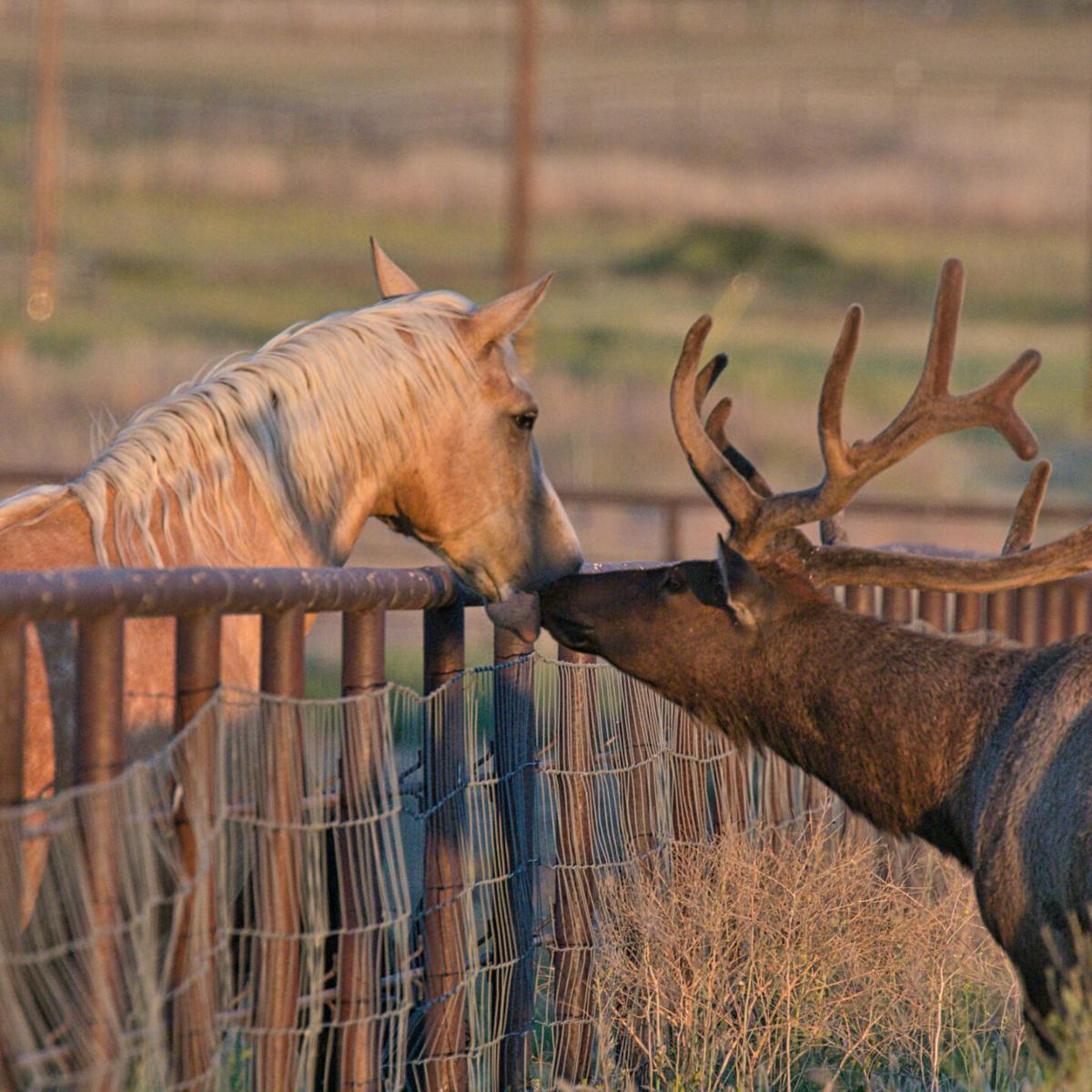 The elk, who can come and go as he chooses, wanted to get to know the horse better. 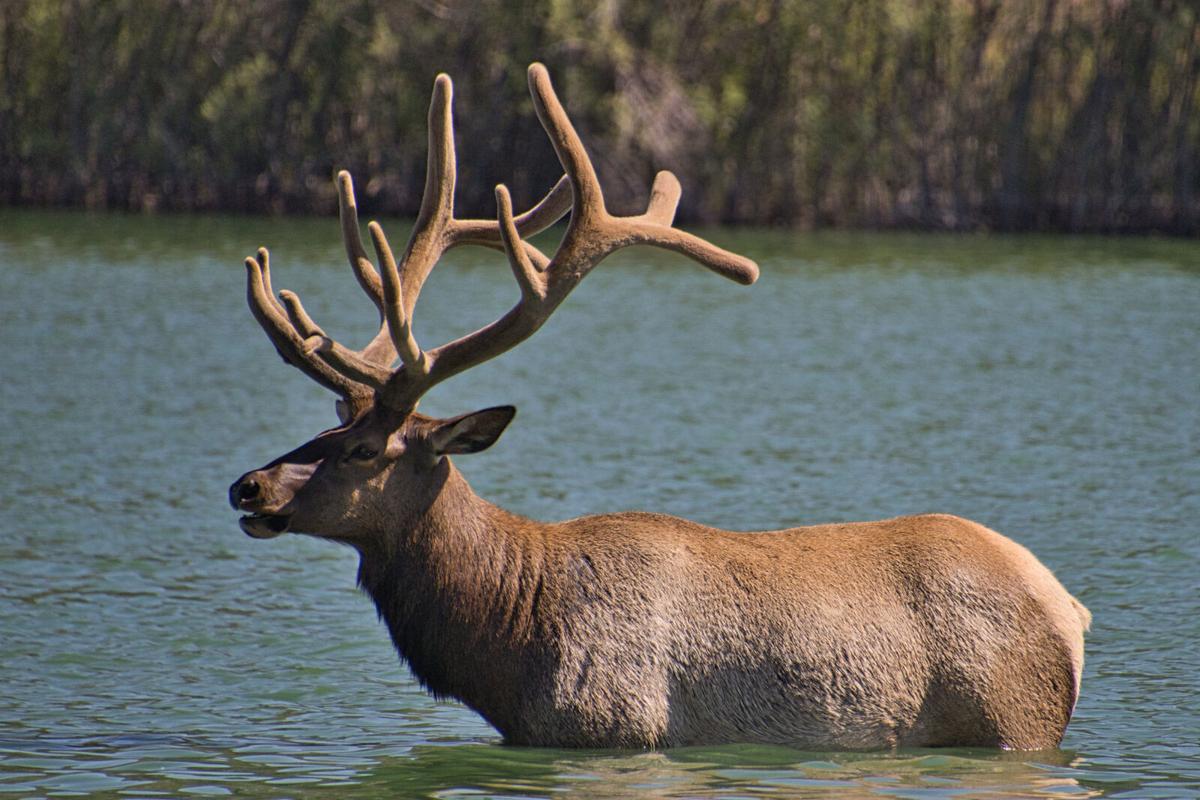 A big bull elk cools off in Cub Lake in Bear Valley Springs. 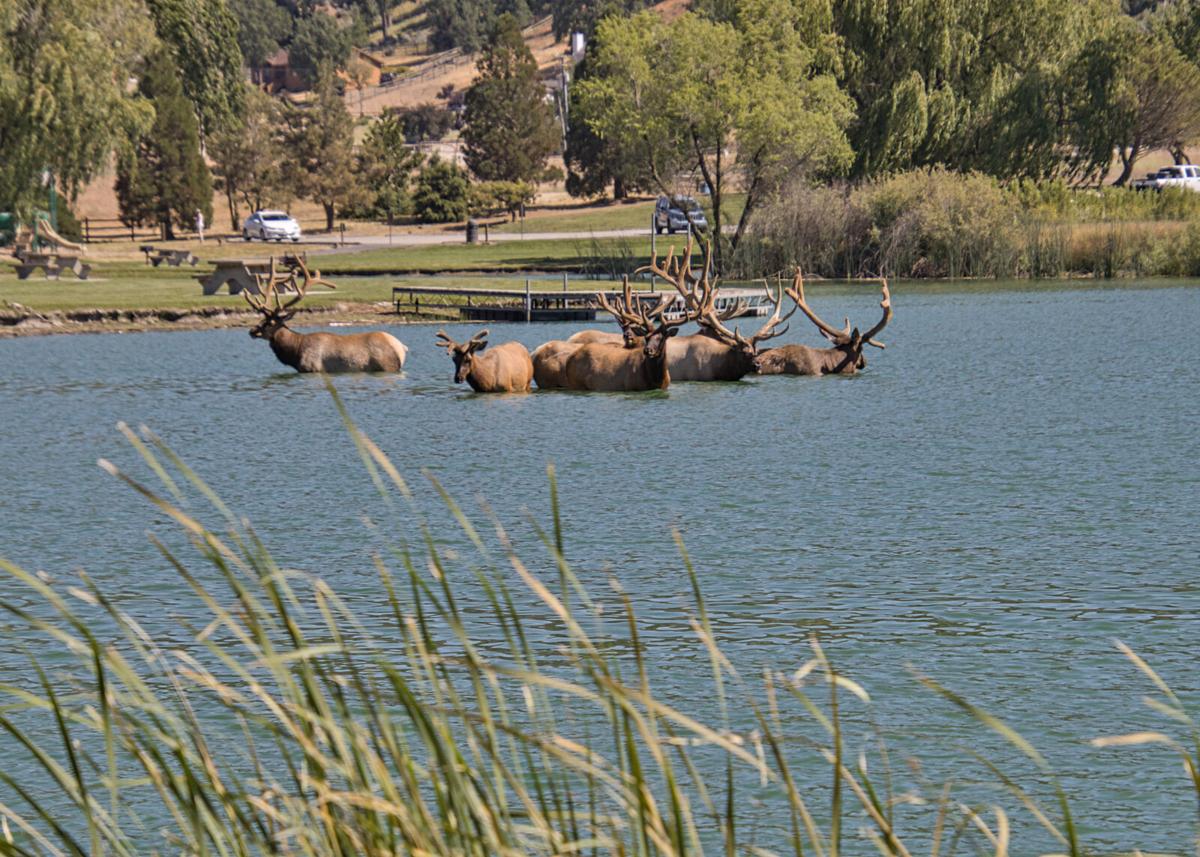 Elk enjoy water and can swim well if need be. The Tehachapi Indian word for them means “water deer.”

Toshimi Kristof photographed this cordial encounter between a horse and elk in Bear Valley Springs.

Neither animal was showing signs of fear or aggression.

The elk, who can come and go as he chooses, wanted to get to know the horse better.

A big bull elk cools off in Cub Lake in Bear Valley Springs.

Elk enjoy water and can swim well if need be. The Tehachapi Indian word for them means “water deer.”

The statuesque and beautiful elk that inhabit the Tehachapi Mountains have become cherished members of our local fauna, and summertime sightings bring joy to anyone who likes nature and wildlife.

The elk in our area are known as American Elk or Rocky Mountain Elk (Cervus canadensis nelsoni) and are part of a group of about 400 that were brought from the Yellowstone National Park area to the Ellsworth Ranch in Stallion Springs around 1966.

Not all of them survived the experience of being captured, transported across five Western states and put into new surroundings, but most of them did, and they were reportedly kept confined in a one square mile (640-acre) grazing area surrounded by a tall fence.

One windy night a giant oak tree lost a massive limb, which crashed down onto the fence and created an opening through which most of the elk escaped. In the ensuing 50 years, their numbers have slowly grown and they have spread into Bear Valley Springs, throughout Stallion Springs, the Tejon Ranch, and even into Golden Hills and the Tehachapi Valley.

While they can and do cause occasional damage, like knocking over bird baths and fountains while getting a drink, or browsing down plants in the yards of area residents, it is rather remarkable how few negative impacts they actually do cause. Collisions with cars are very rare, fortunately, since these enormous deer are capable of totaling a car or truck.

They are often seen entering water in hot weather, which is one of the big differences between them and our native California Mule Deer. The Mule Deer may occasionally stand in a little creek while drinking water, but the American Elk — especially the big bulls — will wade right into a pond or lake and spend up to an hour standing chest deep to cool off in hot weather. They are also good swimmers if they encounter deep water.

The Nuwa (Kawaiisu or Paiute) word for deer is tuhui, and the word for elk is parahui, which essentially means “water deer.” It is a good word for these water-loving ungulates.

Elk are often described as “big as a horse,” and when a big bull entered the orchard of my friends Lonnie and Cindy Latham near Highline Road, Lonnie initially thought someone’s horse had escaped. When he walked down for a closer look, he saw that the stray horse had antlers, and was actually a bull elk, which he left alone to leave on its own.

When my photographer friend Toshimi Kristof and her husband Les were walking in Bear Valley Springs last month, they encountered a bull elk interacting with a horse. Toshimi took the photos that accompany this article, with the horse and elk clearly showing polite interest in each other.

Toshimi and Les walk almost daily when the weather isn’t too hot or too cold, and as a result Toshimi captures many interesting nature photos. She also took the images of bull elk cooling off in Cub Lake on a warm day.

American Elk are large and in charge, and they are often seen this time of year as they graze, rest in the shade or cool off in water. Enjoy the sight of these massive animals in their Tehachapi Mountains home.