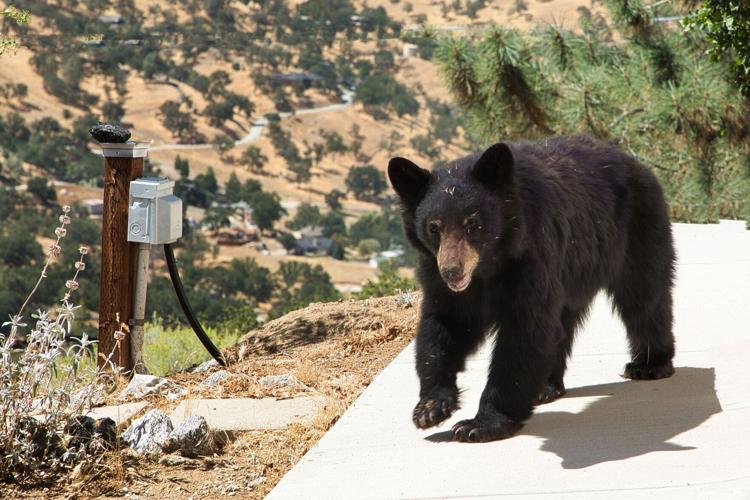 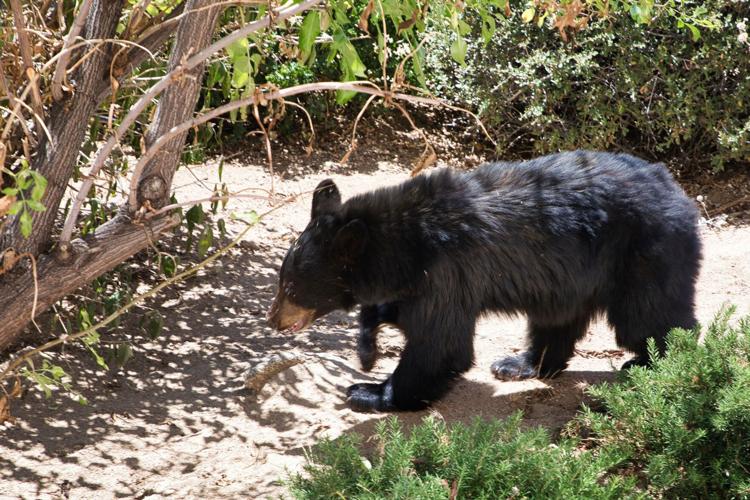 The bear ambled around for about 30 minutes. 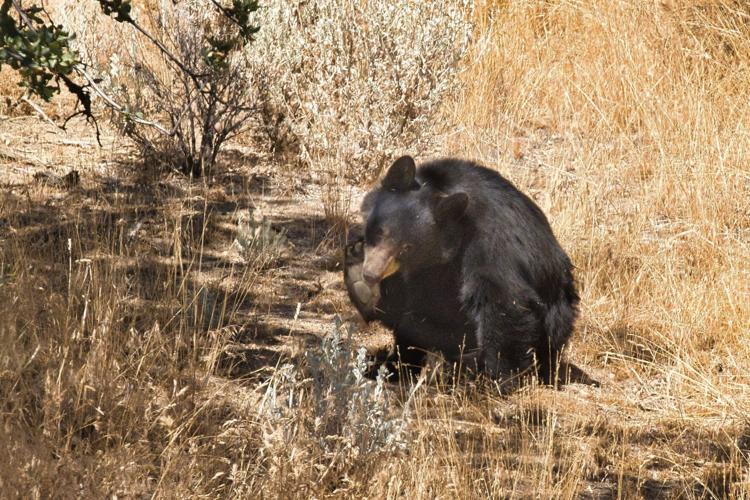 The bear licks its paw. Ripgut Brome, a non-native annual grass with long barbed awns, causes problems for lots of wildlife as well as humans. 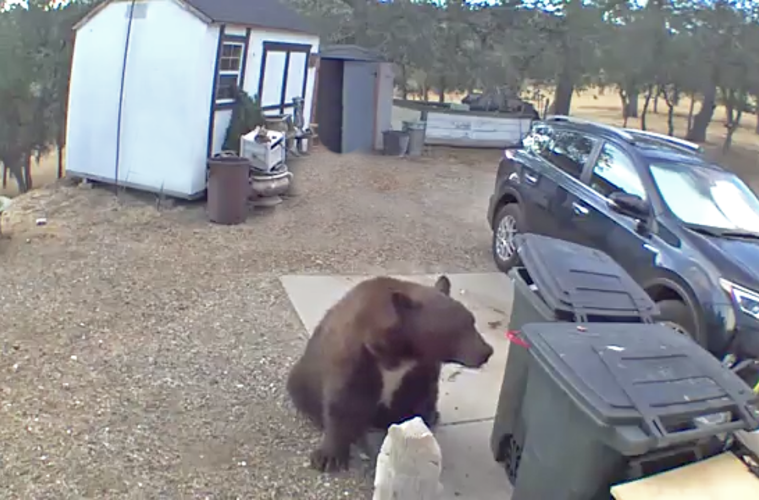 This large brownish bear was captured on a trail camera investigating trash cans at Chris and Kerri Esten’s home.

The bear ambled around for about 30 minutes.

The bear licks its paw. Ripgut Brome, a non-native annual grass with long barbed awns, causes problems for lots of wildlife as well as humans.

This large brownish bear was captured on a trail camera investigating trash cans at Chris and Kerri Esten’s home.

One of the apex predators in the Tehachapi Mountains has been appearing more frequently this summer, as residents in outlying areas report increased sightings of Ursus americanus californiensis, better known as the California Black Bear.

The most obvious explanation for the increase in Black Bear sightings is, naturally, California’s ongoing drought. The lack of rain and winter snow leads to reduced plant growth, which diminishes potential food sources.

This can affect creatures throughout the ecosystem, from the smallest to the largest. How does this work?

Well, as energy moves through a food chain, it starts with producers, which are usually plants. These are then eaten by primary consumers, which may themselves be preyed upon by secondary consumers.

So it rains in winter and spring, then grass sprouts and grows, using photosynthesis to capture energy from the sun. A mouse then eats the grass, transferring energy to the rodent. The mouse may then be eaten by a snake, which is later caught and eaten by a hawk. So the energy keeps moving through the food chain.

Although Black Bears are well-known omnivores, able to utilize a variety of food resources, they are primarily herbivores, so reduced plant growth due to drought does adversely affect them.

Bears also eat lots of insects, especially colony insects like bees, yellowjackets, ants, etc. Bears are particularly after the larvae of these insects, which are like little buttery, protein-packed treats for hungry bears.

It is common knowledge that bears like honey, thanks in part to the Winnie-the-Pooh children's stories by British author A. A. Milne. These were inspired by a female bear named Winnipeg, or Winnie, which was purchased as an orphaned cub by a Canadian soldier traveling through Ontario to report for duty at the start of World War I in 1914. The soldier, Lt. Harry Colebourn, took the cub with him when he was shipped to England, and left her at the London Zoo when he was sent to France. The bear spent the rest of her life there until she died at the old age of 20 in 1934. She was known for being especially friendly and socialized to humans.

While it is true that bears like honey, they like larval bees even more, and the larvae are more nutritious. When bears have ransacked commercial bee hives, beekeepers often notice that the bears focus more on the brood frames that contain mostly bee larvae, rather than the frames that contain mainly honey.

Black Bears are equipped with better eyesight, particularly at night, and better hearing than people. But their sensory superpower is their sense of smell, which is reportedly seven times more acute than that of a typical dog.

This enables a snuffling bear to sniff out yellowjacket nests hidden in an old ground squirrel hole, as well as be able to smell the traces of a candy bar left in a locked car. Which may then prompt the bear to force its way into the car, with expensive damage resulting.

Around Tehachapi this summer, hungry bears have raided trash cans, freezers in open garages, etc. One young bear even entered an open window during daylight and came inside the home of a friend of mine who lives on Bear Mountain. My friend is an indomitable lady and she calmly scared the bear back outside.

I’m including some photos taken by my friend Toshimi Kristof on Aug. 15, when a young bear stopped by Les and Toshimi’s home in BVS. Toshimi spotted the bear outside and quickly closed the garage door — a month earlier, a bear had entered their open garage and rummaged through the trash bin. The most recent bear stayed around the property for about 30 minutes before it moved on.

Chris and Kerri Esten have also had repeated visits from two different bears at their property in the mountains south of town. One is likely the mother, a large brownish bear with a white blaze on her chest, and the other is a black youngster.

I was visiting the Estens a couple of weeks ago, and the night before the mother had returned, found the garage closed and inaccessible, so she attempted to force her way in by removing a 1x6 trim board from around a door into the garage. Although the board was eight feet long and had been well nailed the length of it, she pulled it completely off like it was a banana peel.

Bears will also feed on carrion, and can use their amazing sense of smell to locate the carcass of a deer killed by a Mountain Lion. After a successful hunt, the big cat needs to immediately eat as much meat as possible, because they may not get another chance in the following days because of bears, coyotes, ravens and other carrion eaters.

The good news for bears and other animals is that there seems to be a pretty good crop of acorns on at least two of our local oak species, Valley Oaks and Blue Oaks, and these will be dropping soon. Acorns are the most important autumn food source for a number of species, including Black Bears, California Mule Deer, Acorn Woodpeckers, California Gray Squirrels, etc.

Black Bears are formidable creatures and you should never crowd them or try to get too close. With proper caution, however, humans and bears can certainly share the Tehachapi Mountains.