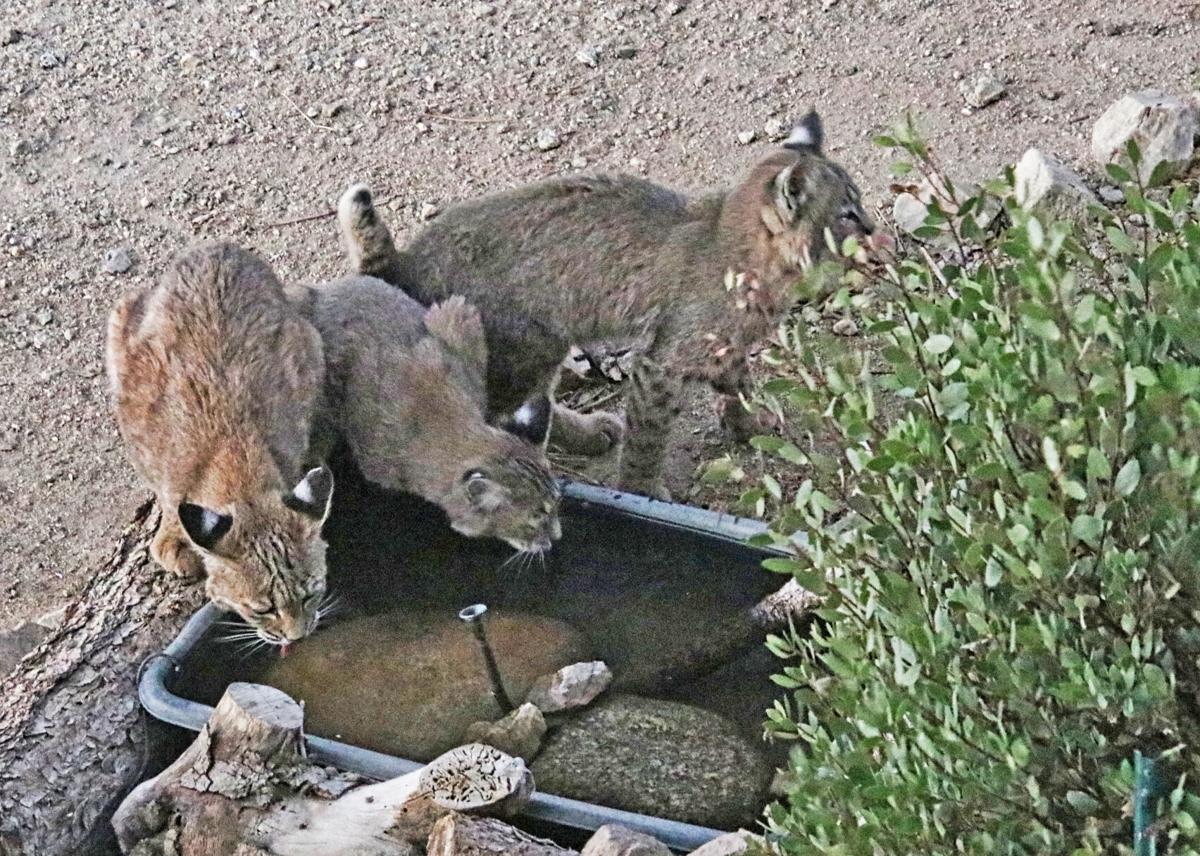 A mother Bobcat and two kittens in Bear Valley Springs drink from a water source provided by Les and Toshimi Kristof. 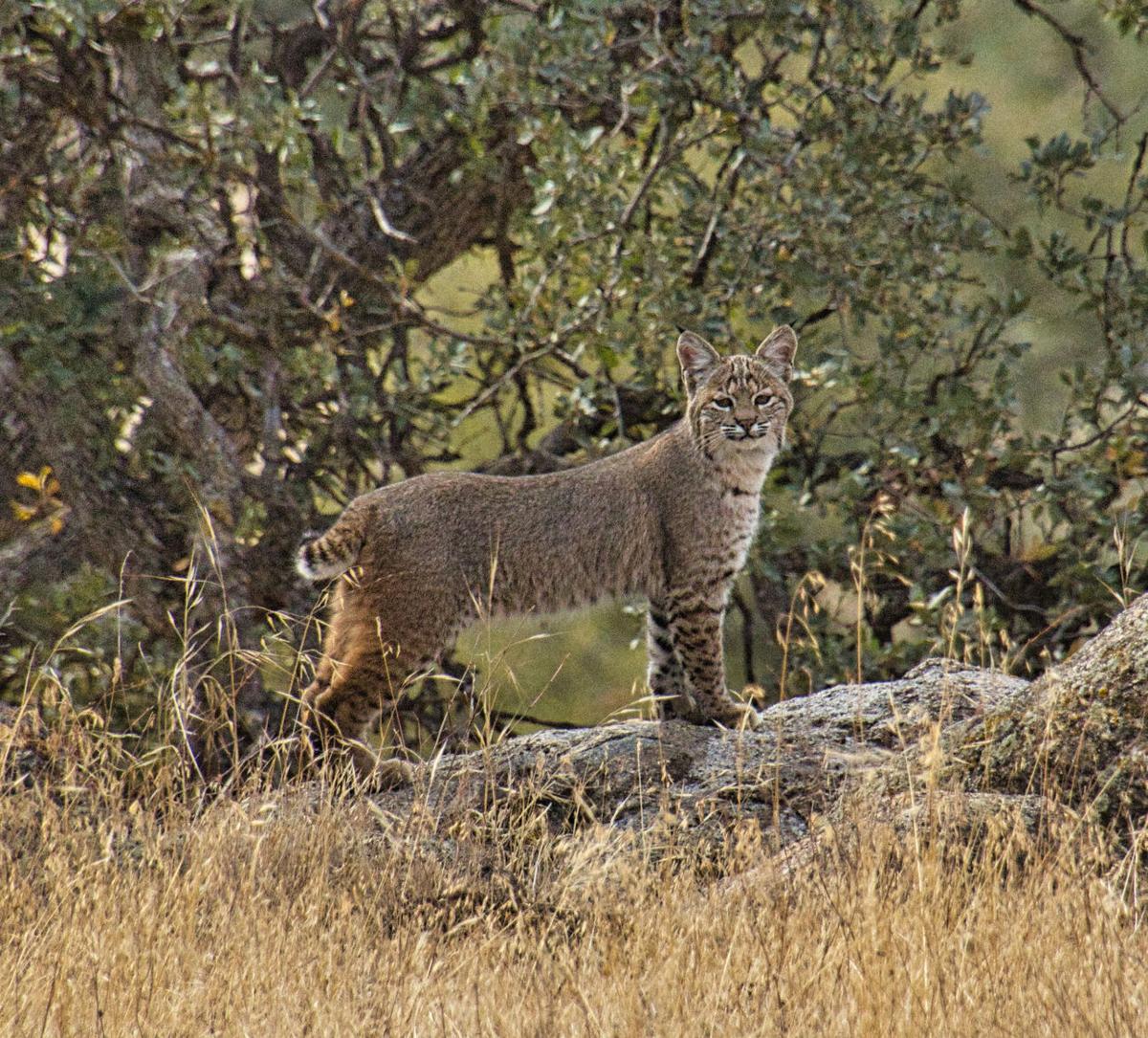 A young Bobcat, looking adult but not yet fully grown, surveys its surroundings. 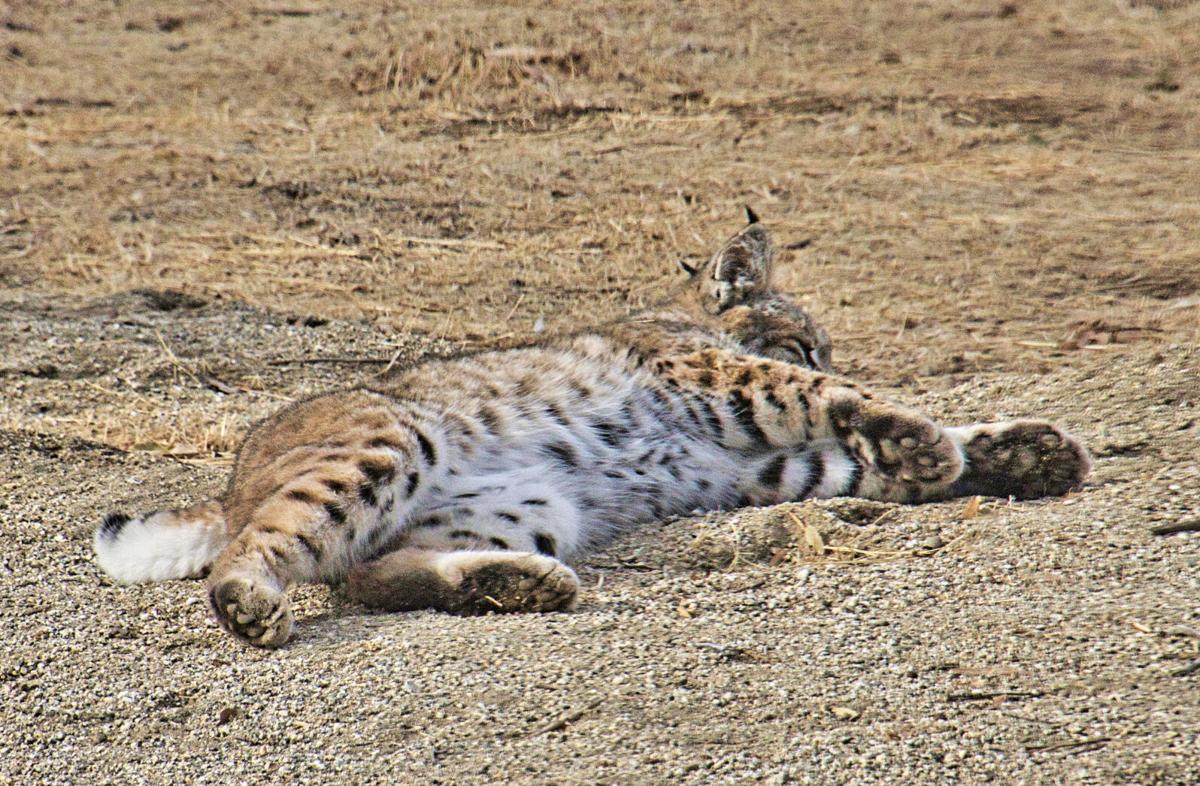 Sometimes just a roll on the ground seems like a good idea. 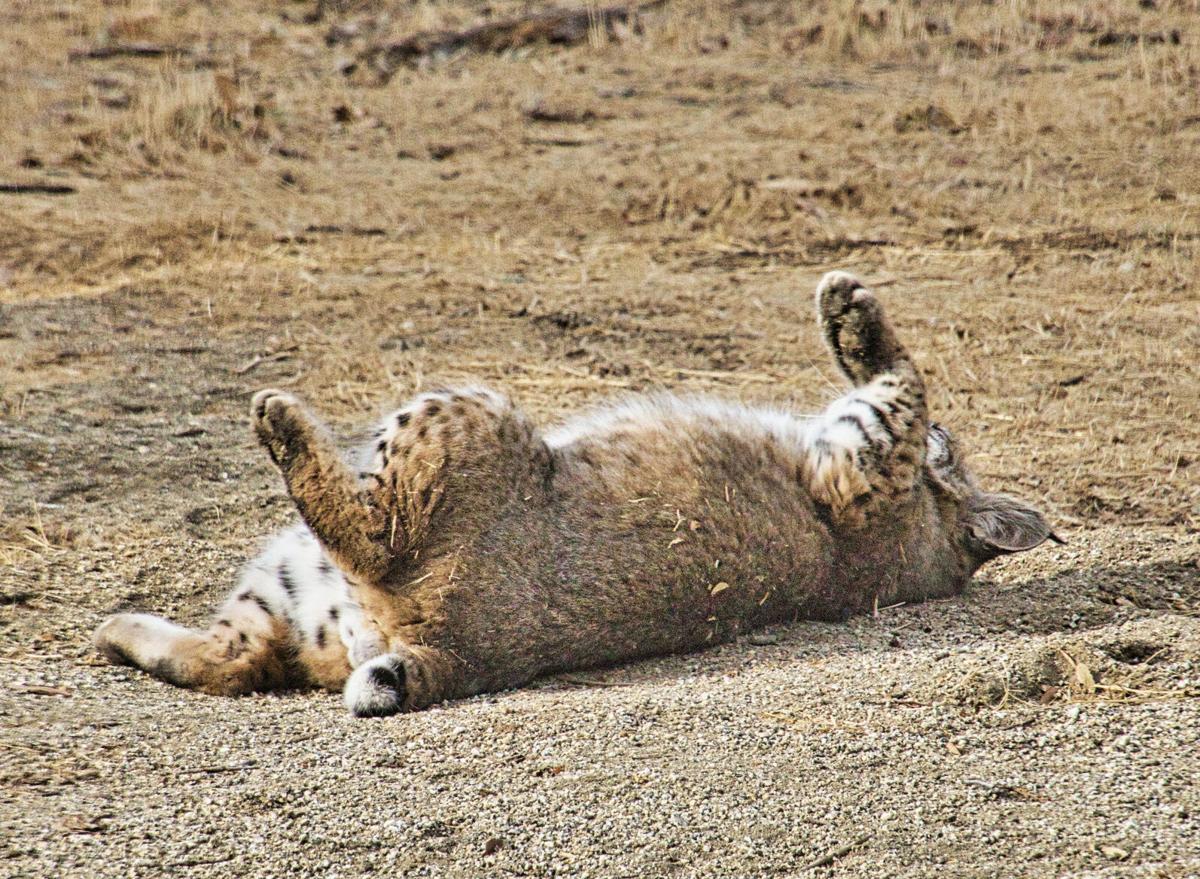 A Bobcat kitten scratches its back. 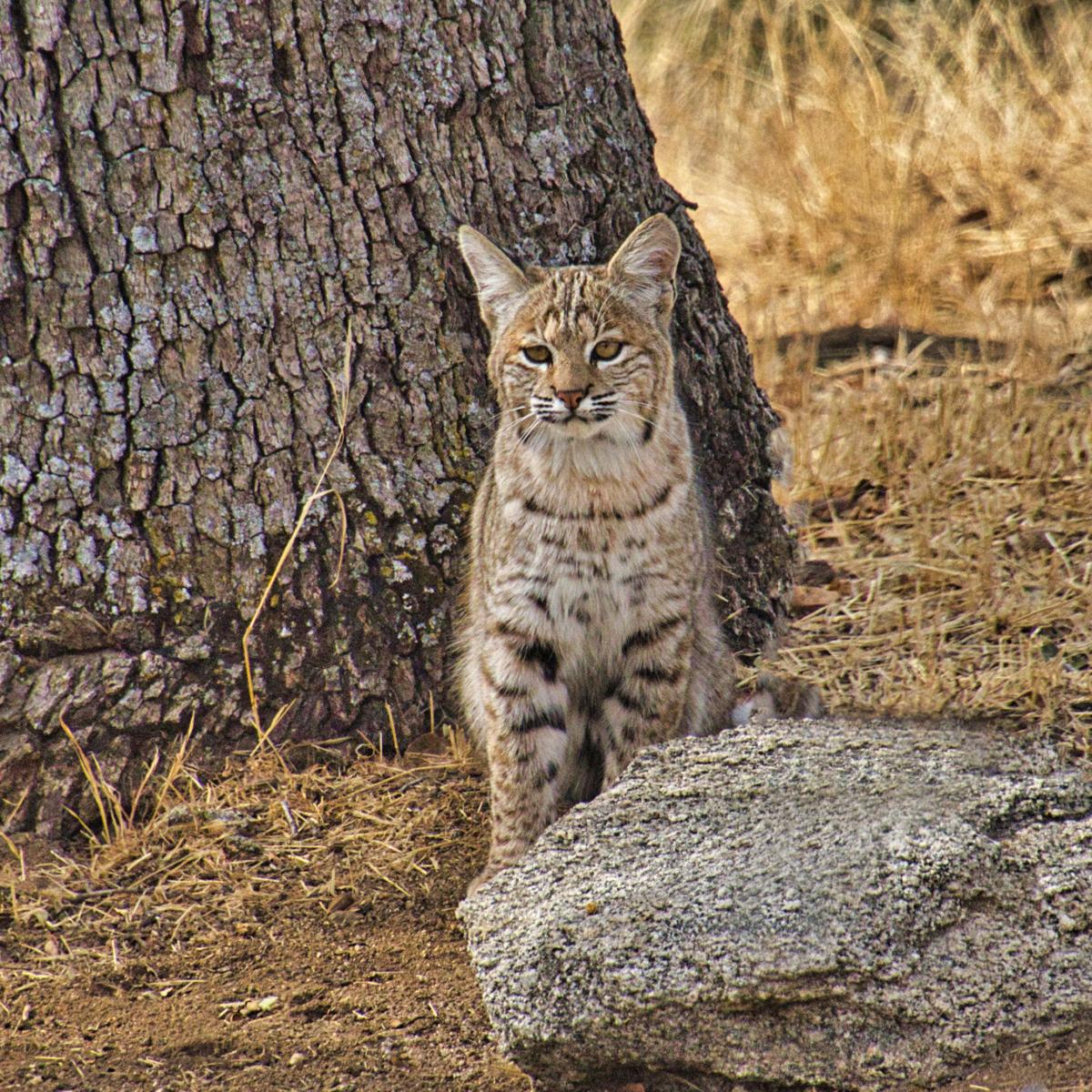 A young Bobcat with a somewhat wistful expression pauses by an oak tree. 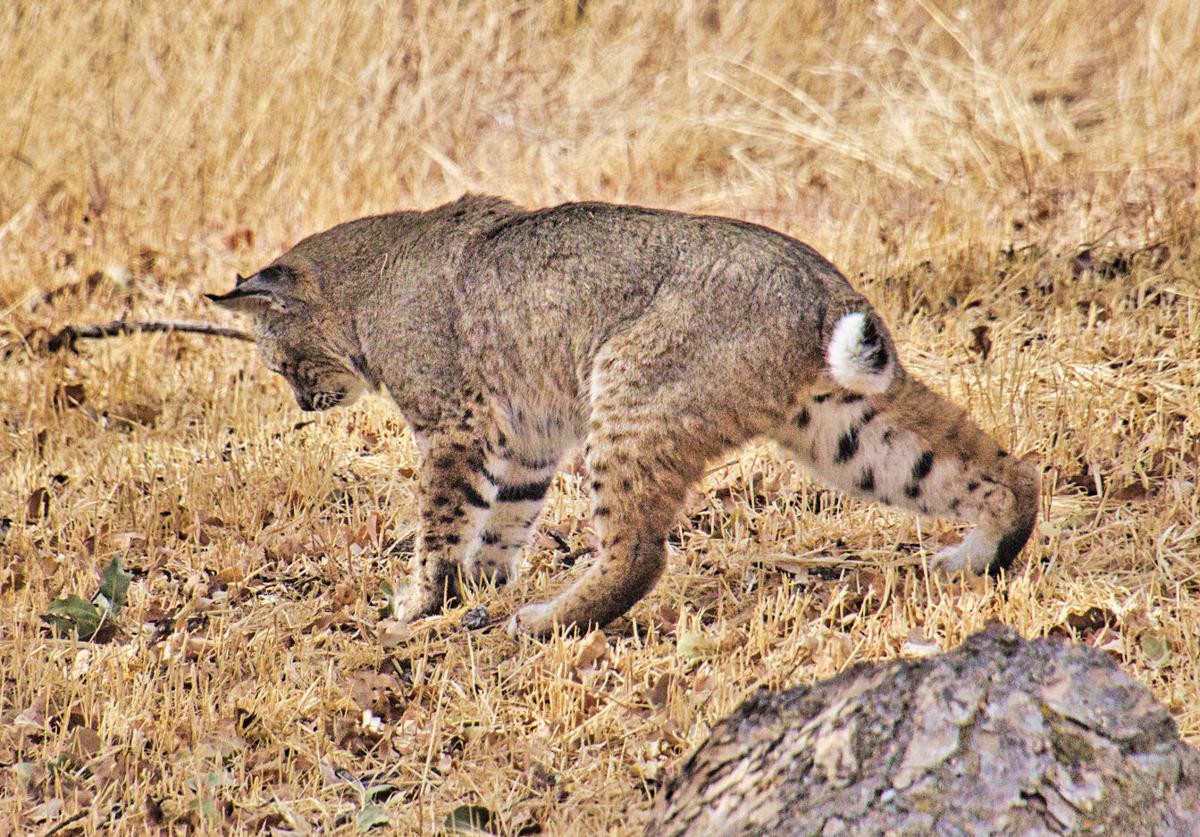 Practicing its hunting technique, a young Bobcat has just pounced — on leaves.

A mother Bobcat and two kittens in Bear Valley Springs drink from a water source provided by Les and Toshimi Kristof.

A young Bobcat, looking adult but not yet fully grown, surveys its surroundings.

Sometimes just a roll on the ground seems like a good idea.

A Bobcat kitten scratches its back.

A young Bobcat with a somewhat wistful expression pauses by an oak tree.

Practicing its hunting technique, a young Bobcat has just pounced — on leaves.

As the year 2020 draws to a close (yay!), the young animals born this year can be seen going through their days as smaller versions of their parents. The juveniles of both predators and prey are nearing independence, though they are mostly still near their mothers.

I've been watching California Mule Deer fawns, typically born in June, that have lost their spots and are now two-thirds the size of the does. When you see a small herd of six or eight deer, the young ones may be slightly apart, exploring their surroundings, but at any sign of danger, they quickly run/bounce back to the adults to follow the older deers' lead on whether to flee and where to go.

The offspring of predators like California Gray Foxes, Bobcats, Coyotes, Mountain Lions and American Black Bears are also close to young adulthood, but still mostly relying on their parents — like high school kids who desire both freedom and security.

Predators tend to give birth to very small, helpless young so that their mothers are not having to carry around large fetal offspring, and are still able to hunt right up until giving birth.

This is particularly true for cats, where the mothers must raise their babies without any assistance from the father — no one brings her food but herself. A female cat continues to hunt, even with birth impending.

The process of a cat having kittens is called queening, which is the feline equivalent of a dog whelping puppies. Bobcats give birth after a relatively short gestation period lasting only about two months. A mother Bobcat will find a sheltered place for queening, usually in a boulder outcropping or a large hollow log, where she typically gives birth to a litter of two to four kittens.

The Bobcat kittens open their eyes after about 10 days. Their mother nurses them for about two months, and then she must hunt both for herself and to feed her kittens solid food. If you see an adult Bobcat walking away while carrying a gopher or ground squirrel in its mouth, it is often a mother bringing prey back to feed her growing kittens.

By the time they are four or five months old, the young Bobcats are following their mother, learning to hunt and how to avoid danger. As the weeks go by, even when separated from their mother for periods during the day, the kittens reunite with her and still rely on her hunting skills to help keep them fed.

Toshimi and Les Kristof of Bear Valley Springs often have Bobcats visit their home, frequently to drink from water sources that they provide. Toshimi sent me photos she took recently of two young Bobcats that were visiting, and they are included with this week's column.

"There were two bobcat kittens," Toshimi told me. "I didn't see their mother nearby.

First of all they were drinking water, side by side and one started rolling over the dirt and then went into hunting mode. He couldn't catch anything through. The other one was just running around and sitting. They spent about five minutes or so in our yard. They were very cute. I see an adult bobcat quite often in my yard, so I think it is a mother of these two but of course I am not sure."

I'd like to wish all of our readers a Happy Thanksgiving, and encourage everyone to connect with the people they love this week — even if they are far away and you have to interact by telephone or FaceTime or whatever. Having our loved ones, both friends and family, in our lives is a reason to be genuinely thankful.