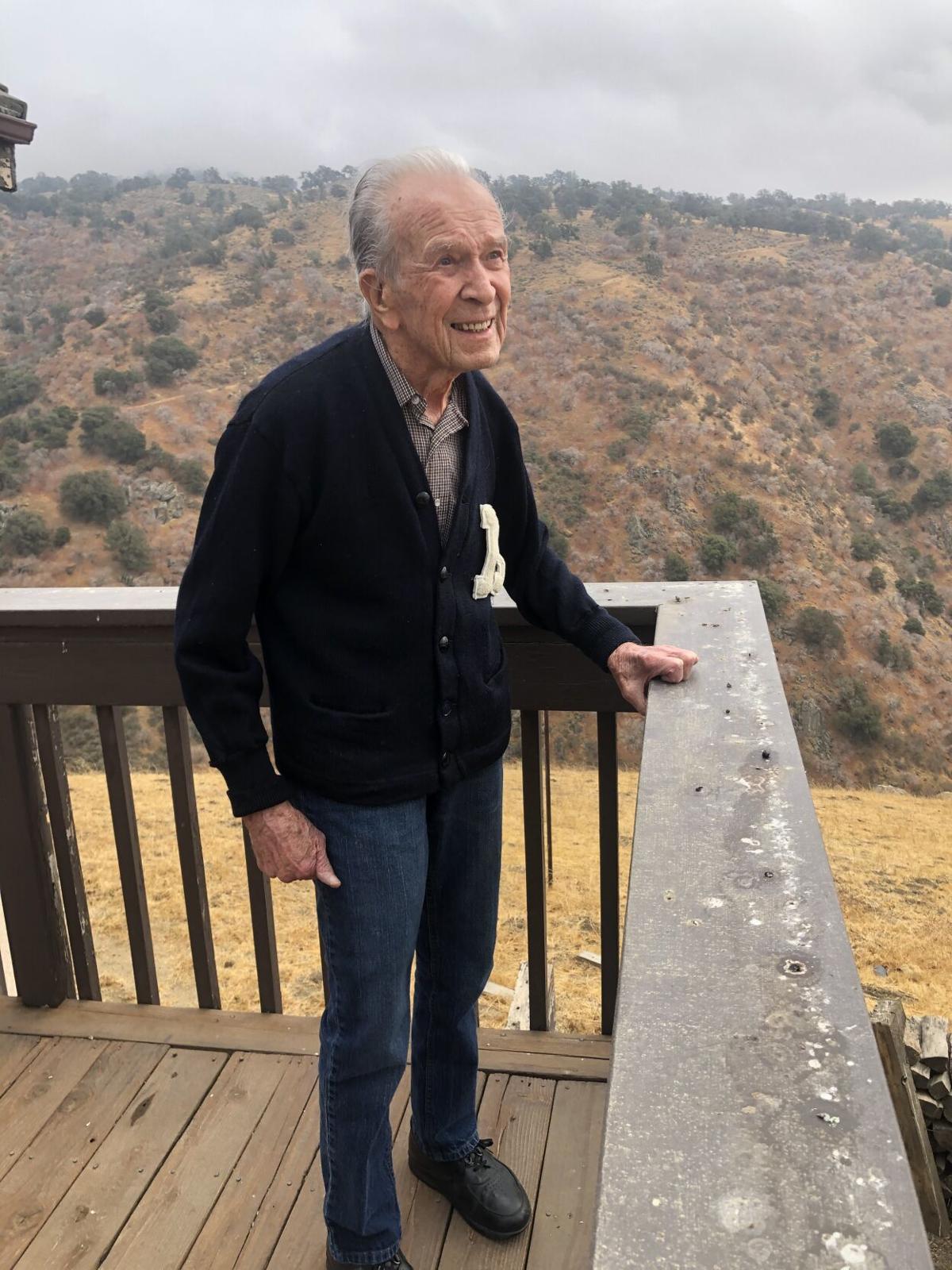 Chuck McCollough, 93, on the deck of his Stallion Springs home. He is wearing a letterman's sweater he earned when he was on the swim team at the Colorado School of Mines — 70 years ago. 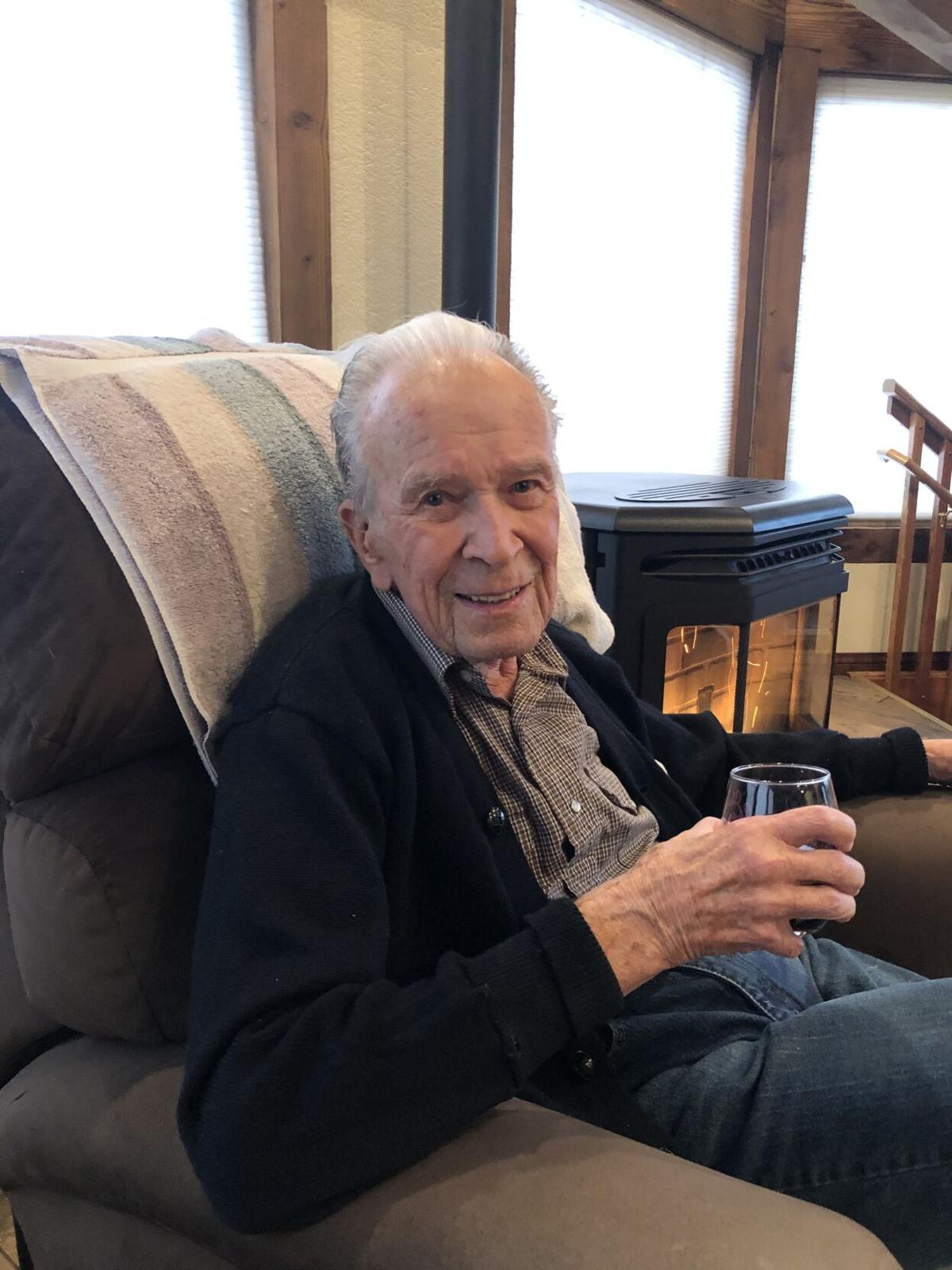 2) Chuck relaxes at home. He started Triassic Legacy Vineyard when he was 80 years old. 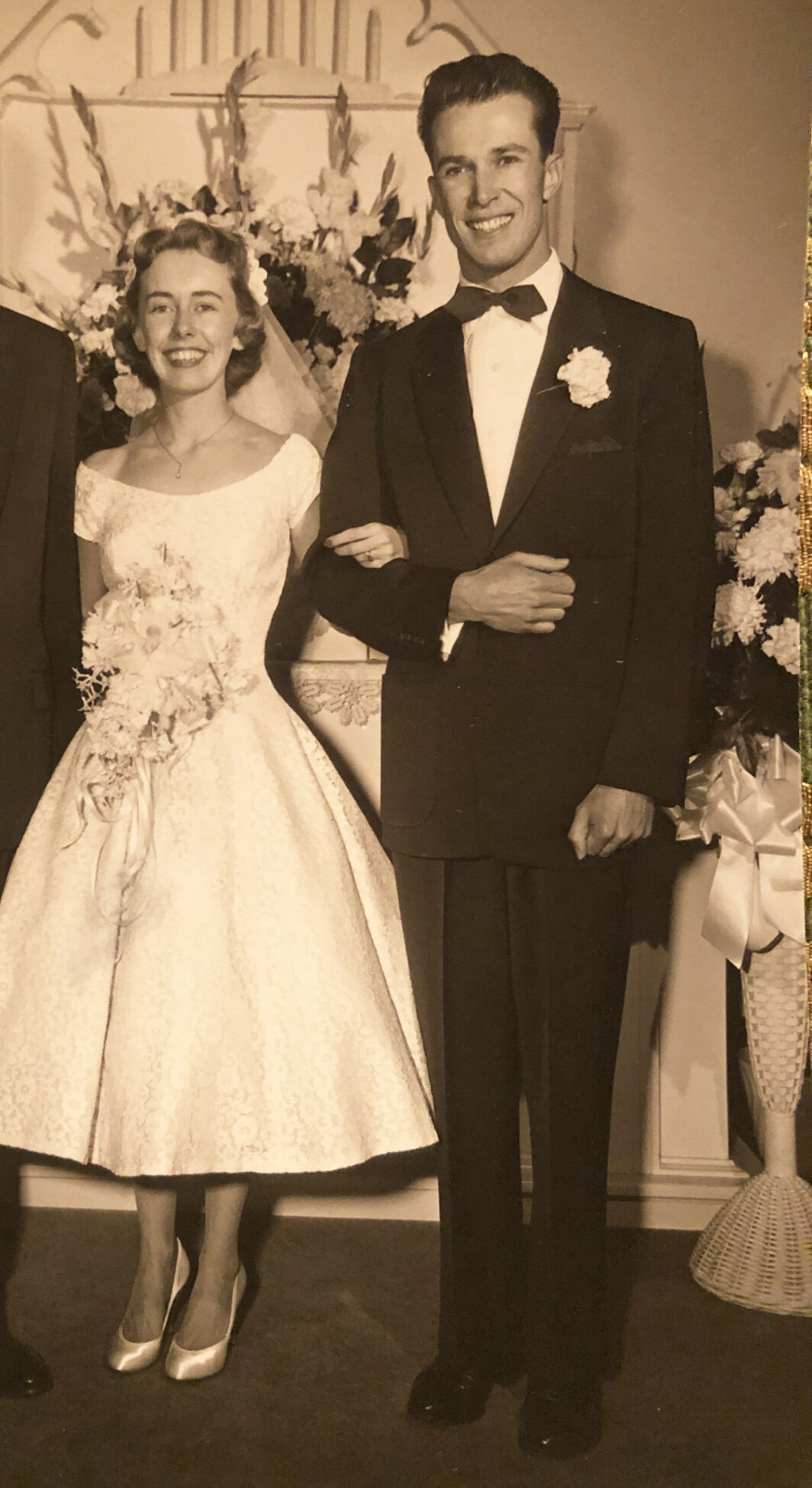 Chuck and his late wife Lorraine, who was also an enthusiastic Tehachapi resident.

Chuck McCollough, 93, on the deck of his Stallion Springs home. He is wearing a letterman's sweater he earned when he was on the swim team at the Colorado School of Mines — 70 years ago.

2) Chuck relaxes at home. He started Triassic Legacy Vineyard when he was 80 years old.

Chuck and his late wife Lorraine, who was also an enthusiastic Tehachapi resident.

Chuck McCollough is a great example of a life well-lived. Now 93 but still bright and active, Chuck can look back on a vigorous and accomplished lifetime.

From his Stallion Springs home perched above Chanac Canyon, with a sweeping view to the west of the San Joaquin Valley far below, Chuck can savor his achievements and the many joys of his long life.

Like many Tehachapi residents, Chuck was nearing retirement age when he first moved here in 1986. He and his beloved wife, Lorraine, bought property in Stallion Springs in 1985, and envisioned having a little weekend place to escape to while Chuck was finishing his career as a petroleum geologist.

However, their planned A-frame instead turned into a beautiful home, and they moved here fulltime. Chuck and Lorraine had been referring to their planned house as "the cabin," but skilled contractor Jim Hartnett told them, "No, you've got this great piece of property, you need something better than that." So Jim designed and built a lovely home for them, and Chuck then began a life of community activism, starting the Cummings Valley Protective Association and working tirelessly to help keep agriculture viable in the area.

"I worked at a high-stress job for Occidental Petroleum in the Bakersfield area, and I'd come home to Stallion Springs, and as I drove down that big sweeping curve of Highway 202 as it drops into Cummings Valley, and see all the farming, I'd say aahhh...," Chuck remembers.

It wasn't long before he realized that there were multiple threats to Cummings Valley's long agricultural tradition, so he started the CVPA with some other like-minded residents to help maintain farming here.

"In the earlier days, we could drive from town to Stallion Springs and sometimes only pass one car," Chuck told me. "We weren't against all growth or new housing, but we didn't want to see farming get pushed aside either."

Over the years, the CVPA successfully fought against many proposals that would have hurt farming, including plans for hundreds of homes, commercial-scale wind or solar energy installations, re-zoning, etc.

Today Cummings Valley is a thriving and highly productive source of many organic vegetables, and from high vantage points you can look down on a patchwork quilt of different shades of green and brown blocks of farmland. Hundreds of people are employed in the agricultural powerhouse of Cummings Valley.

Chuck has also contributed to farming in Cummings Valley in a very personal way: he started a vineyard there. After years of unsuccessfully trying to get someone interested in establishing a farm or vineyard on a piece of property just as you enter the valley on Highway 202, Chuck decided — at age 80 — he'd have to do it himself. He had lost Lorraine to cancer in 2000, but he was still going strong.

There had been suggestions to build a gas station and convenience store at that location, but Chuck believed that the property could serve a higher purpose. So he bought the land in 2007, and with help from friends and community volunteers, in one day in 2008 a total of 6,310 grapevines were planted there.

That property became Triassic Legacy Vineyard, named after the rounded hills to the north of the farmland that date back to the Triassic period. A tasting room was completed in 2009, and a grand opening was held on December 18, 2011.

The property was sold to Jim and Sally Arnold in 2013, and they have done well: Triassic Legacy is thriving and productive, with healthy vines, a beautiful tasting room and inviting surroundings. Rather than a gas station, minimarket and asphalt parking lot.

Chuck's experience with farming dates back to his childhood. He was born on Nov. 1, 1927, in Loma Linda, Calif. His parents, Charles and Gladys McCollough, lived on an apple ranch in Yucaipa at the time. After the Depression hit, the family suffered setbacks and moved to what Chuck calls their "survival ranch" up in the hills.

The living accommodations were very primitive, with no indoor plumbing. The family used an outhouse and an outside shower until after Chuck left home to join the Navy in 1946. After the military, Chuck graduated from the Colorado School of Mines in 1952 as a geological engineer and spent his long career as a petroleum geologist.

I've been friends with Chuck for many years, having first met him when I forged some iron hinges for his front door. We've worked together on multiple projects over the decades, including many years of historic bus tours of Cummings Valley and Brite Valley. He has always been an intelligent, informed, cheerful and gentlemanly person and I treasure our friendship.

At his advanced age, Chuck has been careful during the COVID pandemic and has limited his outside contact, but he remains healthy and spry, if largely out of sight. To honor him, a surprise birthday parade is being organized for Sunday, November 1 on his 93rd birthday. Well-wishers will gather at 1 p.m. on Tejon Drive in Stallion Springs, and drive to Chuck's house on Tejon Drive where he can sit outside and greet people safely.

Remember though, we're hoping to keep it a surprise for this kind and humble man who has contributed so much to the quality of life in the Tehachapi Mountains.