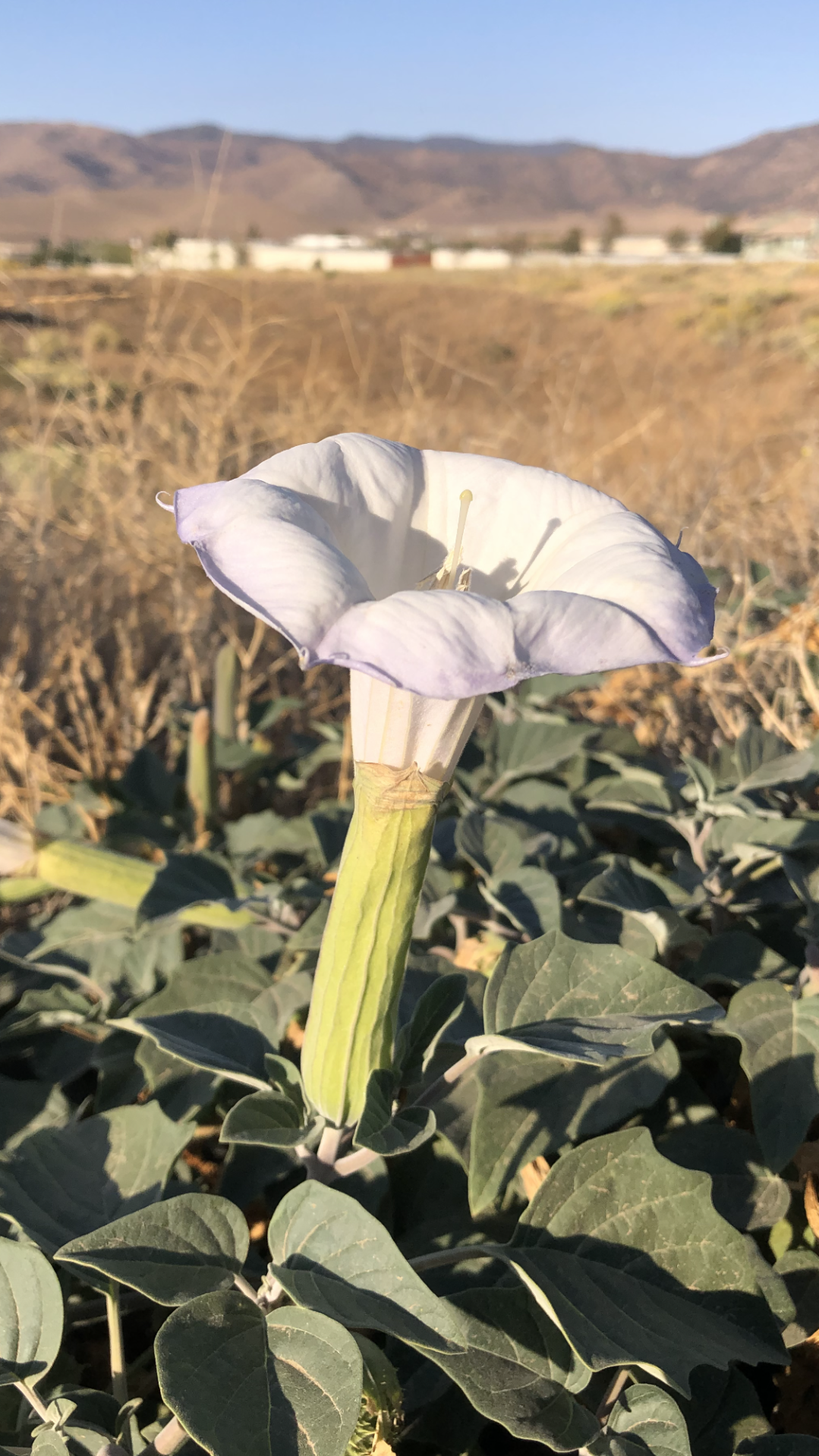 A freshly-opened Datura blossom, tinged around the edges with faint purple, against a blue Tehachapi sky. 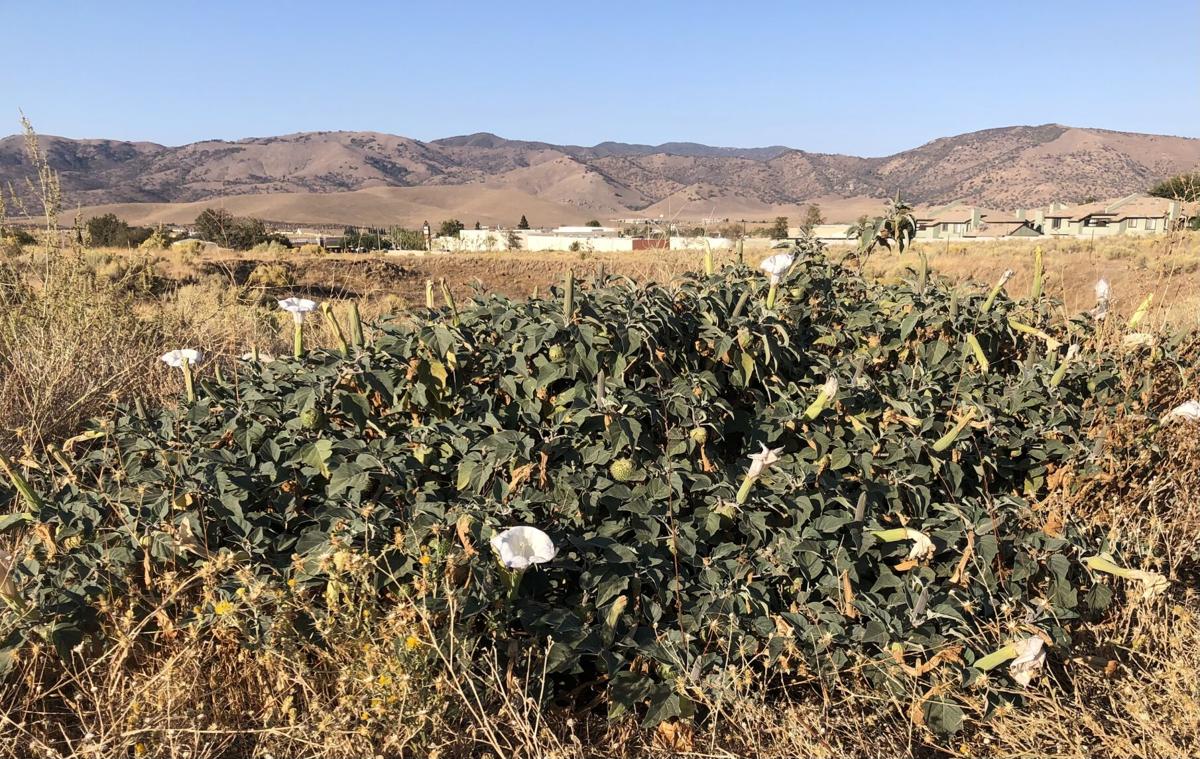 Datura plants like this one can occasionally sprawl as big as five or six feet across. 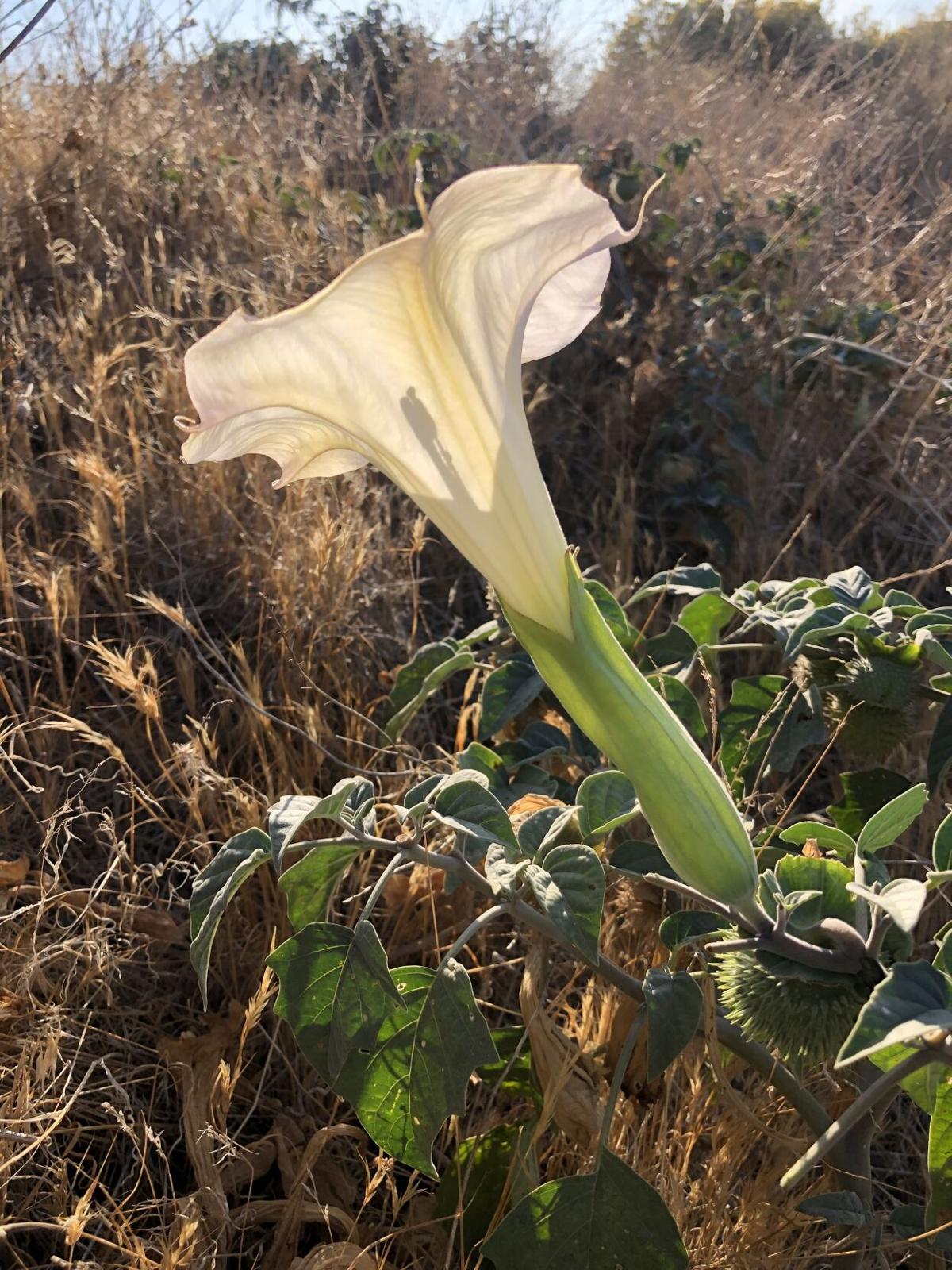 The late afternoon sun shines through a Datura blossom. 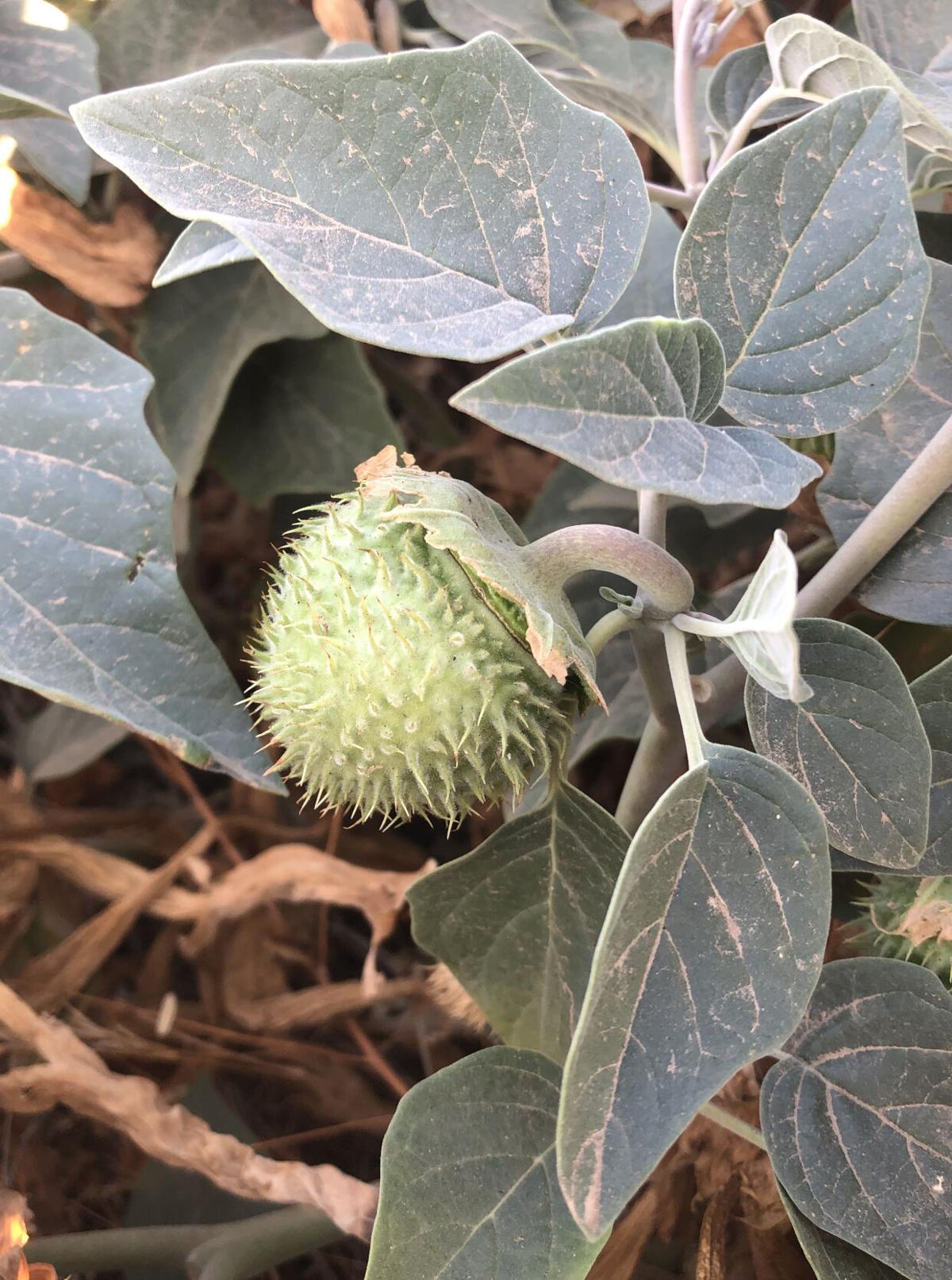 A Datura seed pod amid the bluish-green foliage. This is the source of the common name thornapple. 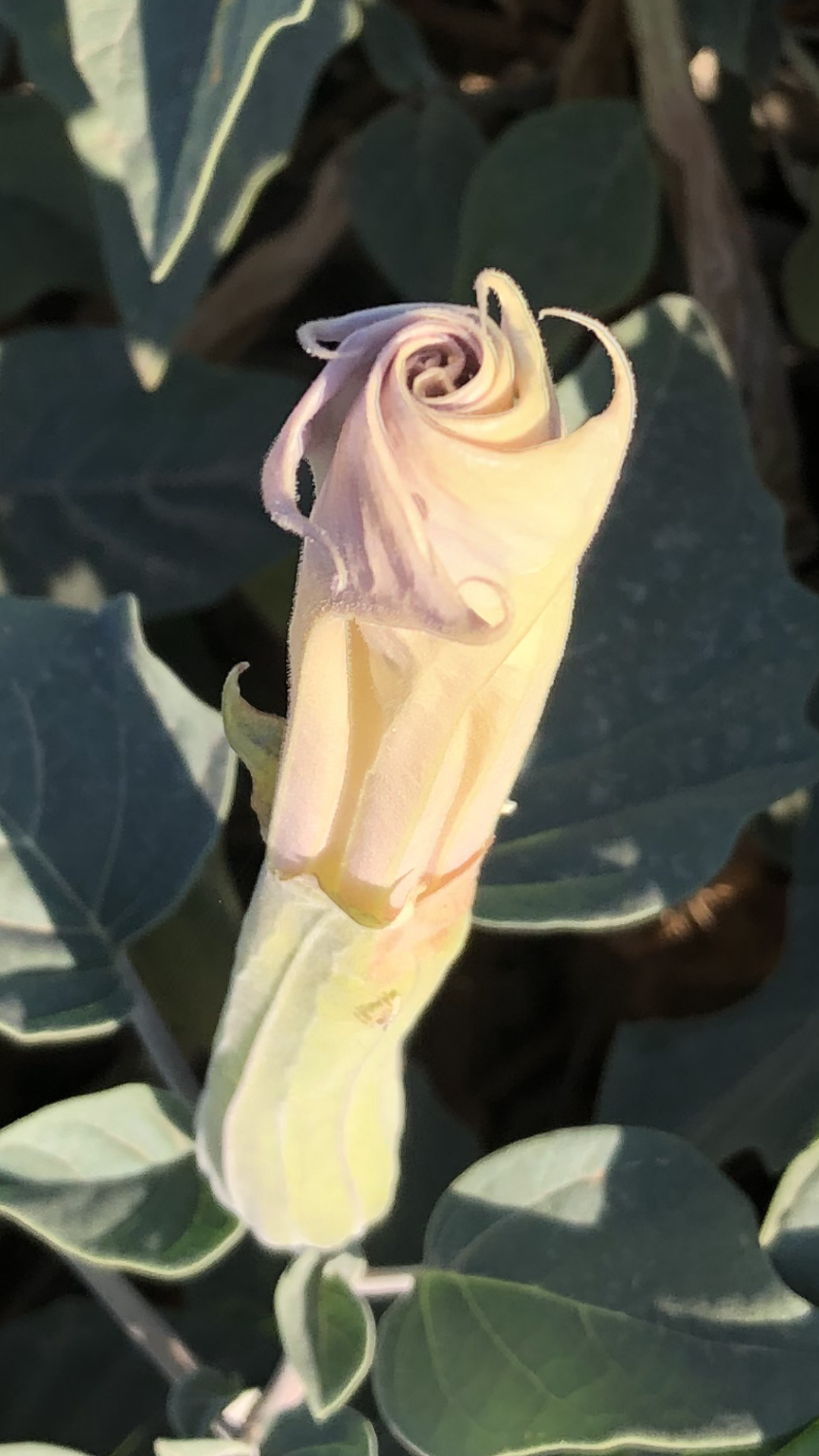 A furled Datura blossom will open for the first time once the sun goes down. 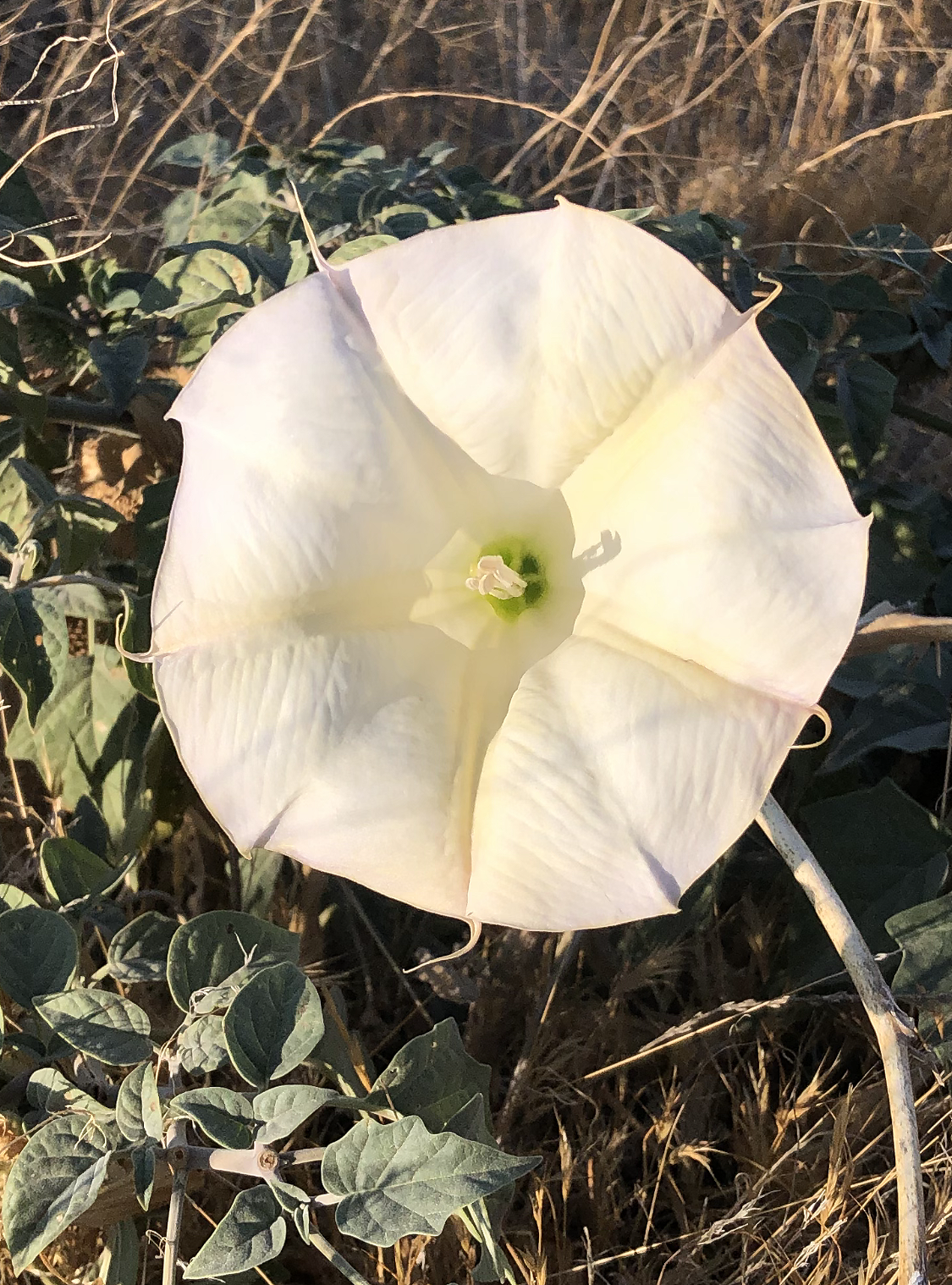 A freshly-opened Datura blossom, tinged around the edges with faint purple, against a blue Tehachapi sky.

Datura plants like this one can occasionally sprawl as big as five or six feet across.

The late afternoon sun shines through a Datura blossom.

A Datura seed pod amid the bluish-green foliage. This is the source of the common name thornapple.

A furled Datura blossom will open for the first time once the sun goes down.

Throughout the summer, large, white trumpet-shaped flowers appear in unlikely places in the Tehachapi Mountains: alongside roads, in fallow fields, vacant lots, etc. These blossoms mark the location of a bluish-green plant with a long and sometimes dark association with humans: Datura.

Also known as jimsonweed or moonflower, its botanical name is Datura wrightii. Unlike most of its typical neighbors that surround it when growing in disturbed soil or waste places, Datura is not an invasive non-native weed, but is actually a native wildflower.

The Nuwä (Kawaiisu or Southern Paiute) people of Kern County named the plant moopi, pronounced "mope" (rhyming with "rope). Datura is a powerful hallucinogen that was used for inducing visions during coming-of-age ceremonies or other shamanic uses.

The problem is that all parts of the plant are toxic. It is a member of the Solanaceae family, commonly known as the nightshade family. This family of 2,700 species includes some plants that have long been cultivated, including tomatoes, potatoes, chili peppers, tobacco and eggplant. It also includes many species that contain potent alkaloids, and have been used as poisons in centuries past.

The Nuwä used to make a concoction by soaking mashed Datura roots in water, and would then have a person take a drink or two of the evil-smelling liquid, usually during an initiation ceremony for young people. The result was an intoxication that might last a day and a half or longer. Animals seen in Datura-fueled visions were regarded as significant throughout the life of the individual.

Datura was regarded by the Nuwä as what has been called an entheogen, or a drug that causes alterations in perception or cognition for spiritual purposes. It was never used recreationally, and most Native people only experienced it once in their lifetime. The use of moopi was justifiably regarded with a mixture of respect and fear.

When the scourge of alcohol arrived into Nuwä territory, they didn't invent a new word to describe someone who was intoxicated, they used mooyed (pronounced moy-yed), the existing word for people under the influence of moopi. To this day, Nuwä people describe someone who is drunk as being mooyed.

The use of Datura species as an entheogen is believed to have originated in Mexico, where it is known as toloache, and gradually moved north into what is now the U.S. Even with careful use and precautions, Native people ingesting Datura sometimes died as a result.

Americans in modern times have often fared badly when experimenting with Datura. Many have been sickened and some have died. In 1972 alone, the Bakersfield Californian reported that two teenage boys had died at Red Rock Canyon State Park from ingesting Datura, and in a separate incident, a man had died and his friend was left unconscious from consuming Datura.

I have had friends who tried smoking Datura. One soon became blind, everything went totally black, and then when his vision returned later that day, there was no color — everything appeared black and white until the next day. I have some simple and wise advice: never consume Datura in any way, shape or form.

Since it is related to tomatoes, Datura is also a host of large hornworms like those found on tomato plants -- the familiar tomato worms. While gardeners dislike them, and they can certainly mow down a lot of tomato leaves, these finger-sized larvae eventually metamorphose into large and beautiful moths.

Datura gets the name moonflower because it is a vespertine-flowering plant, meaning its blossoms open in the evening. Vesper is an old Latin term for evening, and lends its name to the assorted vesper bats, the kind that emerge at dusk. The big Datura flowers, which are often tinged with purple initially, unfurl for the first time in the evening, and then remain open until they wilt and fade after a few days.

Datura flowers that are successfully pollinated form a spiky round seed capsule, which is the source of another of the plant's common names: thornapple.

I enjoy seeing the snowy white, soft parachute-like blossoms of Datura in their often drab surroundings . They are very drought tolerant and grow where few other plants will. I look, but I avoid touching them, and wash my hands if I do. They have earned my respect.