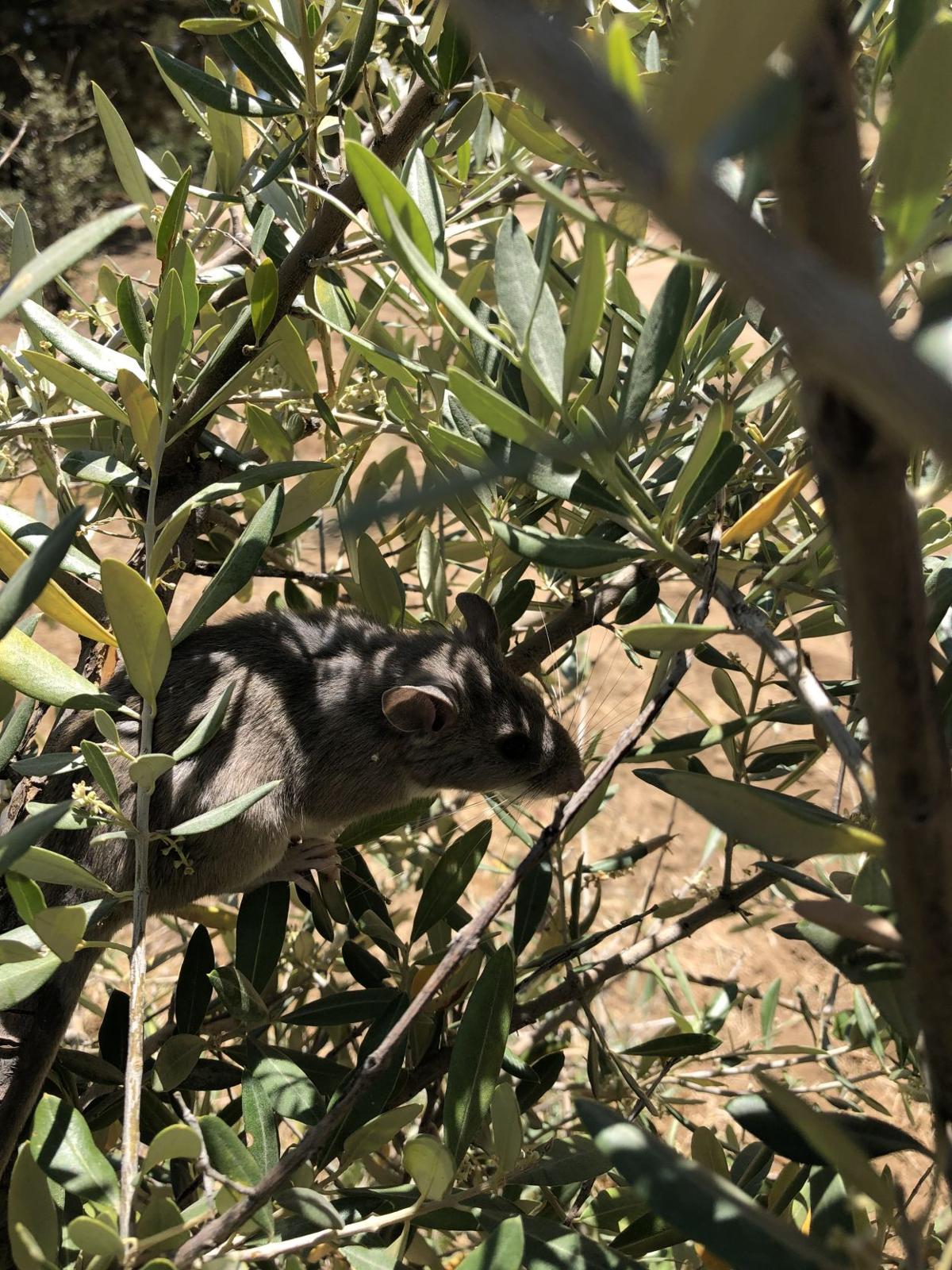 A woodrat during the day hides out in the branches of a small shrub. 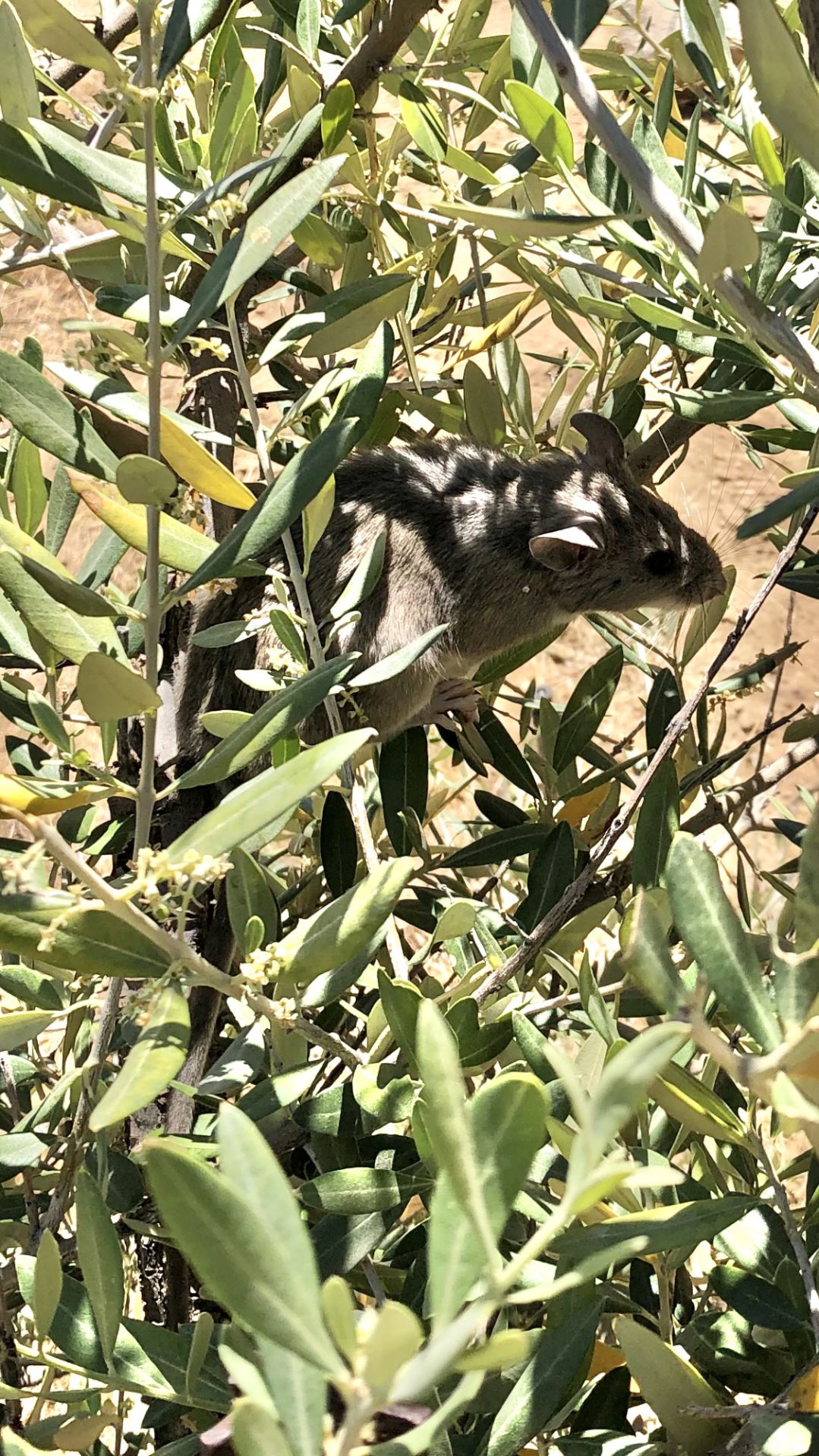 A full grown woodrat may be 16 inches long, but half of that is their tail. 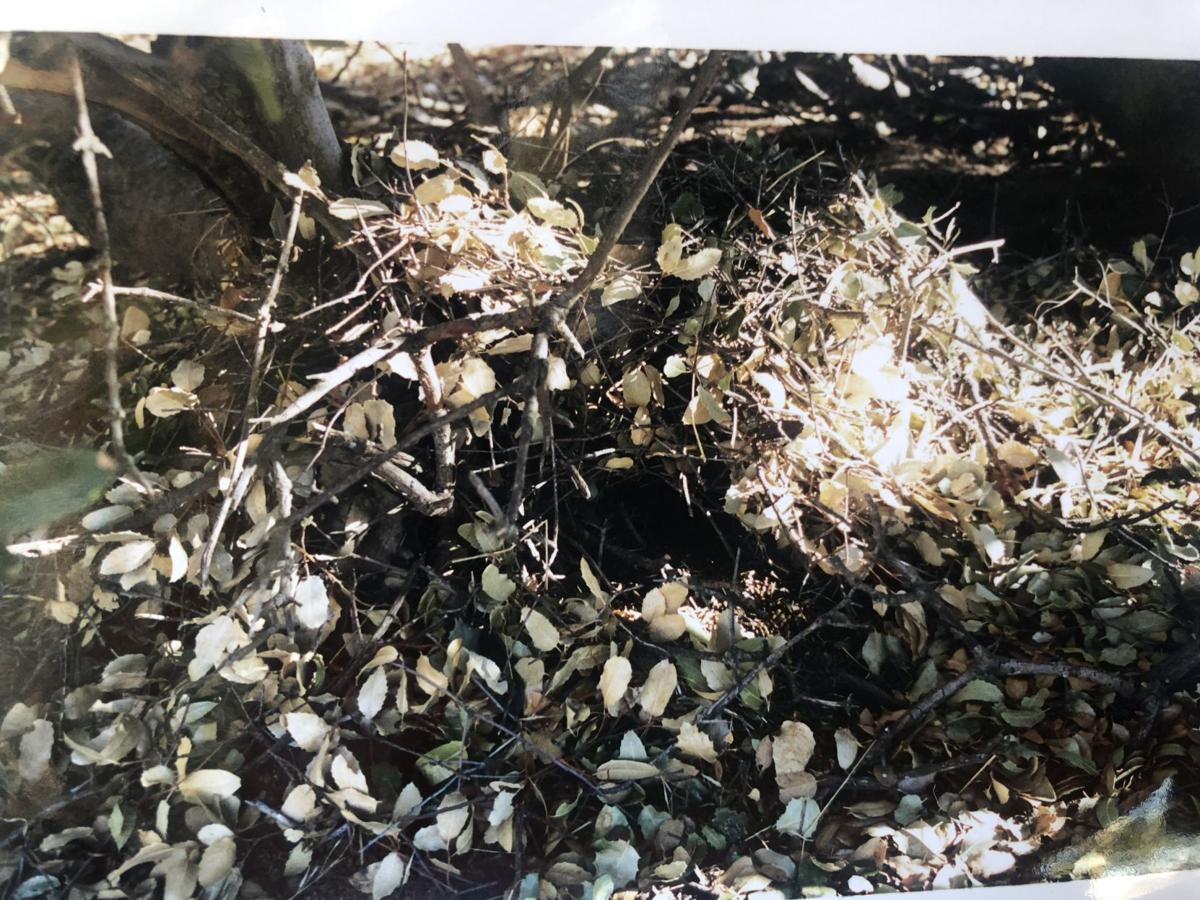 A woodrat den at the base of an evergreen shrub oak. 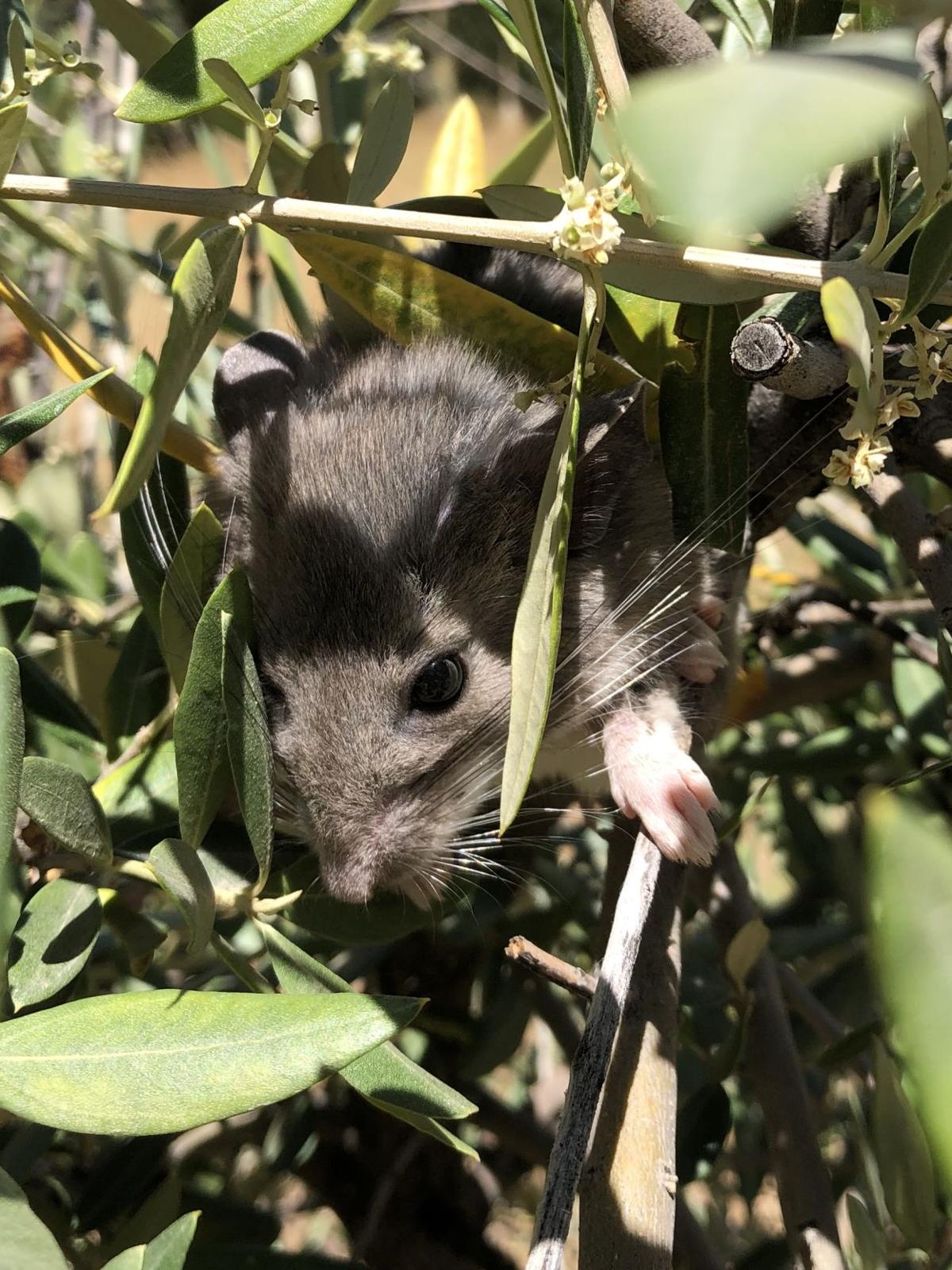 Woodrats look more like oversized mice than they do city rats.

A woodrat during the day hides out in the branches of a small shrub.

A full grown woodrat may be 16 inches long, but half of that is their tail.

A woodrat den at the base of an evergreen shrub oak.

Woodrats look more like oversized mice than they do city rats.

There are many creatures in the Tehachapi Mountains whose abundance is not reflected in the relative scarcity of sightings of them. A good example is the common Dusky-footed woodrat, which is found throughout the area but not often seen by people.

Any animal with the word "rat" in its name is guaranteed to inspire a certain amount of revulsion in humans, but dusky-footed woodrats (Neotoma fuscipes) are unlike the black rats or brown rats that are associated with disease, unsanitary conditions and urban filth.

For one thing, woodrats are studiously solitary and don't form large colonies. Rather than live in human structures, they mostly prefer to build their own shelters out of sticks, twigs and small branches that they have gathered.

These woodrat houses, which are typically three- or four-feet tall, are conical or dome-shaped and usually built right in among the branches at the shady base of a shrub or tree. They look like little dry land beaver houses.

Sometimes woodrats build their homes up in the branches of a tree or tall shrub. These often belong to male woodrats, while the females build larger nests on the ground where they raise small litters of offspring, usually only two babies at a time. Incorporating sticks and leaves from the immediate vicinity, these stick houses tend to be inconspicuous and unnoticed despite their size.

Even the entrance holes to the nest dome are often kept indistinct and can be hard to spot. Inside the woodrat den is a nesting area and one or more pantry chambers which are used to store leaves, nuts, seeds and other food for the future.

Predators like coyotes may try to take apart a woodrat den to get at the rat inside, but the nests are so large they usually give up without reaching the occupant. I've also heard that woodrat domes typically have an escape exit, and the rat may slip away while the predator is occupied with trying to disassemble a structure that was built over weeks and months, if not years. Woodrats typically don't venture further than 100 to 150 feet from their den.

Though they are usually nocturnal, woodrats can occasionally be found foraging during the day, or lounging up in the branches of a shrub.

While the term dusky-footed woodrat has long been the official common name of this rodent, a better-known name among those familiar with them is "pack rat." They get the name pack rat because they apparently intrigued by small objects that attract their attention, and they may bring them back to their den of sticks.

In remote locations without humans, these items may include things like acorn caps, random small bones, shiny pebbles, insects, etc. In areas with people, nearly any small item can wind up being carted back to a pack rat home, including bottle caps, broken glass, keys, coins, empty brass cartridges, etc.

Another common name for woodrats is "trade rats," because if they are carrying one trinket and another catches their eye, they'll take the new item and leave the other one behind in its place. My friend Lloyd Herziger has had pack rats visit neatly organized bins of pipe fittings and move one size of pipe fitting into a different bin — not randomly, and not taking them back to their den, but specifically rearranging the pipe fittings into different bins.

In addition to their other differences, dusky-footed woodrats don't look like city rats, they look more like oversized deer mice. Woodrats have larger rounded ears, large dark eyes and shorter, rather than pointy, faces. They also have short sparse fur on their tails rather than having them completely bare. A friend of mine found a freshly dead woodrat and thought he was looking at a deceased baby opposum.

They get the name "dusky-footed" because the tops of their larger hind feet are dark. Their front feet are pinkish, and their overall body color is gray or tan, and their fur is softer than city rats.

The genus Neotoma includes three other similar species of California rodents, all collectively known as woodrats or pack rats. These creatures have proven invaluable to scientists because they create what are called pack rat middens. These are the items that they have collected, which they leave in part of their home that eventually becomes a latrine.

The Woodrat urine cements the items together and eventually becomes as hard as stone, turning into a material known as amberat. Archeologists, climatologists and other scientists have soaked amberat to separate it, and found the seeds and pollen of extinct plants, the bones of extinct animals and have derived all sorts of useful data. Items have been radiocarbon dated back an incredible 50,000 years.

The Nuwä (Kawaiisu or Paiute) name for woodrat is koz, pronounced "kaaz," and the dens are called koz kahni ("woodrat house").

While rats of any kind tend to freak people out, woodrats are native animals and an important part of the natural environment in California. Many other creatures take shelter in current or old, unused woodrat dens, and a variety of predators prey on them. And woodrats have lived here for thousands of years.