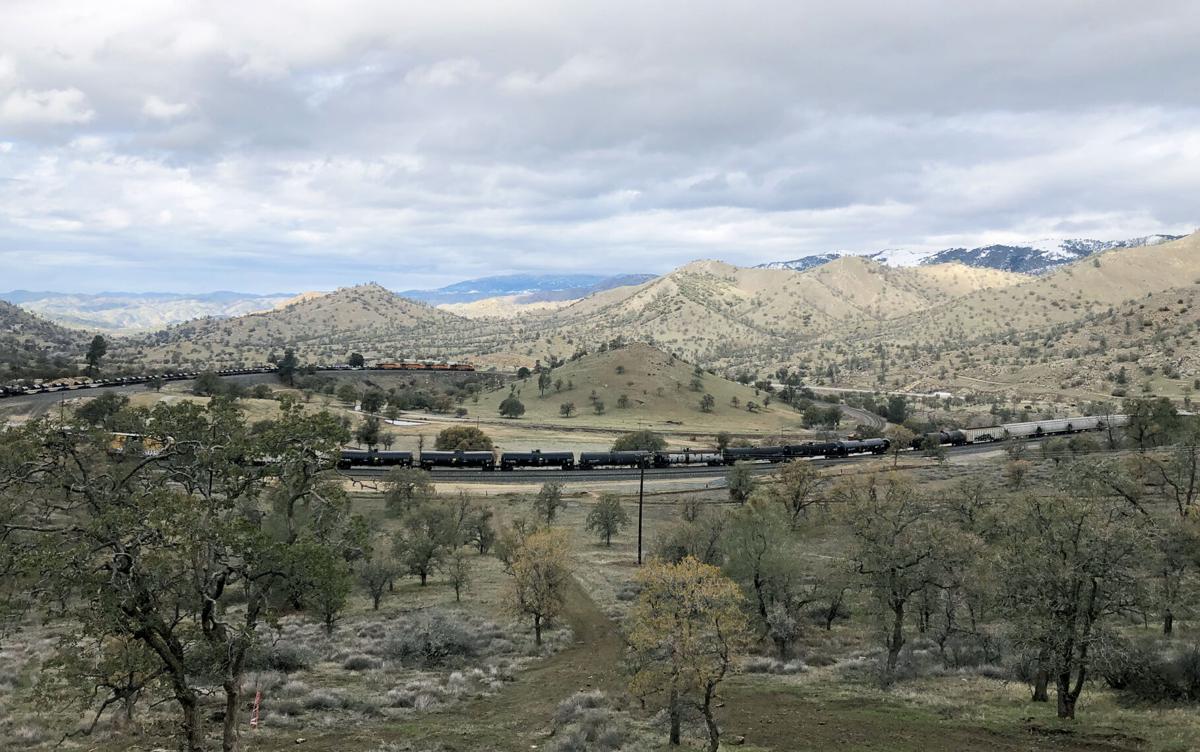 The Loop Ranch, named for the famed Tehachapi Loop that is located very near to the ranch headquarters, is now part of the new Frank and Joan Randall Preserve. 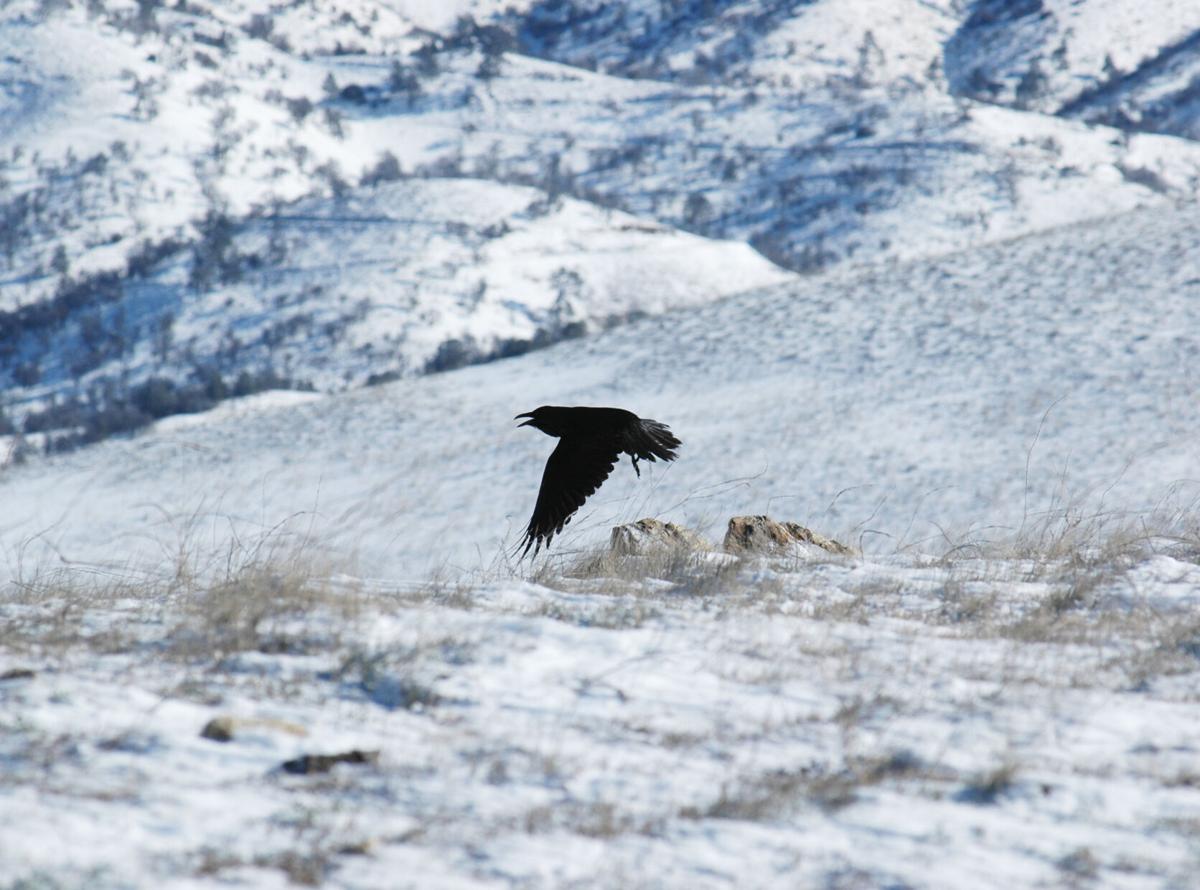 ) A raven flies over Loop Ranch property, which is now part of the Randall Preserve. 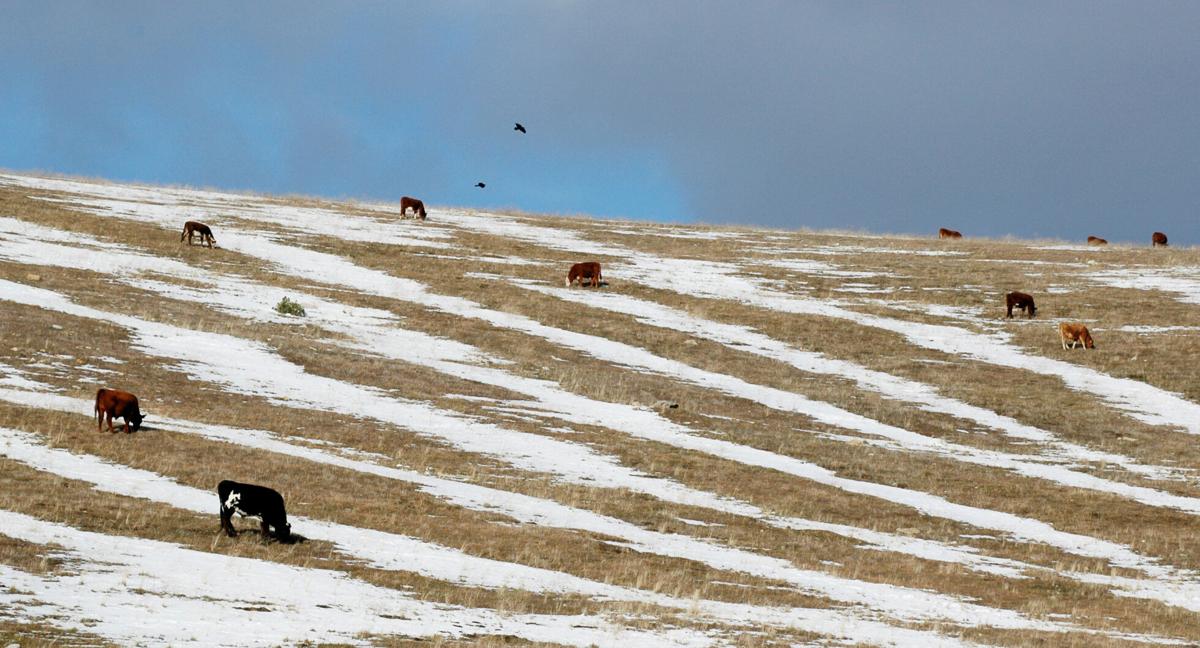 Cattle graze on the Loop Ranch just north of the city of Tehachapi. Cattle ranching will continue on the property.

The vast 28,000-acre Loop Ranch is now one of the centerpieces of the Randall Preserve.

Blue oak, gray pines, and other trees and shrubs dapple the wide expanses of the new Randall Preserve.

The Loop Ranch, named for the famed Tehachapi Loop that is located very near to the ranch headquarters, is now part of the new Frank and Joan Randall Preserve.

) A raven flies over Loop Ranch property, which is now part of the Randall Preserve.

Cattle graze on the Loop Ranch just north of the city of Tehachapi. Cattle ranching will continue on the property.

The vast 28,000-acre Loop Ranch is now one of the centerpieces of the Randall Preserve.

Blue oak, gray pines, and other trees and shrubs dapple the wide expanses of the new Randall Preserve.

One of the most transformational events in the recent history of Kern County land use has just been completed: the creation of The Nature Conservancy's 72,000-acre Frank and Joan Randall Preserve in the Tehachapi Mountains.

This is the culmination of years of work by TNC and other conservation entities and individuals. It began to take tangible shape in 2012, when TNC bought a conservation easement on the 9,600-acre Parker Ranch, and purchased outright the 7,300-acre Caliente Ranch and the adjacent 15,000-acre Tollhouse Ranch, which is located about 15 miles northwest of the city of Tehachapi.

The 3,000-acre Bear Mountain Ranch, which comprises nearly all of the north side of Bear Mountain, from Bear Valley Springs down to Hart Flat, was purchased more recently and added to the eventual total of nine ranching properties. These were purchased thanks to an incredibly generous gift of $50 million from philanthropists Frank and Joan Randall.

And now, one of the crowning jewels of the project was just officially added on Dec. 28, when TNC completed purchase of the 28,000-acre Loop Ranch. This sprawling rangeland begins near the location of the Adventist Health Tehachapi Hospital and extends west all the way to the community of Keene, 10 miles away, often along both sides Highway 58 as it winds down towards the San Joaquin Valley.

Some people over the years have referred to it as the Broome Ranch, and the Highway 58 overpass leading to the ranch headquarters is called Broome Road, because it was owned for decades by the John Broome family. However, the family has had another ranch on the Central Coast called the Broome Ranch, so the proper term is the Loop Ranch, since it envelops the famous Tehachapi Loop railroad feature three miles from Keene.

So why would The Nature Conservancy and other conservation organizations be interested in acquiring such a vast holding in the Tehachapi Mountains? The main reason is to serve as an intact wildlife corridor, allowing physical and genetic connectivity in California.

Two of the main mountain ranges in California are north-south trending: the Sierra Nevada and the Coast Range. These two mountains ranges, and their associated foothills and valleys, run up and down in a roughly lengthwise direction in the state. The Great Central Valley (San Joaquin and Sacramento Valleys) that separates them is now so developed and altered with industrial agriculture that wildlife no longer crosses the valley as it once did.

However, the largely east-west trending Tehachapi Mountains, one of the Transverse Ranges, can serve as a connector between the north-south mountains, thus joining Northern and Southern California. This ecological function was identified more than a decade ago and has been referred to as the "Tehachapi Linkage" or the "Tehachapi Wildlife Corridor." Much of the Tehachapi Mountains has remained undeveloped ranchland, so wildlife has continued to be able to move back and forth.

This helps to maintain genetic diversity among the mountain lions, black bears, bobcats, coyotes, foxes and other animals that live in California. It's not as though individual bobcats from San Diego, for example, are going to go on an epic trek through the Tehachapis and continue all the way up to Susanville to find a mate.

However, those same bobcats can pass their genes on by coupling with bobcats further north, say in the San Gabriel Mountains, and their offspring might mate with bobcats in the Angeles National Forest, and one of them might move north into the Tehachapi Mountains and have kittens here. Some of those bobcat kittens might grow up and continue to disperse to the north into the Sequoia National Forest and the Sierra Nevada.

In this general way, genes slowly flow through an ecosystem, preventing inbreeding among resident animal species and maintaining genetic diversity. When populations are isolated, however, as they can be from surrounding human development, they risk becoming genetic islands with inbreeding and its assorted problems. This has been well-documented among isolated mountain lion (puma or panther) populations living in Florida and in the Santa Monica Mountains.

So the Randall Preserve is intended to help maintain the access and connections that animal populations need to stay genetically robust. The extensive elevation range, from a low of 800 feet up to a high of nearly 7,000 feet, will also give animals places to which to migrate, if they need to move as a result of warmer temperatures in the decades ahead.

"We have a substantial elevational gradient where species can move up," explained TNC's Zach Principe, an affable and positive conservationist, who is the stewardship project manager for this area. I have worked with Zach while volunteering for California Native Plant Society revegetation projects, and we have become friends. "We led this group effort to create a preserve in order to maintain connectivity, and resilience, in this very significant California landscape," he continued.

The Highway 58 corridor itself, which runs through the preserve, presents its own obstacle to connectivity.

About 20 years ago, Caltrans completed a nearly unbroken stretch of concrete K-rail in the center divider between the eastbound and westbound lanes of Highway 58. This barrier stretches from the summit nearly down to the San Joaquin Valley floor, and was installed in response to decades of tragedies when cars, or worse yet semi-trucks, failed to negotiate a curve and ended up causing a head-on collision in the opposing lanes.

The completed K-rail project achieved its goal and has made Highway 58 safer and less lethal for humans, but it also created an intimidating barrier in addition to the already imposing four-lane freeway. Some animals, like deer, can vault the barrier, but for smaller ones like badgers, the center divider is completely impassible.

Principe said that TNC biologists were working with Caltrans to identify undercrossings, both ones already in use, as well as potential ones that could be improved. I have hiked to Keene alongside Tehachapi Creek, and there are a number of places where there are culverts that pass underneath Highway 58 or the railroad — and if there is mud, you can sometimes see the tracks of raccoons, foxes and other animals that use these tunnels.

To provide better, safer access for animals, there may also need to be a wildlife overcrossing above Highway 58 in the future. There will be years of ongoing study to determine how to optimize the Randall Preserve's ecological benefits.

So does this mean that cattle ranching is over on these historic ranches? No, actually not. Invasive annual grasses that arrived two centuries ago with livestock now carpet California's rangelands, and each summer when they dry out, they substantially increase fire danger. Cattle grazing can help lower the wildfire risk, and reduce the fuel load so that even when there are fires, they don't burn as hot and kill fewer trees and shrubs.

The Nature Conservancy has had ongoing cattle leases on the ranches that they bought back in 2012, these will remain, and a new rancher will be running cattle on the Loop Ranch. Rangelands within the Randall Preserve will be managed to protect their ecological value and durability.

Principe told me that there will be some limited public access and guided tours to parts of the Randall Preserve. There is some access now near the city of Tehachapi, but there will need to be more analysis to see where and when that will be compatible with the purpose of the preserve.

Right now, this news is just such a source of joy, amazement and gratitude for me. I grew up in the Tehachapi Valley, and have spent more than 50 years looking across the valley floor and admiring the hills and mountains to the north. And the best part of a drive to Bakersfield has always been those 10 miles of winding through Tehachapi Pass on Highway 58 between Tehachapi and Keene. You drive past an undulating landscape of blue oaks, gray pines and California buckeye trees, with arroyo willow, California sycamores, Fremont cottonwoods and canyon oaks lining the meandering corridor of Tehachapi Creek below.

Now it's all been protected — for the present and in perpetuity. There will be no housing developments, no wind turbines, no quarries or mines or paved roads. Just wildlife, native plants as much as possible, and some cattle. This is a win for the Tehachapi Mountains.