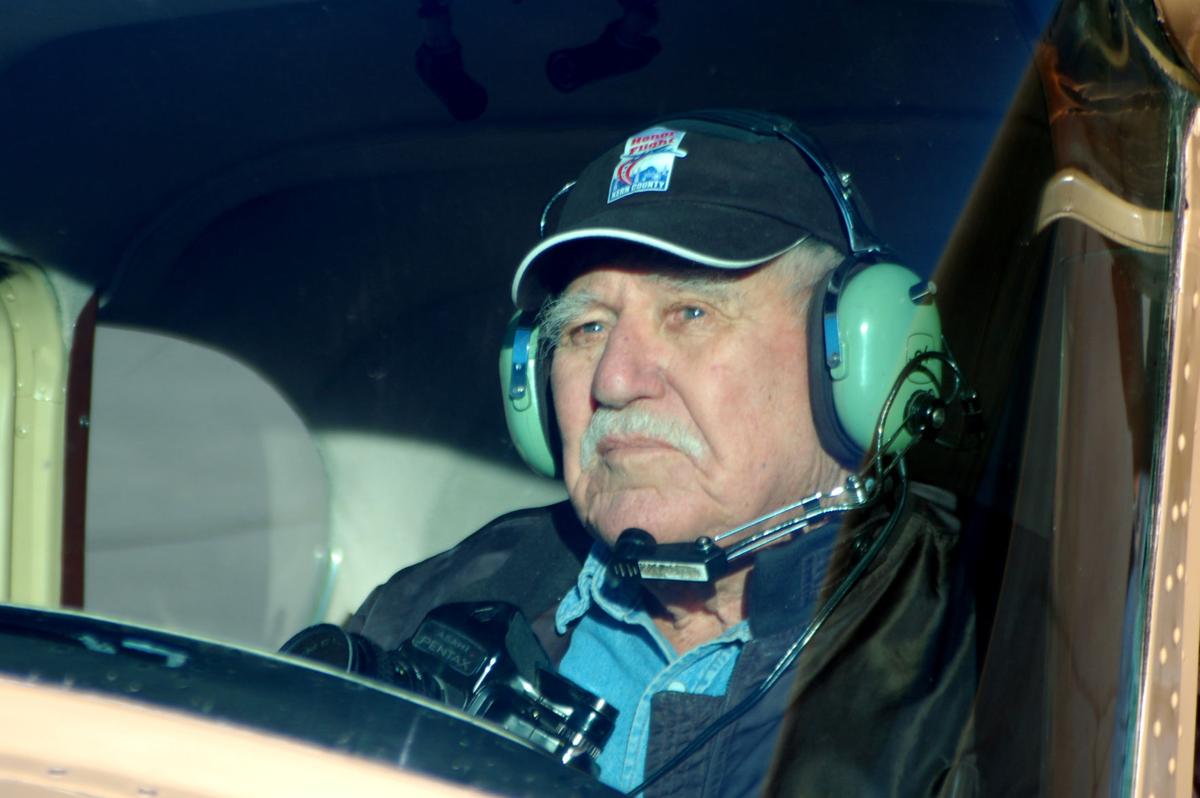 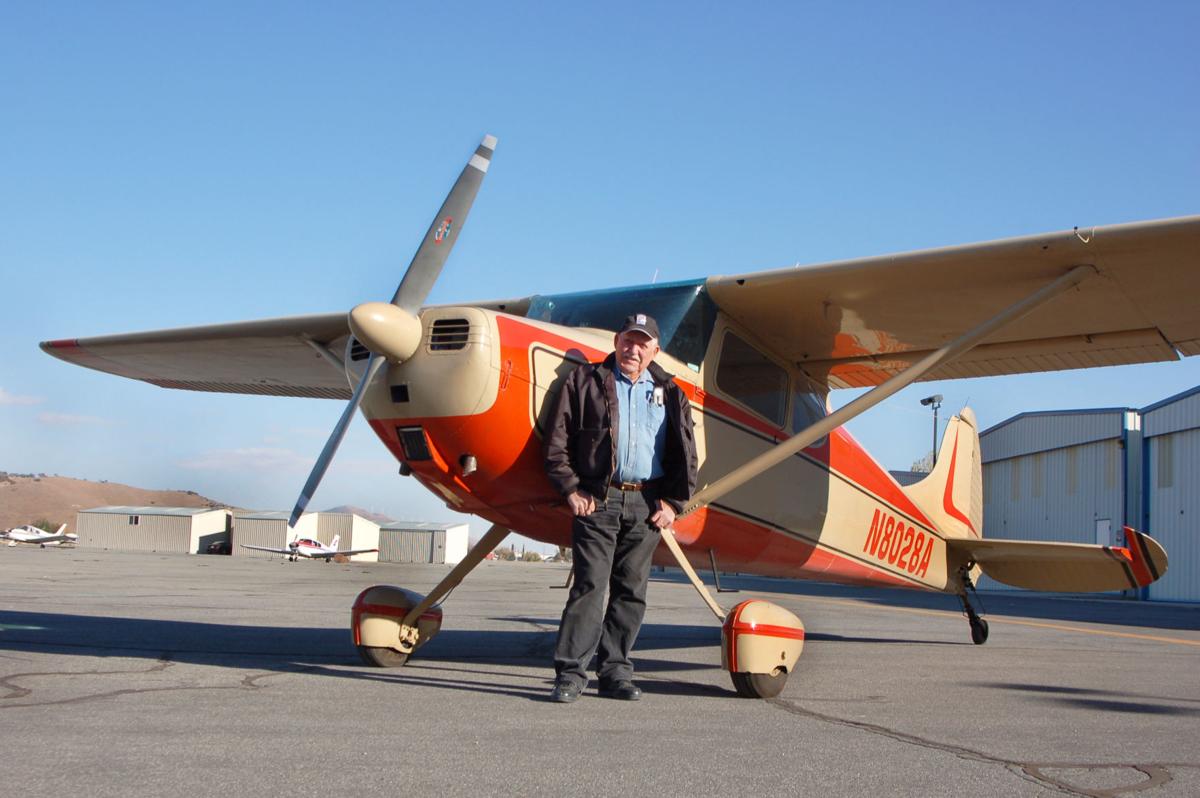 George and the Cessna 206 he used to make his living as an aerial photographer. 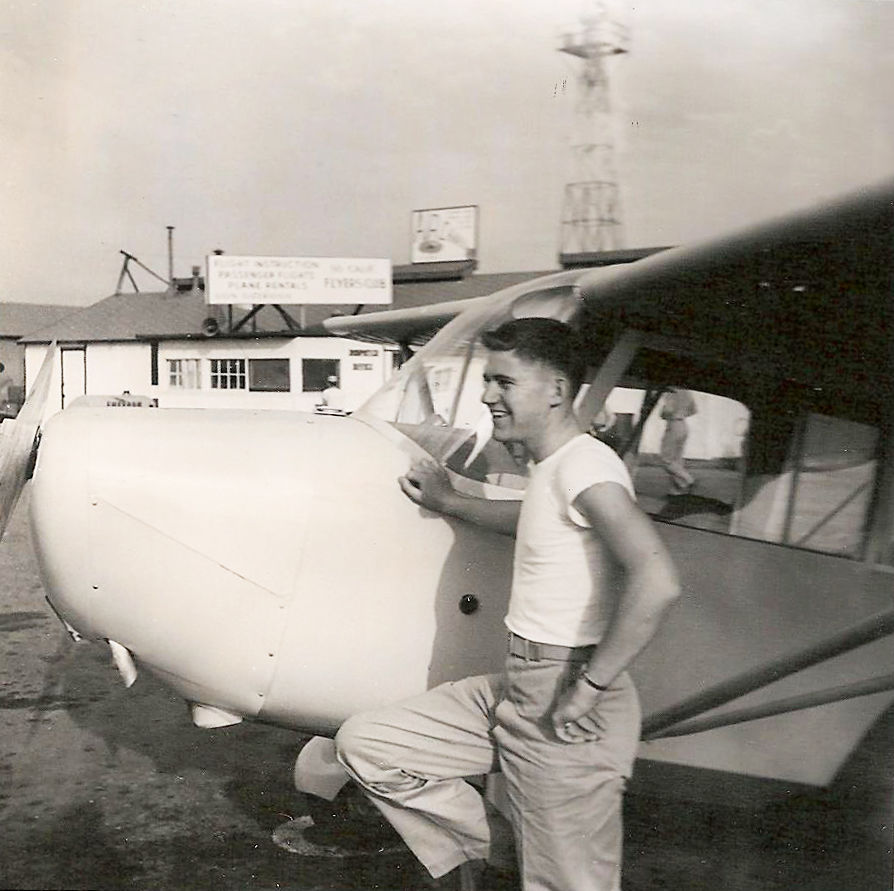 A young George Sandy in 1948 when he first got his pilot's license. 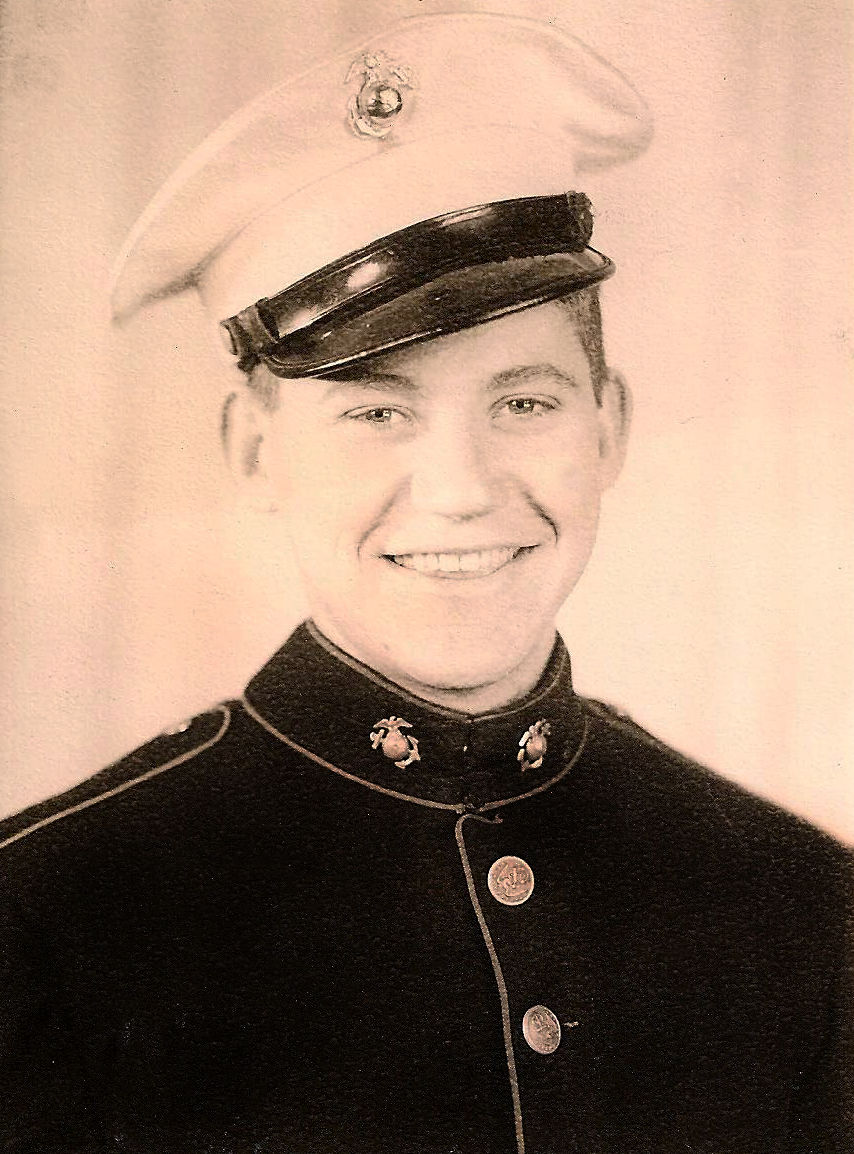 George in the Marine Corps just after World War II. 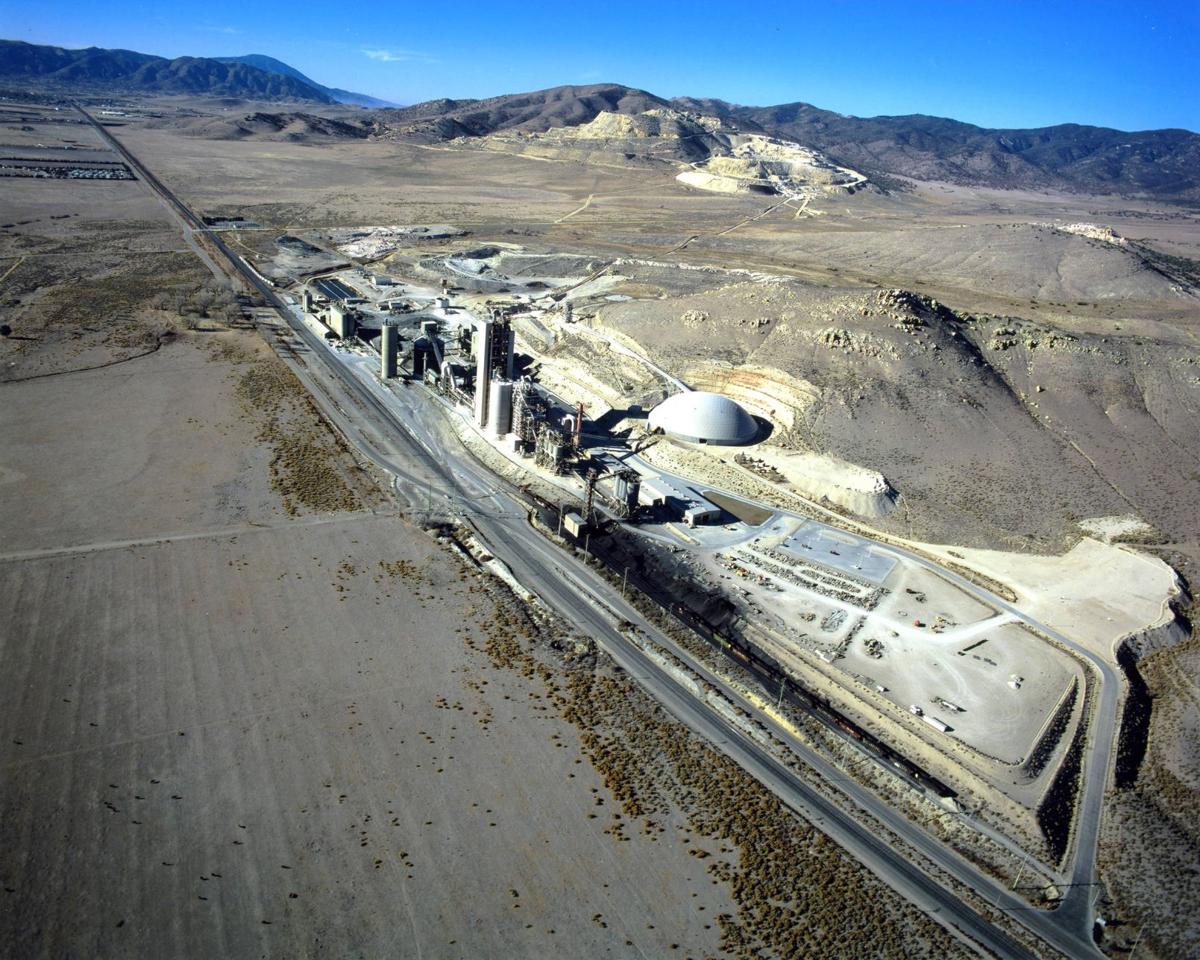 Photograph by George Sandy of the Lehigh-Southwest Cement Plant and the Tehachapi Valley from the air.

George and the Cessna 206 he used to make his living as an aerial photographer.

A young George Sandy in 1948 when he first got his pilot's license.

George in the Marine Corps just after World War II.

Photograph by George Sandy of the Lehigh-Southwest Cement Plant and the Tehachapi Valley from the air.

The Tehachapi area recently lost one of our most experienced, respected and beloved citizens with the passing of George Sandy, 92, who died on April 29 following a fall and several weeks of hospitalization.

George was a pilot and an aerial photographer, and his amazing life would fill a book. There are people who bear the weight of their years heavily, their optimism and sense of delight worn out by the passage of time. And then there are those like George, who at 92 was still upbeat and positive, a thoroughly charming man who still had the good humor and mischievousness that characterized him since boyhood. He led an adventurous and fulfilling life, thanks to a combination of hard work and good fortune.

"You're talking to the luckiest man in town," George once told me, "I've had hard times, sure, but I've also had so many wonderful times, and I've been surrounded by some of the finest people in the world. Life has been good to me, more than I ever thought possible."

Life for George began on a cold Massachusetts morning in Worcester on March 3, 1928. His father Cecil Sandy was born in Scotland but immigrated with his family when he was only six years old — because Cecil's father was a skilled weaver in the United Kingdom carpet mills, the family didn't have to pass through Ellis Island like the huddled masses did. George's mother, Jessie Fogg, was a British immigrant who had also been able to skip Ellis Island because her father, too, was skilled — both of George's grandparents had worked at the same carpet mill in England.

George came from a military family: Cecil was in the U.S. Marine Corp during the Haitian Rebellion in 1918, and he had been wounded in the leg, and his brother Gilbert was an American serviceman who had been killed in France fighting during World War I — as a boy, George played taps for his Uncle Gilbert every Memorial Day. An expert marksman, Cecil ended up as rangemaster for a state rifle and pistol range used by both military and civilian personnel.

The state range was not just a workplace for Cecil, a house there was also home for the Sandy family, which was substantial. "There were eight of us kids, plus my parents, and one set of grandparents lived with us, so there was twelve at the table all the time," George remembers, "That was the one cardinal rule in our family — everyone had to be home to gather around the dinner table."

One day when he was 16, George was injured while riding his brother's horse — the horse stumbled and rolled over on George, hurting him and cracking some of his ribs in the process. George's normally reserved father Cecil ran to his son's side, picking him up and cradling him in his arms as he carried the injured boy to an ambulance. Wild ring-necked pheasants lived at the range, and one happened by right then. "See that pheasant, George? When you get home, we'll see we can find it and have pheasant for dinner," Cecil said to his son. "And I never saw my father again," George told me. While George was at the hospital, Cecil Sandy suffered a fatal cardiac arrest at just 43 years old — medication given to him to treat malaria he contracted while in the Marine Corp had destroyed his young heart.

For a time after Cecil's tragic early death, the Sandy family continued to live at the state range, and George even ran the range for awhile. He was no lazy teenager — his schedule when he was in high school, during the years of World War II, was typically like this: up at 5 a.m. to work at the local postal office sorting mail; school from 8 a.m. to 12; then working for 30 minutes at Tony Frosthome's diner, followed by 30 minutes to eat the meal he earned by working the previous half-hour; back to school at until 2:30; working at Jim Smith's gas station until it closed at 9 p.m., then finally home. In 1945, on the day George turned 17, he joined the U.S. Marine Corp.

Now George went into the Marines under one condition: that he be allowed to get into aviation. He had been fascinated by flying at an early age — he even moved his bedroom up into the attic just so he would have room to lay out the balsa wood airplanes that he glued together. When he was just 13, he spent a whole week's pay for a brief ride in a Stearman biplane. The pilot put three kids on a plank seat in the front, while he controlled the plane from the back seat. "I was hooked," George says, "I went into model building, never dreaming that one day I'd own a real plane."

The Marines kept their end of the bargain, and assigned George to the VMF (N) 533 Marine Air Group 24, which meant that he got to go to Northern China and fly as a night fighter in Grumman Tiger Cat planes. It was just after World War II, and there was lots of misery. "If the people weren't torn up by the war, then they were starved, or both," George told me, "It was pathetic. Life was cheap there. I ended up spending four years and a month in the Marines, and I loved and hated every day of it." Not only did George end up in the Marine Corp, so did one of his sisters and one of his brothers, as well as George's son, George Jr.

In 1948, George came back stateside to the El Toro Marine Base. At that time he borrowed $200 and went to the Eddie Martin Flying School in Orange County. He had done only a little flying in the military, since he wasn't a pilot, but after a mere 3 and 1/2 hours of dual time in a small Aeronica airplane, he soloed and got his pilot's license. That was the sum total of his formal flying education until many years later when he took school to get his instrument flight rating. The boy who loved planes began flying them, and after more than 20,000 hours of flying time, he was still at it until his passing.

George bought a 1946 Piper Cub in 1950, and he owned planes ever since. He worked at China Lake Naval Ordnance Test Station in 1950 and 1951, testing the basic propellant used for Sidewinder missiles, and actually flew into the Tehachapi Airport at that time.

"We had a little Cessna 120 that we flew back then," George says, "We would come up to Tehachapi from Ridgecrest. Back then we'd usually land on highways and fill up with auto gas." In 1969 George started an aerial photography business, which became his lasting career — George's photography company was the longest continuous single owner business at Orange County Airport. With a Cessna 206 turbocharged plane, George flew many thousands of flights taking aerial photographs — one of his biggest clients was the Irvine Company when they were developing their portion of Orange County.

George bought a house that was still under construction in Tehachapi in 1988, and then bought a hangar from his friend, Joe Townsend, who was the Tehachapi Airport Manager. George and his wife, Lucia, who were together for 40 years (and worked together the entire time) put an Airstream trailer inside the hangar and stayed there on weekends until the house was completed. George helped found the Tehachapi Society of Pilots in 1988, and he and Lucia moved up here fulltime in 1990. George was still an active and busy guy, who built six hangars at Tehachapi Airport.

Because of the pandemic, we could neither visit George in the hospital nor mourn him with a proper funeral. But his legion of friends in Tehachapi will never forget that inspiring, congenial and amazing man.