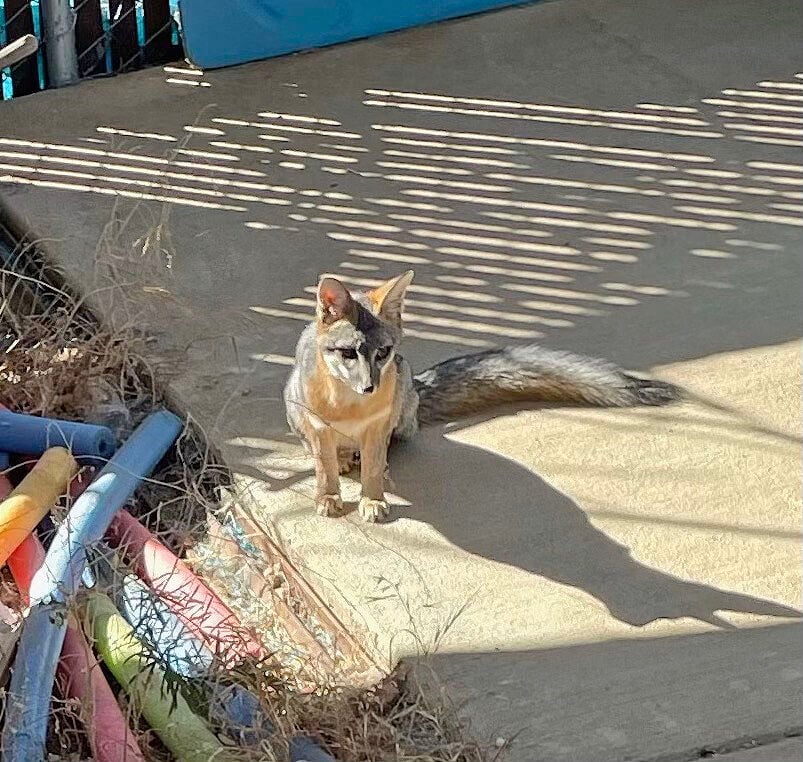 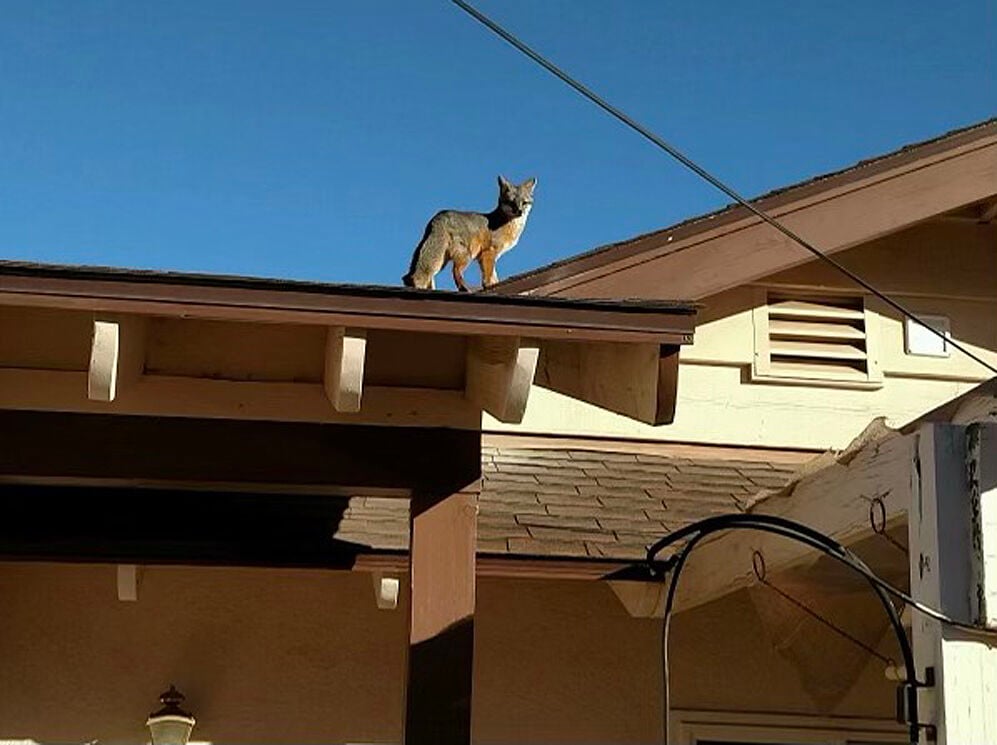 A Gray Fox surveys its surroundings from atop Mountain Bible Church. 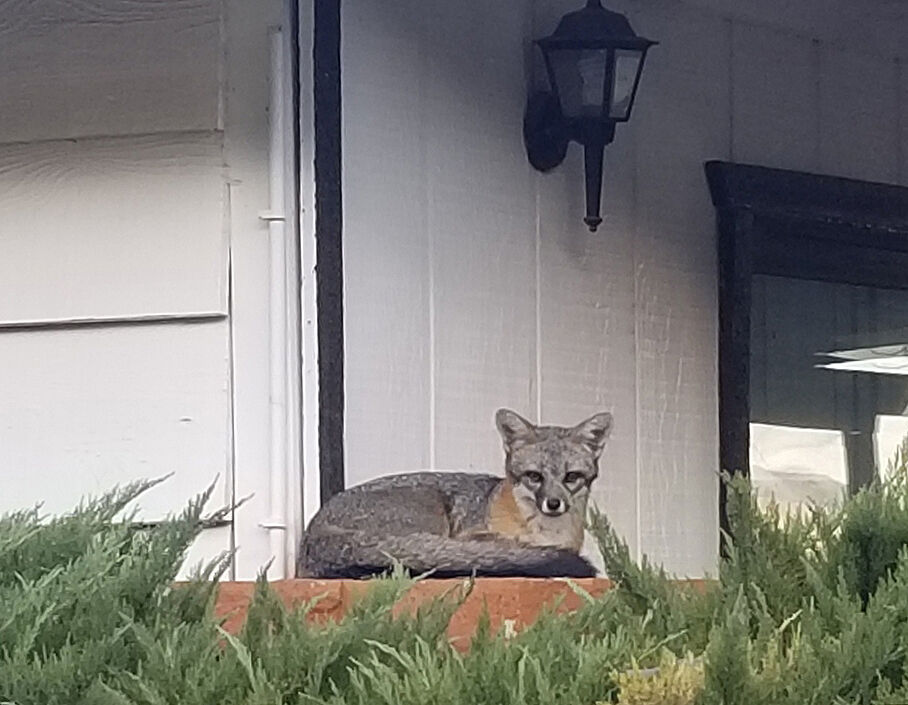 A Gray Fox watching from a brick pillar in Golden Hills. 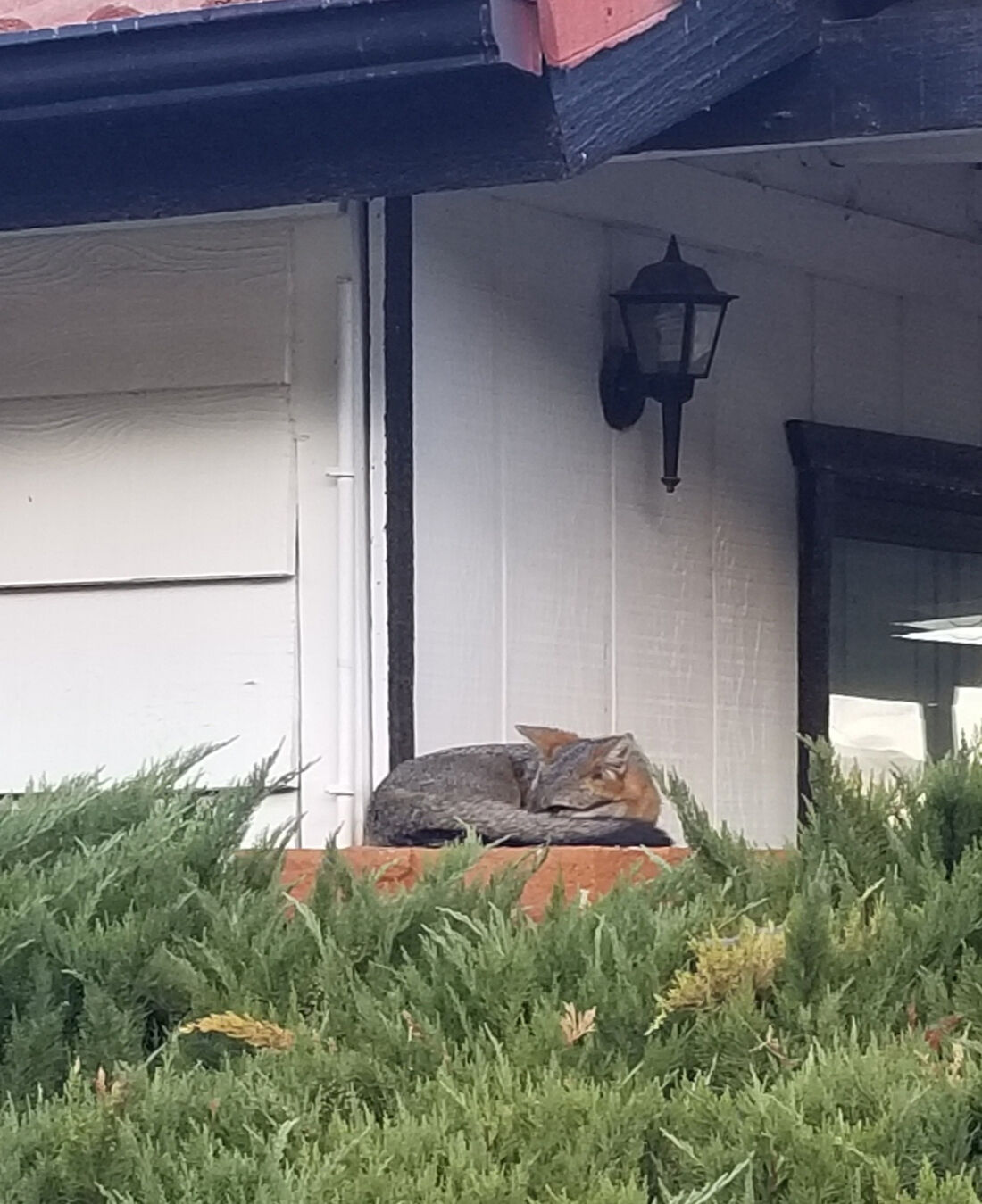 Gray Foxes mostly sleep during the day and do most of their hunting at night. 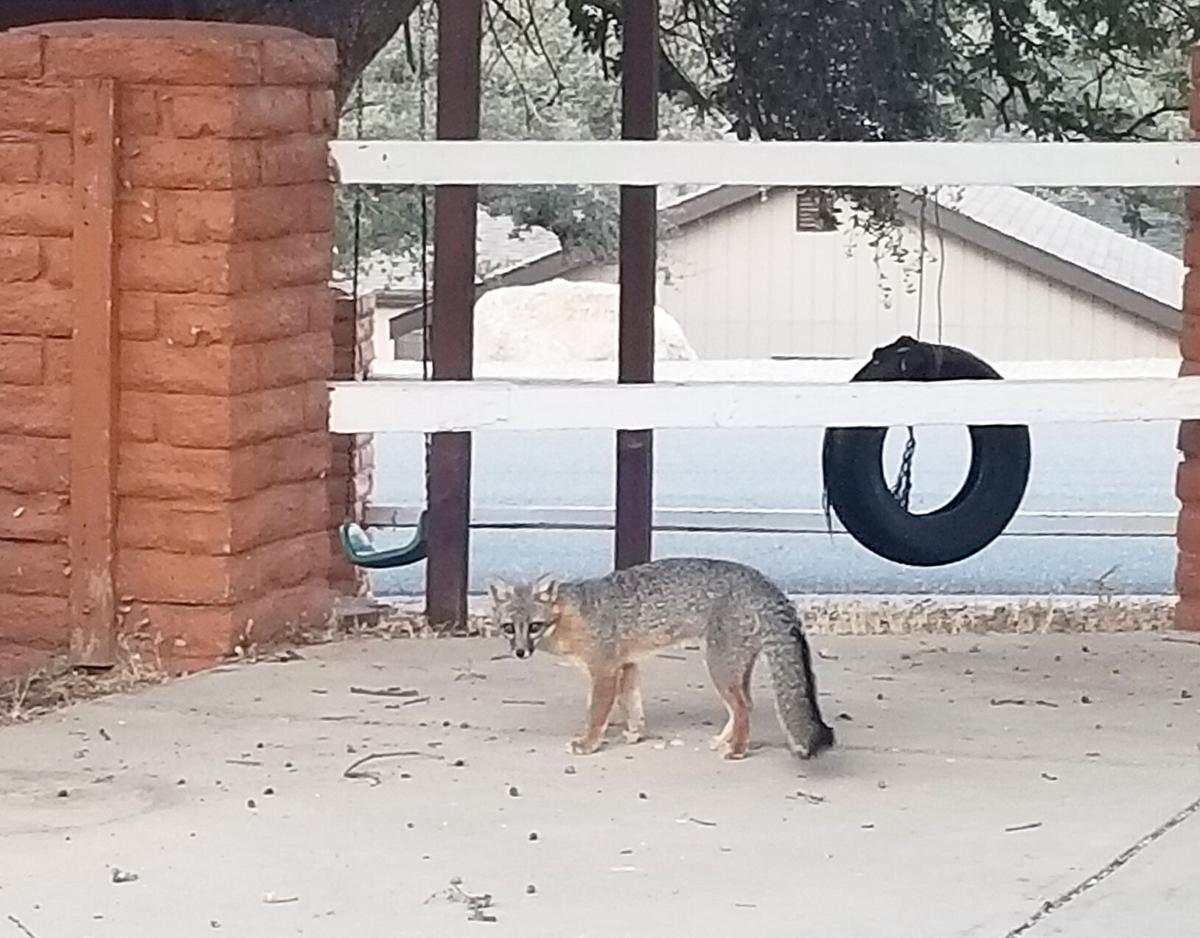 A Gray Fox surveys its surroundings from atop Mountain Bible Church.

A Gray Fox watching from a brick pillar in Golden Hills.

Gray Foxes mostly sleep during the day and do most of their hunting at night.

California Gray Foxes (Urocyon cinereoargenteus californicus) are small, cat-like foxes who are able to lead quiet lives right in among populated areas. I have been asked over the years if a friendly-acting fox might have been raised by humans or once been someone's pet, but the truth is that wild Gray Foxes are often naturally docile around people.

As long as you aren't noisy or aggressive around them, Gray Foxes may visit homes to sleep on a wooden deck, drink from a bird bath, take shelter in a woodpile or even raise their kits under a backyard shed. They tend to avoid homes with a dog — Gray Foxes are diminutive creatures that are killed by larger canines like coyotes and red foxes — but they are tolerant of house cats and are neither threatened by nor pose any threat to a domestic cat.

Linda Lichtenwaldt took these photos of a Gray Fox that has been seen recently around the Mountain Bible Church in the Tehachapi city limits. Nicknamed "Bible" by church members, the little fox frequents the church buildings and surrounding property.

Unlike almost every other canine, Gray Foxes are able to climb well, and they use their hooked claws to scramble up into trees and on top of structures. This unusual trait likely evolved to help the small foxes escape from larger predators.

When Eda Erdener was living in a house in Golden Hills, a Gray Fox started making regular appearances and dining on cat food left outside. Eventually the mother fox showed up with three small kits, and the family took up residence in a treehouse in the backyard. Eda took the other photos that accompany this story.

As Eda would return from work, she would sometimes find the mother fox sitting on top of a brick pillar like some kind of temple guardian. Rather than feeling any concern about the presence of a wild (or at least, non-domesticated) animal at her house, Eda said that she felt honored by the fox's acceptance and trust. Eda later moved into Downtown Tehachapi, but she said that she would never forget her six-month friendship with the fox, and felt privileged to experience it.

Six of the eight Channel Islands off the coast of California contain populations of the Island Fox (Urocyon littoralis), a very small species of fox that evolved from Gray Foxes on the northern islands of Santa Rosa, Santa Cruz and San Miguel. Chumash Indian people domesticated these already gentle and easy-going animals, and carried them in their tomols (canoes) to the three southern islands of Santa Catalina, San Nicolas and San Clemente. The Chumash kept these little foxes as pets and regarded them as a sacred animal and dream helper.

California Gray Foxes only weigh about 8 to 15 pounds, and they hunt primarily rodents and rabbits, and also some invertebrates. They also eat fruit, berries and vegetables when available, and have more plant material in their diet than virtually any other canines.

Gray Foxes are charming, likeable little creatures that help control rodent populations. I consider their ability to adapt to human activity, and their continued presence, as a blessing.