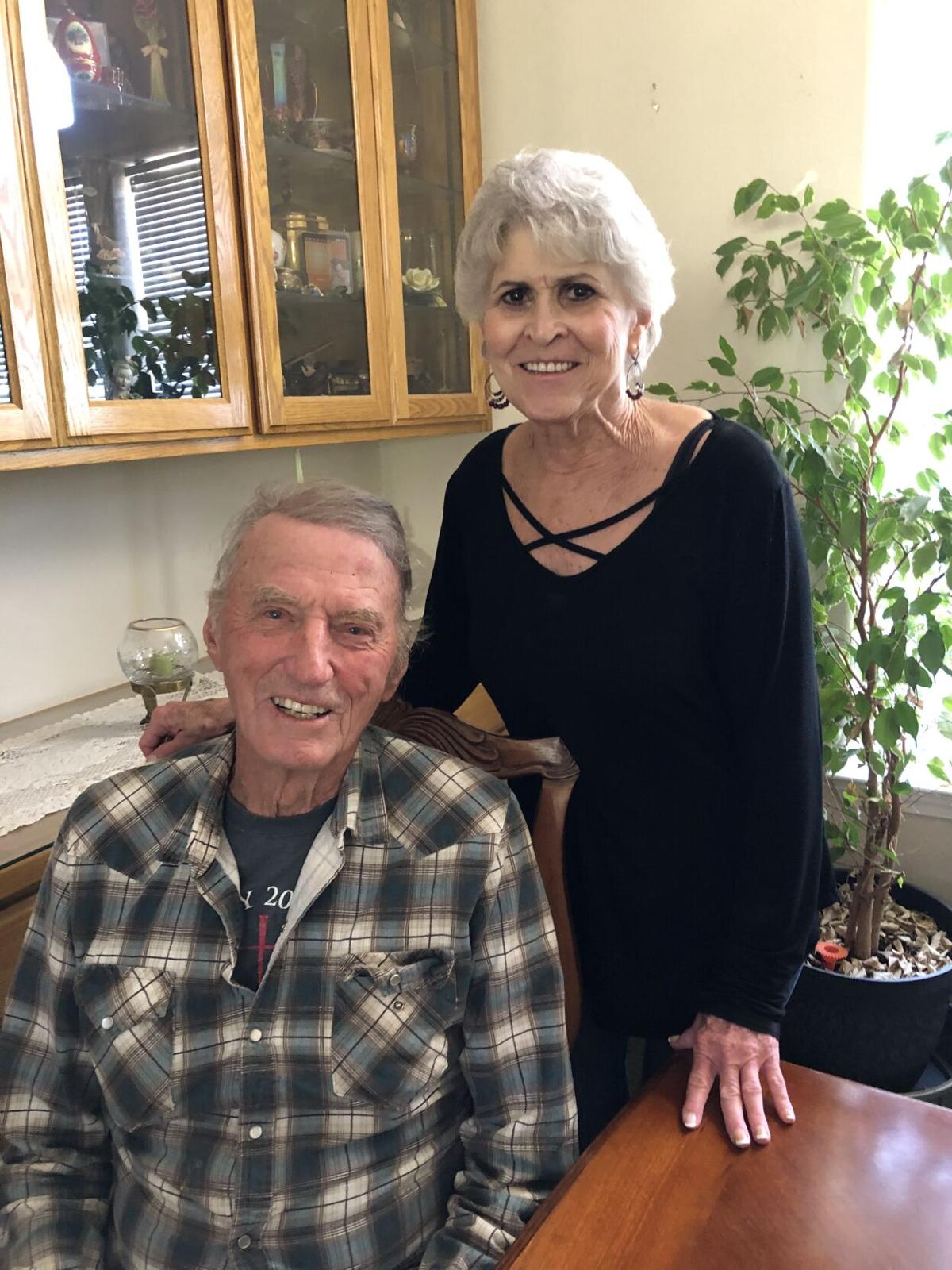 Hod Welden, who just turned 94, and his loving wife Jane. 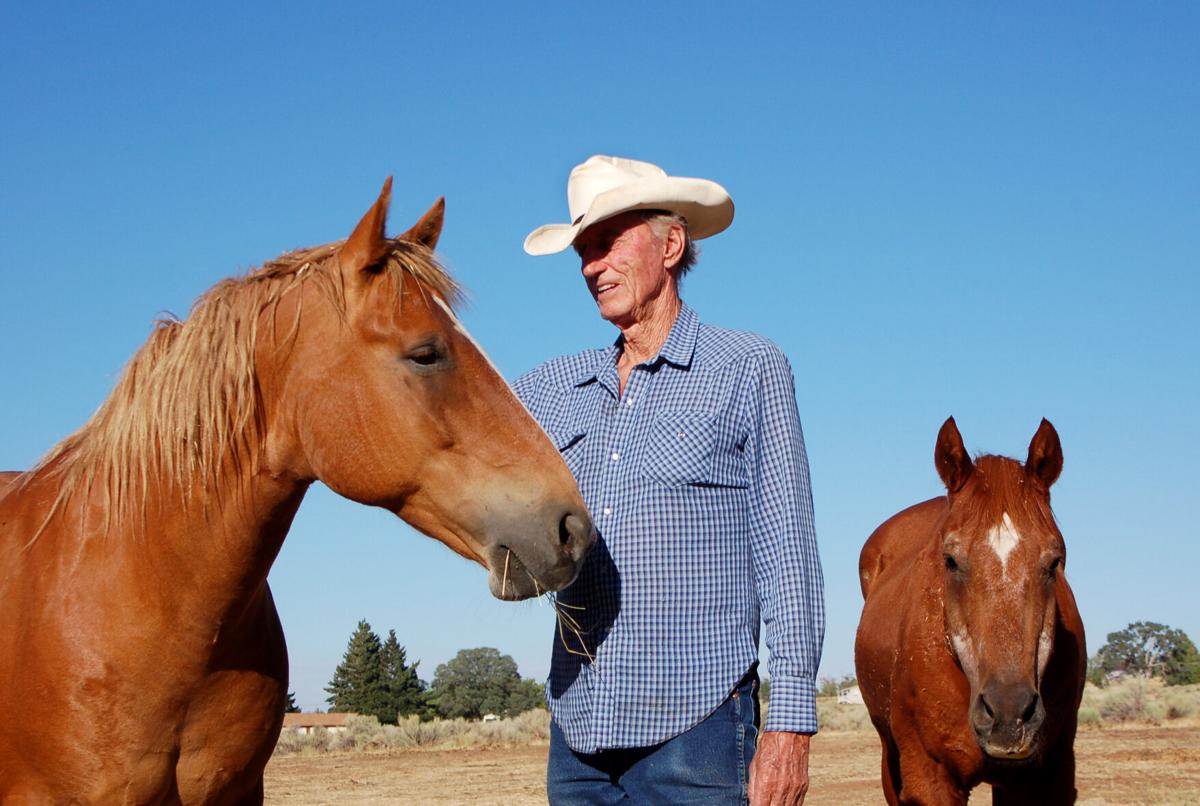 Hod Welden hasn't been without one or more horses for more than 65 years. 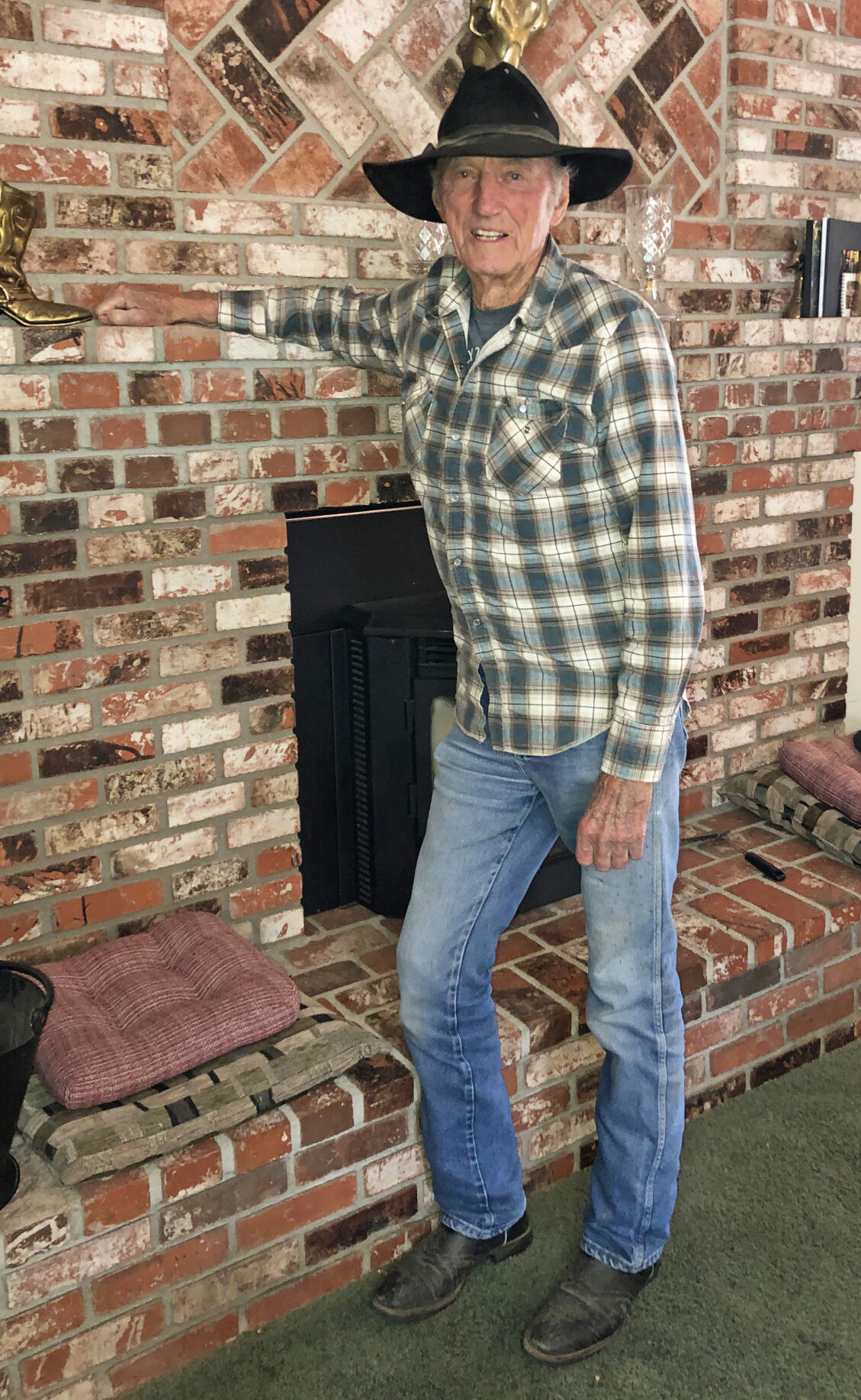 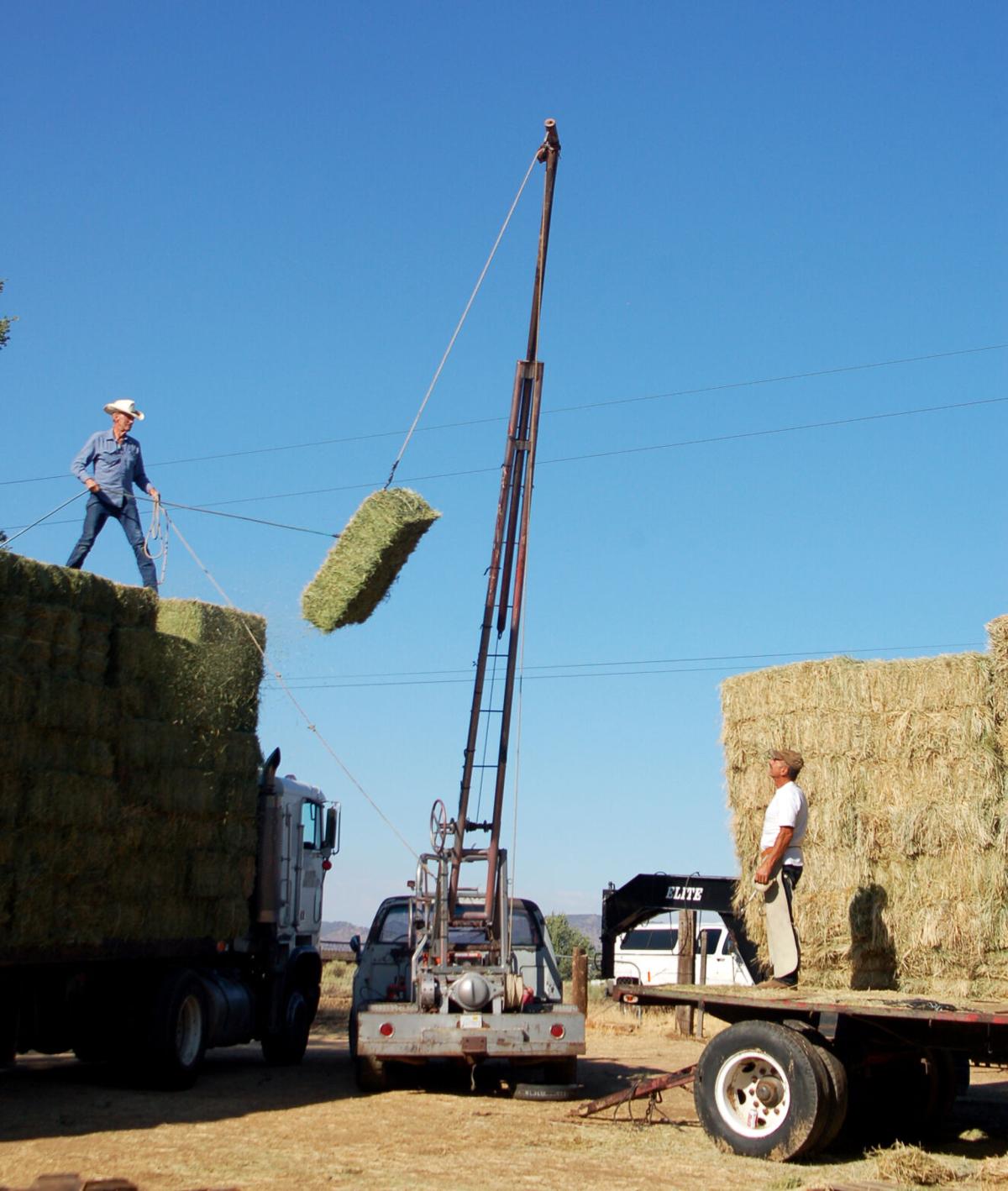 Hod hooks bales and lowers them to his son Cody in a photo I took when he was 86. 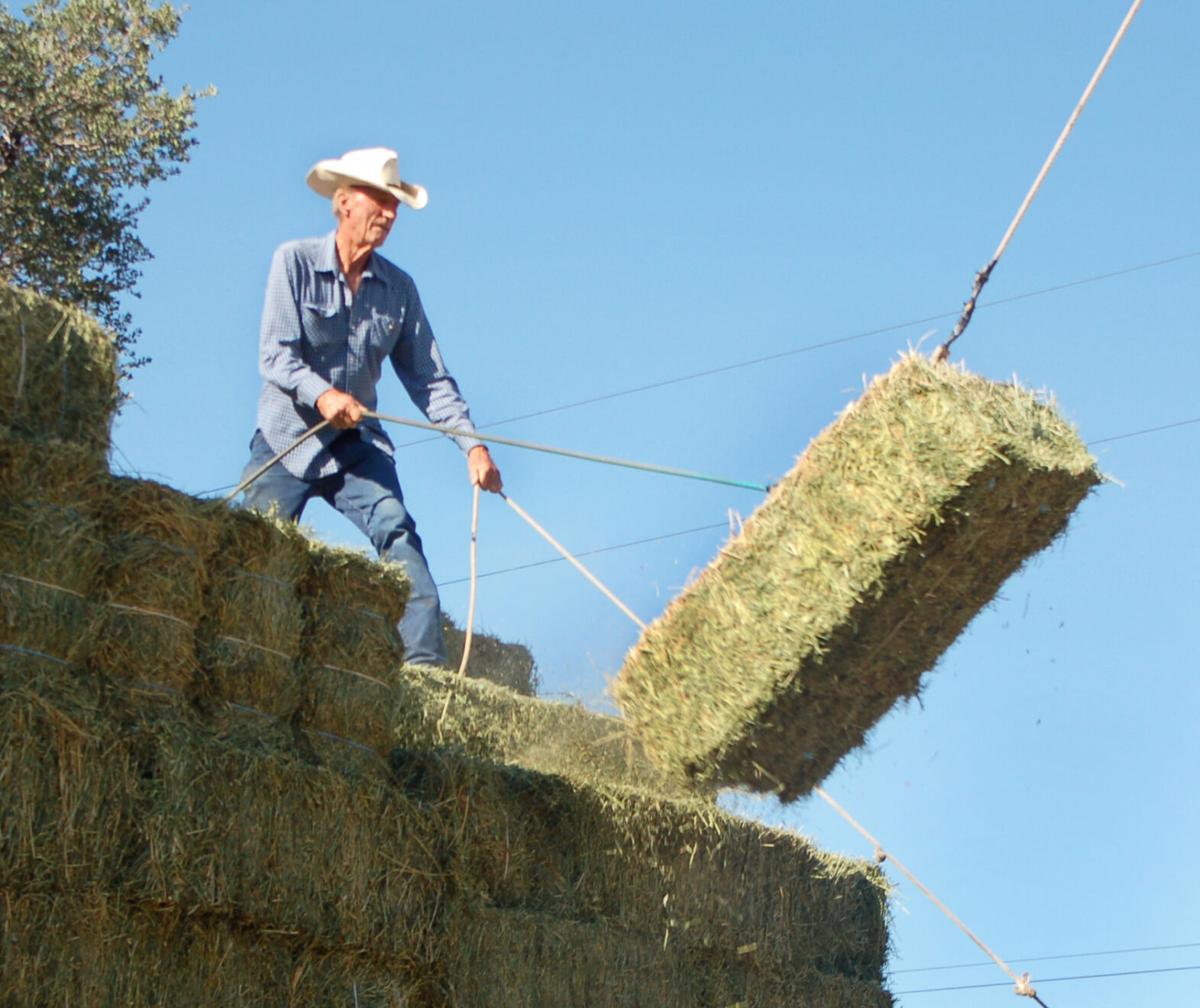 Hod shown still bucking hay bales at 86 year old. He can handle a bale of hay to this day. 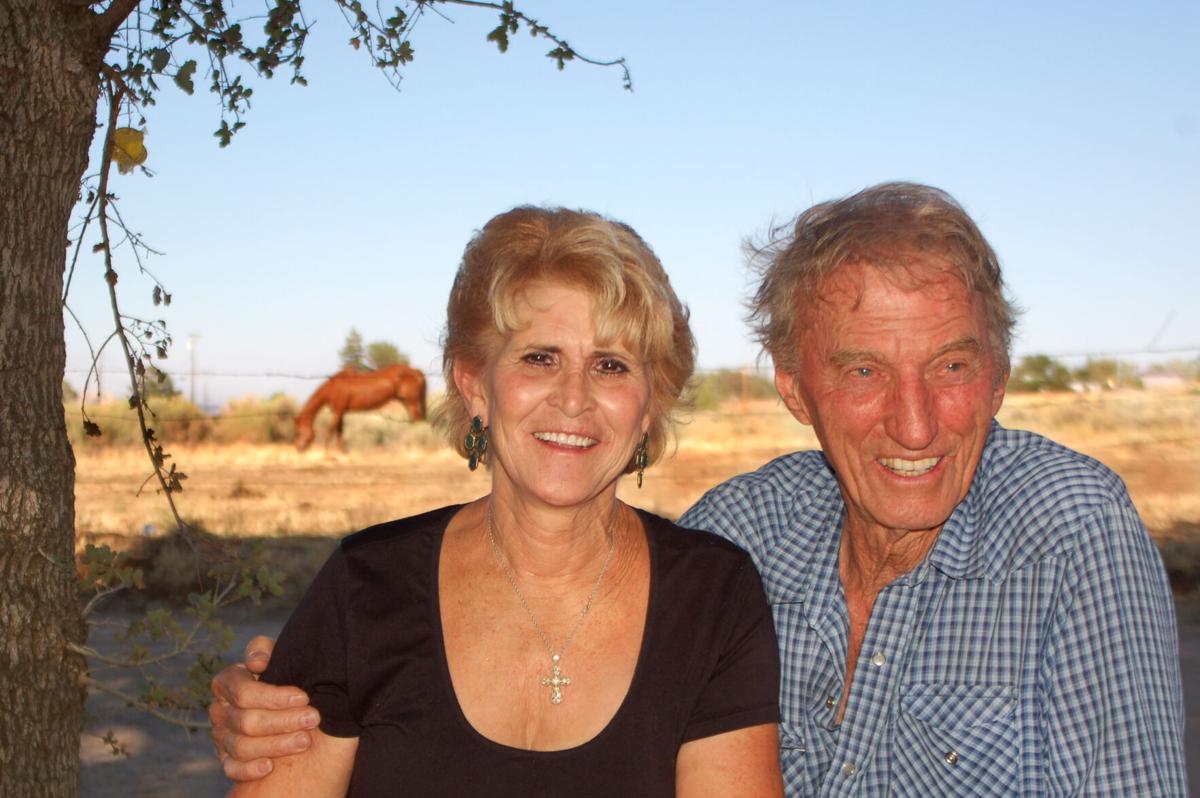 Jane and Hod Welden are a "Happily Ever After" couple.

Hod Welden, who just turned 94, and his loving wife Jane.

Hod Welden hasn't been without one or more horses for more than 65 years.

Hod hooks bales and lowers them to his son Cody in a photo I took when he was 86.

Hod shown still bucking hay bales at 86 year old. He can handle a bale of hay to this day.

Jane and Hod Welden are a "Happily Ever After" couple.

One of Tehachapi's most remarkable people passed a milestone last week when Hod Welden celebrated his 94th birthday in Stallion Springs. Hod is a tall, tough, good-looking horseman who started one of Tehachapi's oldest business, Tehachapi Hay Company back in 1966.

Hod's birthday was celebrated by a surprise birthday parade, the kind that arose from pandemic quarantining and social distancing. About 40 trucks came by Hod's house, with members of the 5150 club and Veterans of Foreign Wars, and Hod was delighted with the surprise and the company, for he remains an active and robust man with a keen mind.

Hod was born on April 29, 1927 to Howard and Linea Anna Welden, and he and his brother Garwood were raised in the small town of Titusville, Penn., where the world's first commercial oil well was successfully drilled in 1859. The Weldens lived and worked on a big dairy farm, where Howard was a gardener for the wealthy family that owned the dairy. "We raised most of our own food, and from the time my brother and I were 5 or 6 years old, we would be working in the garden," Hod recalls, "We'd do weeding and pick vegetables in the morning, and then we could go play in the afternoon. I really had a wonderful childhood. We didn't have many material possessions but we were happy."

World War II was nearing a conclusion in 1945, but Hod was drafted into the Marine Corp and spent a year in the service. "Before I went into the Marines, I had spent almost my whole life in Crawford County, where Titusville is located," Hod recalls, "I had never been more than 100 miles from home, and mostly a lot closer than that."

Hod's life took a big change when he got out of the Marines: his parents split up, Hod, Garwood and their mother moved to Southern California in 1947. So many former GIs had opted to move to California after the war that housing was simply not available. "At first the only place we could find to stay was a dingy little hotel in Los Angeles — one room with one bed," Hod remembers. "We took turns using the bed during the six weeks we had to stay there." His mother eventually found a job in a dry cleaning plant in Beverly Hills and the family was able to move to an apartment where they had their own rooms.

Hod took a truck driving job with a company called Calcor, hauling materials for steel buildings and aircraft. Hod is what the oldtimers call "a tall drink of water," raw-boned with big hands, and at 190 pounds, he boxed as a heavyweight in Golden Gloves amateur boxing competition. He trained at the famed Main Street Gym in Downtown Los Angeles.

In 1951, Hod married Kay Appleberry and they moved to the city of San Fernando so that Hod could have a horse  — and he hasn't been without a horse (or sometimes many horses) since then. Hod and Kay had two sons, Kenny and Cody, and they later moved to some leased ranch property near the future Castaic Dam where they had up to 30 horses and 100 steers. Hod started the only licensed horse pack outfit in Los Angeles County, running a string of horses to take deer hunters into the mountains around Castaic and into the Padre Mountains each autumn. Hod injured his back and had to give up truck driving, and then when Castaic Dam was built, the ranch property would be flooded so the family had to move — and they chose Tehachapi.

"We came here in 1966, and went into Trusty's Cafe (now Kelcy's) on a Sunday morning," Hod recalled. "We saw an ad that Ed Tomkins had put in the Tehachapi News for a place west of town that had belonged to his father, 20 acres with a house and some outbuildings. As we drove up the dirt driveway in the back of Ed's car, I leaned over to Kay and whispered 'This is the one.' It had oak trees and was in a great location. It took every cent we could scrape up for the down payment but we did it. Ed carried the paper and we made payments to him." Now Highway 202 runs right past the Welden place, which is located a little south of Schout Road on the east side of the highway, but in those days there was no 202 and very few neighbors.

Hod didn't have a job, but he did own a 1 and 1/2-ton bobtail truck, and a friend in Agua Dulce told Hod that he needed some oat hay. In those days, James Franklin was raising grain hay out on Dennison Road and storing the hay in the old Sullivan barn, which was located on Dennison Road across from the new high school (it was dismantled several years ago). Hod went out and introduced himself to James, who became a lifelong friend, and made arrangements to get a load of the hay at a price of $26 a ton, which worked out to about $1.60 a bale. Hod delivered it to his friend in Agua Dulce, and a neighbor saw it and wanted some so Hod delivered another load, and soon he was in business as the Tehachapi Hay Company.

When James Franklin ran out of hay, Hod went out to Cummings Valley were Bill Porter was raising about 160 acres of alfalfa. "I told Bill that I didn't have any money, but if you'll trust me for a load of hay, I'll pay you back when I come for the next load," Hod said. The arrangement worked fine, and before too long Hod had made enough money that he could pay for the hay up front. Bill Porter became another friend for the rest of Porter's life. Hod was mostly hauling hay from Tehachapi to other areas — there weren't too many people with horses in the Tehachapi area, and those that did bought their hay locally themselves. When he had sold all of Porter's alfalfa for the year, Hod started making friends with alfalfa ranchers in the Lancaster area, paying about $30 a ton for number 1 alfalfa hay.

When he had taken care of all the customers he had in the Agua Dulce area, Hod started hauling to people he knew from his years of living in San Fernando, and looking for more buyers. "I'd drive around, and when I saw a pair of ears sticking over a fence, I'd stop and knock on the door and ask if they needed any hay," Hod explained, "After a few years, I had enough customers and didn't have to do that anymore."

In 1971, tragedy struck Hod's life when his wife Kay suffered a stroke at their Tehachapi home and died shortly afterwards at the hospital. Hod helped cope with his loss by working, hauling hay five or six days a week and doing paperwork on his days off. "My Dad has always worked harder than any man I ever saw," his son Cody says, "He has always stayed busy." Kenny and Cody grew up helping their Dad in the hay business, and Cody also started working in construction when he was just 14. Grief struck Hod again when Kenny died in a car accident in 1977 when he was only 23 years old — the driver fell asleep and the car crashed, killing two of the three occupants.

Hod kept up his hay business as the years rolled by, buying a Freightliner diesel tractor and a set of doubles in 1978. Hay was getting harder to find in the Antelope Valley, so in the early 1980s Hod began buying hay from Larry and Elaine Mead in Inyokern. "The Meads raised the best hay in the whole country," Hod says, "I never got a bad bale from them. In the mid 1990s they sold their place to a dairy that wanted the hay for themselves, so I had to find other sources." To diversify his income, Hod and Cody built a set of apartments in the Golden Hills area. When they were getting the carpet to put in the apartments, Hod went into Designers Interiors and was smitten by Jane Gibbons, the owner. She remembers that he came in to her shop in work clothes — a red flannel shirt, jeans with one leg tucked into his pants and a floppy hat, and said "Ma'am, I have a powerful hankerin' to take you out to dinner if you ain't taken" She said yes, and they've been married for about 30 years. They both said to me once, in accidental unison, that "We got married and 'Happily Ever After' came true for us."

Hod and Jane are a team and are seldom apart. There was a time when they had been dating just a short time and Hod asked her "Do you like to paint?" Jane responded "I love to paint!" as she thought of sitting at an easel, putting art on a canvas. Hod was thinking about walls, not canvases, however, and he was wanting her to help paint at the apartments, which she has done many times since then.

"Life has for the most part been a wonderful adventure and I have been truly blessed by so many wonderful people," Hod has said to me. "My youngest son Cody is all that is left of my first family. He is a well-known contractor in Tehachapi and has given me six beautiful grandchildren, and I love him. Thirty-four years ago I met and fell big time for the beautiful Jane Gibbons. She is now Jane Welden and she made my life complete again. In addition to all the happiness she has brought me, she has given me a talented daughter in Donna Franks and a son Paul Gibbons, who is a Kern County fireman. I love them both, and I thank Jesus for all. I am truly blessed."

Hod loves his family, his life and his home in Tehachapi Mountains. He bears a resemblance to actor Clint Eastwood, and has been asked for his autograph more than once as a result, but Hod is no actor — he is thoroughly genuine, honest and kind, and he is as good a man as has ever lived in the Tehachapi Mountains. Hod has been my friend since I was little kid, and I love and respect him dearly.