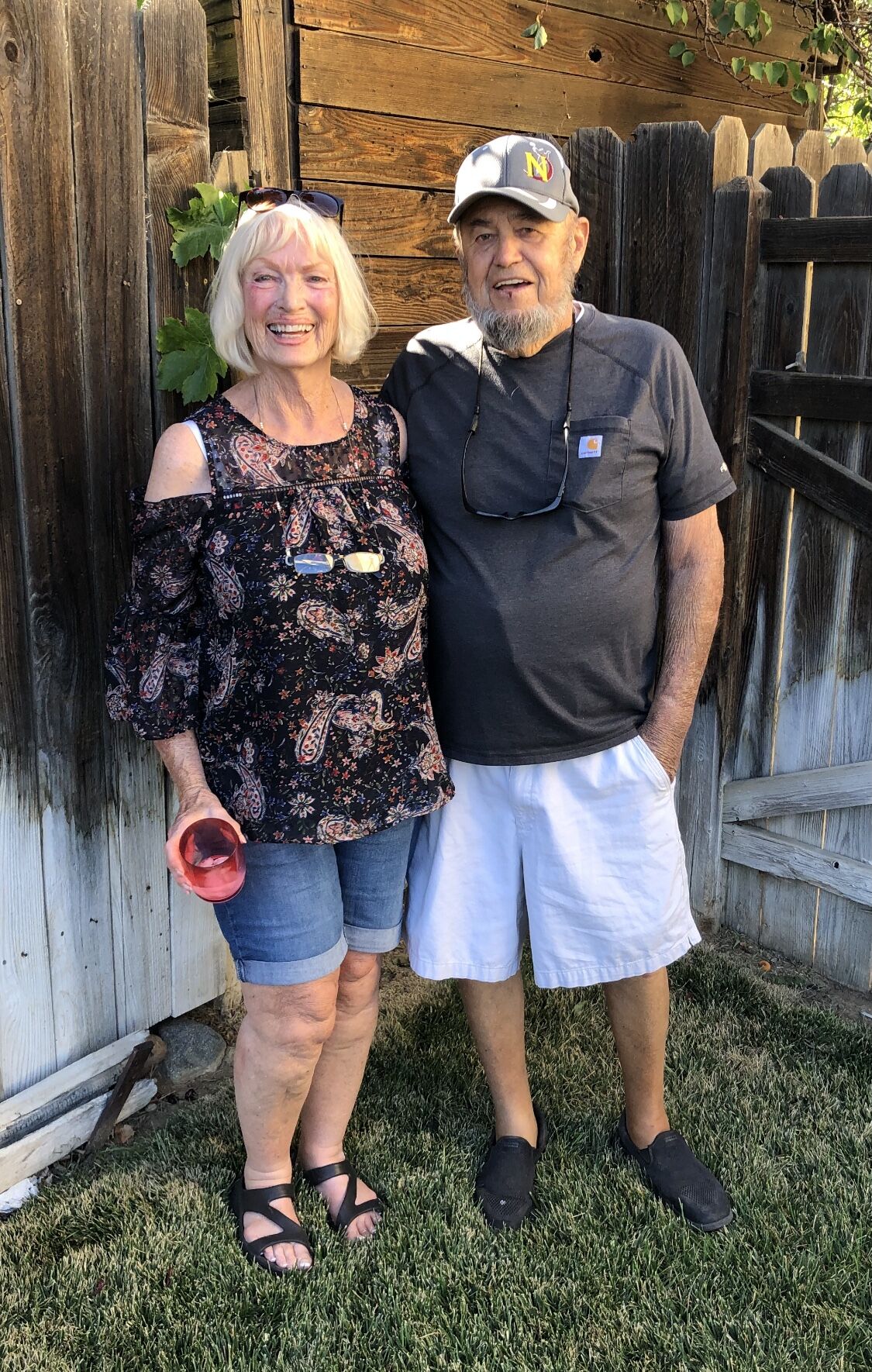 James and Karen Franklin outside their Tehachapi home of 50 years. 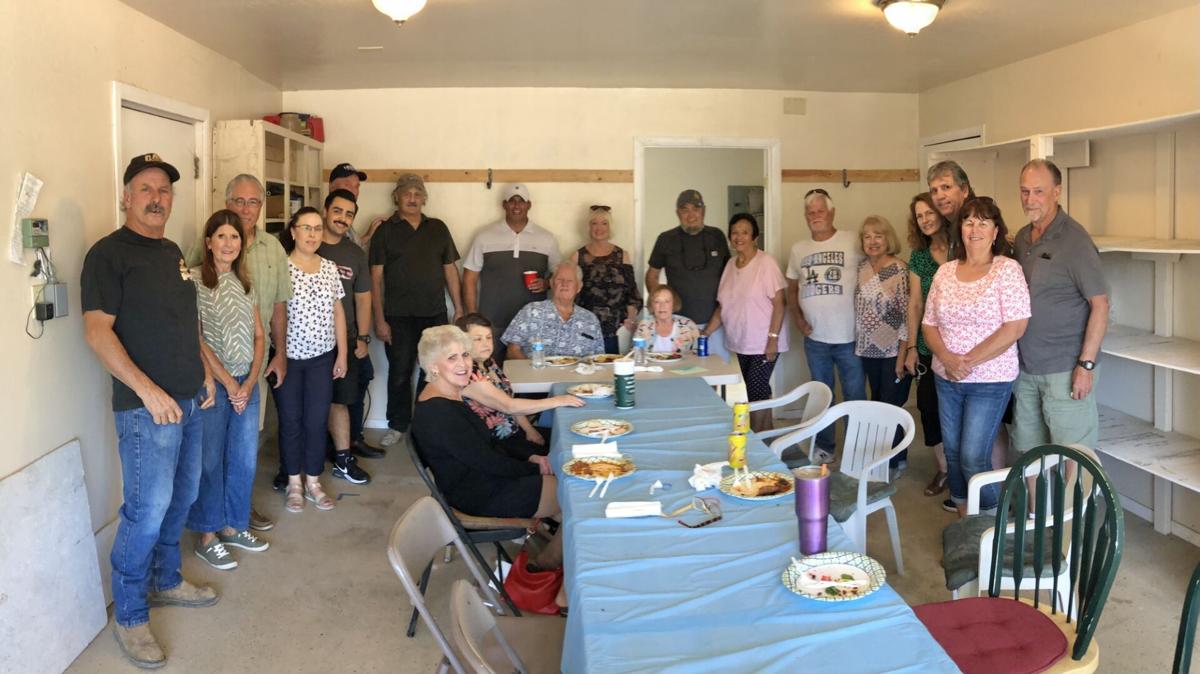 A group of friends and neighbors gathered recently to say goodbye to James and Karen Franklin, who are leaving Kern County for the Sacramento area. 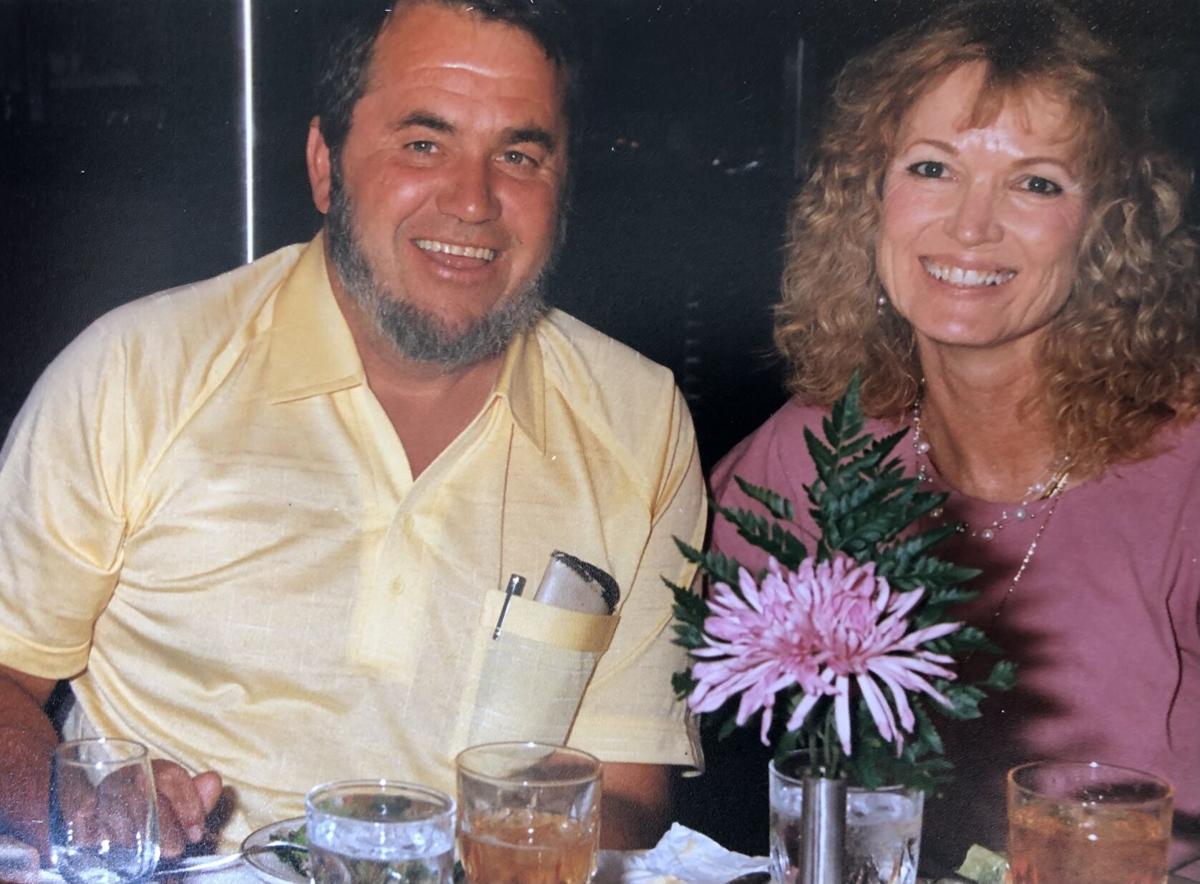 James and Karen at dinner while on a cruise in the 1990s. 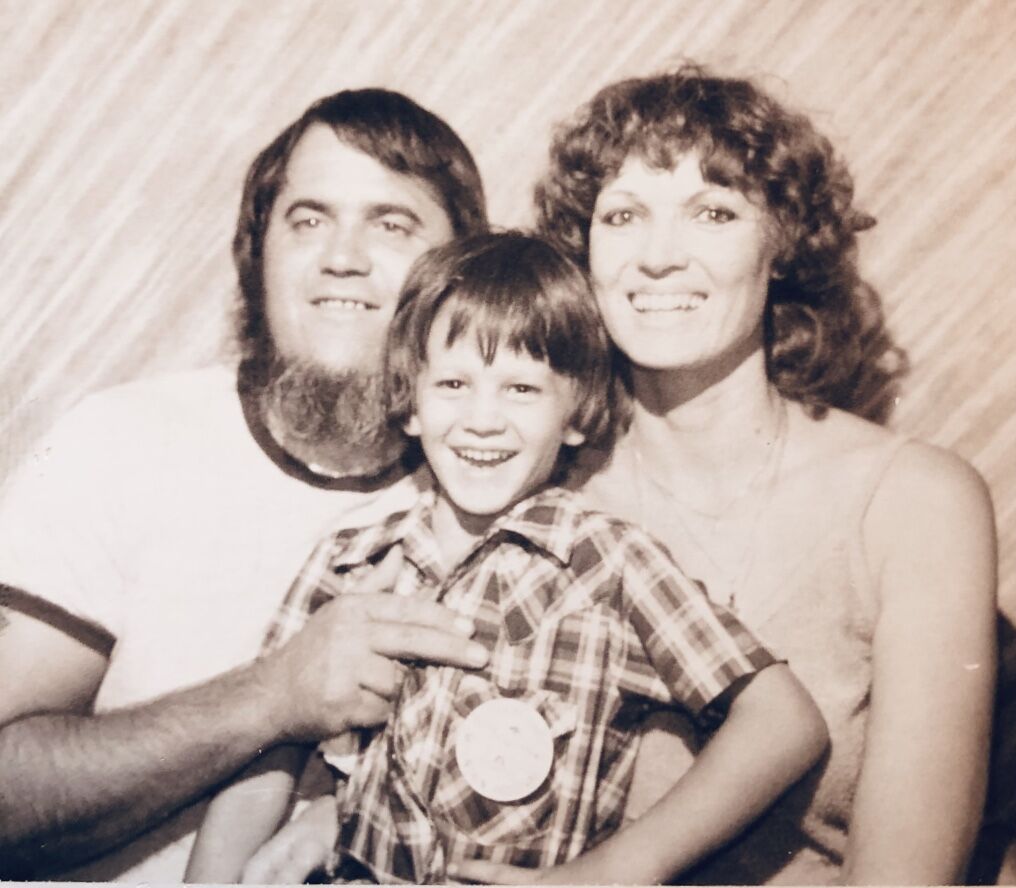 James and Karen Franklin and their son Ty, who was raised in Tehachapi. 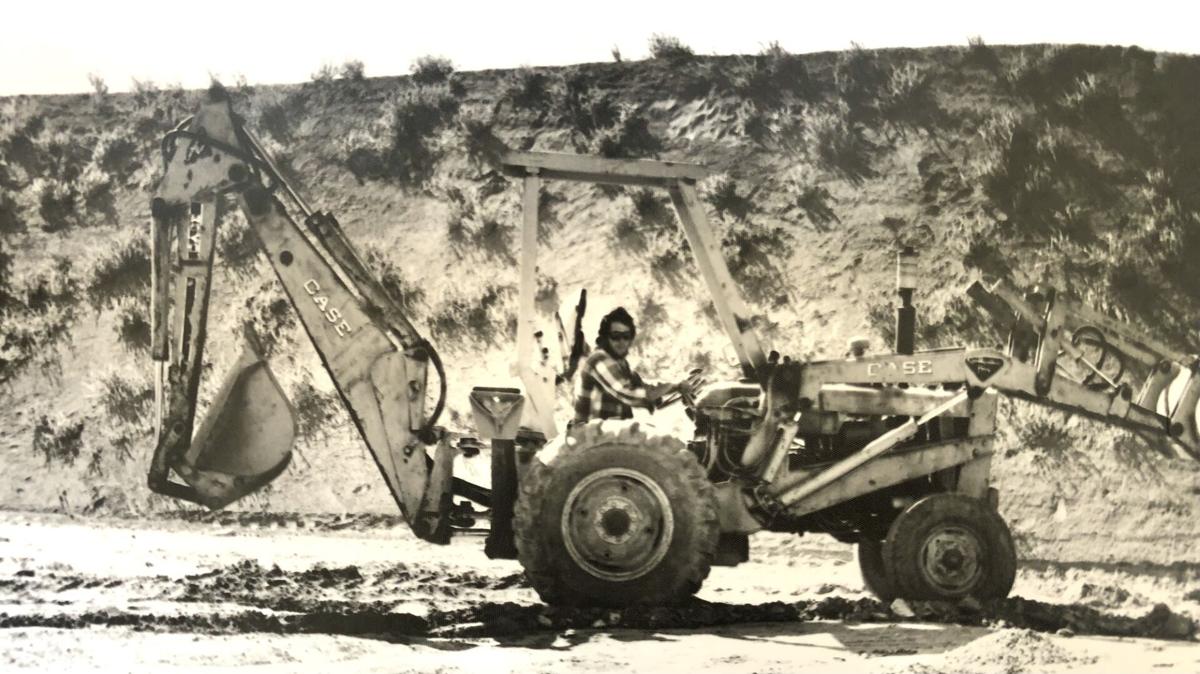 James Franklin driving a tractor with a backhoe and front end loader for the local water district.

James and Karen Franklin outside their Tehachapi home of 50 years.

A group of friends and neighbors gathered recently to say goodbye to James and Karen Franklin, who are leaving Kern County for the Sacramento area.

James and Karen at dinner while on a cruise in the 1990s.

James and Karen Franklin and their son Ty, who was raised in Tehachapi.

James Franklin driving a tractor with a backhoe and front end loader for the local water district.

After half a century of living in Tehachapi, well-known local couple James and Karen Franklin are leaving the area to go live near their son in Citrus Heights, near Sacramento. James was a Tehachapi City Councilmember for six years, was a big supporter of Tehachapi Little League and was an active member of the community in different ways.

About 50 friends and neighbors dropped in and out during a recent going away party at the Franklins' home on Brentwood Street, where he and Karen have lived since they bought it in 1973.

James, 82, is a lifelong East Kern resident, and he first saw the light of day only 20 miles from Tehachapi when he was born in a little hospital in Mojave in 1939. The Mojave Hospital, like the Tehachapi Hospital, was owned and operated by Drs. Harold and Madge Schlotthauer.

James was one of three children born to Jolly and Sarah Franklin. The Franklin family had moved to the Mojave area so that Jolly could work as a gold and silver miner, and the family lived outside of town in place called Reefer City. This was a cluster of old refrigerated railroad cars near Soledad Mountain that had been converted into employee housing for mining families. During their working life, the cars had been cooled with blocks of ice and used to ship California produce back East.

The Franklins later owned several different cafes in Mojave and the surrounding area, including Mac's Diner in Mojave. James grew up liking to drive cars, trucks and heavy equipment, and he came up to Tehachapi to work for a earth-moving contractor named Bill Mills.

Behind the wheel of assorted tractors, graders, dozers and other equipment, James built roads and prepared lots throughout the area, including at California City, where there are hundreds of miles of roads.

James eventually started his own earth-moving business, Franklin Engineering, which had a yard at Mojave Airport. The highly regarded Dan Sabovitch, the airport manager who led the effort to turn Mojave Airport from an old surplus military airport into the powerhouse that it is today, was a friend of James and encouraged him to locate his business there.

It was in 1973 that James and Karen were married. Both were divorced and had two children each, and then they had a son together, so their family was a classic case of "yours, mine and ours" when it came to their kids. James had son and daughter Keith and Kirsten, and Karen had Johnny and Martin Rollin. Together they had son Ty, who was raised in Tehachapi with his older brothers Johnny and Martin, and is now a CHP officer.

In addition to his land construction, James also tried his hand at dry farming in the Tehachapi area and raised barley hay for a few years. As I can attest firsthand, dryland farming in Tehachapi can be impossible when the rains don't fall at the right times, if at all, and James was not tempted to trade his year-round earth-moving business for seasonal hay farming.

In the late 1960s, James had already baled hay one summer when a man named Hod Welden, who owned a truck, came out and introduced himself and bought a load of hay. Hod took it to Agua Dulce and sold it to horse owners, and in that way found himself in business as Tehachapi Hay Company.

Believe it or not, Tehachapi Hay Company is still in business more than 50 year later, now run by Hod's son Cody, and Hod, his wife Jane, daughter Donna and Cody were all at the Franklins' going away party on Aug. 6. Hod is now 94 years old; I featured him in a recent column. The next morning after the party he was going to go help Cody unload a shipment of hay.

In later years, James closed down his business and went to work as an equipment operator for the Tehachapi-Cummings County Water District, when Bob Jasper was still the manager of TCCWD. He helped build water control structures and maintain the district's assorted water infrastructure.

After he retired from the water district and Karen retired as an accounting supervisor for CCI, they would travel in their RV, spending winters in Mexico or along the Colorado River. James had a life-threatening health challenge when his kidneys failed and he received a kidney transplant in 2017. That gave him a new lease on life, though unfortunately the donor kidney failed after a year and a half.

So now he relies on kidneys dialysis, but James says that he and Karen are still able to travel and lead a mostly normal life, though James has lived his life as an energetic man, and now he doesn't have as much energy as he did.

My brother George, who has been friends with the Franklins for years and organized their going away party, said that "Though he sometimes has a gruff veneer, James has a good heart, a great sense of humor and genuine devotion to his family. We're going to sincerely miss his funny wisecracks and warm laughter! The Franklins are good people."

For their part, James and Karen are going to miss their longtime home. "It's been wonderful living in Tehachapi," they told me together. "The three boys had great schooling and a great childhood here, and we've loved our life here. We're very glad that we made our home in Tehachapi. We're going to miss it."

Good luck, James and Karen, and thanks for contributing to the fabric of this community for many, many years.