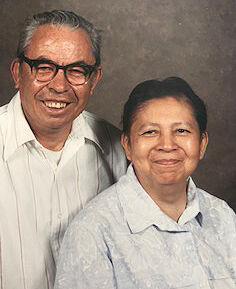 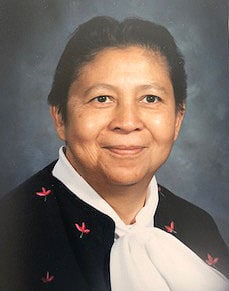 A sweet and gentle woman who was familiar to generations of Tehachapi residents recently left our valley forever with the passing of Jennie Corral, 87, on May 18. This diminutive lady was a powerhouse of activity and a person of great faith who was one of the most dedicated members of St. Malachy's Catholic Church for more than 50 years.

Jennie could often be seen walking from her home in Downtown Tehachapi to the nearby church, in all seasons. She was a very humble person who did not like the spotlight, and preferred to help behind the scenes.

Jennie was born on Feb. 5, 1933, and grew up in the small coal mining town of Madrid, N.M. She was a devoted student and graduated at the top of her high school class, and was offered a scholarship to NMU, but turned it down to work in the offices of the local coal mining company. She was the oldest child in her family, so she worked to help provide more income for her family.

It was while working at the coal company that Jennie met her future husband, Romulo. He had stopped in Madrid because he heard there was work, and he met Jennie. She didn't like him at first, but Romulo eventually won her over, though she was skeptical and didn't make it easy for him. He always would say she was worth it, though. They were married for almost 50 years before Romulo's passing in 2003.

After marrying, Jennie and Romulo had three children — Juana, Manuel, and Isabel — and moved to Santa Fe, and then when work got hard to find, Romulo decided to take the family to California. He had been through Tehachapi before, and wanted to come back. It was in Tehachapi that their youngest child, my classmate Anna, was born.

After a couple of years of living in Tehachapi, Romulo found a house to buy, and Jennie agreed to buy it only because it was right behind where St. Malachy's was located at that time. A new St. Malachy's was eventually built on Mill Street, and the older church building was eventually converted into the Downtown Branch of Sierra National Bank, which later became Bank of the Sierra.

Jennie's life revolved around three things: her family, St. Malachy's, and helping her community. Her de facto expression was a warm and genuine smile, and this cheerful lady was a shining thread in the tapestry of Tehachapi life.

Jennie taught religious education classes at St. Malachy's for more than 50 years, and for decades she could be seen walking students from Wells Elementary School over to St. Malachy's after school for their catechism classes. If you went to Wells, as I did, it was well known that Jennie would walk all the children to catechism after school. On the way, they would stop at the Corral house, where Romulo would hand out candy "to give them strength." It became quite a swarm of students.

She also typed the church bulletin for 20 years, washed the church linens, cleaned the church, was the sacristan for all services at the church, and assisted with countless weddings, funerals and baptisms. Jennie was a woman whose faith drove everything she did and how she raised her children. Anna told me that her mother was never sad or pessimistic, she just trusted that everything was "God's will," even if it wasn't what we wanted, there was a purpose that we may not understand, but was God's design. She lived her faith and was always willing to help.

But Jennie's contributions weren't limited to St. Malachy's. She also volunteered for many teachers over the years at Wells Elementary, she worked in the cafeteria there, and also worked as an instructional aide, bilingual aide and special education aide.

Jennie also used her Spanish fluency to tutor ESL students, and when Tehachapi Hospital had a Spanish-speaking patient and no fluent Spanish speakers on duty, Jennie would hurry over from her house to provide free translation services. She also helped local families in need with clothing, food, housing, translation and help with citizenship papers.

Jennie was the oldest of five children, and outlived all her siblings. She loved growing up in the small town of Madrid, and would tell stories of her childhood and helping her grandfather. He was the caretaker of the local Catholic church, and worked at the small hotel in town. Jennie loved hiking in the mountains of that region of NM now called the Turquoise Trail, and would walk with family members from Madrid to Cerritos to visit relatives. Those formative years of her life made her feel right at home in the small town of Tehachapi, helping at the church and walking around town.

Despite her humble and modest nature, Jennie's many contributions were not overlooked and she was honored with both Tehachapi Citizen of the Year and Mother of the Year honors, and was also awarded the Benemerenti Medal by Pope John Paul II.

Jennie never needed anything fancy in life. She was happy to spend her time with her family, praying, helping at the church and elsewhere. Anna told me that her mother loved chocolate, McDonald's, and a good steak. In her later years she loved being in her tidy little home, watching her Hallmark movies — especially the Christmas ones.

In my mind I will always see Jennie Corral walking on the quiet streets of Downtown Tehachapi with a smile on her face, heading to her next task to help somewhere. She was a gem of a human being, and a dearly loved member of our community.