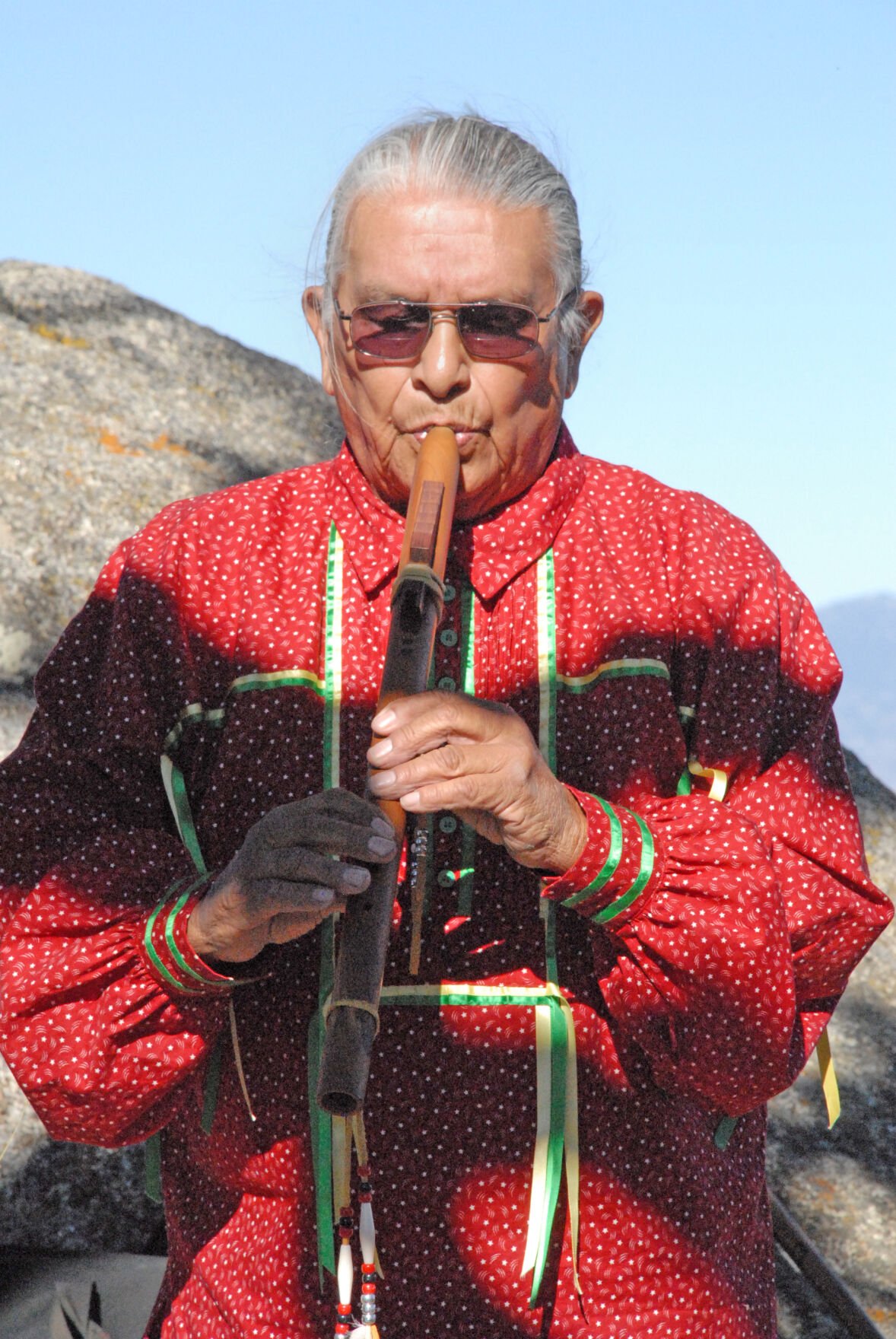 Nuwä elder Luther Girado plays a flute at the dedication of the Kawaiisu Historical Preserve on Bear Mountain. 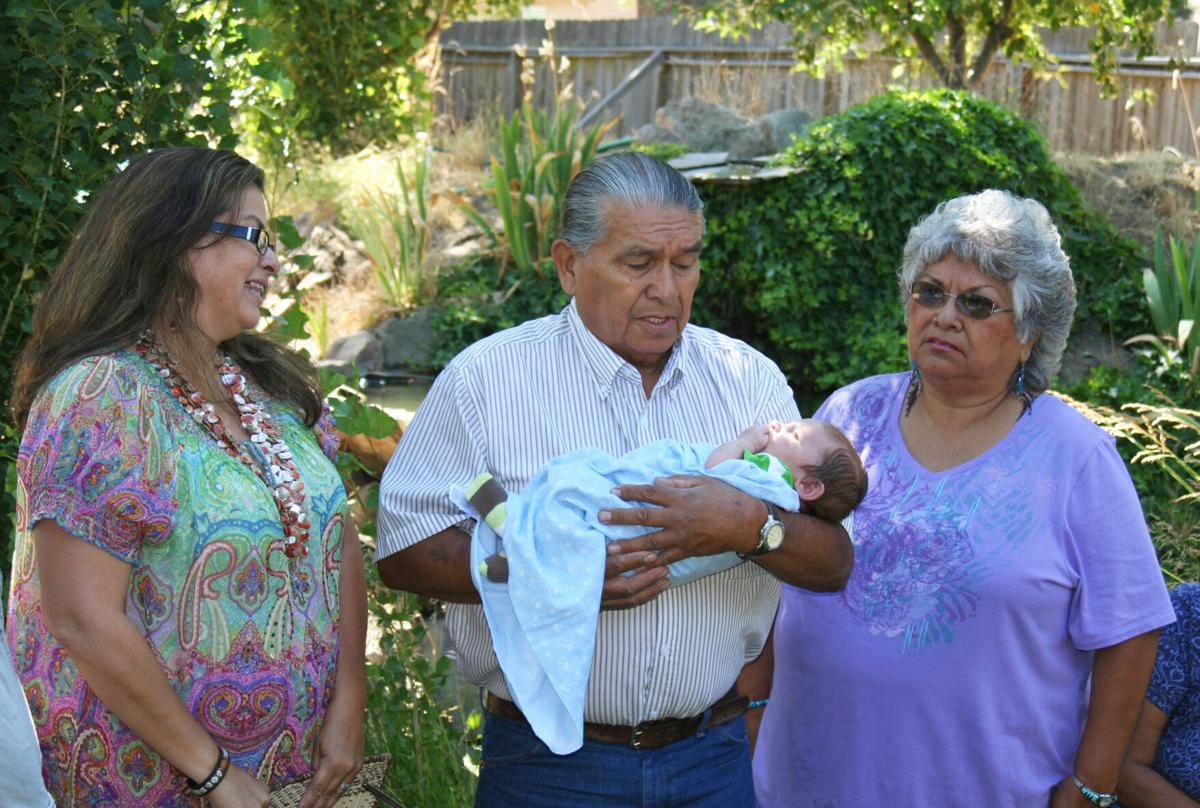 Luther Girado at a baby naming ceremony for his grandson Jacob. At left is Luther's daughter Julie Girado Turner and at right is his sister Lucille Girado Hicks. 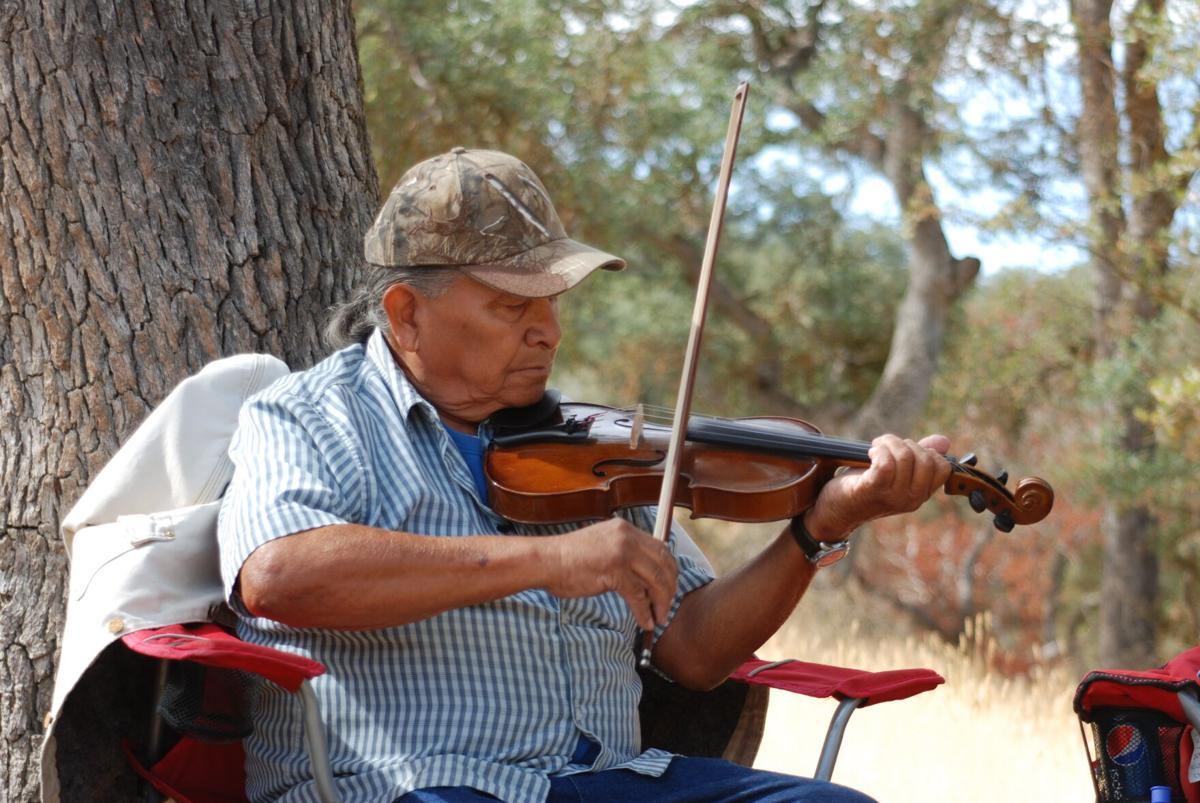 Luther playing his father's fiddle at a place called Woodchopper on the Rankin Ranch in Walker Basin, where the Girado family once lived in a cabin. 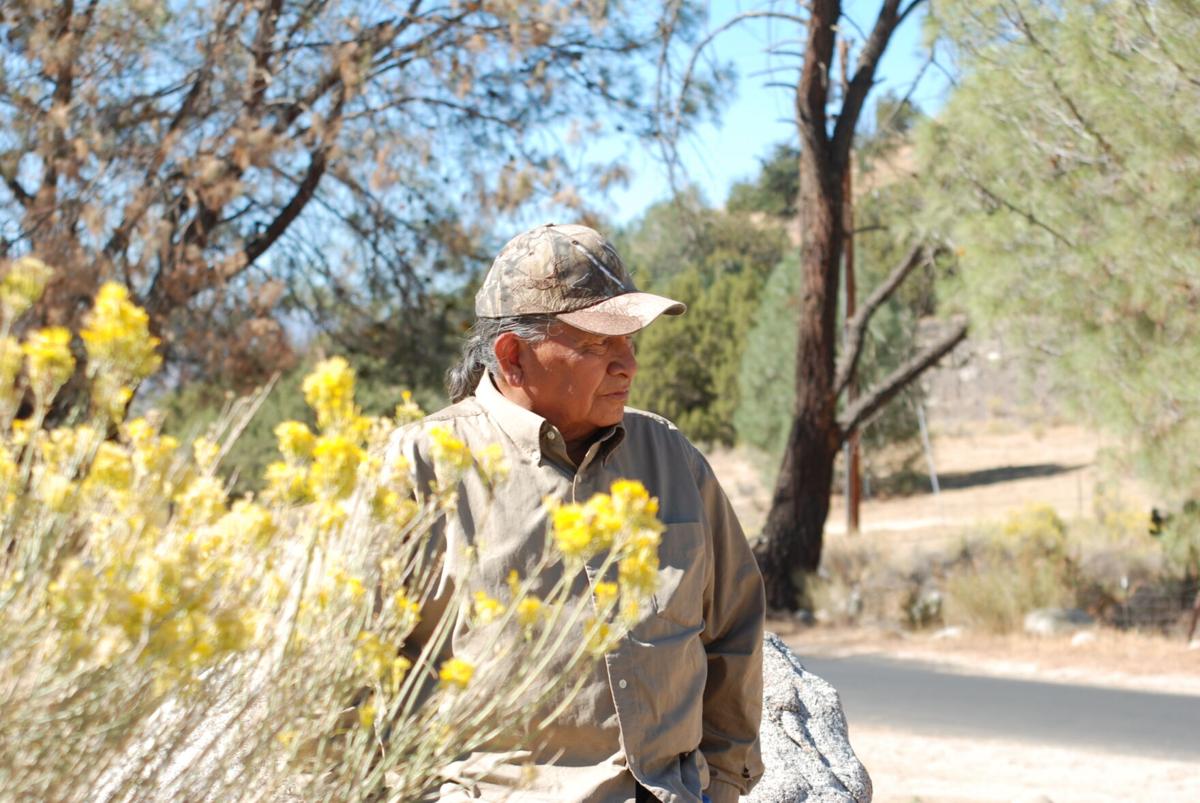 Luther Girado in the Tehachapi Mountains. 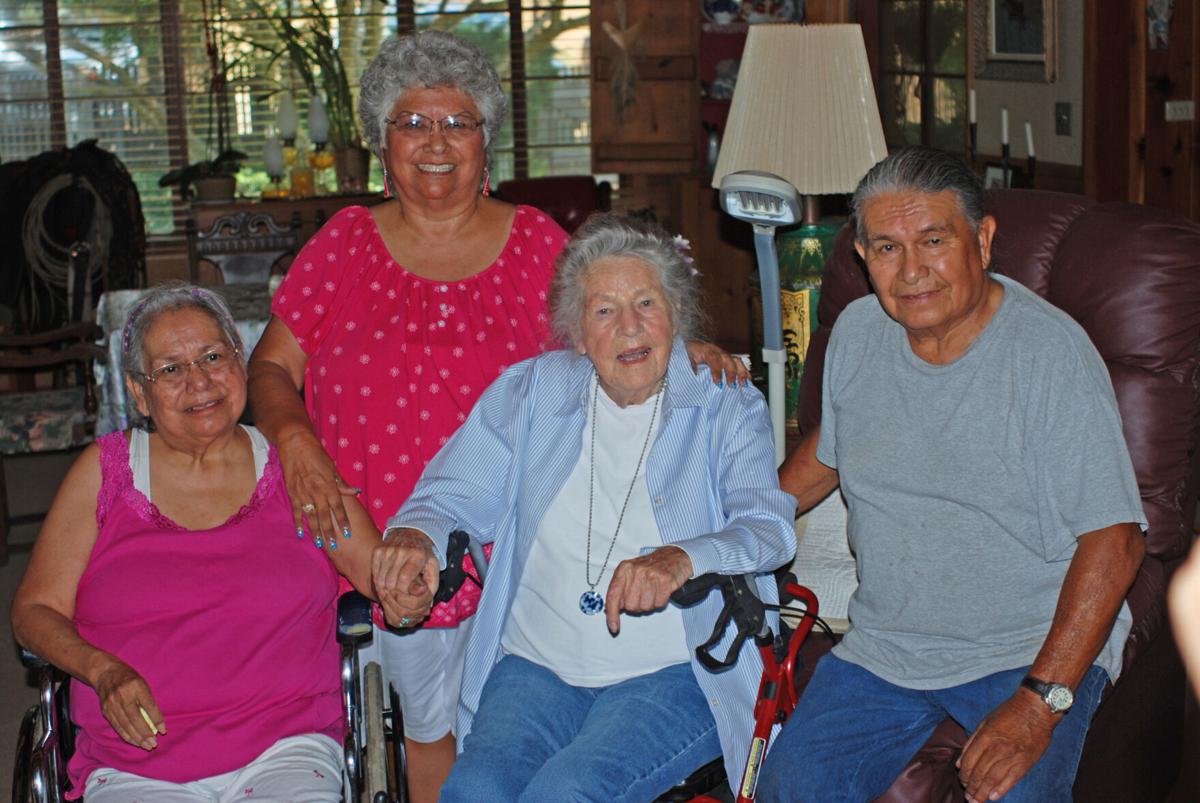 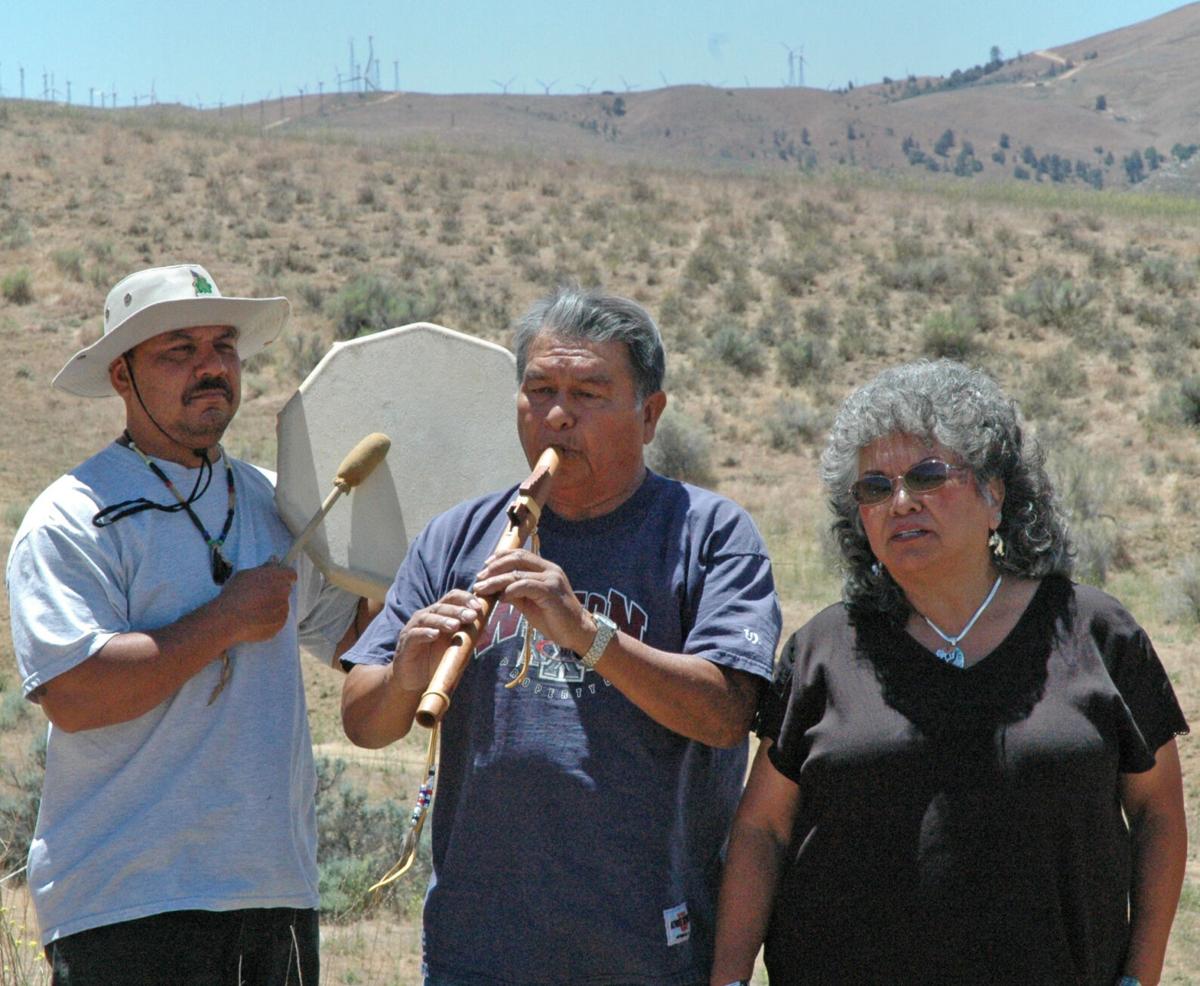 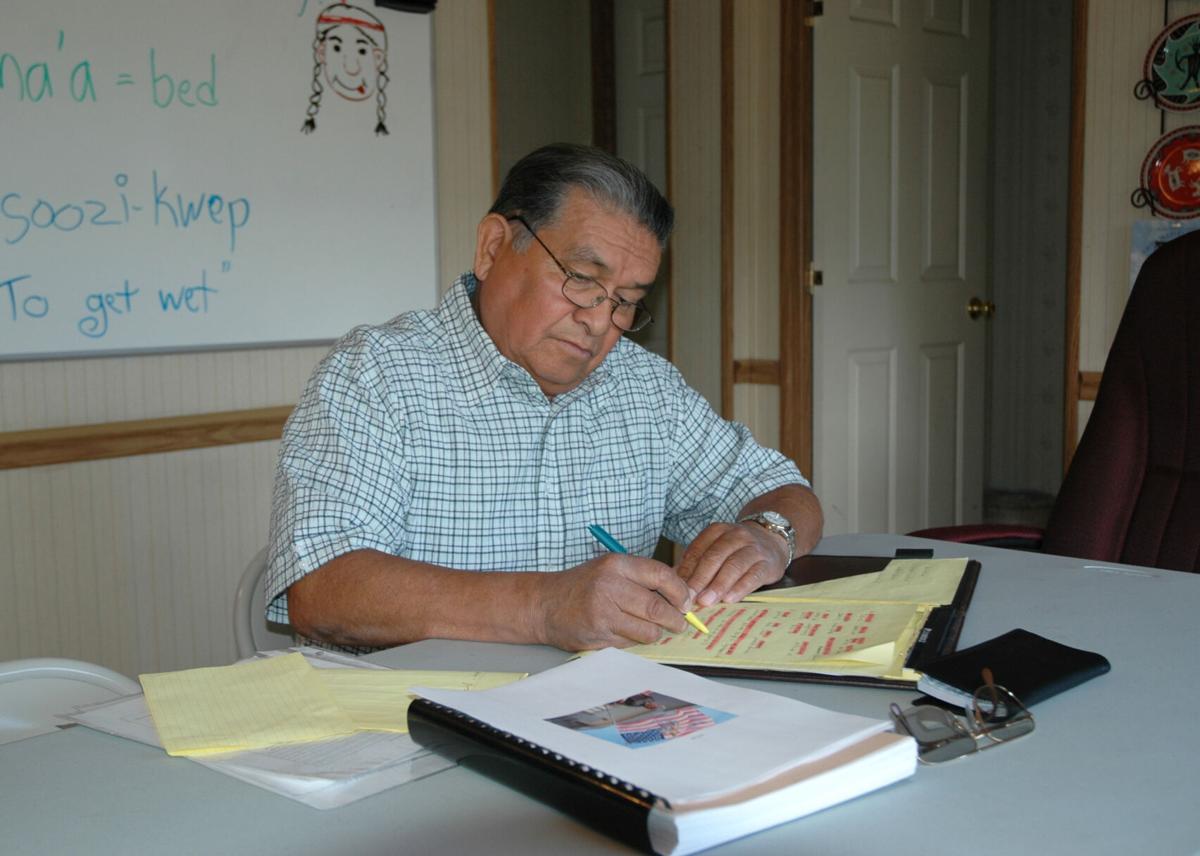 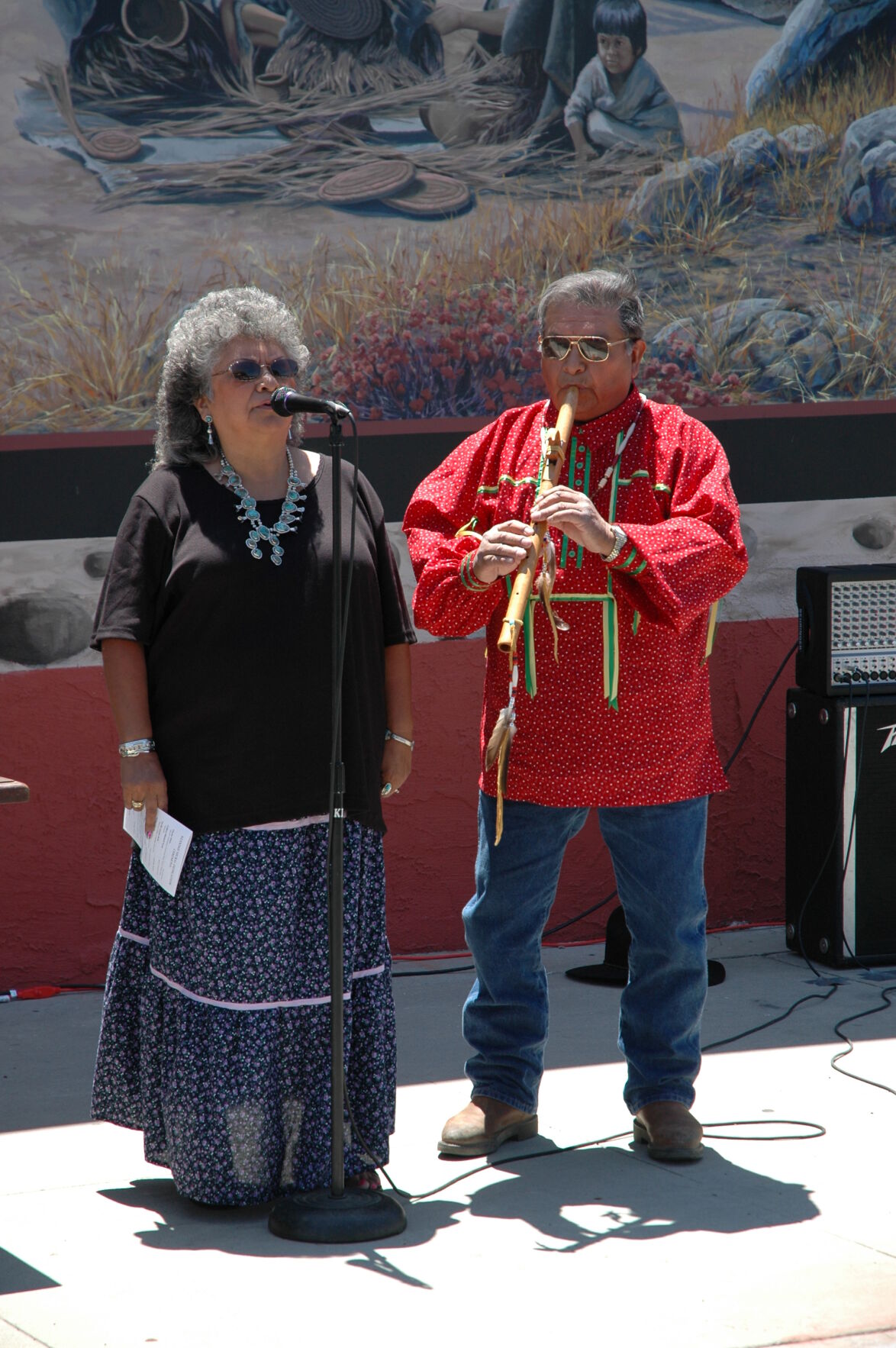 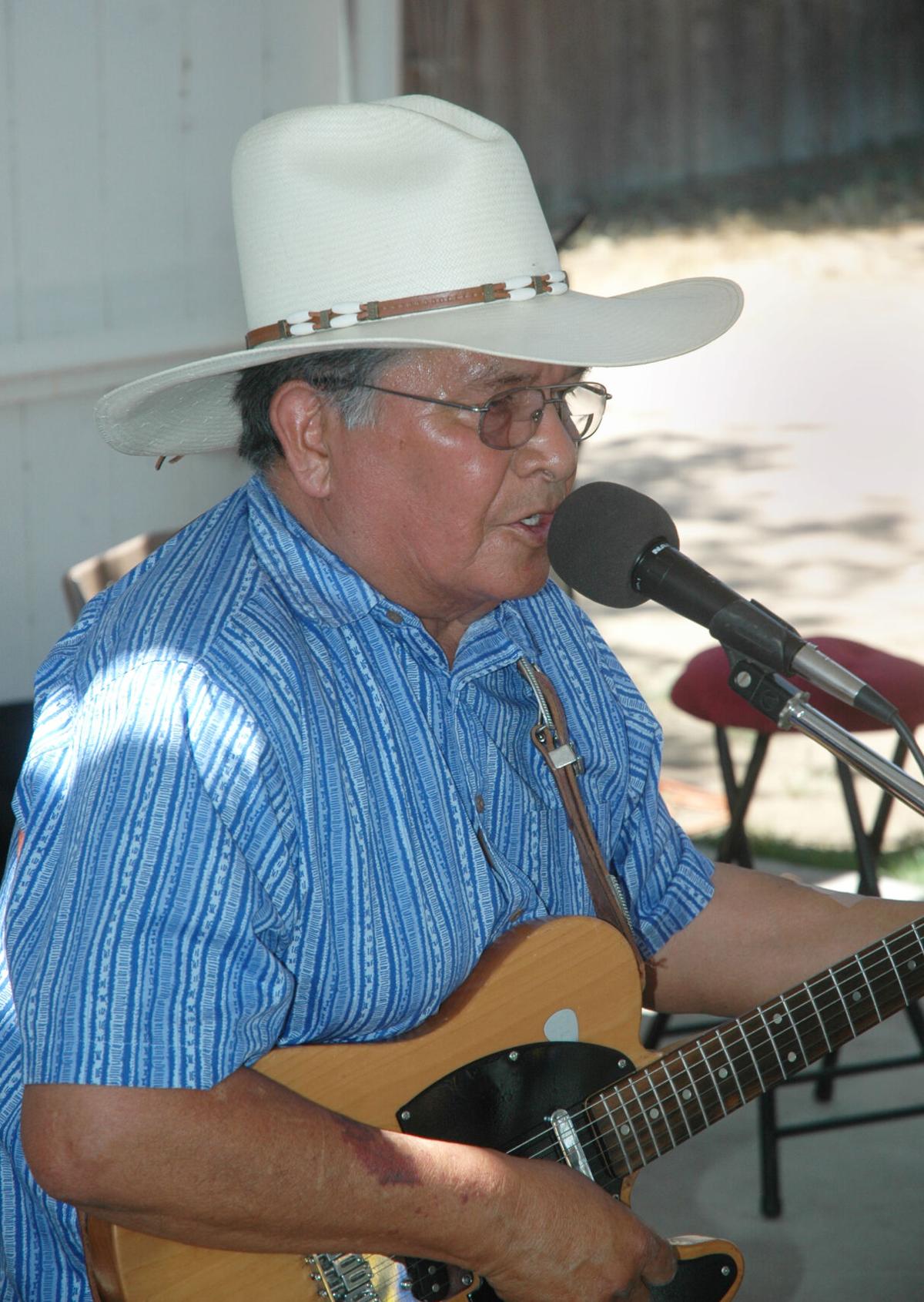 Luther playing guitar at a language program benefit in Bakersfield. 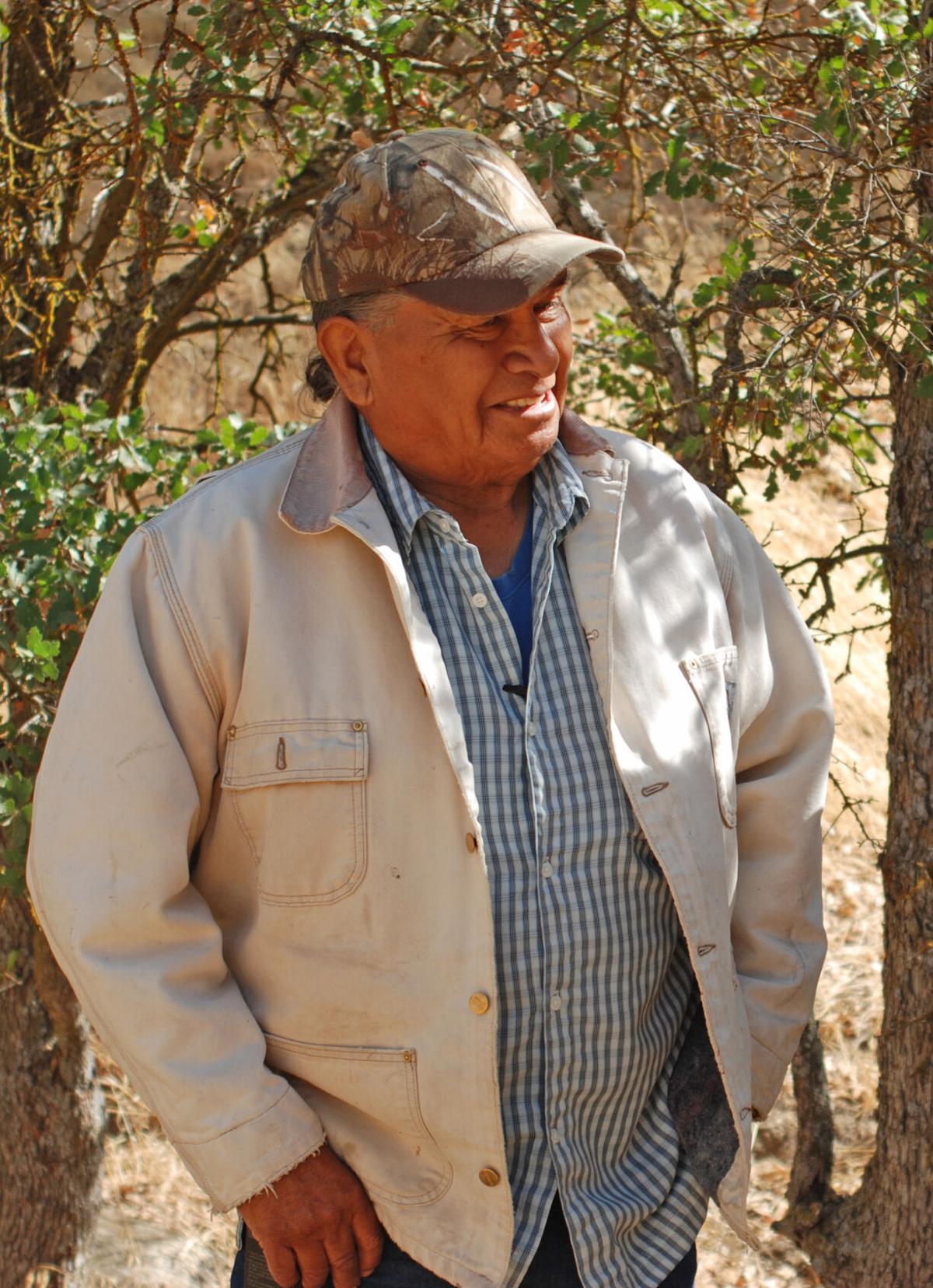 Luther had a great sense of humor and made people laugh in two different languages.

Nuwä elder Luther Girado plays a flute at the dedication of the Kawaiisu Historical Preserve on Bear Mountain.

Luther Girado at a baby naming ceremony for his grandson Jacob. At left is Luther's daughter Julie Girado Turner and at right is his sister Lucille Girado Hicks.

Luther playing his father's fiddle at a place called Woodchopper on the Rankin Ranch in Walker Basin, where the Girado family once lived in a cabin.

Luther Girado in the Tehachapi Mountains.

Luther playing guitar at a language program benefit in Bakersfield.

Luther had a great sense of humor and made people laugh in two different languages.

Luther Girado, the last male Native speaker of the Nuwä Indian language, went to meet his ancestors on Feb. 7. He was 79 and had been in declining health in recent months, and was in a Bakersfield hospital at the time of his passing.

Luther was universally respected and admired, both in the Native community and in the wider world. He had complete language fluency as well as cultural knowledge, and he had spent the past 20 years sharing the ancient language and lifeways of the Nuwä (Kawaiisu or Pauite) people.

Luther and his two siblings, Lucille Girado Hicks and Betty Girado Hernandez, were raised in an Indian cabin in the Piute Mountains of Kern County, with Nuwä as their first language. They didn't learn English until they started school in Twin Oaks, in the historic building that now houses the Twin Oaks General Store.

The Girados never lost their language fluency, and in 2002 they began a program to document and teach Nuwä. The Kawaiisu Language and Cultural Center is a nonprofit that was formed as a result of those efforts.

With help from a National Science Foundation grant, as well as other grant funding, the Nuwä team has recorded and videotaped hundreds of hours of dialogue, storytelling, childhood recollections, lessons and other speech in the Nuwä language. Thanks to the hard work of Luther, Lucille and Betty, there is now a wealth of language material and documentation widely available where there once was none.

Luther began life in a traditional way, born at home on March 26, 1941. His parents were Rafael and Gladys Girado, both Nuwä, the indigenous people of the Tehachapi Mountains. Luther's grandmother, Marie Girado, tattooed a small dark dot on baby Luther's forehead, a form of spiritual protection traditionally done with a cactus needle and ashes. Luther and his cousin Dorothy were the last Nuwä babies to have this mark placed on them.

During Luther's childhood, the Girados lived in a couple of different cabins. Rafael worked on ranches as a cowboy and ranch hand, and the family lived in very simple housing in the mountains, without electricity or running water. Water for drinking, cooking or bathing was hauled in buckets from a creek or a piped spring.

Even from the time he was a little boy, Luther helped daily with chores like hauling water, firewood or gathering traditional foods like kuuvuus (an edible spring wildflower), acorns, berries and pinyon pine nuts.

With his father gone at work most days, Luther helped around the house and as he got older, looked after his mother and sisters. Tragedy was harder to escape in those times, and two of the Girado siblings died as children — oldest daughter Viola died of an abscessed tooth and the youngest, Stanley, died of pneumonia.

The older Nuwä tribal members pronounced Luther's name as "Luta'a," and family members often called him Sonny. They were delighted to have a young person who spoke the language, and they told him things they didn't tell other Native children.

Luther and his family lived a life that straddled two worlds. At home, in a cabin among the blue oaks and gray pines near a willow-bordered creek, they spoke only Nuwä and ate many traditional foods. Their father hunted deer and rabbit, and every meal was accompanied by tortillas homemade daily over a wood-fired cookstove.

At school, the Girado children learned to speak English and taste sliced bread — they had white classmates who were eager to trade their sandwich for some of Gladys Girado's cooking.

Luther was shy in some respects, but the other boys at school quickly learned that the quiet Native boy was not going to get pushed around by anybody. As the children gathered outside the school for the flag salute one morning, a would-be bully found himself on the ground getting pounded by Luther. It was a lesson learned. Luther was tough and had a temper if riled, and he would use his fists if he thought he was being taken advantage of.

In 1960, when Luther was still a teenager, the Girados' life was shattered with the death of his father Rafael from cancer. Luther stepped up to become the man of the house, and used the money he made from working to help buy food for the family, who then lived in a house in Caliente right alongside the railroad tracks. His mother never learned to drive, so Luther did the shopping and took his mother and sisters where they needed to go.

In 1964, Luther married Vivian Queen of Bakersfield, and they would go on to raise three children: Joy, Julie and Brian. They lived in Caliente Canyon until the flooding in the winter of 1982-83 swept away their home and they lost everything they owned, including the wolves they raised.

Most of his adult life, Luther worked as a pipefitter with a union in Bakersfield. One of his joys in life was music. He was taught to play guitar by another Nuwä, his cousin Norman Butterbredt, and he also used to play and sing with his cousin Harold Williams. Luther's father Rafael was also a musician, and while he mostly played guitar, Luther was also able to play the fiddle like his father.

In his later years, Luther lived in Walker Basin and he formed a band with some of his neighbors called the Piute Mountain Boys. The group played at Twin Oaks General Store, which marked an amazing transformation: the tight-lipped Indian boy who didn't like to speak in front of his classmates was, many years later, in the same old schoolhouse building standing in front of a crowd with a microphone, singing and playing guitar.

Luther's personal evolution, from a taciturn man who would stand silently in the back of a gathering with his arms crossed over his chest, to someone who could address a crowd and offer prayers in Nuwä, was partly a result of his years of hard work to document and teach his language.

When the Girado children were born, there were probably about 100 fluent speakers of the Nuwä language. Now there is only one. Lucille is the very last.

Thanks to the language program, there are more than a dozen of us with varying degrees of Nuwä language skills, but no one will again grow up in a home where only Nuwä is spoken.

It is with profound sorrow and sadness that I contemplate a world without Luther Girado. I spent thousands of hours with him over the past two decades, and learned so much from him. He was a living gift from the ancient ones to our time. He endured burdens as a result of his ancestry, but he didn't whine or complain. Luther lived his life on his own terms and in his own way. He was proud and fierce and independent.