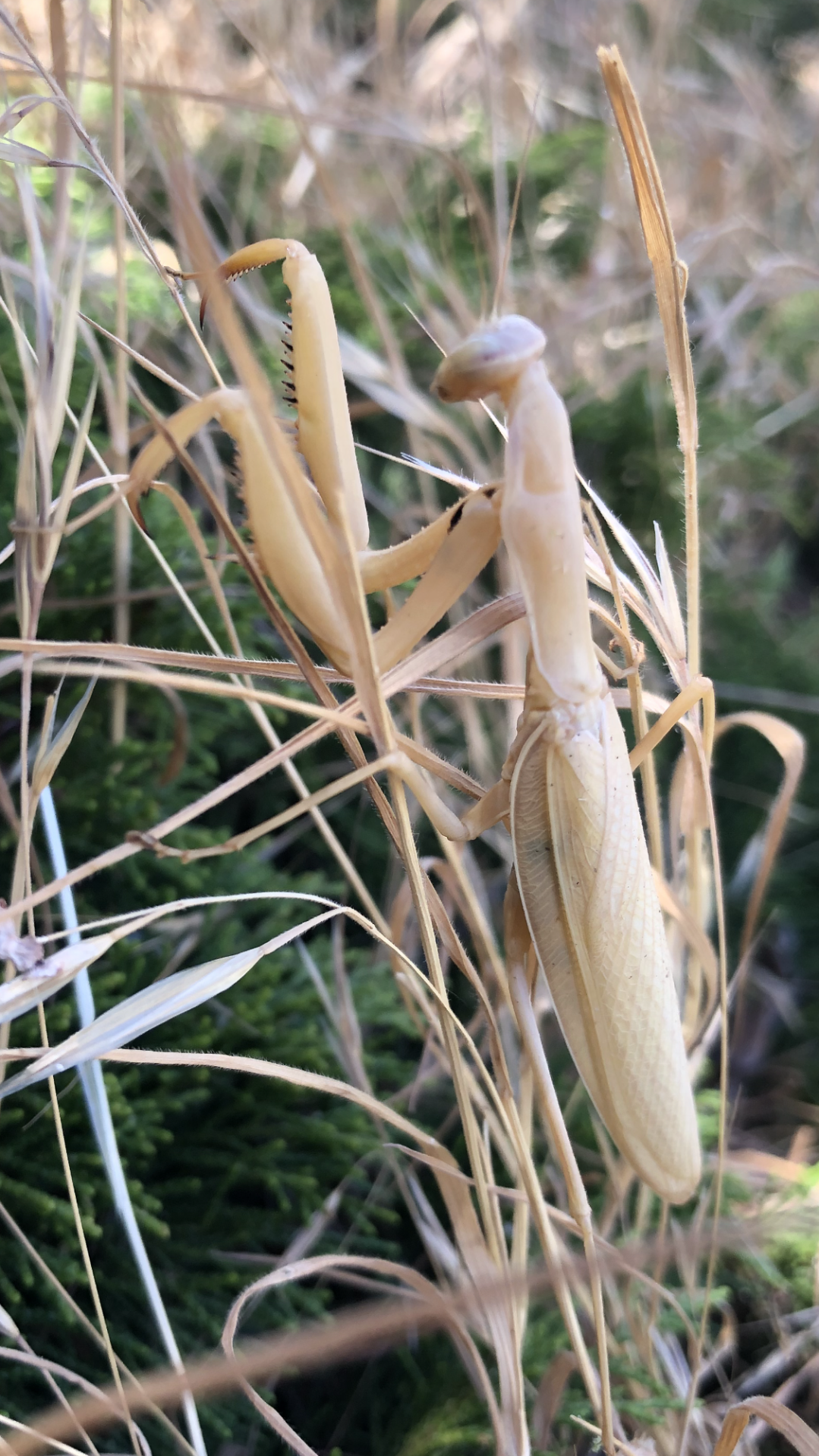 This Praying Mantis is a tan color that blends extremely well with faded dry grasses. 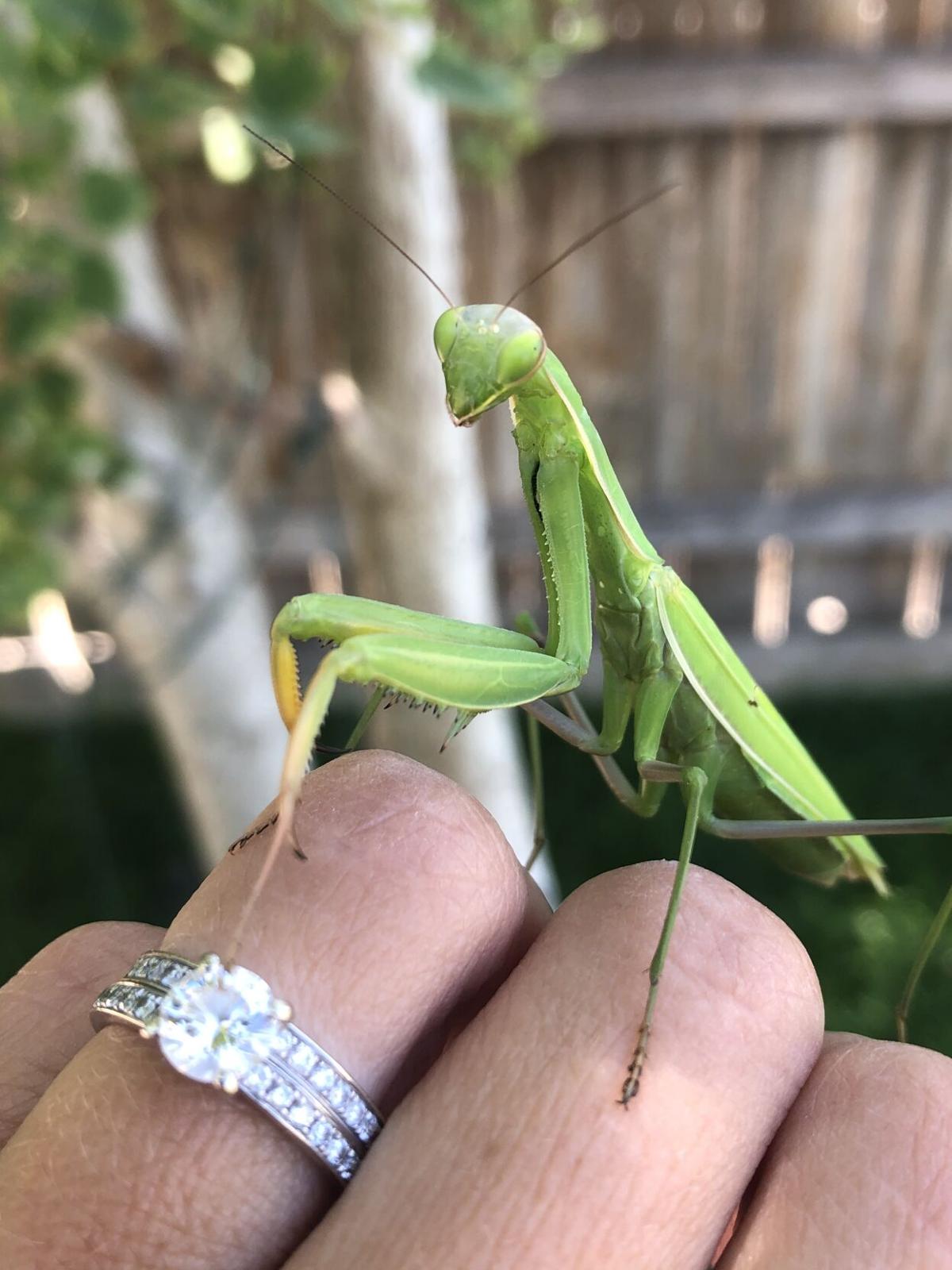 Praying Mantids are often found in a green shade, like this one discovered by Ashley True-Richardson. 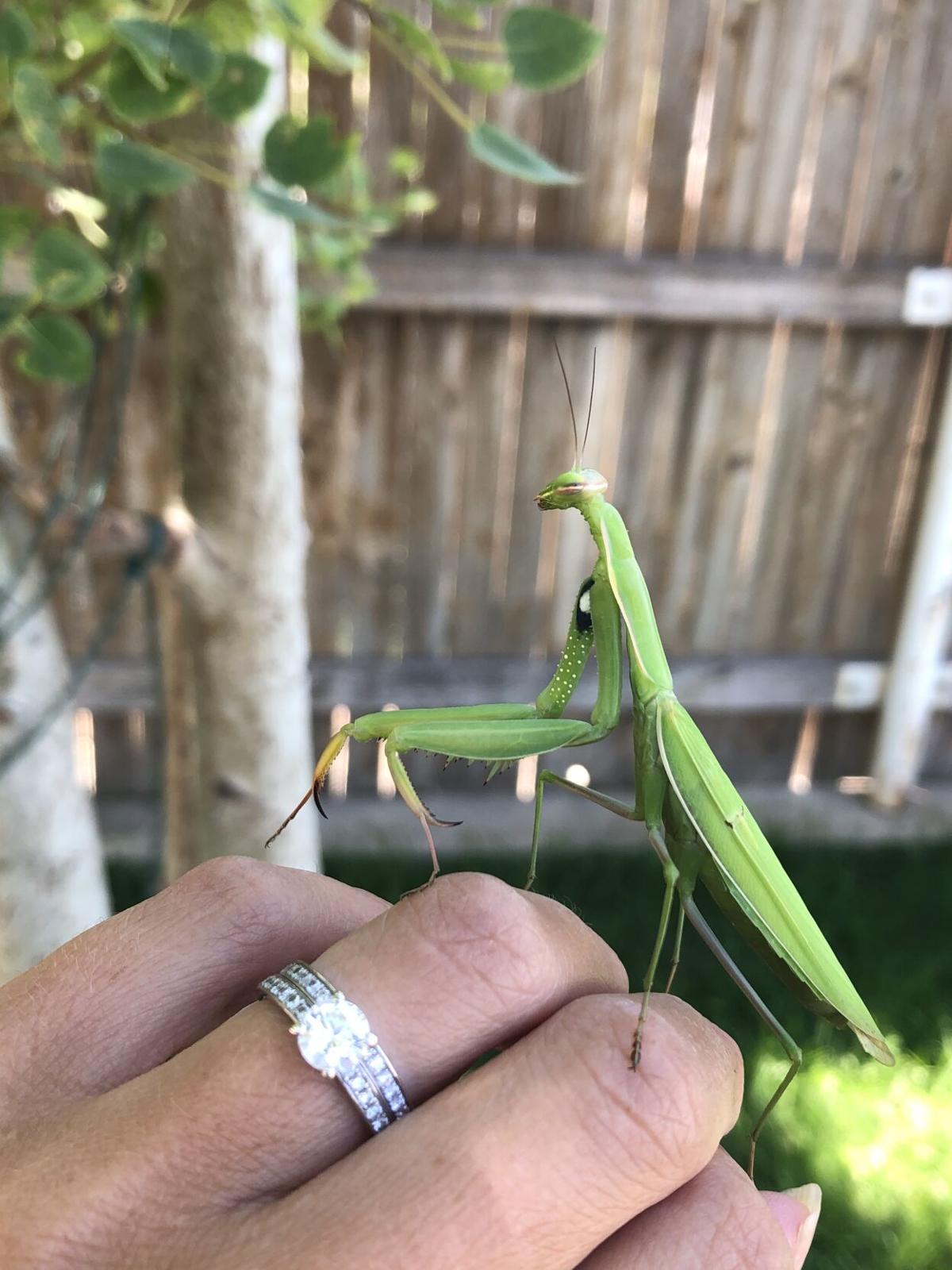 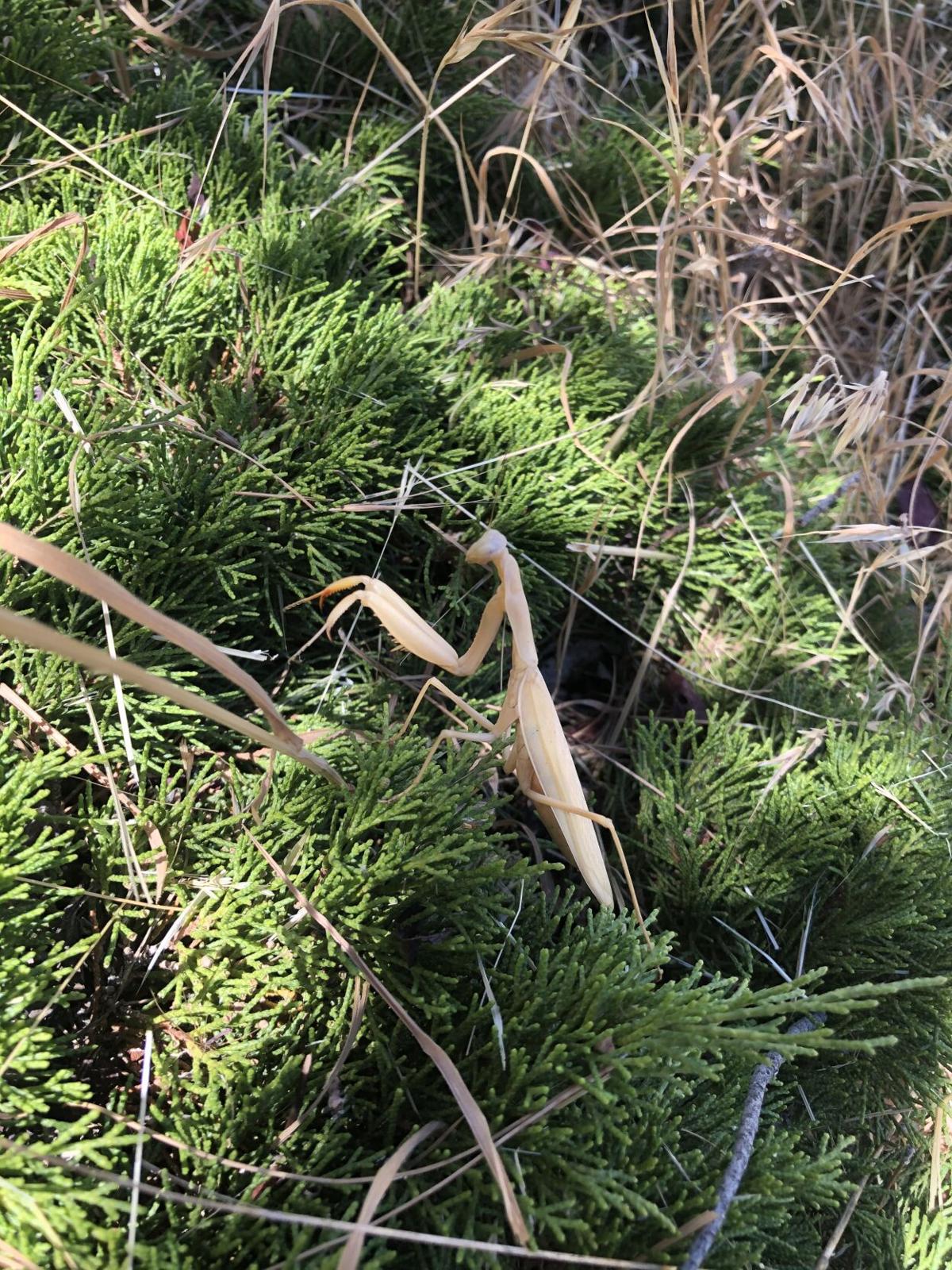 A Praying Mantis waits for a smaller insect to come by close enough to grab. 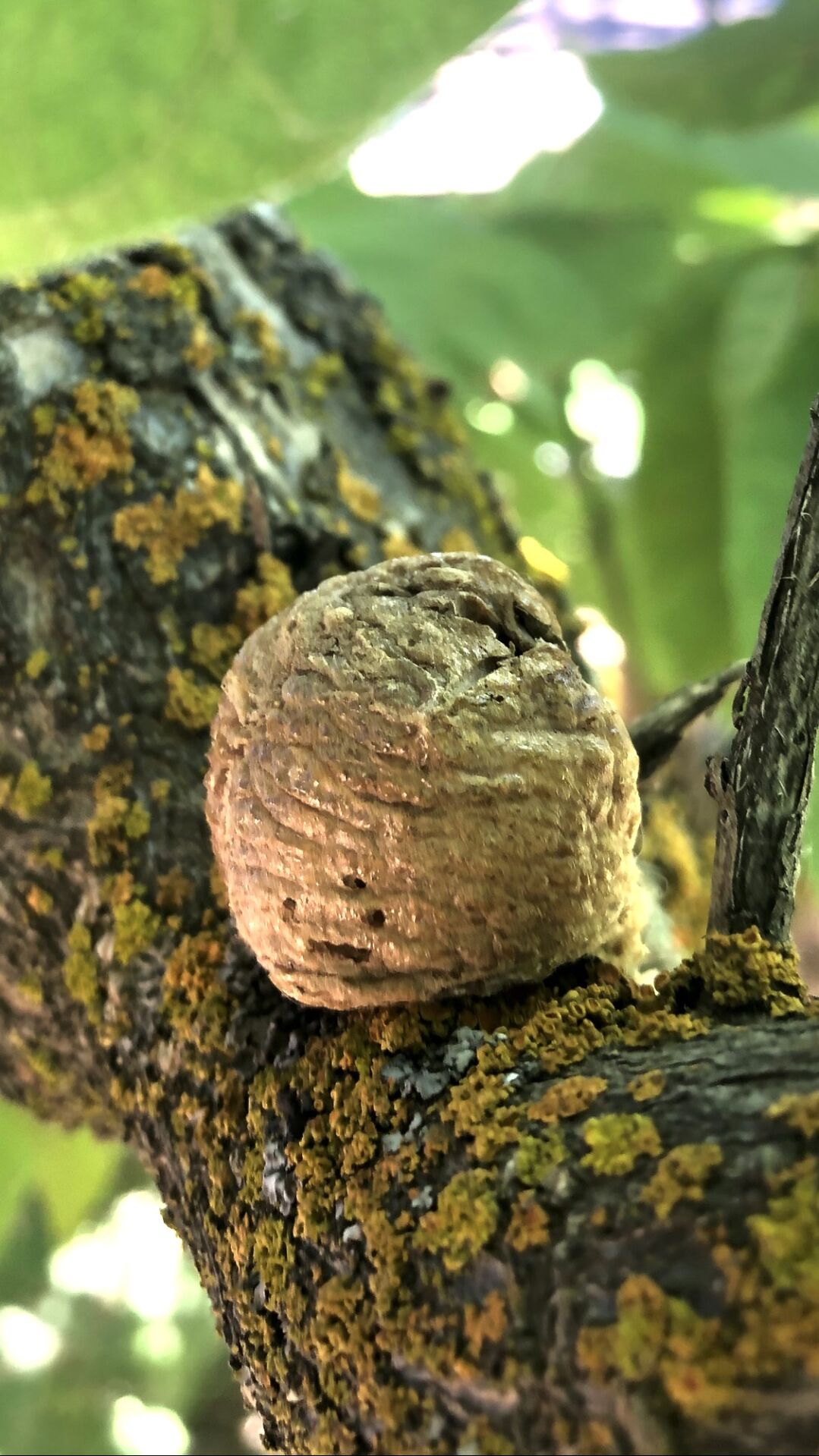 The egg case of a Praying Mantis is known as an ootheca.

This Praying Mantis is a tan color that blends extremely well with faded dry grasses.

Praying Mantids are often found in a green shade, like this one discovered by Ashley True-Richardson.

A Praying Mantis waits for a smaller insect to come by close enough to grab.

The egg case of a Praying Mantis is known as an ootheca.

One of the most interesting insects in the Tehachapi Mountains is large and predatory, but has no venom or toxins to subdue its meal: Praying Mantids.

These charismatic creatures spend most of their time relatively motionless on vegetation, relying on their coloration to conceal them from would-be predators and prey alike. With an elongated body and rounded triangular head that can swivel more than any other common insect, a Praying Mantis is easy to identify.

Their distinctive, raptorial forelegs are the source of their common name: at rest, these look like arms clasped and raised in prayer. Rather than praying, however, these are used for preying: a Praying Mantis is a completely unselective predator that will seize and eat virtually any arthropod that they can grab.

There are documented instances of big tropical Praying Mantids even eating hummingbirds or small lizards, but I highly doubt that a Praying Mantis in our area could tackle anything so large.

Instead, they eat a wide variety of small insects, from beetles and crickets to grasshoppers and spiders. Praying Mantids are often touted as useful in a garden for biological pest control, since they will eat potentially destructive insects like cutworms or aphids.

However, as indiscriminate feeders, they will also prey upon beneficial insects like bees, butterflies and other pollinators, so their practical use in pest control is rather limited. However, you can be certain that they won't harm any of your plants, and they may take out some of the insects that are chewing on your garden.

It is somewhat surprising that Praying Mantids (also referred to plurally as Praying Mantises) are such effective predators, since they lack the venom used by more formidable predators like spiders and wasps.

Instead, a Praying Mantis waits as an ambush predator, and when an unsuspecting insect happens by, the mantis simply seizes it in its spiky forearms and starts munching on it like an ear of corn. They often remove the head first, and may discard less appetizing portions like wings or a grasshopper's chitinous back legs.

Female mantises are typically much larger than the males, and a mating session may end with the smaller male being cannibalized by his date. Female Praying Mantids typically lay their eggs in autumn. The egg case, known as an ootheca, is a non-descript light brown or tan, like the color of root beer foam. It hardens to a durable, domed chamber that is typically stuck fast onto a branch, wooden fence post, etc.

In spring, scores of tiny mantids emerge from the egg case in search of suitably tiny prey, with increasing size as the mantids themselves get bigger. Fellow mantis hatchlings may find themselves on the menu if other prey is scarce, so it's best if they disperse immediately.

The California Mantis (Stagmomantis californica) is one of the mantis species in our area, but European and Chinese mantids have also been introduced to many parts of the U.S., and there are other native species as well.

Mantids, although they typically live less than a year, make interesting pets. As long as you keep them supplied with crickets or other prey, and a suitable enclosure, they are easy to keep. We had a female named Morgana that actually seem to like resting on your hand, and would drink from droplets of water placed on your finger.

Praying Mantids are delicate but successful predators, and I'm always happy to spot them as they wait to devour smaller insects.