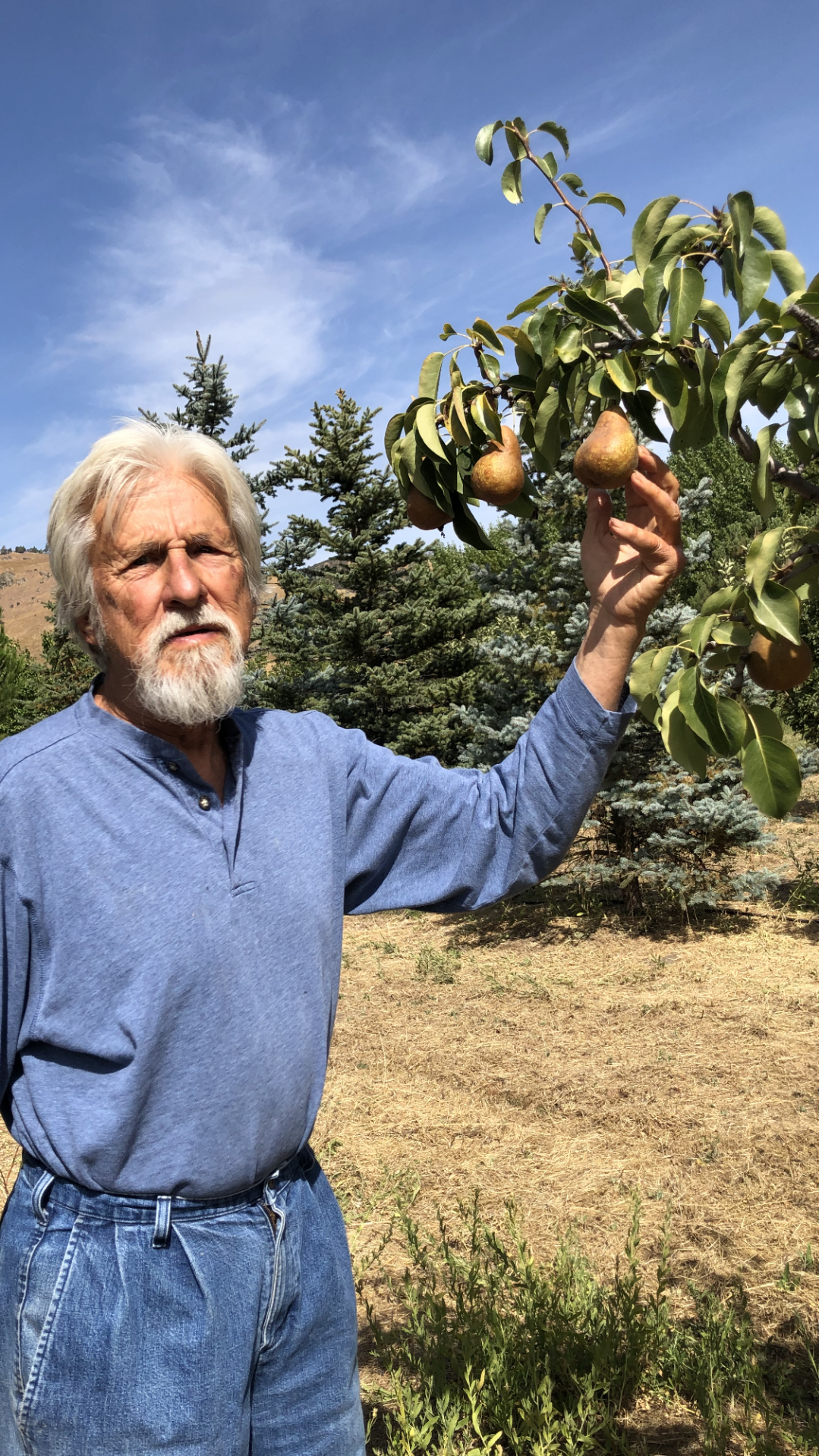 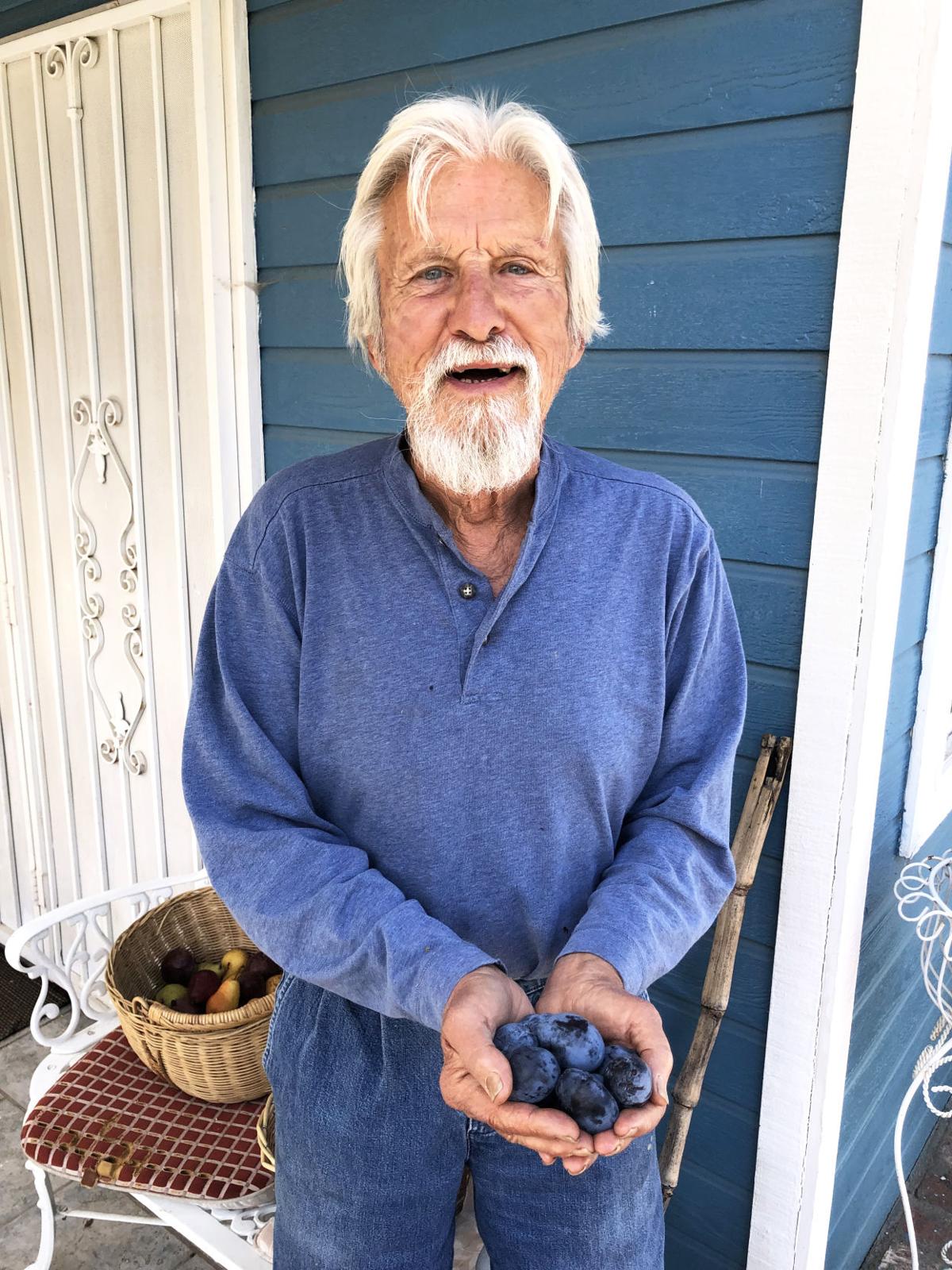 Rafael DeLeon with some plums that he raised. 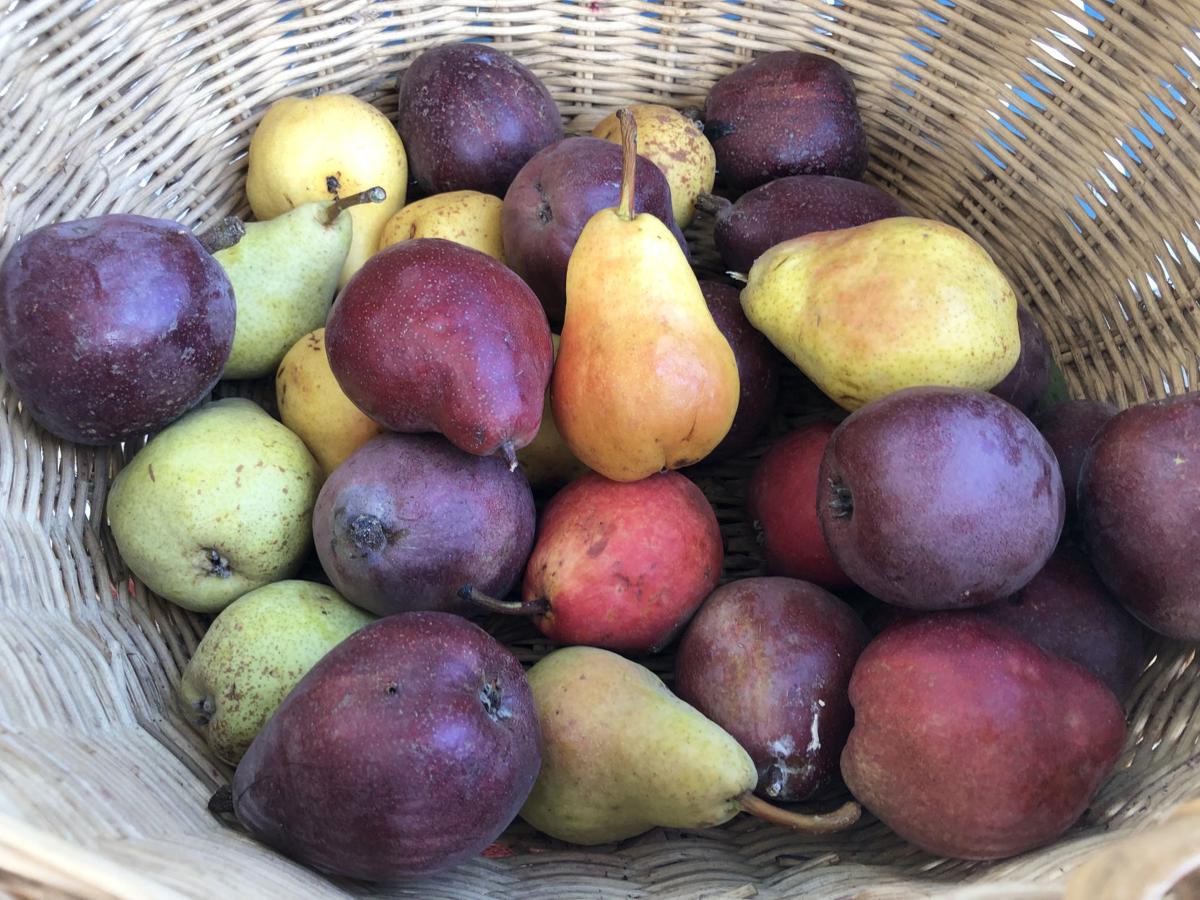 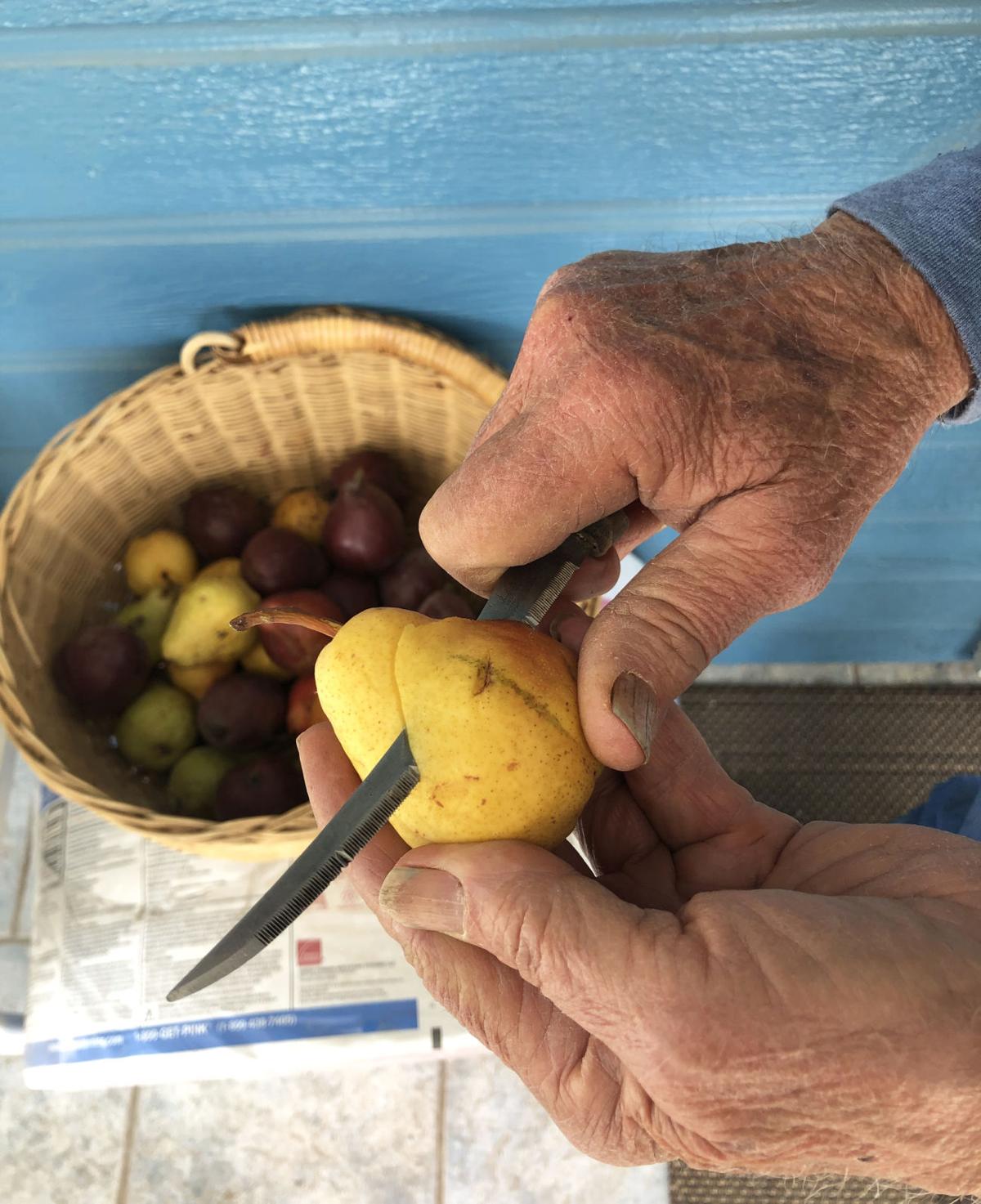 Rafael is a vegetarian and he cherishes the produce that he grows on his Tehachapi farm.

Rafael DeLeon with some plums that he raised.

Rafael is a vegetarian and he cherishes the produce that he grows on his Tehachapi farm.

Rafael DeLeon has done a lot of living in his nearly 82 years. He began life in Cuba, left after Castro took over, and has worked many long hours over the years to make his American immigrant dreams come true.

Rafael and his wife, Martha, bought 20 acres of raw land from the Sasia family in Brite Valley in 1980, and in the ensuing 40 years, Rafael has planted hundreds of trees and created a little paradise alongside Cummings Valley Road.

Still an active, robust and handsome man, the past eight decades of life have not dimmed his enthusiasm for life or the twinkle in his bright blue eyes. He sells organic fruit from what he calls his "hobby orchard" and loves his life in the Tehachapi Mountains.

Rafael was born in Cuba on Jan. 16, 1938, the eldest of Rafael and Emerida DeLeon's four children. His father was prosperous and owned several food warehouses and a gas station, and the younger Rafael worked hard alongside his father.

Then the Cuban Revolution ousted President Batista in 1958, and life changed for Cubans, including the DeLeon family.

"Castro said he would give us freedom and liberty," Rafael says, "Then they took everything from us. That was our freedom — freedom from everything we had worked for."

Rafael was just entering manhood and he despaired of his future in Castro's Cuba. So an aunt wrote to the U.S. State Department requesting an immigrant waiver for Rafael, and one was granted to him. He had just 66 days to leave before it expired. Accepting it cost him his Cuban citizenship.

"I lost my Cuban citizenship, but I hadn't been granted American citizenship — just a work visa," Rafael recalls, "I was a man without a country." He arrived on a flight to Miami on Jan. 8, 1962.

"Miami was a ghost town then compared to what it became," Rafael says. "There were no jobs, I looked every day and could find no work. Nothing at all." So he went to refugee center, and they were able to find him a job as a maintenance man and janitor at an Episcopal church — in San Francisco.

So Rafael flew to San Francisco and worked at the church, where he was provided with a place to live and $100 a month. When the minister bought a house that needed lots of work, Rafael worked 12-hour days helping get it cleaned up and livable. When the job was finished after a week or so, the minister said "I have a present for you," and handed him an envelope with $110. Rafael refused to accept it, since he was so grateful for the church's kindness toward him. "Later when I got back to the room where I stayed, I found the envelope had been placed in a dresser drawer, so I decided that it was meant for me to keep it," he said.

Rafael was happy to have a job, but there were almost no other Cubans around, and he was homesick and lonely. "Emotionally, I was thoroughly destroyed," he remembers. "I was missing my family and I had no friends. It was hard for me."

One day he walked down Market Street, hoping to find some additional work. He was directed to the Sheraton Hotel, where he was told a fellow Cuban was a manager. He went to see the man, who asked if he could speak English. "I can get by," Rafael responded, and the next day he was hired as a busboy in the banquet department.

Working at the Sheraton brought Rafael in contact with some famous people of the time. An Academy award-winning actress named Celeste Holm used to tip him 50 cents for giving her doggy bags for her little poodle. Rafael served Prince Philip on one occasion. He encountered actors Van Johnson, Rock Hudson and Forrest Tucker.

Rafael was able to save about $5,000 from his hard work, so he quit and went to school full time at San Francisco State College, studying chemistry. He shared a small apartment with five other Cuban expatriates, sleeping on the floor. Like Rafael, they were sons of men who had been successful in Cuba but had their assets seized when the communists took power.

Unable to find a part-time job around his school schedule, Rafael eventually ran out of money before he could graduate from college. He decided to try his luck on the East Coast, so he bought a used car and drove to New York with $68 in his pocket and stayed with a cousin. All of his clothes were stolen out of his car his first night there.

After a brief stint in New York, he moved to Boston, where he found a job unloading trucks at a Jewish grocery store. He was soon promoted to a job stocking shelves, and he worked there for seven years. He was granted citizenship five years after he had arrived in the U.S. The man without a country had one again. He helped bring his father and brothers from Cuba to live in America.

When he was 31 years old, Rafael took computer classes to learn about the fledgling computer industry. This led to a job building computers for the Honeywell Corp. in Brighton, Mass. When Honeywell announced a work reduction, Rafael was told he could transfer to San Diego and work for the company there. He decided to take the plunge.

After a couple of years, Honeywell had another staff reduction, so in 1971 Rafael moved to Los Angeles where one of his aunts lived. It was there that he met Martha, a third generation Mexican-American. They have now been married for 49 years, and Rafael says he was lucky to find her.

In Los Angeles, Rafael worked several jobs in auto sales, including owning his own used car lot. He later learned to make the kind of soft white cheese they made in Cuba, and went into that business for several years.

His home and heart are in Tehachapi now. "I was once tempted to leave for a warmer climate, but I just couldn't do it," Rafael says. "I love the fresh air, the scenery and the weather in Tehachapi. I put my sweat and blood into this place. And I wake up grateful every morning."

There are many different ways of defining "the American Dream." Rafael has worked hard to make his version a reality, and his life is a beautiful fulfillment of that.