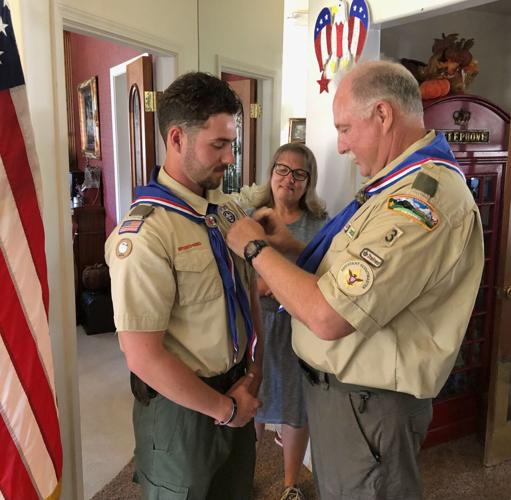 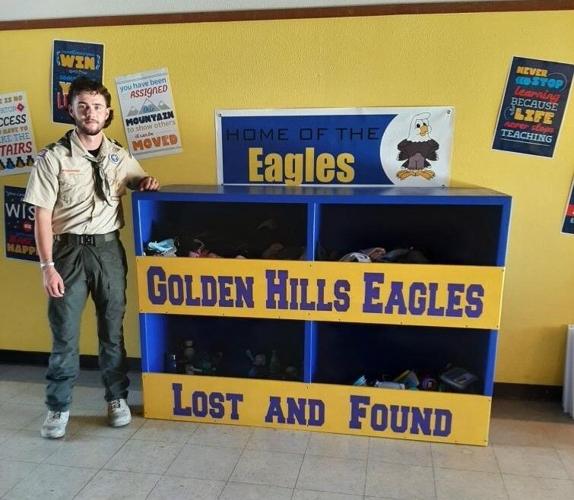 Jack Wood built and donated this Lost and Found bin to Golden Hills Elementary School as his Eagle Project. 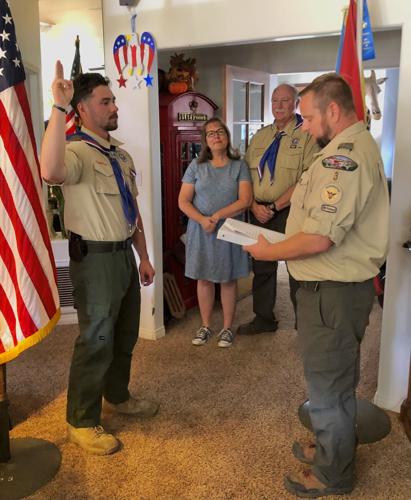 Scoutmaster Garret Kendrick administers the Eagle Charge to Jack Wood while his parents, Jerry Wood Jr. and Sandy, look on. 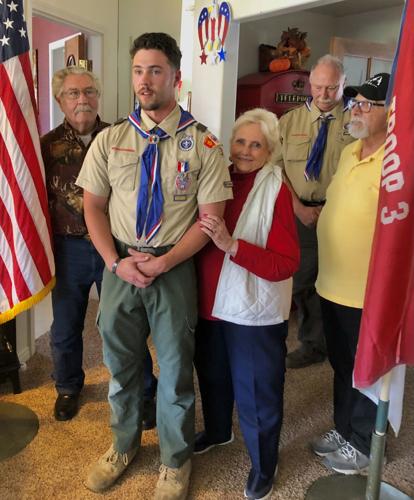 With Jack Wood at his Eagle Scout ceremony were (from left) proud family members, including grandparents Jerry and Barbara Wood, his father Jerry Jr., and maternal grandfather Mike Yancey.

Jack Wood built and donated this Lost and Found bin to Golden Hills Elementary School as his Eagle Project.

Scoutmaster Garret Kendrick administers the Eagle Charge to Jack Wood while his parents, Jerry Wood Jr. and Sandy, look on.

With Jack Wood at his Eagle Scout ceremony were (from left) proud family members, including grandparents Jerry and Barbara Wood, his father Jerry Jr., and maternal grandfather Mike Yancey.

Jack’s Eagle Scout ceremony was held on May 29 at the home of his paternal grandparents, Jerry and Barbara Wood. Jack received his Eagle pin from his parents, Jerry Jr. and Sandy Wood, and presiding over the event was Troop 3 Scoutmaster Garret Kendrick.

“Jack has been an excellent scout and he was determined to achieve this honor,” Kendrick noted. “We have been through many experiences together as he worked to earn his Eagle Scout, and he is a good hiker, camper, fisherman, etc. and is very comfortable outdoors.”

Kendrick’s own two sons, J. R., 18, and Maverick, 16, recently earned their Eagle Scout honors as well, and there are a couple of other Troop 3 scouts that are in the initial phases of their Eagle Scout Projects.

The Eagle Scout honor was first awarded more than 100 years ago, in 1912. Only about 4 percent of Boy Scouts persevere and earn their Eagle Scout status. The requirements have varied slightly over the years, but in order to be awarded, scouts must complete a total of 21 merit badges, including 13 that are required, covering topics like Camping, Citizenship, First Aid, Emergency Preparedness or Lifesaving, Environmental Science or Sustainability, Personal Fitness, and more.

One of the biggest parts of earning Eagle Scout honors is completion of an Eagle Scout Service Project, commonly referred to as an “Eagle Project.” This is a project to benefit a school, any religious organization or the community at large.

For his Eagle Project, Jack chose to build a Lost and Found box for Golden Hills Elementary School.

“I attended Golden Hills Elementary from kindergarten through fifth grade,” Jack wrote in his proposal for his project. “I can still remember the first time I lost my jacket and had to try and find it.” At that time, lost items were simply placed in a pile in the hallway, and Jack never did end up finding his jacket among the pile of other garments.

So for his Eagle Project, he built some bins specifically for items that had been found at the school, so that students who lose something will have a known place where they can go and look. The attractive bins are painted in school colors and have “Golden Hills Eagles Lost and Found” painted in large letters.

The bins were delivered to the school in November of last year, when Jack was still 17 (scouts are generally required to complete their Eagle Scout project before reaching 18). Jack had some help from his father, Jerry Jr., who first earned his own Eagle Scout when he was 15. Jerry Jr.’s project was building a stage for a summer camp at the Christian Life Assembly church.

A group of friends and family members gathered for Jack’s Eagle Scout ceremony, including his aunt, Crystal Wood, with whom Jack is very close, and his maternal grandfather, Mike Yancey.

Jack has partially grown up at Jerry and Barbara Wood’s farm, which he loves, and he has always been a help to his doting grandparents. Those in attendance all had praise for Jack’s character and drive, including local apple grower John Pulford, for whom Jack worked.

It is common today to denigrate young people as unmotivated and entitled, but there are actually many who, like Jack Wood, want to be responsible for themselves and contribute to their community. They are reason enough to be optimistic about our future.