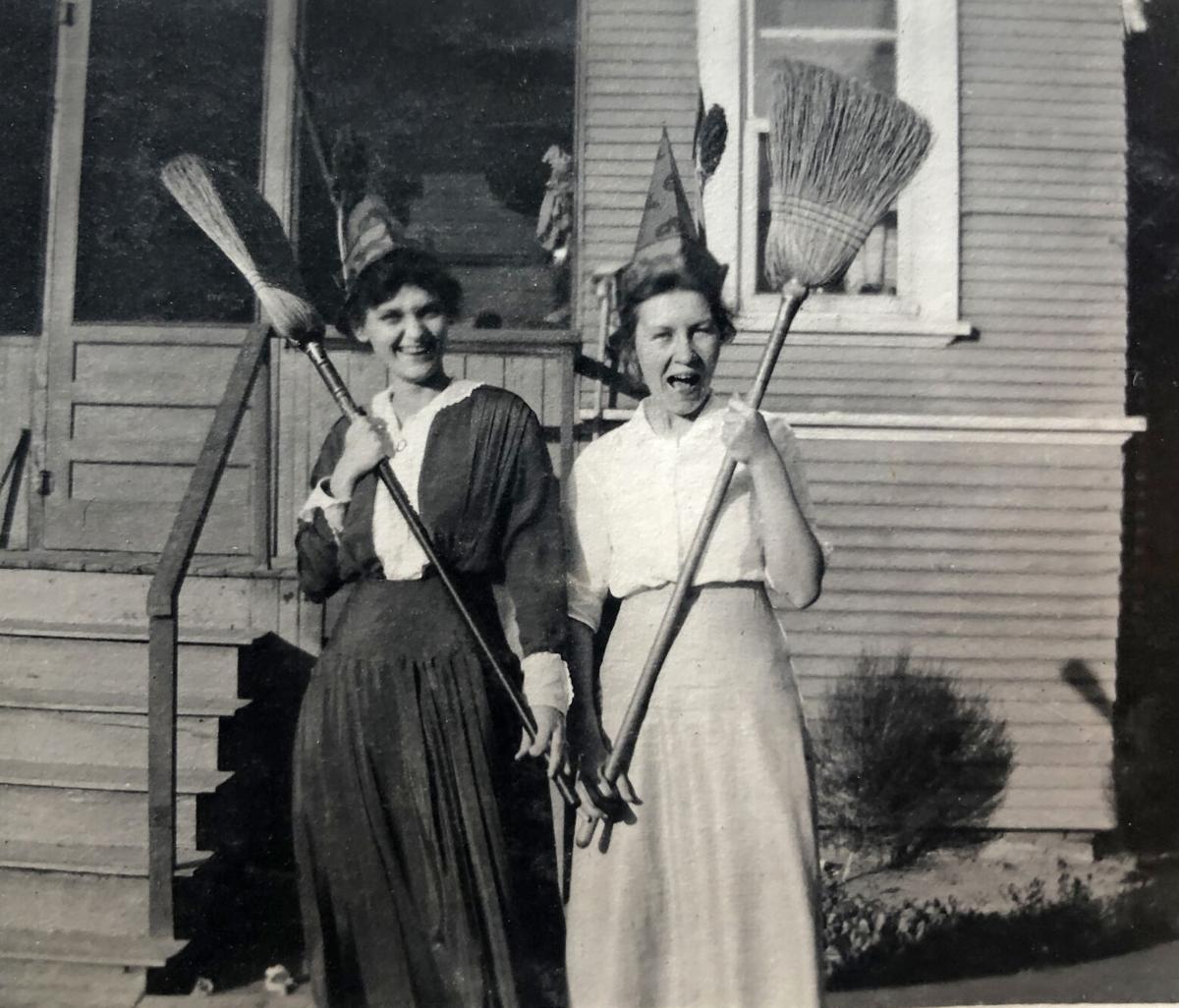 A couple of my great-aunts were witches on Halloween in 1915 — costumes were generally not as elaborate back then. 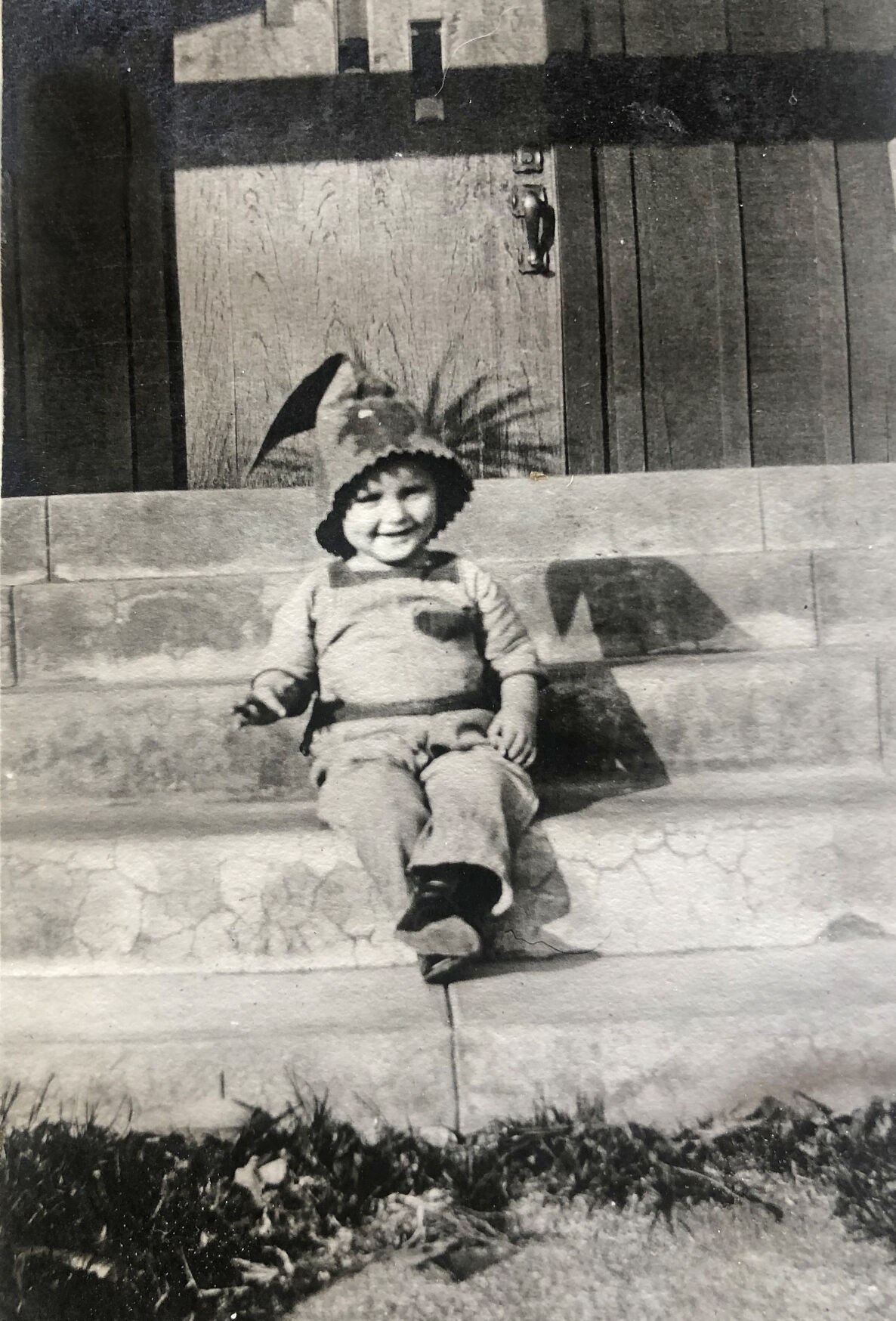 My uncle, Henry Hand, dressed for Halloween in 1919. 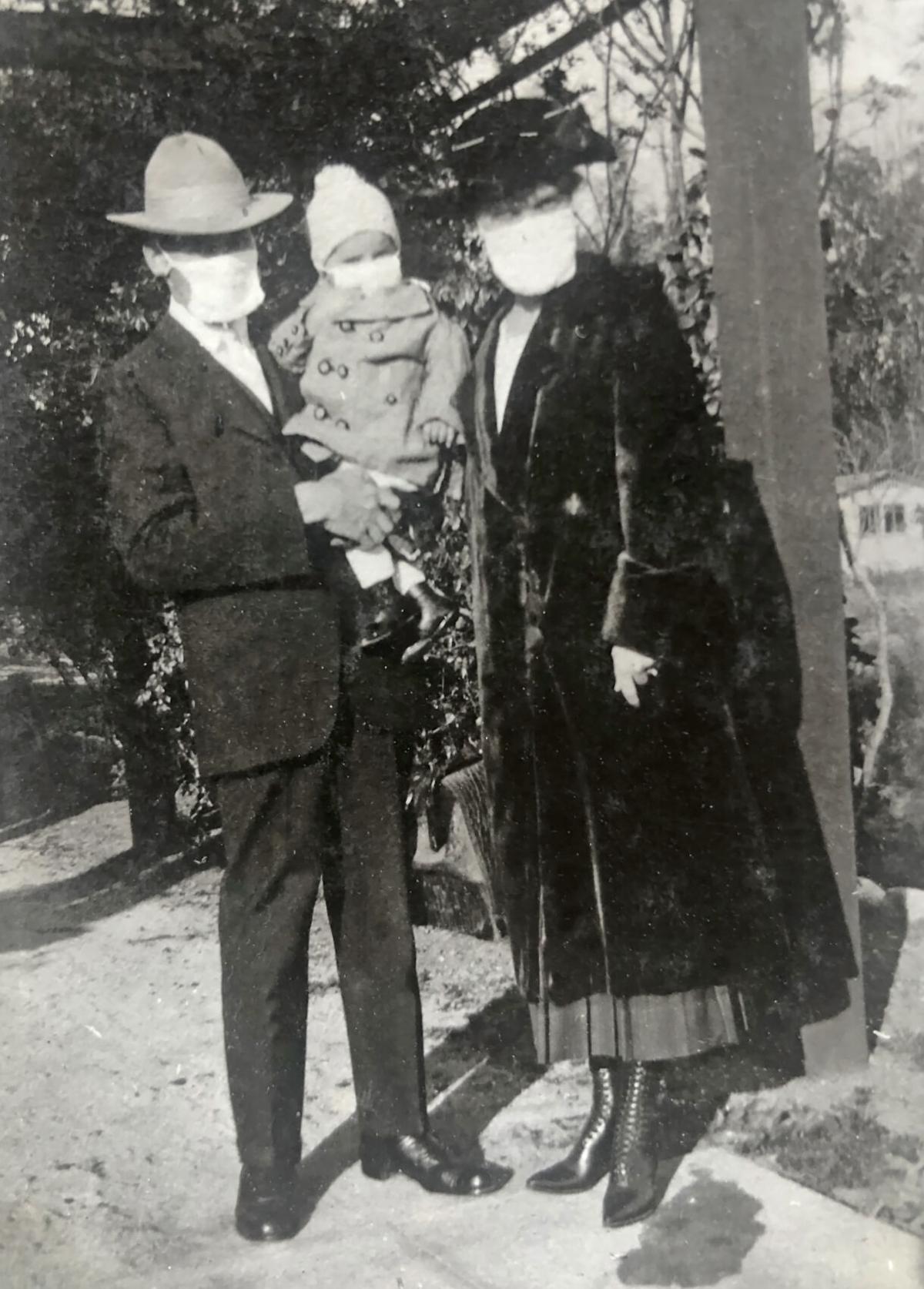 My grandparents and uncle in 1918, wearing face masks because of the Spanish flu pandemic. 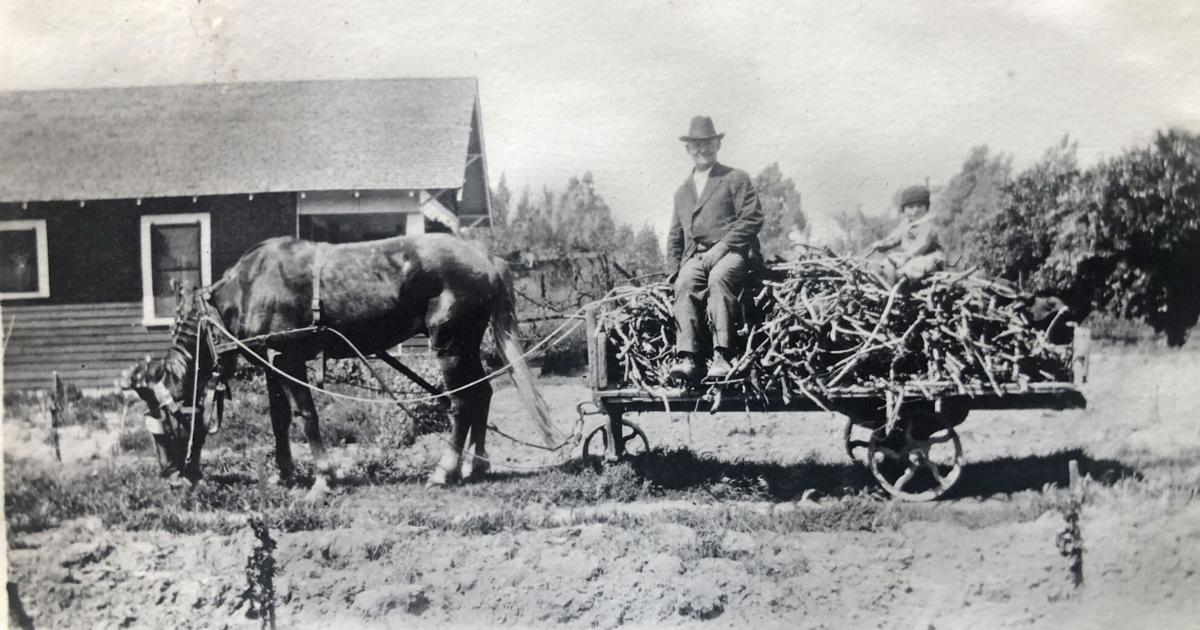 My great-grandfather and uncle, with a horse and wagon similar to the one used to round up the outhouses. 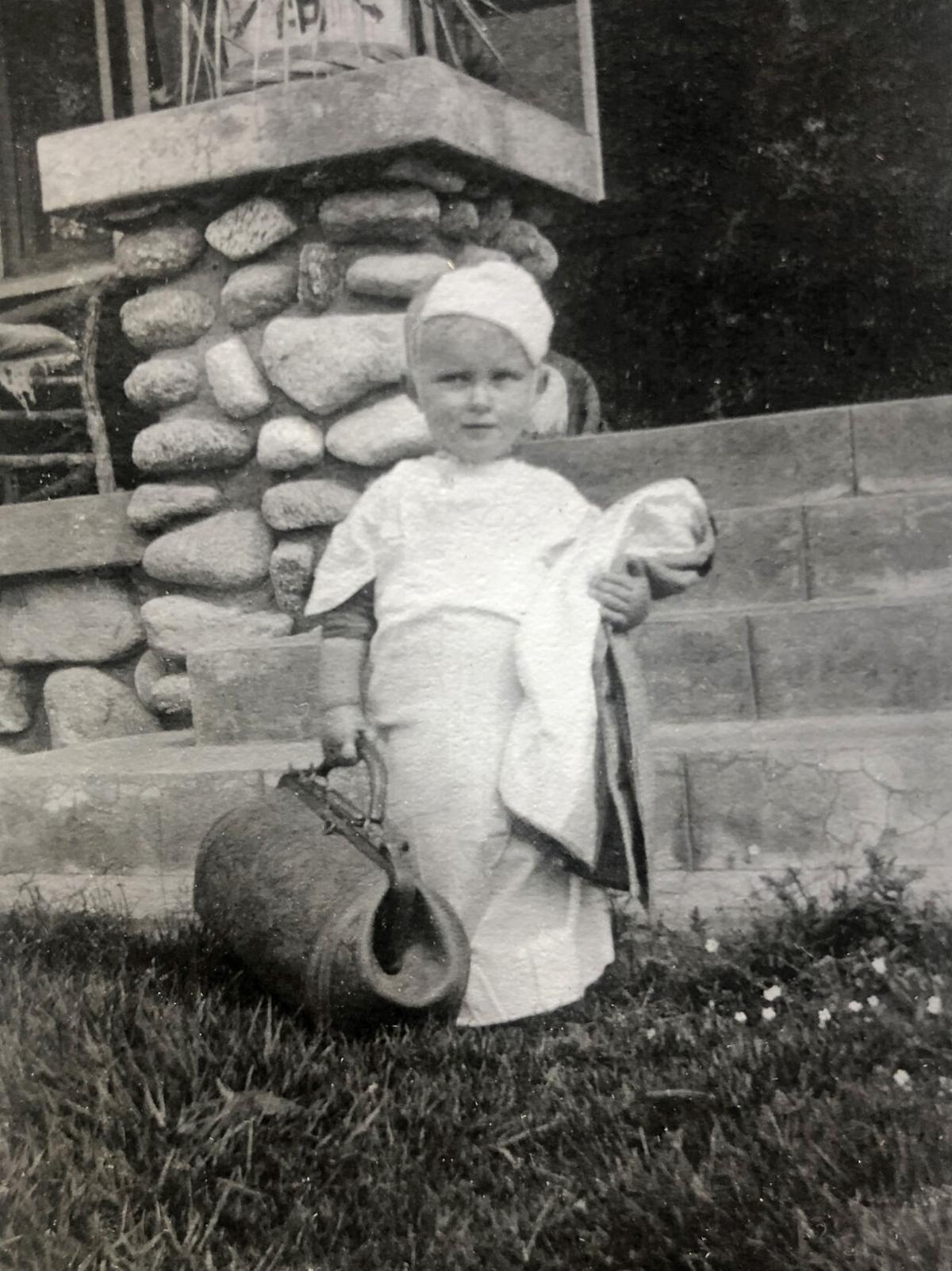 A couple of my great-aunts were witches on Halloween in 1915 — costumes were generally not as elaborate back then.

My uncle, Henry Hand, dressed for Halloween in 1919.

My grandparents and uncle in 1918, wearing face masks because of the Spanish flu pandemic.

My great-grandfather and uncle, with a horse and wagon similar to the one used to round up the outhouses.

This year's Halloween, like so much else about 2020, didn't have the usual feel or experience surrounding it. But Tehachapi families decorated their houses and carved pumpkins, and many people (young and older) still got into the spirit of the occasion by dressing up.

A century ago, Halloween didn't used to be as big of an event as it is now, but people in Tehachapi still celebrated in various ways. Here is a story that was told to me by Brad Krauter, who was a Kern County agriculture inspector in Tehachapi in the 1950s and '60s.

Brad was born Neodesha, Kan., in 1911, and his family moved to Kern County in 1917, arriving by train that wound its way around the curves and through the tunnels of the Tehachapi Mountains. Brad grew up on a farm near Arvin, and moved up to Tehachapi to work as an ag inspector. He was very knowledgeable and observant, and he had a great sense of humor.

"Did I tell you the Halloween story?" Brad asked me one day about 30 years ago, as I sat with him in his living room on B Street. "Not yet," I answered.

"The fellow who told me this was the culprit who did this thing," Brad explained. "He was born or almost born in Tehachapi, and his dad had a business here. This happened prior to World War I, probably around 1912 or 1913. One Halloween night, this young man, I'll call him Douglas, he and a couple of kids around 15 or 16 thought it would be fun to gather a few outhouses.

"The town wasn't on sewers back then, everyone had outhouses. After his old man went to bed, Douglas hitched up the horse to the delivery wagon, and the kids started up and down the alleys, loading up outhouses. The kids had probably already spotted them, and there was a whole string of railroad flat cars that sat for who knows how long over by the loading pens (along Tehachapi Boulevard, next to where the City of Tehachapi's new Park and Ride parking lot is located today).

"The kids took these outhouses over there and shoved them up on the flat cars. Well, they worked most of the night, and it so happened that was the night that the train got orders to hook onto the flat cars. It came up from Mojave and hooked onto them and started down the tracks. Well pretty soon the conductor on the train looked ahead of the caboose where he was riding, and saw these 'convenience houses' and put the brakes on.

"The railroad manifest said empty flatcars, it didn't say loaded with whatever they were loaded with, so the train crew backed up and unhooked the cars again. About this time some of the early risers started to get up around town, maybe to go to Monolith to work. They missed their 'necessities.'

"I guess they eventually got their outhouses back, and hopefully got them sorted out and back where they belonged. I don't know if Douglas' father ever wondered why the horse was so tired making deliveries that day, but the horse had worked all night. The boys who were responsible got away with their mighty prank and were never found out."

So the kids of a 100 years ago were not so well-behaved as they would have had their own children and grandchildren believe, in the decades that followed their Great Outhouse Caper.

I've included a few family photos of Halloween from that general era, including a 1918 photo of my grandparents holding my Uncle Henry when he was a baby. Notice that all three of them are wearing face masks, as a result of the Spanish flu pandemic that killed so many people that year. Sometimes the past doesn't stay in the past. . . .