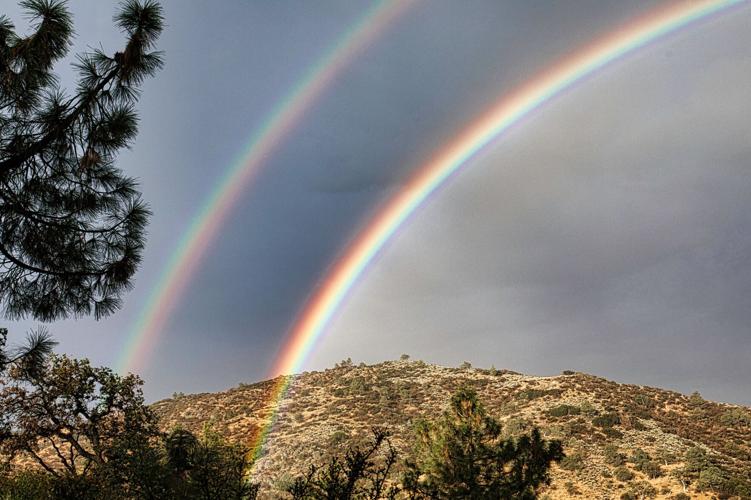 A double rainbow was briefly visible in Bear Valley Springs. The color sequence is reversed in the secondary rainbow. 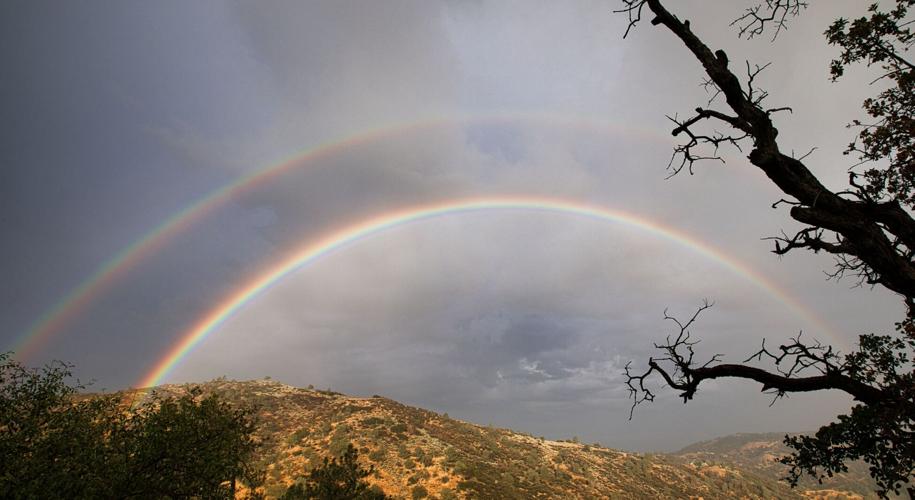 A secondary rainbow is technically always present when you see a primary rainbow, but they are seldom as visible as this lovely example.

A double rainbow was briefly visible in Bear Valley Springs. The color sequence is reversed in the secondary rainbow.

A secondary rainbow is technically always present when you see a primary rainbow, but they are seldom as visible as this lovely example.

The rains arrived in the evening of Sunday, Sept. 11, and between 8 and 10 p.m. produced about 0.4 inches in many parts of Tehachapi. The rains returned again the following day around noon, and added about another 0.2 inches.

In typical monsoon fashion, Monday included some sunshine and blue skies earlier in the morning, but then the sky darkened noticeably and the rain started as a few big drops. In a minute or two, the showers had turned to a torrential downpour with runoff flowing down many sloping surfaces.

The rain let up and turned to a light rain for about a half-hour, then stopped entirely and some scattered sunshine returned in places by the afternoon.

It was on Monday morning that my friend Toshimi Kristof saw and photographed a good example of a double rainbow in the Bear Valley Springs area. A double rainbow refers to a second, fainter rainbow seen above the primary rainbow. These are caused by light reflecting a second time inside water droplets.

Theoretically, every primary rainbow is accompanied by a secondary, larger and fainter rainbow, but these are often too weak to spot. It’s easier to see them if there are darker clouds behind the rainbows, which was the case on Monday when Toshimi took her photos. You might not notice it in the moment, but when you look back at photos of rainbows, you can often see at least faint traces or hints of color from a secondary rainbow above the primary one.

The colors of a rainbow were first described by Isaac Newton in 1672, and he eventually settled on a sequence of seven colors from the inner edge to the outer edge: red, orange, yellow, green, blue, indigo and violet.

The rainbow sequence has commonly been remembered by the mnemonic Richard of York Gave Battle in Vain, using the first letters of each word to represent the color sequence. That can seem a bit obscure for American students, though, so there is also the well-known mnemonic of fictional person ROY G. BIV to represent red, orange, yellow, green, blue, indigo and violet.

In a double rainbow, however, the colors are reversed, so they are VIBGYOR. There is a dark area between the primary rainbow and the large secondary rainbow, and this area is known as Alexander’s Band. It was named for Alexander of Aphrodisias, a Greek philosopher who is regarded as the most noteworthy commentator on the works of Aristotle. Alexander, who lived in the time period of about AD 170-250, was the first to describe the area between the two rainbows.

In his classic book "A Tramp Abroad," Mark Twain famously opined that, “We have not the reverent feeling for the rainbow that the savage has, because we know how it is made. We have lost as much as we gained by prying into that matter.”

Even setting aside his regrettable use of the word savage, I’m not sure that I agree with Mr. Twain on that point — rainbows still seem to give us great delight, despite knowing the science behind them, and their fleeting and colorful beauty make the memory of them last long after the storms that they accompany have cleared. ...