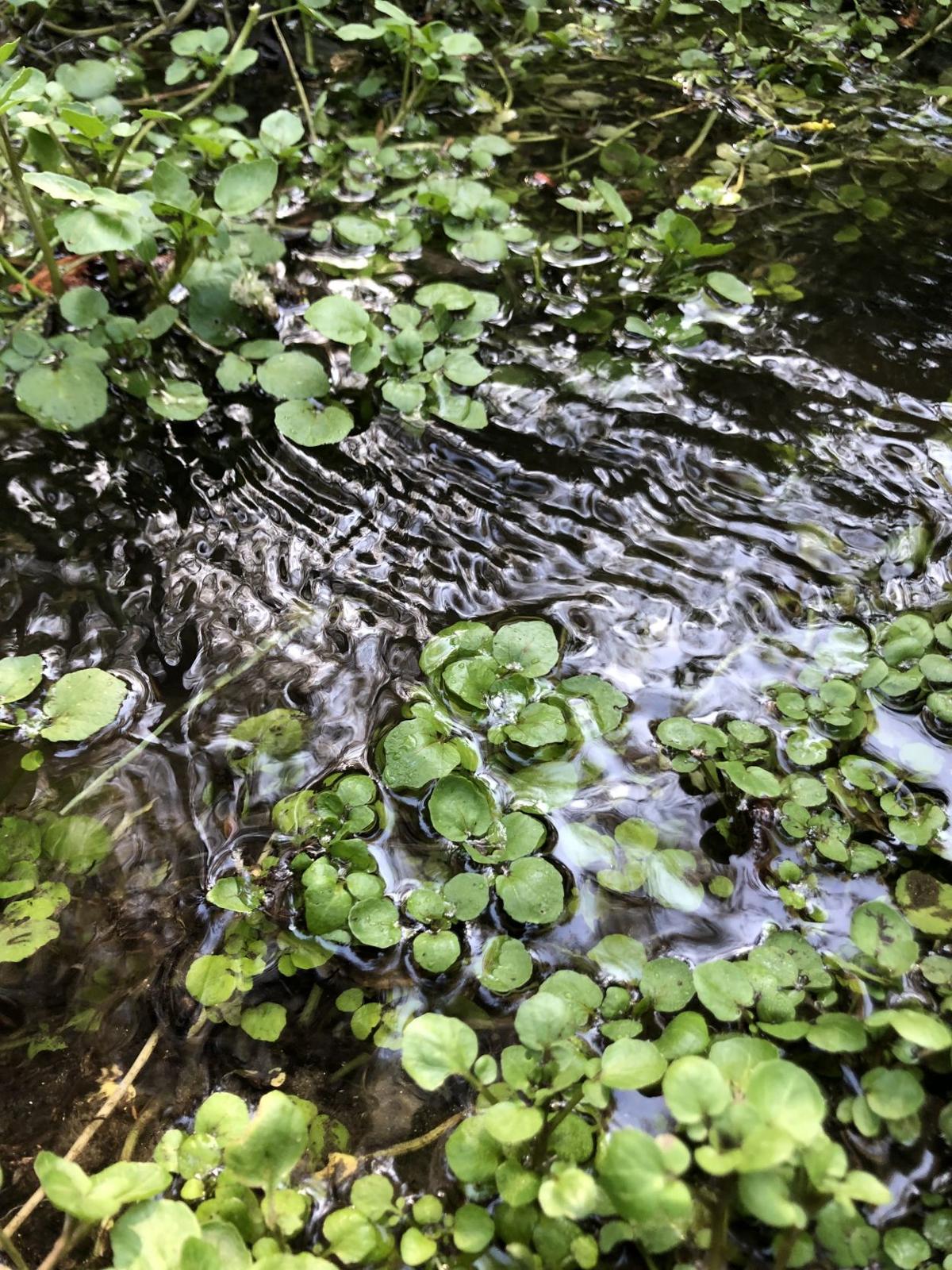 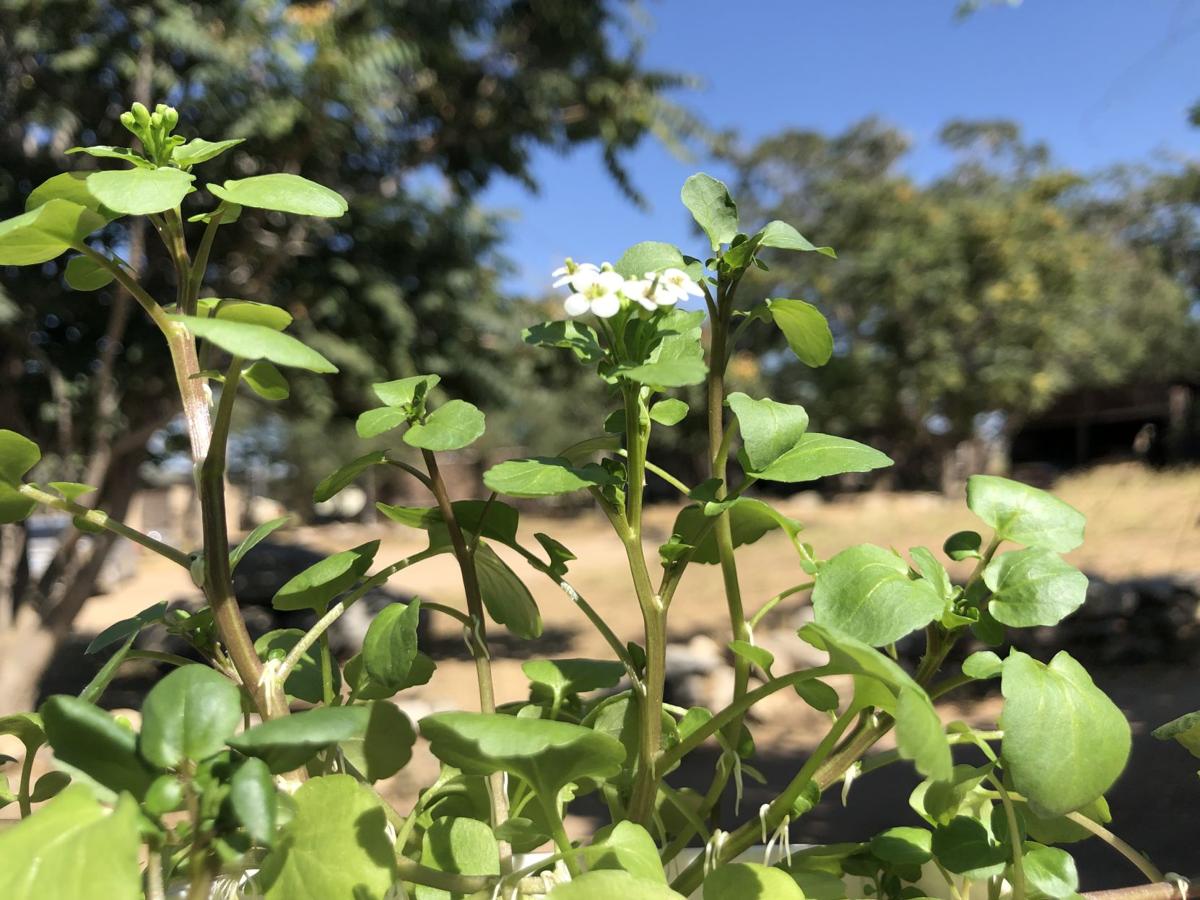 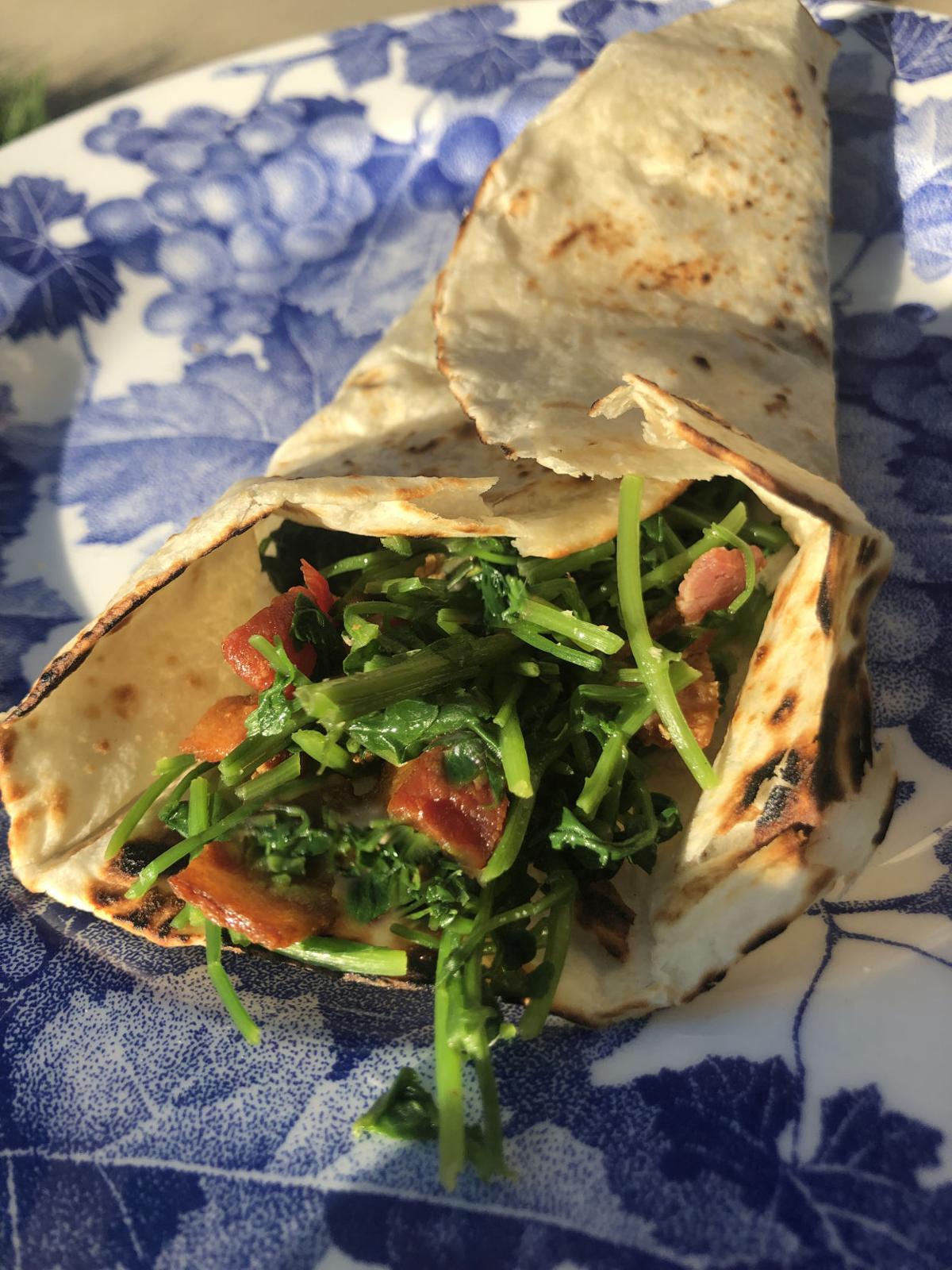 Watercress brought to a boil and then drained and mixed with a little bacon and grease and placed in a tortilla became a favorite food of transitional Nuwä people beginning in the 1870s.

Watercress brought to a boil and then drained and mixed with a little bacon and grease and placed in a tortilla became a favorite food of transitional Nuwä people beginning in the 1870s.

Most invasive, non-native plants offer few benefits and a number of downsides, like sharp stickers or burs, a tendency to force out native species, etc. There is one, however, that has no thorns, whose range is limited to specific areas, and is also tasty and nutritious to eat: Watercress.

Watercress (Nasturtium officinale) can be found throughout Kern County, wherever there are creeks, no matter how small, that can provide them with the streamside habitat they prefer. Caliente Creek has Watercress growing along its banks in countless places, as does Walker Basin Creek. Tehachapi Creek, Sycamore Creek and Oak Creek also host Watercress in their upper reaches where at least a little water typically flows year round.

Watercress is native to Europe and Asia and was brought to North America by immigrants. Because of the innate dispersal opportunities provided by their creek habitats — water does flow, after all — Watercress quickly spread into many watersheds.

Unlike most "weeds" or other introduced plants, the arrival of Watercress is not known to have caused harm. It thrives in creeks, but doesn't create dense choking mats that exclude other vegetation, like some introduced aquatic plants do — we're looking at you, water hyacinth and hydrilla.

Watercress is browsed by deer and livestock, and Native Americans quickly added the relative newcomer plant to their diet. The Nuwä, the Tehachapi Indian people also known as Kawaiisu or Paiute, called Watercress by the name poh-oh-pah-toor, meaning "in the water."

Nuwä people ate Watercress raw, often with salt, or boiled and mixed with bacon and eaten inside a tortilla. This is how I was taught to eat Watercress by Nuwä members of the Williams and Girado families, and it is still my favorite way to this healthy plant.

And Watercress is a nutritious plant. It has been eaten since ancient times, and is believed to have been served to Roman soldiers. It is especially rich in Vitamins K and C, and people who ate watercress regularly never got scurvy. Although it has the genus name Nasturtium, it is not closely related to the ornamental flowers known as Nasturtiums, which actually belong to a different genus entirely.

There is an index of food called the ANDI, which stands for Aggregate Nutrient Density Index. This is a measurement of a food's vitamin, mineral and phytochemical content compared to its caloric content. The numerical ranking goes from 1 to 1,000, and foods with lots of nutrients and low amounts of calories ranker higher. Soda was at the bottom with a 1, and Watercress got the highest score possible — 1,000.

Watercress around here typically grows fairly low, reaching from four inches up to about a foot high. Its roots anchor along the banks and in the mud under shallow water right in the creek. The hollow floating stems also put down lots of roots into the water itself.

Watercress has little rounded spade-like leaves, and produces pretty diminutive white flowers. Many entries about Watercress caution that once these white flowers appear, the leaves become quite bitter, but I have eaten Watercress that's flowering and haven't detected any extra bitterness.

Watercress is used in a variety of ways, including in green salads, though it can be quite peppery. This sharpness seems to vanish when Watercress is cooked, and it is used in soups, roasts, omelets, pesto and more. It is increasingly being used in smoothies and green juice blends.

In Victorian times, Watercress tea sandwiches were quite popular, and consisted simply of two very thin slices of buttered white bread, the crusts carefully removed, with Watercress placed between two bread slices, a little salt and pepper added, and the resulting sandwich sliced diagonally a couple of times to form little triangles. Sometimes thin cucumber slices were added to the Watercress leaves inside the sandwich for a little added crunch. Some cooks start by washing the Watercress, then they remove the leaves from the stems and soak them in a mixture of two tablespoons of white vinegar in two quarts of cold water for 30 minutes to ensure a clean taste, then rinse the leaves again with clean water and pat them dry.

Of all the invasive plants that humans have inflicted on the environment of North America in the past 400 years, it's hard to think of one more benign and potentially as useful as Watercress. This plant has been nurturing humans for centuries, and you can grow your own or buy it from a grocery store and try some time-tested recipes.