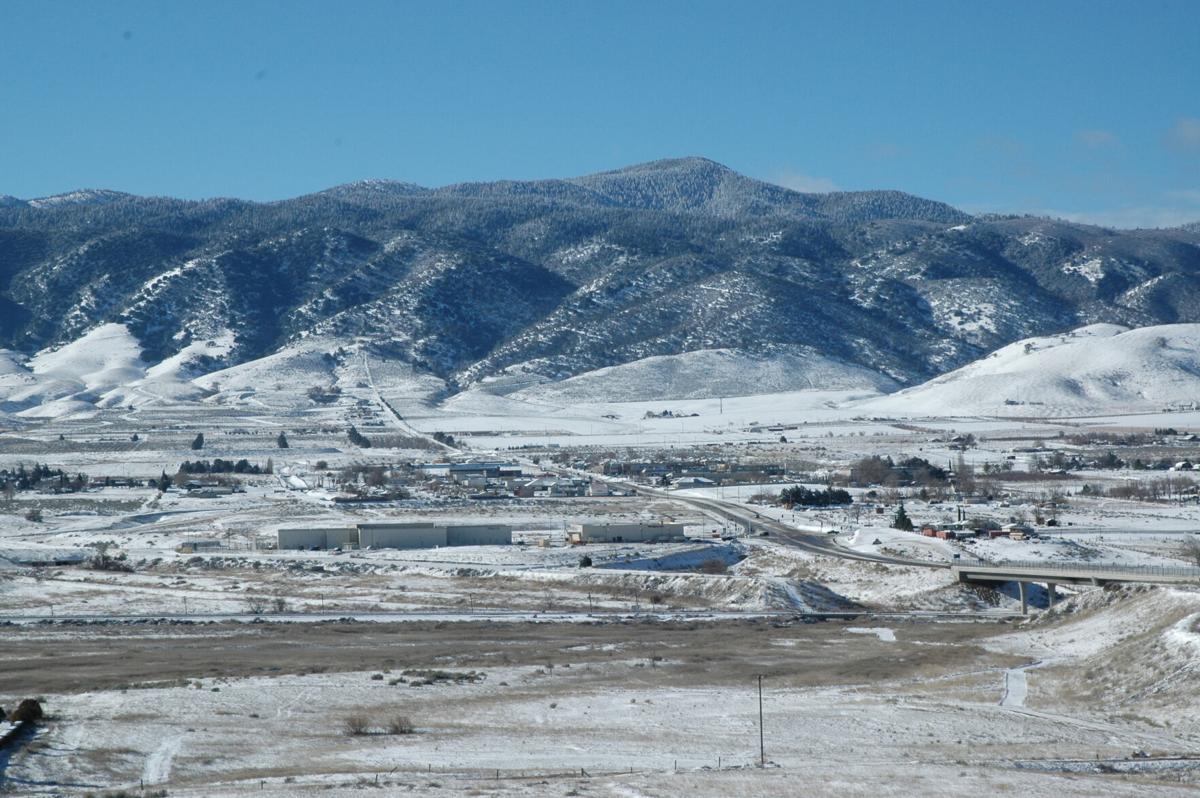 An old weather saying was "A year of snow, a year of plenty" because of the benefits from a cold, wet winter. 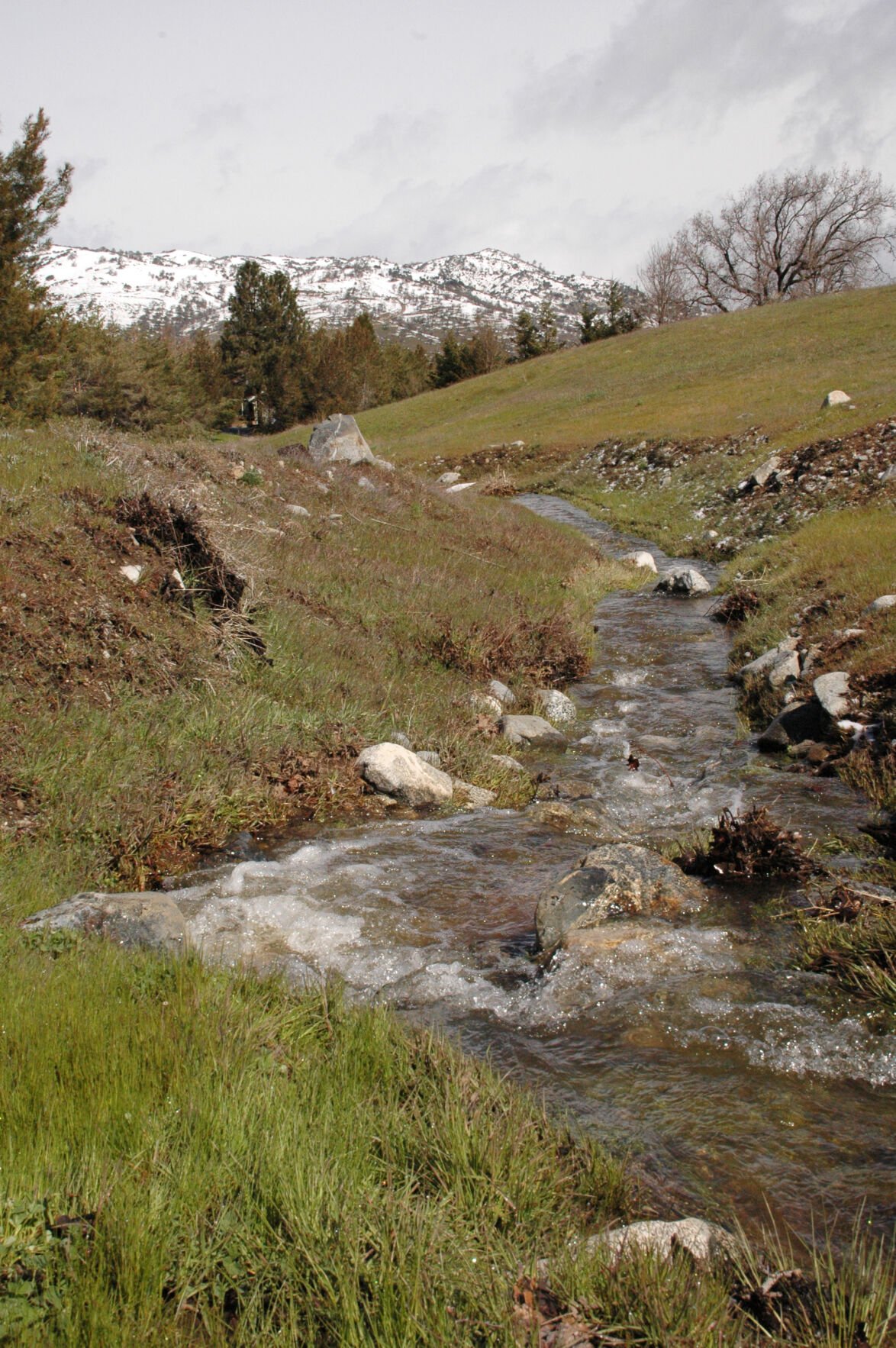 Snow brings good moisture to recharge our aquifers and bring our seasonal creeks back to life. 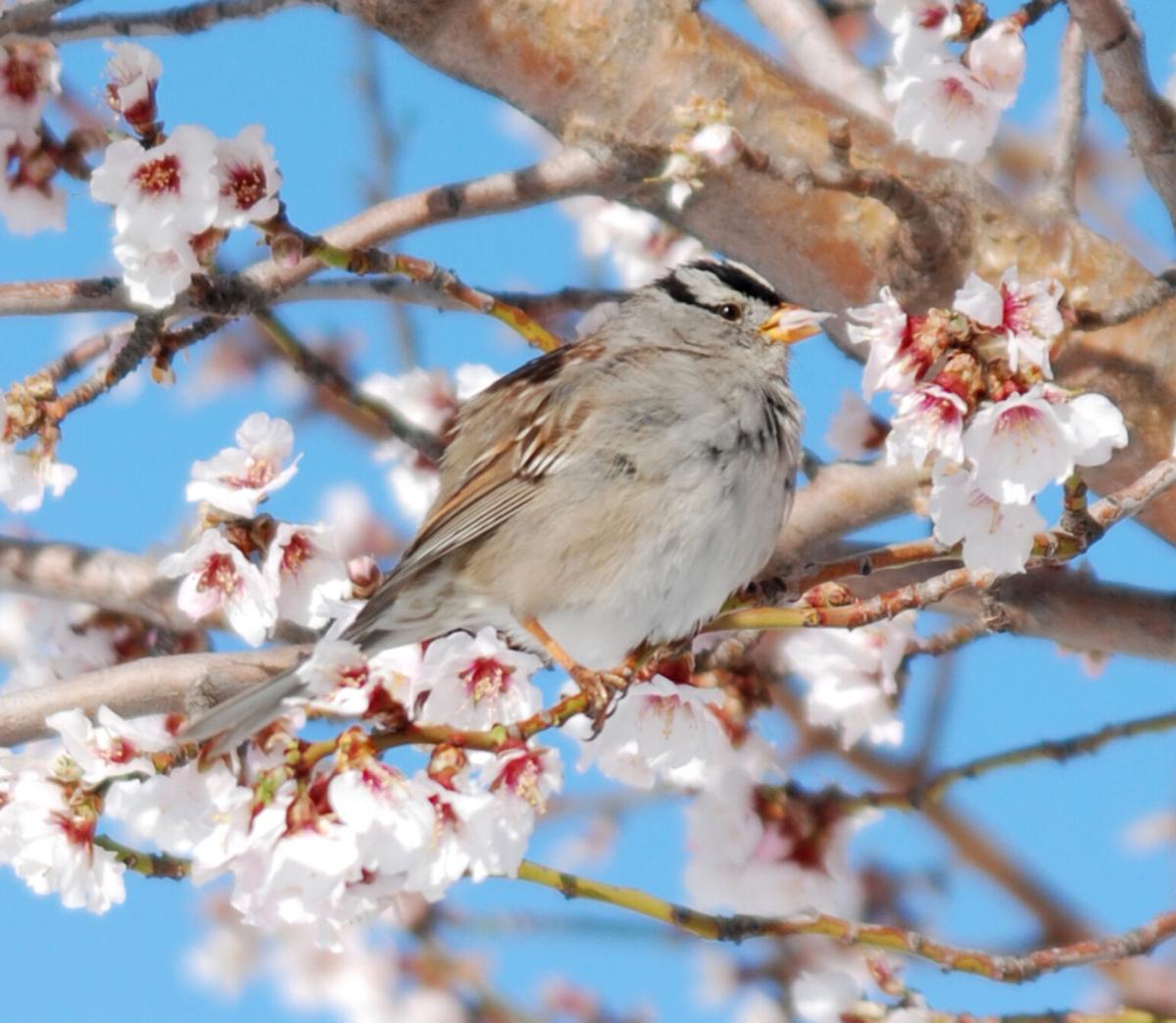 A White-crowned sparrow sampling some almond blossoms on a cold morning. Late spring frosts that can harm fruit blossoms has always been a concern for Tehachapi growers. 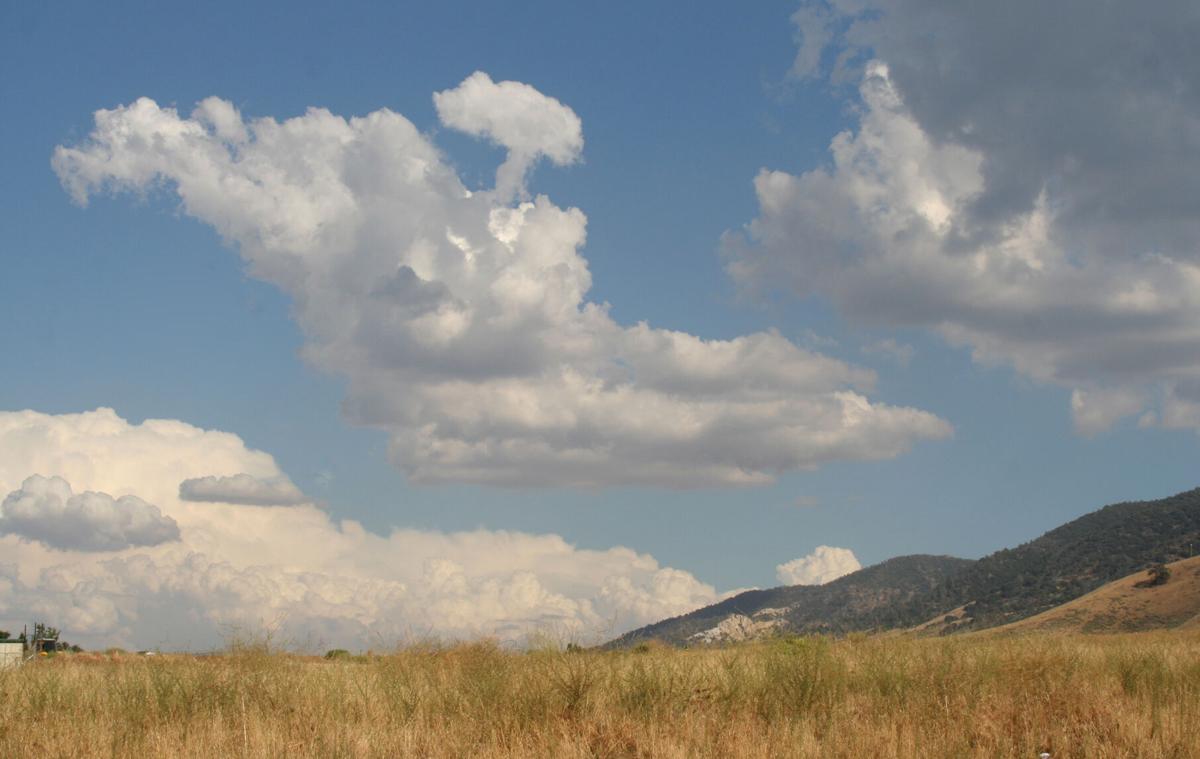 Puffy cumulus clouds in a summer sky. A truthful rule of thumbs is "Tehachapi weather doesn't stay the same longer than three days." 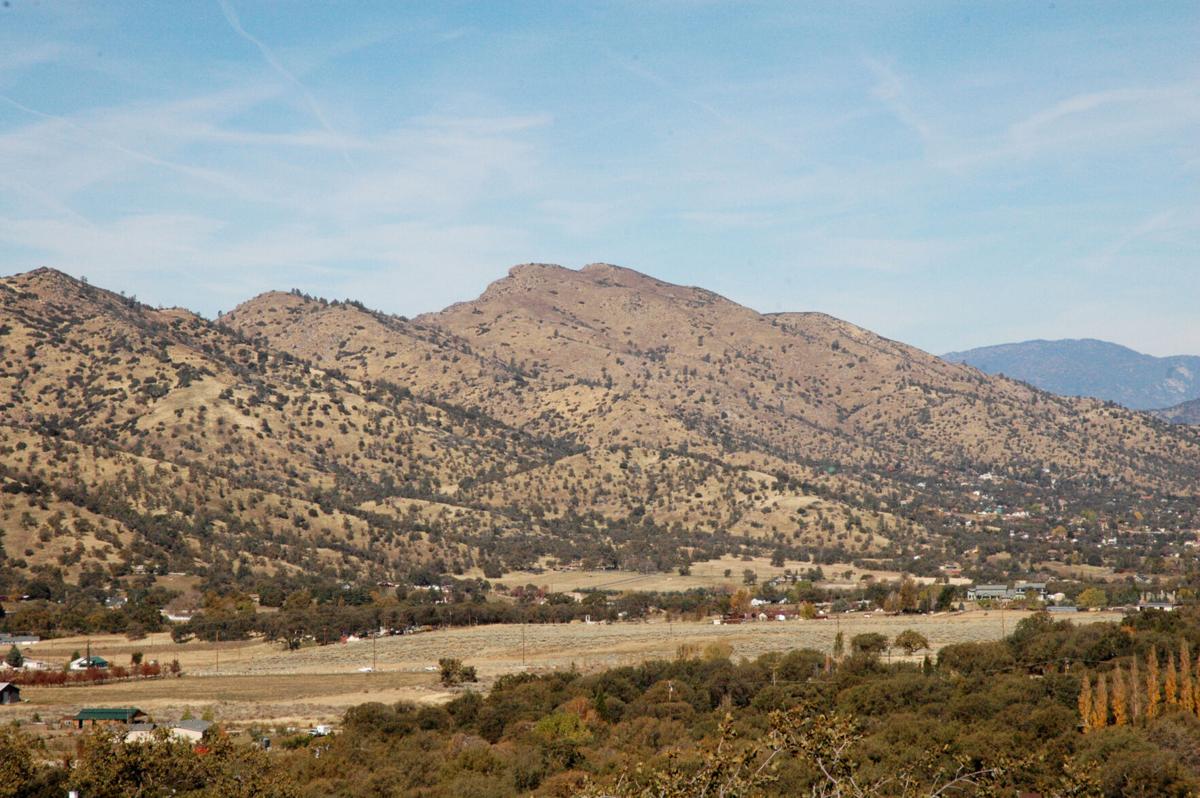 An old weather saying was "A year of snow, a year of plenty" because of the benefits from a cold, wet winter.

Snow brings good moisture to recharge our aquifers and bring our seasonal creeks back to life.

A White-crowned sparrow sampling some almond blossoms on a cold morning. Late spring frosts that can harm fruit blossoms has always been a concern for Tehachapi growers.

Puffy cumulus clouds in a summer sky. A truthful rule of thumbs is "Tehachapi weather doesn't stay the same longer than three days."

Humans have been trying to predict and understand weather for a long, long time. Meteorologists using science have now gotten amazingly good at it. But there is still truth to a lot of the old weather lore, which oldtimers used in the Tehachapi Mountains long before the National Weather Service arrived.

My grandfather was a shepherd and a horse teamster in Kern County beginning in 1898, and my great-uncle started farming here in 1921. My uncle, Henry Hand, was a Tehachapi farmer from the 1930s until his passing in 1988. They handed down weather lore that I have found both interesting and often accurate.

One of their observations is that "The weather in Tehachapi doesn't stay the same longer than three days." I have usually found this to be true. Storms, either rain or snow, break up and almost never last past the third day.

Even when it's just strong wind, the conditions seldom extend past the third day. Usually by the third day, the wind calms down or changes direction. Cold snaps rarely last more than three days, and neither do our hot spells in the summer.

Our prevailing wind blows from the west by northwest. The second most common wind comes from the east by southeast. Winds from the west typically bring cooling weather and higher humidity, since we're only a little over 100 miles as a raven flies from the largest body of water on the planet: the Pacific Ocean.

Winds from the east, on the other land, blow from inland, and come from the direction of the Mojave Desert. As a result, they tend to be warmer and drier, and often greatly raise the amount of static electricity in the air.

These dry winds, known as Santa Ana winds, among other regional names, can be very strong and create hazardous fire conditions. These east winds are responsible for most of the Public Safety Power Shutoffs that California has experienced the past two years.

Oldtimers who worked outdoors did not care for strong east winds. "This damned east wind," my uncle would say when it blew hard. "This east wind just makes me sick," my adopted grandpa and mentor Hooks Anderson would tell me.

Orchard growers pay close attention to spring frosts, because they can damage or even wipe out the year's fruit production by freezing the blossoms or tiny developing fruit. Growers also wouldn't want to put frost sensitive plants like tomatoes, cabbage or peppers out too early and have them get killed by a late frost. My uncle observed that "The locust blossoms never get hit by frost," so if the locust trees were in bloom, it was safe to put out transplants and you didn't have to worry about the fruit trees anymore.

A saying that has often proven true is "A year of snow, a year of plenty," because the slow release moisture from snow would help grasses, including grains like barley, wheat and rye, grow and lead to more feed and higher yields. The cold temperatures associated with snow would help keep fruit trees from blooming too early.

Other weather lore states that heavy dew in the morning indicates that the coming day will be dry. "When the dew is on the grass, rain will never come to pass" is a very old poem that expresses that observation.

My grandfather taught my uncle that when high cirrostratus clouds form a nighttime halo or ring around the moon, you count how many stars are visible inside the ring, and that will tell you how many days until rain. This is rooted in fact since thinner clouds with less humidity leave a larger ring with more stars inside, and thicker clouds with more humidity will form a smaller ring with fewer stars inside, suggesting fewer days until rain.

Another Tehachapi observation that I've mentioned before is that strong south winds, especially following rain or snow, which is when they usually occur, are tree-toppling winds. This is because our prevailing winds trend west and east, so those are the directions that trees develop their strongest anchor roots. When we have rare south winds, the trees are less prepared and if the ground is wet, or gophers have cut some off important anchor roots, the trees fall to the ground.

Weather lore is a rich and interesting subject, and it developed from centuries of observations made by people who spent much of their lives outdoors. I'll share some more of this weather wisdom in a future column.