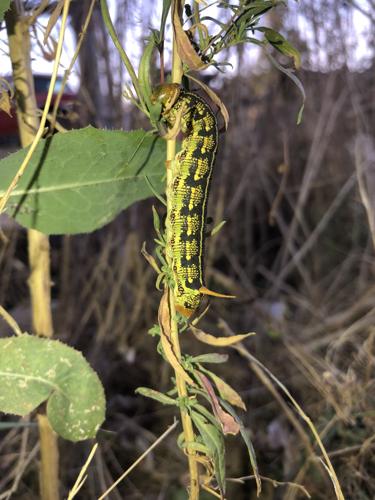 I saw this White-lined Sphinx Moth caterpillar feeding on a weed. Note the slender horn at the hind end. 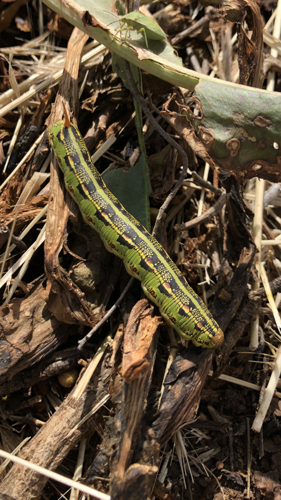 Sphinx moths show lots of variation in their patterns and markings. 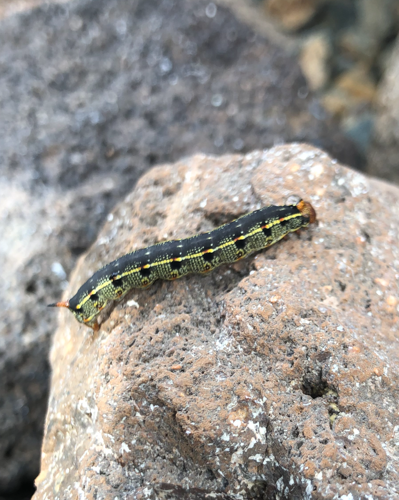 While most of the caterpillars are primarily green, this one looked mostly black. 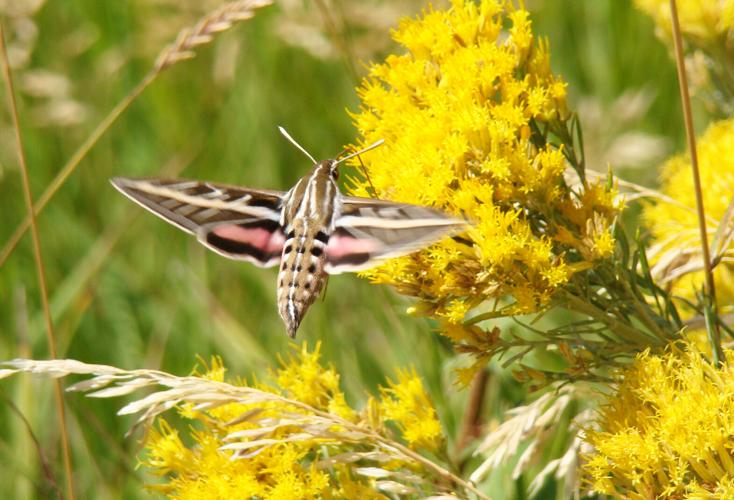 A White-lined Sphinx Moth feeding on Rabbitbrush, which are now in full bloom. 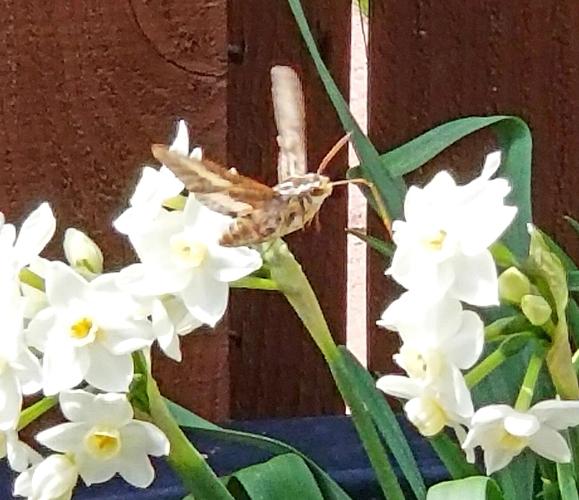 I saw this White-lined Sphinx Moth caterpillar feeding on a weed. Note the slender horn at the hind end.

Sphinx moths show lots of variation in their patterns and markings.

While most of the caterpillars are primarily green, this one looked mostly black.

A White-lined Sphinx Moth feeding on Rabbitbrush, which are now in full bloom.

This week I was somewhat surprised to find a couple of different caterpillars of the White-lined Sphinx Moth, still munching on vegetation or crawling around even as autumn has fully replaced winter.

We still haven’t had a killing frost yet, which is defined as 28 degrees Fahrenheit for two hours or more. At that prolonged sub-freezing temperature, water inside many plant cells will freeze and rupture the cell walls, resulting in a complete loss of any plants that don’t have natural antifreeze in their plant tissues to prevent this.

Most garden vegetables like tomatoes, or ornamental flowers like marigolds, don’t have this frost protection, and a hard freeze kills them utterly.

Not many invertebrates can survive a killing frost either. Many species only persist in the form of eggs laid down in the soil, which offers some protection from the coldest temperatures. In creatures like grasshoppers, for example, the entire adult population in colder locations perishes with the onset of frost, and only the eggs remain living to withstand winter and emerge the following spring to start the new generation.

Creatures like White-lined Sphinx Moths also seek the shelter of soil. When fully grown, these caterpillars will crawl in search of loose soil. They then burrow down, up to four inches deep, and they change from a caterpillar to a pupa, which is a dark reddish brown color and looks kinda like a tiny croissant roll.

In warmer weather, the caterpillar can metamorphose in a few weeks and crawl back up to the surface as a mature moth. Late season caterpillars like the ones I saw this week can stay underground for months until warmer weather arrives.

Adult White-lined Sphinx Moths are often referred to as hummingbird moths, because they hover in the air like a hummingbird and nectar-feed on blossoms. With their plump bodies, sphinx moths must beat their wings very quickly to stay aloft, so they do resemble hovering hummingbirds.

Sphinx moths are also sometimes referred to as hawk moths, especially in England, which makes sense, since they have no hummingbirds to inspire the reference – hummingbirds are unique to the Americas, and aren’t found on any other continent.

White-lined Sphinx Moth larvae or caterpillars vary widely in coloration and markings. Even the two that I saw in Tehachapi this week were similar but different. The caterpillars can appear to be mostly green, black or yellow. They have lengthwise stripes and some cross-hatching as well as tiny orange spots. These cryptic markings are intended to make the caterpillars harder to detect on vegetation, since they have many predators, including a number of bird species. They also have a soft slender spine curving up from their hind end like a rhino horn.

White-lined Sphinx caterpillars can feed on a variety of plants, including evening primrose, four o’clocks, farewell-to-spring, fuchsia, and a number of weeds. They can even feed on domesticated plants like grapes and tomatoes, though they are not the tomato worms that vegetable gardeners often loathe.

The larvae were traditionally roasted and consumed by some desert Native American tribes. Modern analysis has revealed that they contain more energy and protein than hamburger meat, though caterpillar burgers seem unlikely to dethrone hamburgers as the reigning favorites of American fast food.

While they are regarded as being mostly nocturnal, adult White-lined Sphinx Moths can be seen flying before dark, particularly late in the day or early evening. While the moths gravitate towards brightly-colored flowers during the day, at twilight and night they are more drawn to white or pale flowers, which are easier to see against the surrounding foliage.

It was once thought that sphinx moths found blossoms by primarily by smell, but later research found that they have excellent vision that they use to navigate and find food.

As the weather gets colder and a killing frost looms, the butterflies, moths and other invertebrates, as well as the annual flowers, are running out of time. Enjoy them while you still can.