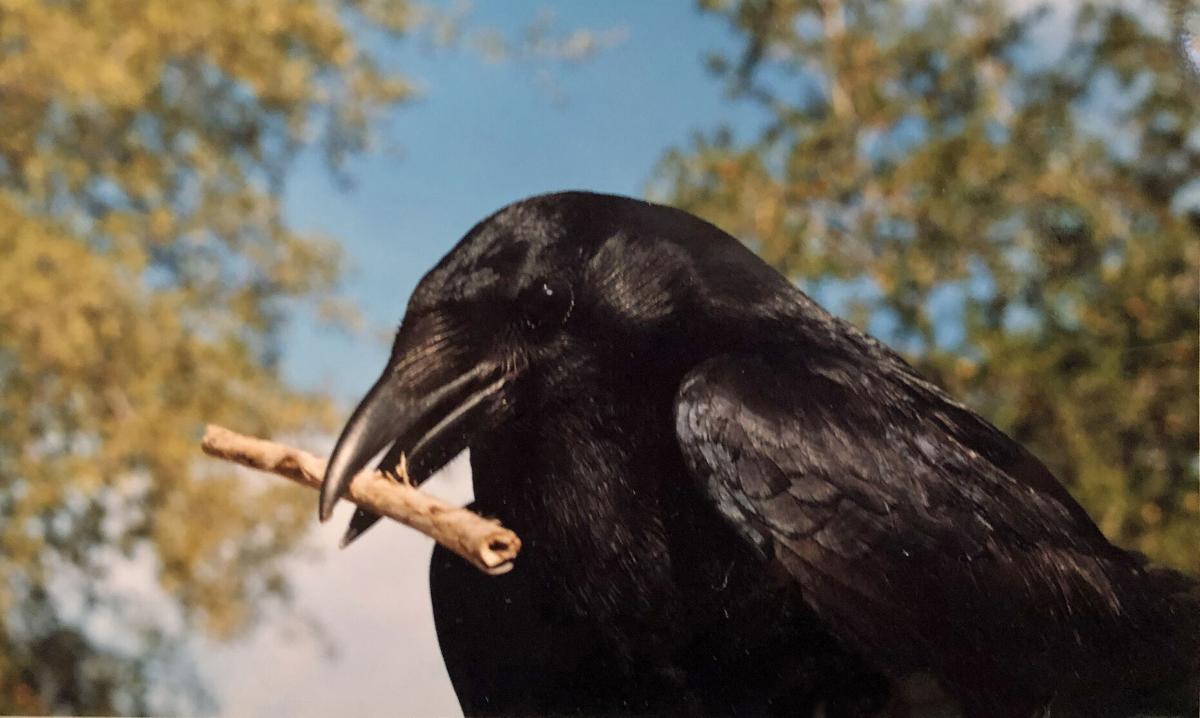 A young raven plays with a stick. 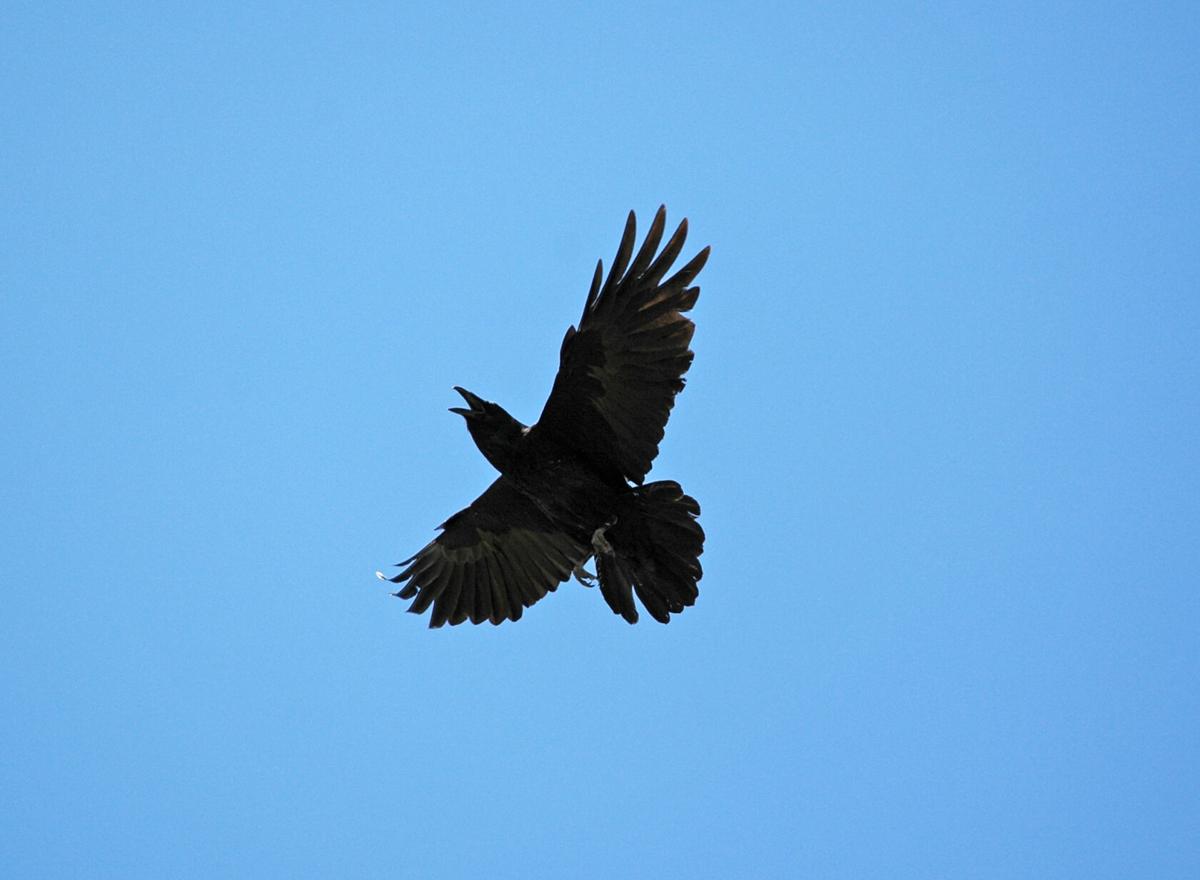 An adult raven in flight. Ravens are superlatives flyers. 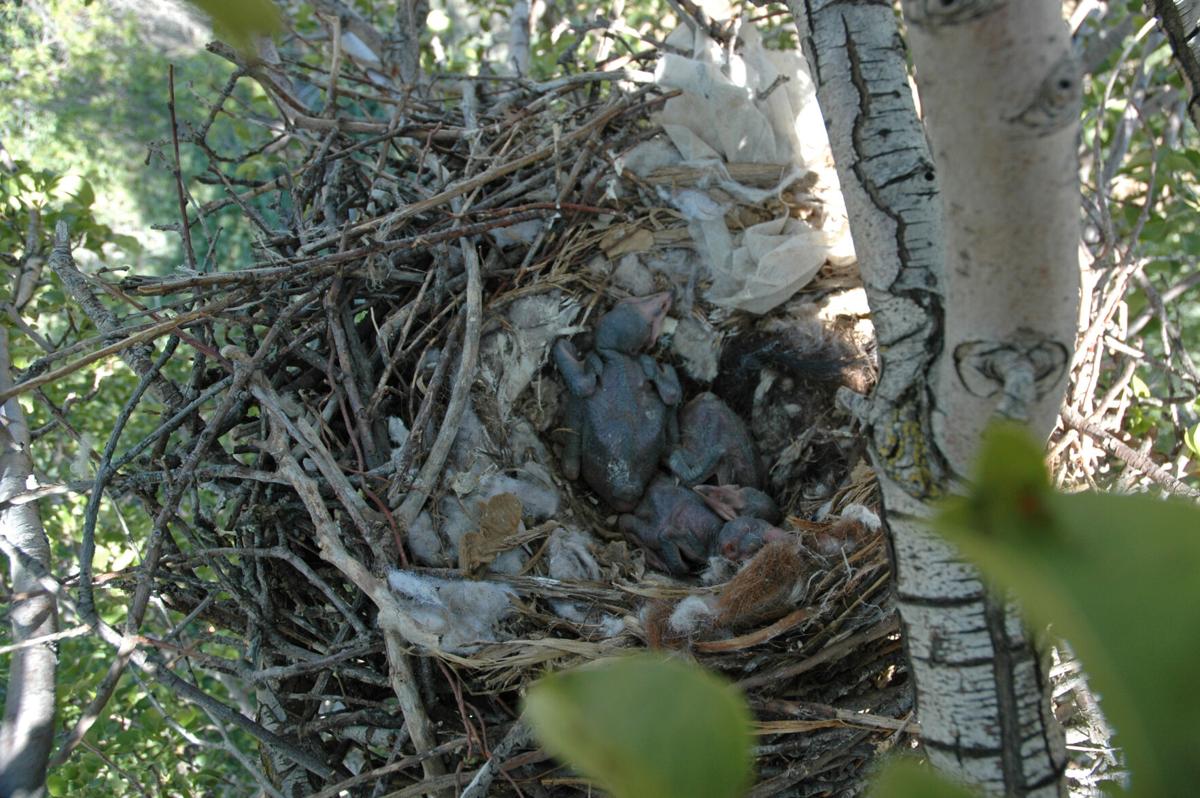 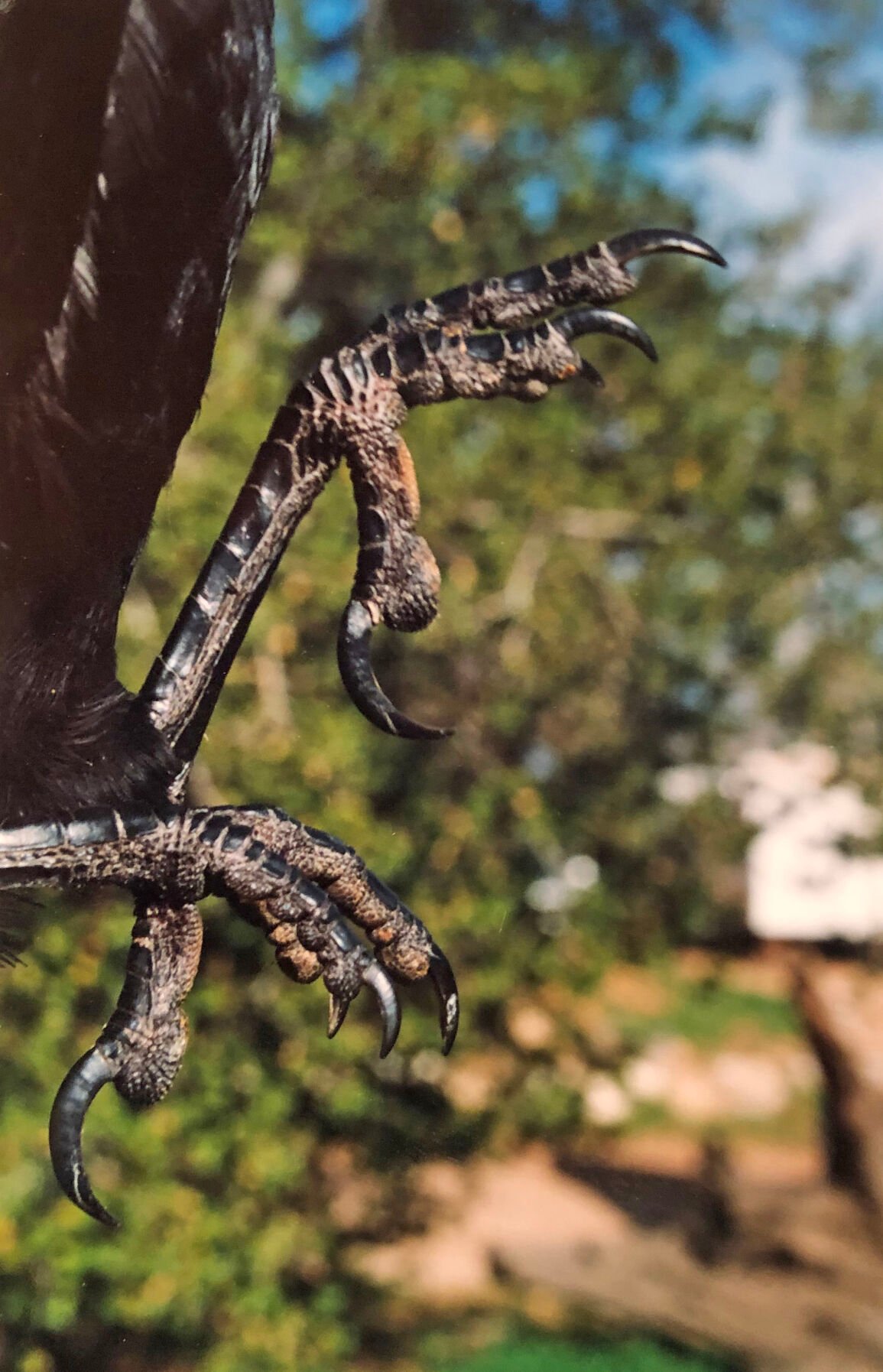 Though very large, a Common Raven is still technically a songbird (Passerine) and doesn't have talons like a raptor, though their feet are fairly strong and agile. 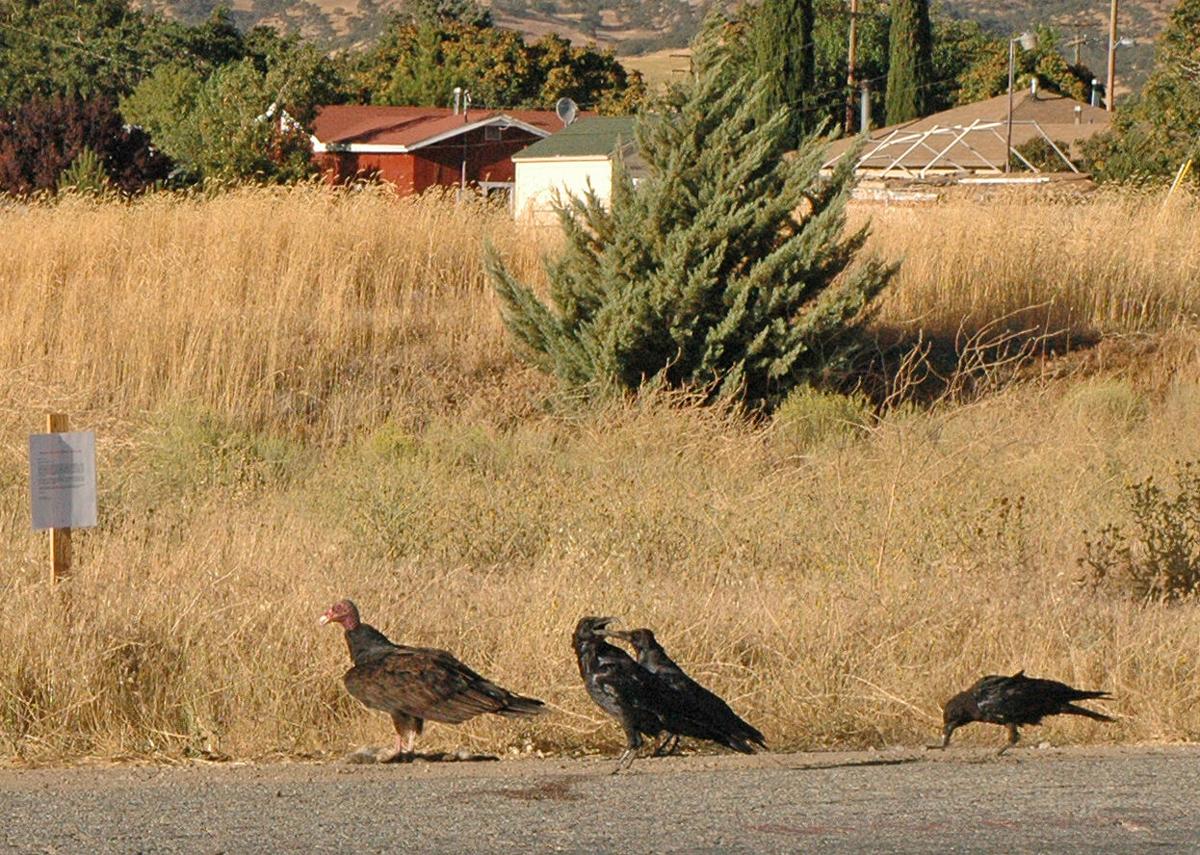 The Turkey Vulture at the left found a roadkill rabbit, but the ravens on the right are doing their best to convince the vulture that he should go look for something better.

A young raven plays with a stick.

An adult raven in flight. Ravens are superlatives flyers.

Though very large, a Common Raven is still technically a songbird (Passerine) and doesn't have talons like a raptor, though their feet are fairly strong and agile.

The Turkey Vulture at the left found a roadkill rabbit, but the ravens on the right are doing their best to convince the vulture that he should go look for something better.

"Ataakaz!" I heard a bird say from near the top of an old Deodar Cedar, as I walked out of the house into the bright September sunshine. I looked up at the large black bird, it looked back at me, then said its name again: "Ataakaz."

The bird was a raven, and it was saying its Nuwä name, which is Ataakaz. Many of the Nuwä (Kawaiisu or Southern Paiute) names for animals are onomatopoetic, meaning that their name is suggestive of a sound that they make. A Pacific Chorus Frog, for example, is Wogit, an approximation of their calls.

The Common Raven (Corvus corax) is named Ataakaz, pronounced ah-TAHK-ahz, for the rasping caw sound that they make. That's the call that I heard from atop the cedar tree last week — a raven saying its Indian name.

Ravens are exceptional birds in numerous ways. They are the smartest of birds, and they have even been documented using sticks as tools. Their intelligence manifests itself in numerous ways, as anyone who has spent time around them knows.

A study in Wyoming confirmed that ravens learned that during hunting season, a gunshot often indicated a deer or elk kill that might provide ravens with a gut pile to scavenge. So ravens would cautiously arrive to investigate a gunshot, but ignore other similar loud noises. Native hunters have told of ravens that would shadow them from a distance during a hunt as well.

I haven't seen ravens using sticks as tools, but I have watched young ravens playing games with sticks, tossing them with their bill, and then retrieving the stick like it was a prize.

I have also seen ravens in autumn gathering black walnuts, then flying up about 100 feet above an asphalt road, and dropping the nuts to the street below. This tends to crack open the hard shell, so the ravens could extract the nutmeat. I've even watched a dominant raven fly at another bird and get that raven to drop its walnut, and then the attacker caught it in midair — aerial piracy. Which is not uncommon in the bird world: older Bald Eagles, for example, frequently steal fish midair from younger eagles and even ospreys.

The late Marge Marantos used to feed butcher scraps and other food to both injured ravens that she cared for, as well as wild ravens in Cummings Valley. Marge told me that the ravens knew her vehicle and would come flying in when she arrived with scraps, but would ignore her husband George when he drove in — even if he happened to driving her vehicle. They learned that Marge was the lady with treats, not her husband.

Ataakaz has lived in the Tehachapi Mountains for thousands of years, and is likely to for thousands more. With their observant, keen dark eyes and long memories, ravens learn their surroundings well. And they learn how to best exploit food sources.

Temporarily leave a trash bag with food waste in it in the back of a pickup truck, or next to a house, and you're liable to come home to garbage scattered by sharp-eyed ravens. I've seen ravens that recognized McDonald's red cardboard French fry boxes, knew exactly what to expect inside them, and would home in and seize them first if they were among trash left near the top of a public garbage receptacle.

Our ravens don't migrate, the older birds form pair bonds for life and establish year-round territories. They stay here through the heat of summer and the cold of winter, using their superior flight abilities to fly even on the windiest days, when most other birds are hunkered down.

In Nuwä folklore, Ataakaz helped them get fire. The People saw smoke from a great distance, but didn't know what it was. The chief sent Ataakaz to investigate, and he was able to find that the smoke was coming from a fire up in the Panamint Mountains, where the only trees were at that time. Patsaazi (Bat) helped bring the fire back. It was raining, so Patsaazi put the fire under his wing to keep it dry.

Humans in the Tehachapi Mountains were once thinly scattered and moved about only on foot, then after many centuries, newcomers arrived on horseback and built houses. Eventually a railroad was completed and later people drove cars and built roads. Airplanes eventually arrived, as did thousands of homes and people. And still Ataakaz watches and learns, and continues to thrive. . .