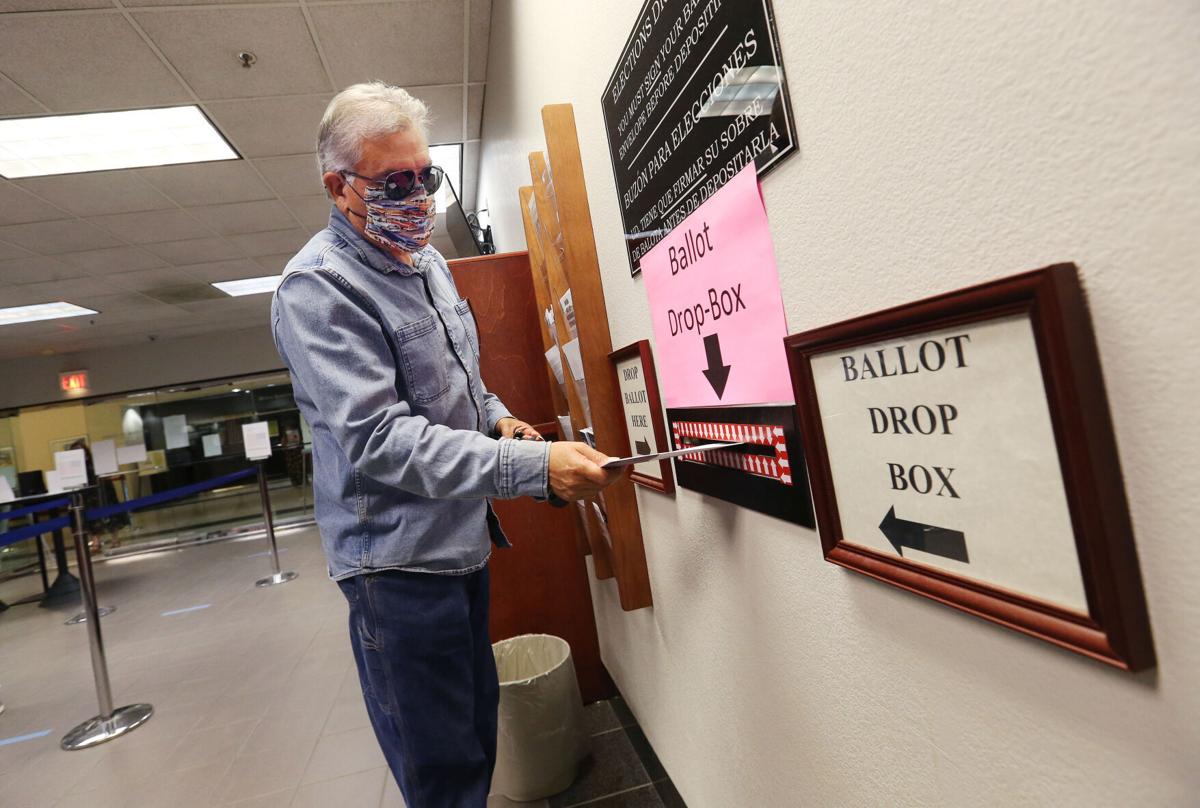 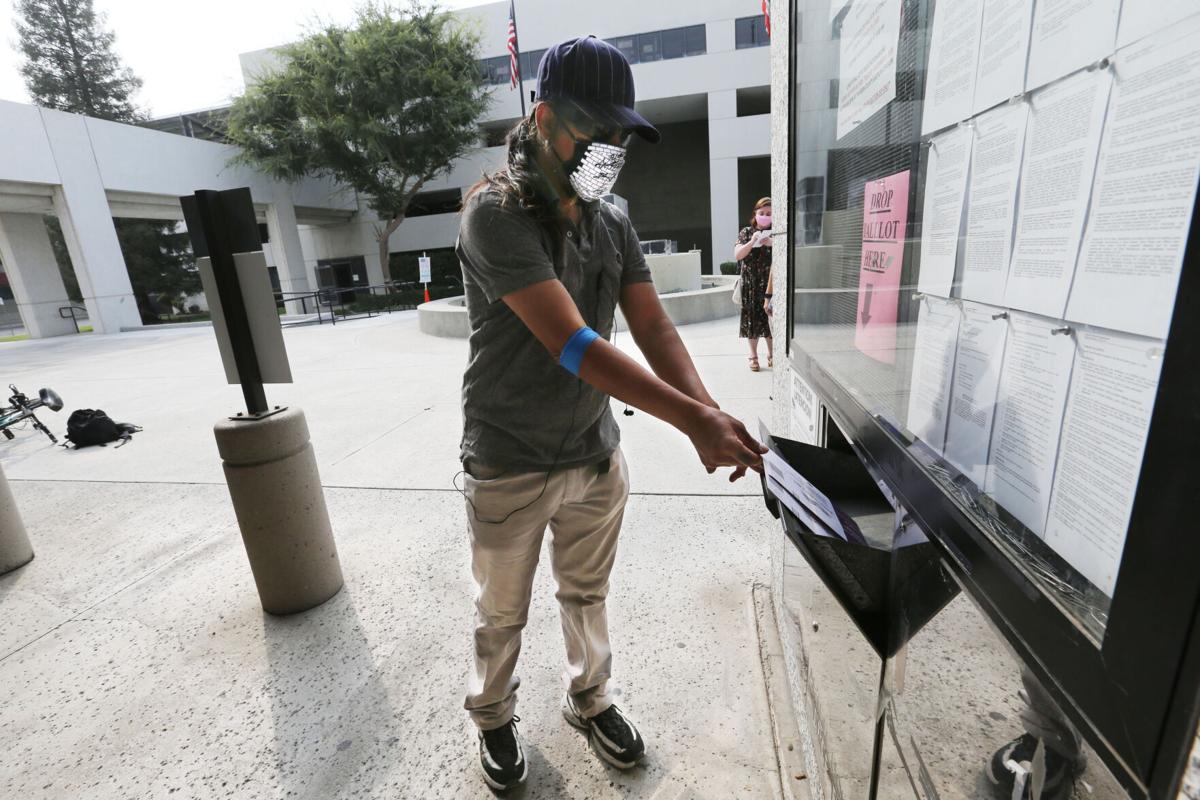 Darrell Rincon rode his bike to the Kern County Elections Division in downtown Bakersfield to get his ballot in early.

Darrell Rincon rode his bike to the Kern County Elections Division in downtown Bakersfield to get his ballot in early.

Last week voters in Kern County began receiving their ballots in the mail for the upcoming general election. A steady stream of them, mostly in face coverings to guard against the spread of COVID-19, hand-delivered their ballots directly to the Kern County Elections Division and the box outside the office in downtown Bakersfield.

“We want our votes to be counted,” said Trish Mills, who dropped off her ballot with her husband, Mike.

Mills and her husband are just two of many who typically vote absentee but decided to take the extra step of driving to Truxtun Avenue to hand deliver their ballot. But this isn’t a typical year.

She’s not alone. Some voters this year say they’re concerned about their vote being delivered at all or being delivered on time to the Kern County Registrar because of worrisome reports they’ve seen or heard, particularly about the U.S. Postal Service. Postmaster General Louis DeJoy instituted cost-cutting measures this August, later suspended, that caused slowdowns in the mail system across the nation.

“I hear a lot of things,” said Margarita Perez. “That it might be late or lost.”

Jessie and Troy Goldenbee were also worried about mailing in their ballots, though their concerns about the mail were a bit more local. She said they have a community mailbox that periodically gets broken into.

“We don’t want to take any chances,” Troy said. “The election is too important.”

Mary Bedard, Kern County Auditor-Controller-County Clerk, who oversees local elections, says that the county has always allowed voters to drop their votes off at the elections office, but this year the county has expanded the number of places where voters can return their ballots.

On the last three Saturdays of October, voters who are anxious about the mail but don’t want to wait until Election Day will be able to hand-deliver their ballots to Bakersfield College, CSUB and select Kern County Library branches throughout the county staffed by poll workers. Voters who need assistance can also come to satellite offices set up in the two weeks before the election.

“This year we are offering many options to voters so they can feel comfortable that they are voting safely and securely,” she wrote, in an email.

She wrote that the ballots deposited at curbside events and satellite offices will be brought back to the Election Office by the poll workers at the end of the day, where they are kept in a secure vote-by-mail room.

This year was the first time all registered California voters were sent a mail-in ballot. Gov. Gavin Newsom issued an executive order in May mandating that every voter be sent a mail-in ballot, in addition to offering in-person voting locations. The decision was made in May because it was “unknown to what degree COVID-19 will pose a threat to public health in November.”

Shannon Summers was a veteran absentee voter who found the process more convenient, but she said she didn’t like that she was automatically receiving a mail-in ballot. She said she was hand delivering her ballot, because she had heard reports of ballots being thrown in the gutter or trash.

“I wanted to be sure my vote was counted,” she said.

Reggie Smith said he wanted to get his vote in and counted early.

Voters who haven’t registered still have time: The last day to register is Oct. 19, or voters can register conditionally after that.

Election Day is still a fine time to vote, Bedard says. Poll workers will be following CDC guidelines. And voters who would prefer not to go inside or who do not wear a mask will be able to do curbside drop off of mail ballots at some poll sites.

And those who do drop it in the mail just need to make sure it’s postmarked by Election Day: Nov. 3.

For more information about the election, visit https://www.kernvote.com/ElectionInformation.

Last Day to Register to Vote at the Polls: Oct. 19

Conditional Voter Registration in the Elections Division and Satellite Offices: Oct. 20 through Nov. 2

The Kern County Elections Division is located at 1115 Truxtun Ave. 1st Floor in Bakersfield. At the south entrance to the building, there is a drop-off box for mail-in ballots outside the building and one inside.

There will also be satellite election offices, which will not only be available for drop-off of mail ballot but for voter assistance. This includes the replacement of lost or spoiled ballots, conditional voter registration and language or accessibility assistance. This is the tentative schedule:

Frazier Park Library on Tuesday, Oct. 20 from noon to 6 p.m.

Ridgecrest Library on Friday, Oct. 23 from noon to 6 p.m.

Rosamond Library on Wednesday, Oct. 28 from noon to 6 p.m.

Ridgecrest Library on Friday, Oct. 30 from noon to 6 p.m.