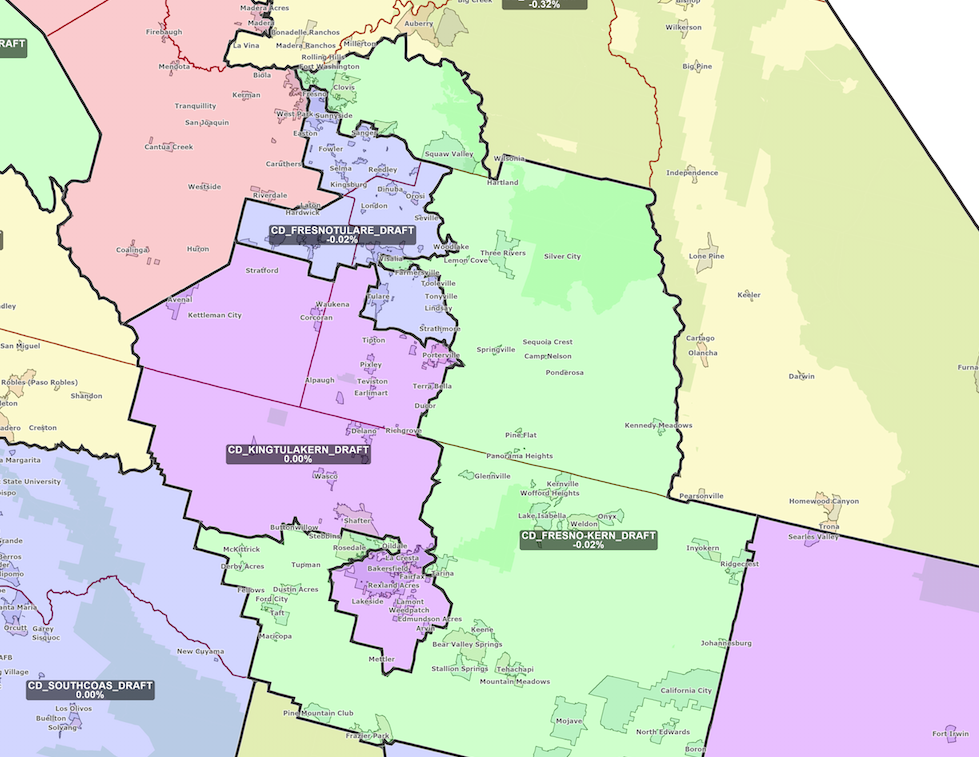 Proposed congressional map of the Bakersfield and Fresno area. 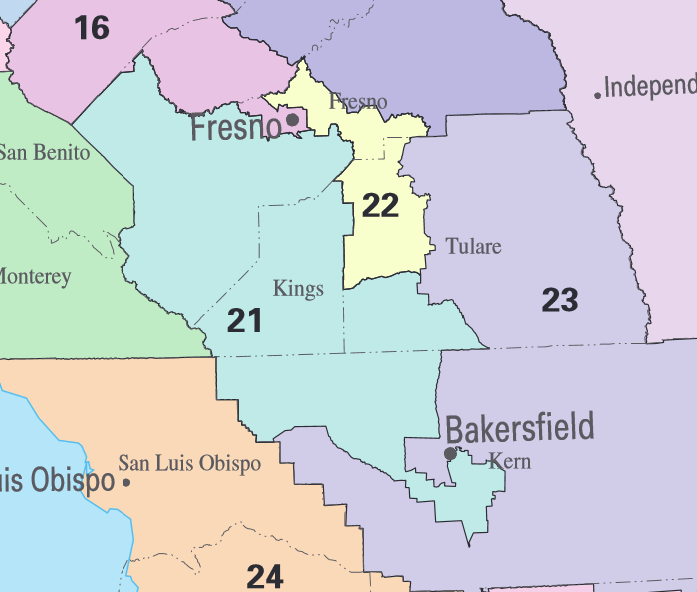 Proposed congressional map of the Bakersfield and Fresno area.

The California Citizens Redistricting Commission will soon make a decision on legislative boundaries that will shape California politics for the next 10 years. But as the commission approaches its decision, Central Valley advocates on both sides of the aisle have raised red flags about the proposed maps impacting the Fresno and Bakersfield area.

If the commission adopts the new maps unchanged, advocates worry southern Central Valley residents will be poorly represented by the politicians that inevitably get elected. The flashpoint has become the proposal for the new congressional districts, which would see three nominally Latino majority districts created in the Central Valley, but would also place communities together in ways that don’t make sense.

What do Oildale and Rosedale have in common with northern Fresno? Well, under the proposed congressional map, the district now represented by Rep. Kevin McCarthy, R-Bakersfield, would encompass both areas.

Do Delano and the Seven Oaks community in Bakersfield have much in common? Under the proposed map, both would be represented by the same congressperson, an arrangement advocates say serves both communities poorly.

Furthermore, the new map splits Fresno into three districts when it is now bisected into two, something that could dilute the overall political influence of the city.

“Partisan-wise it doesn’t change very much,” said Tony Quinn, a former Republican consultant with extensive experience with redistricting. “It’s just not a good way to do it.”

He noted all local congressmen with the exception of Devin Nunes, R-Tulare, would see little change to the makeup of Democrats and Republicans within their districts. Still, the makeup of the districts opens up the possibility that some communities will be represented by a politician who lives far away and has little familiarity with the area.

“It doesn’t do you guys any good for you to have your state senator from northern Fresno,” Quinn added. “There’s no way to put north Fresno with western Bakersfield in both the Senate and in Congress. I don’t know why people in your area haven’t complained about it.”

Only one of the 14 redistricting commissioners is from the Central Valley. That person, Trena Turner, is from Stockton. Advocates say this leaves the commission unfamiliar with the southern portion of the valley, which contributed to the disorganized boundaries in Fresno and Bakersfield.

“What’s common knowledge to you and me is other-planet-level strange to them,” said Lori Pesante, director of civic engagement and government relations at the Dolores Huerta Foundation. “We have to break it down for them so they understand where we’re coming from.”

Pesante and the Dolores Huerta Foundation worry about the way in which the proposed congressional map potentially whittles down the political power of Latinos across the Central Valley. Under the current proposal, Pesante says, the boundaries restrict the ability for Latinos, who are more than 50 percent of the population in all Central Valley counties, to elect candidates of their choice.

“The commission has already identified the Central Valley as an area where if they don’t get it right, not only will they be running super high risk of litigation, but they will be disenfranchising protected classes,” she said.

Even the Kern County Farm Bureau has objected to the proposed district boundaries, claiming the boundaries dilute the voice of the local agriculture industry.

“We strongly encourage the Commission to consider the adoption of maps that recognize the significance of Kern’s agriculture, that does not dilute local agriculture’s ability to speak and be heard in a unified voice,” Executive Director Romeo Agbalog wrote in an email to The Californian, “and allows us to be represented by an individual that resides close to home and understands the uniqueness and complexities of Kern’s ag industry.”

The commission plans to take on the congressional boundaries next week before final approval on Dec. 26. Commissioners are meeting each day for the next few weeks to discuss the maps. Information on attending the meetings can be found on wedrawthelinesca.org/meetings.

Public input may also be submitted through the website.

"Commissioners are aware of concerns," said Fredy Ceja, director of communications for the Citizens Redistricting Commission. "They get feedback in real time. When drawing maps, commissioners must follow a set of weighted criteria. The first is ensuring all districts have equal population. The second is compliance with the Voting Rights Act (VRA). In the case of Fresno, they sought to protect VRA communities. They have since revisited the area to produce additional options."