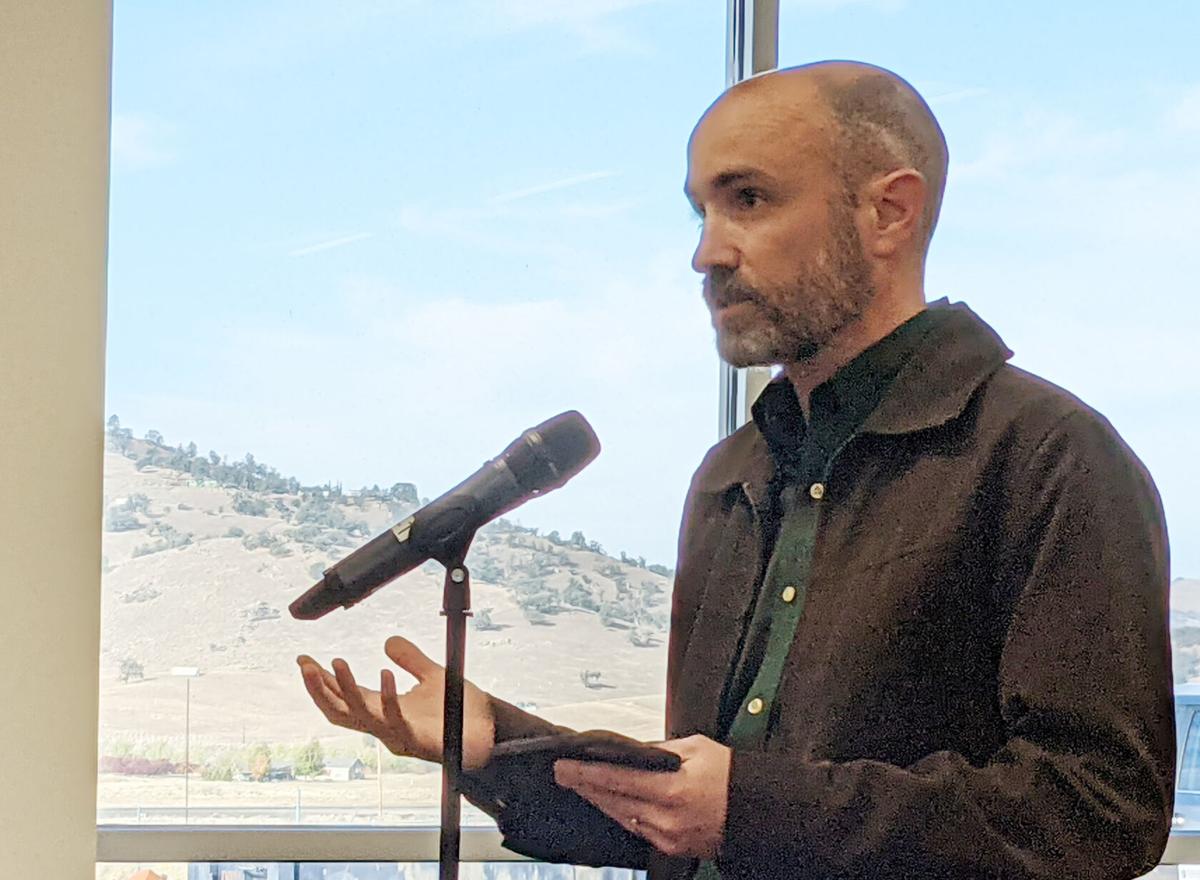 Addressing the board of the Tehachapi-Cummings County Water District on Oct. 20, Development Services Director Jay Schlosser of the city of Tehachapi asked if it has considered changing its policy about serving agricultural customers. 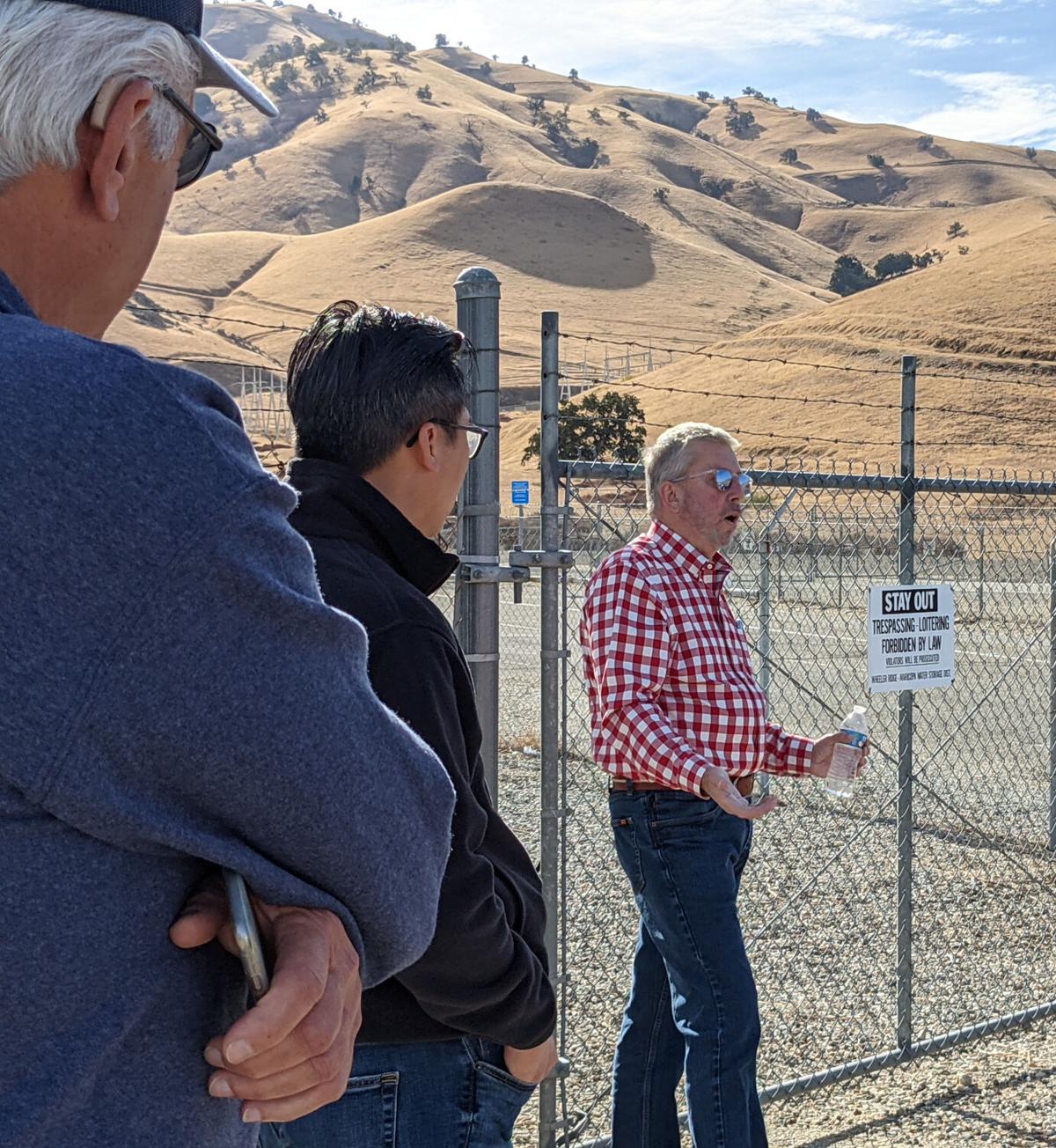 General Manager Tom Neisler, right, addresses attendees during a tour of Tehachapi-Cummings County Water District pumping facilities on Oct. 21. With him, from left, are Rick Zanutto, a member of the district board, and Assemblyman Vince Fong. 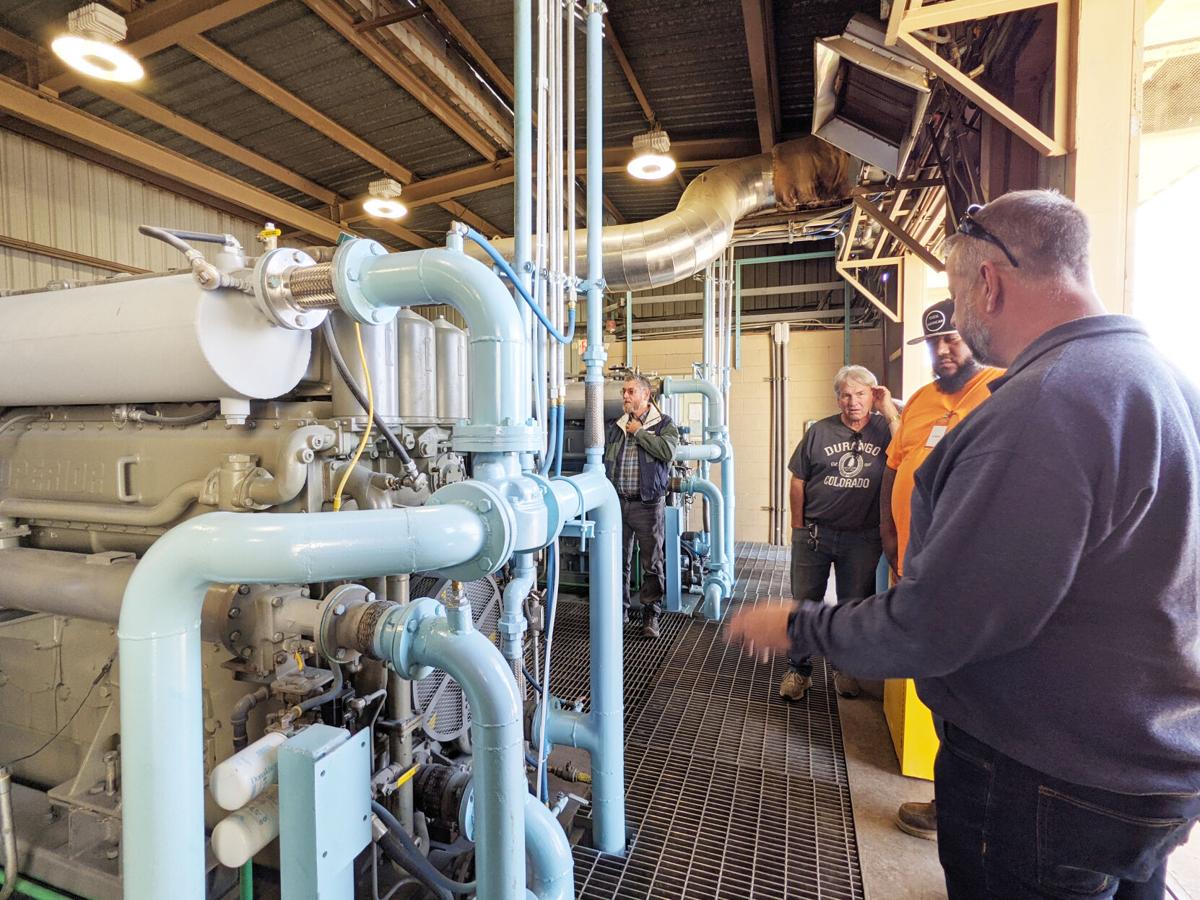 Community members got a chance to see the giant pumps that bring water from the State Water Project to Tehachapi during a tour sponsored by the Tehachapi-Cummings County Water District on Oct. 21.

Addressing the board of the Tehachapi-Cummings County Water District on Oct. 20, Development Services Director Jay Schlosser of the city of Tehachapi asked if it has considered changing its policy about serving agricultural customers.

General Manager Tom Neisler, right, addresses attendees during a tour of Tehachapi-Cummings County Water District pumping facilities on Oct. 21. With him, from left, are Rick Zanutto, a member of the district board, and Assemblyman Vince Fong.

Community members got a chance to see the giant pumps that bring water from the State Water Project to Tehachapi during a tour sponsored by the Tehachapi-Cummings County Water District on Oct. 21.

Many local people check weather forecasts for Tehachapi as they prepare for their day. But Tom Neisler looks northward, checking to see what Mother Nature might be bringing to Oregon.

As general manager of the Tehachapi-Cummings County Water District, Neisler knows that local water fortunes depend in large part on weather systems moving out of the Pacific Northwest toward Northern California and specifically the Feather River Basin.

That’s because the water that is eventually delivered to the district and other water agencies from the Bay Area to San Diego by the State Water Project begins with precipitation — rain and snow — in the Feather River watershed. The four forks of the river flow into Lake Oroville, the second-largest reservoir in the state. From there, the water flows through rivers and the California Aqueduct to San Luis Reservoir west of Los Banos. Eventually, also via the aqueduct, the water reaches a spot near the base of the Grapevine where the district’s pumps begin to lift it 3,425 vertical feet toward Stallion Springs. Water is then piped across the Cummings Valley to Jacobsen Reservoir, also known as Brite Lake. The local pipeline carries the water further, across the Tehachapi Valley to Willow Springs Road.

Neisler knows this story by heart and can tell it in much greater detail. And lately, he’s hopeful that predictions of a major weather system bringing significant rain and snow out of Oregon this week will come to pass.

On Oct. 21, the water district hosted a tour of its pumping facilities and Neisler shared the story of Tehachapi’s water with several dozen people. Typically, the tour has been held in the spring when it would be hard to hear his voice above the roar of the gigantic pumps moving water up the hill. But two spring tours were canceled because of COVID-19 concerns, so the recent tour was the first since 2019. And the pumps were silent last week because the pumping season is over. When they will be used again — and how much water they will bring to Tehachapi — remains to be seen.

Although the first official announcement of how much water the SWP will allocate to each district next year isn’t expected until December, the continuing drought has raised alarms. It’s possible no water will be delivered next year.

California’s water year runs from Oct. 1 through Sept. 30. The most recent water year was the second driest on record, leaving reservoirs astoundingly low.

“Nothing in our historic record suggested the possibility of essentially that snow disappearing into the soils and up into the atmosphere at the level that it did,” California Natural Resources Secretary Wade Crowfoot said in a recent call to reporters. “These climate changes are coming fast and furious.”

And Department of Water Resources Director Karla Nemeth issued a dire warning to water managers throughout the state — the extraordinarily dry conditions may result in the project’s first-ever 0 percent allocation.

Locally, Neisler has been sounding the alarm for months.

On Aug. 16 he advised the Tehachapi City Council not to approve the Sage Ranch residential subdivision with a plan to build 995 residential units over the next seven years and to revise the related Water Supply Analysis and Environmental Impact Report. The city based the WSA on a long-term average of 60 percent of SWP water to the water district, which is the same percentage used in the SWP Reliability Report. Last year the initial allocation for SWP contractors was 10 percent but it was lowered to 5 percent in March.

“We are in the midst of the worst drought in recorded history,” Neisler wrote in a letter to the council. “There is no indication of how long it may last. Severe curtailments of current deliveries are being considered.”

The council stood with its staff assessment that the Final EIR and WSA for the Sage Ranch Project complies with all statutory and regulatory requirements under the California Environmental Quality Act and gave final approval to the project on Sept. 7. As previously reported, the water district filed suit on Sept. 16. The parties are scheduled to hold a CEQA required settlement meeting on Nov. 3.

At a meeting of the TCCWD board on Oct. 20, Neisler presented his first water supply outlook for 2022. This included a brief summary of water use in the year that ended Sept. 30. He said a more detailed report will be available around February 2022 as part of the district’s annual reporting to Kern County Superior Court. Court action — commonly referred to as adjudication — was sought soon after the formation of TCCWD by voters in 1965. The district is required to make annual reports to the court for the Tehachapi and Cummings basins.

Noting that his outlook report is preliminary and subject to revision, Neisler said Brite Lake reached its lowest level on Sept. 26 at 478 acre-feet of storage. It has since recovered to almost 600 acre-feet, he said.

The district’s importation system was shut down on Aug. 23 after importing 3,949 acre-feet of an available 3,965 acre-feet last year, Neisler said. He noted that this included 965 acre-feet of water allocated for 2020-21 by the SWP. The remaining 3,000 acre-feet brought up the hill last year was from water the district previously banked in the San Joaquin Valley, largely during the last very wet year (2017).

Going into 2022, the district has about 190 acre-feet banked in the San Joaquin Valley and less than 20 acre-feet of carryover water in San Luis Reservoir, he said. When available, the district uses SWP water for groundwater recharge but was only able to recharge 2 acre-feet in 2021, he noted.

To meet the needs of agriculture, municipal and industrial (M&I) and “wheeled water” customers, in 2021 the district drew about 1,583 acre-feet of water from water previously banked in the Cummings and Tehachapi basins, Neisler said. (Wheeled water is water that is pumped from the Native Safe Yield of the basin by the district — rather than by the rights holder — and typically delivered via the district pipeline for a fee).

M&I customers include the city of Tehachapi and the three community services districts with water systems — Bear Valley Springs, Golden Hills and Stallion Springs. Each of those entities provides customers with pumped groundwater and buys water from the district both to supplement available groundwater and for basin recharge (to create a bank for dry years).

Addressing the board after Neisler’s presentation was Development Services Director Jay Schlosser of the city of Tehachapi.

With the “vast majority of banked water supply” going to ag customers, Schlosser asked if the district has considered a policy change.

“I think it’s a fair question,” he said.

Board President Robert Schultz’s answer was short: “At this time, no.”