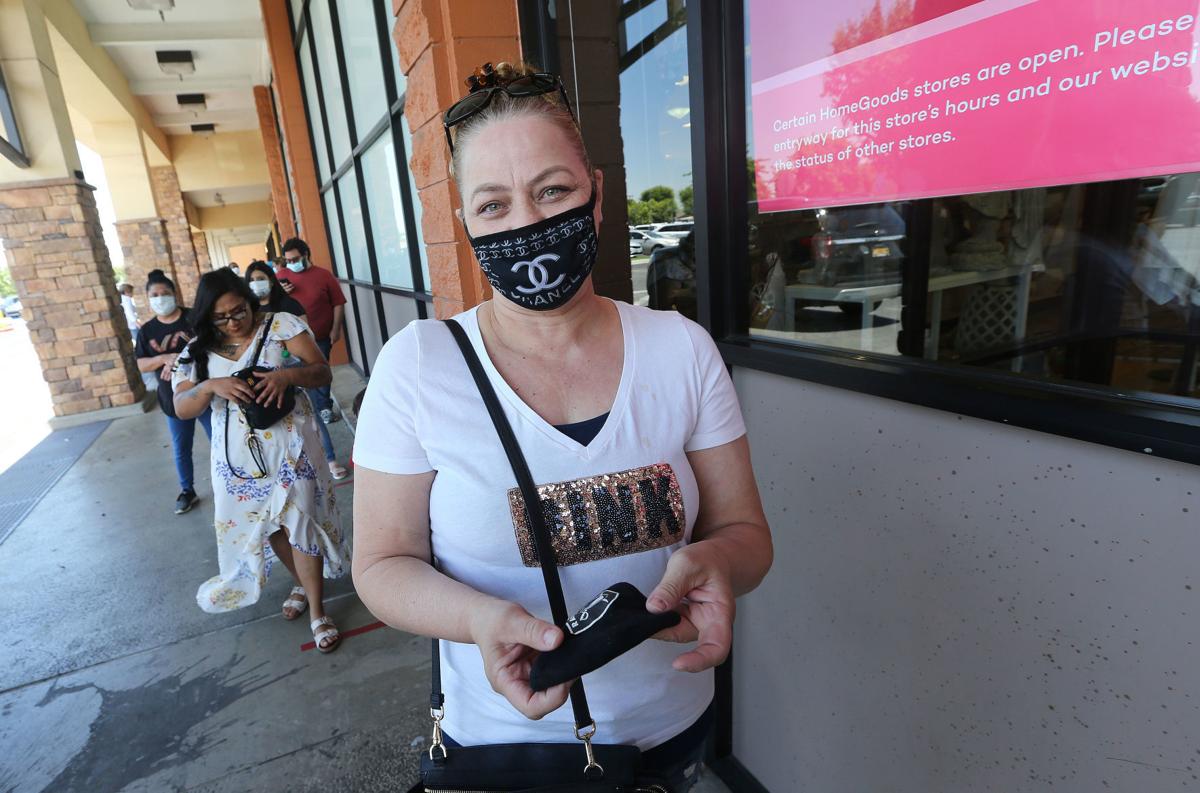 Shelly Cortez of Palmdale, standing in line Friday afternoon to enter a store in southwest Bakersfield, shows one of the spare masks she carries in her purse. Cortez said she keeps them handy in case one of hers falls to the ground or she comes across someone in need. 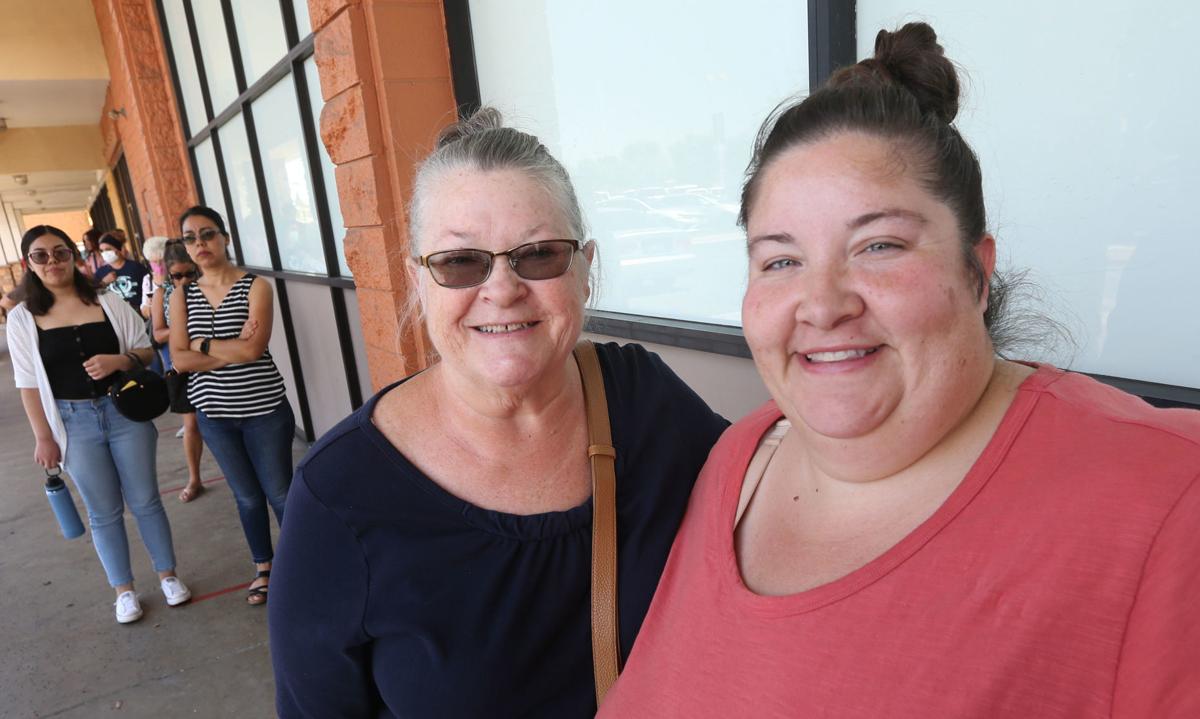 Regina Frost, left, and Keri Frost of northwest Bakersfield said they don't feel comfortable in masks and don't like the idea of a store denying them entry if they don't wear one. "It's my risk," Regina said. "I'm taking it."

Shelly Cortez of Palmdale, standing in line Friday afternoon to enter a store in southwest Bakersfield, shows one of the spare masks she carries in her purse. Cortez said she keeps them handy in case one of hers falls to the ground or she comes across someone in need.

Regina Frost, left, and Keri Frost of northwest Bakersfield said they don't feel comfortable in masks and don't like the idea of a store denying them entry if they don't wear one. "It's my risk," Regina said. "I'm taking it."

The line outside the HomeGoods store on Stockdale Highway in Bakersfield on Friday afternoon presented a kind of cross-section of local attitudes toward what seemed an unsettled question of whether people should wear face masks in public to help slow the spread of COVID-19.

Though everyone dutifully observed social distancing guidelines, some donned face coverings and some didn't as they waited to get into a store with a sign out front saying it "expects" shoppers to use masks.

The bare-faced among them objected to the discomfort masks can bring — and questioned their usefulness — while the masked ones said they were covering up for everyone's sake. One said it's unacceptable to walk around in public without a mask.

Face masks have become a visible social divide central to the contentious and high-stakes quarantine.

At issue, public health officials say, is success against an insidious disease that could, if things were to spin out of control, overwhelm hospitals' ability to treat the sick.

But for many, masks feel like an annoyance and even a threat to their personal right to go about their lives as they wish.

Regina Frost and her daughter Keri Frost, of northwest Bakersfield, waiting in line at HomeGoods on Friday, said they consider masks irritating and at best a false sense of security against the virus's spread.

Both balked at the idea of being denied entry to a store if they won't wear one.

A few people away in line, Donna Beckman steered a center course. She wore a mask primarily to protect people around her, she said, but left it to others to decide for themselves whether to cover up.

"If you don’t, it's your right," the central Bakersfield resident said. "Do what you want to do."

Local public health authorities have been consistent but not forceful. Kern County government's official guidance remains that people should wear face coverings in public when groups are in close contact for sustained periods and normal social distancing measures cannot be applied.

"What's even more important,” county Chief Administrative Officer Ryan Alsop said by email, "is remaining vigilant and aware that COVID-19 is in our community and spreading, practicing regimented, thorough and frequent hand washing, not touching surfaces in public settings, avoiding touching your eyes, nose or mouth, and staying home and away from others whenever you're sick."

Alsop said he hadn't noticed more people going without masks as compared to two months ago.

Omni has put in place a universal masking policy, she said, with exceptions for people whose disabilities stop them from wearing a mask. Such cases are documented, she said, and require the patient to be isolated.

It's often OK to go without a mask outdoors, Tidwell said. She doesn't wear one while running, she said, though that means occasional detours to avoid coming into close contact with others.

The bottom line is there are times when it's best to wear a mask and times when it's unnecessary, she said, adding, "We should be able to apply those principles to both sides of the spectrum.”

Around the country, masks have taken a central role in tensions between governments trying to limit the virus's spread and groups pushing for greater freedom from health restrictions.

Last week, Orange County watered down a mandate that people wear masks in public, downgrading from a requirement to a "strong recommendation." The change came after the county chief health officer who imposed the order in late May received death threats and stepped down.

The federal Centers for Disease Control and Prevention released specific guidance Friday advising that, among other recommendations, staff members at large events be required to wear face coverings and that attendees also be encouraged to do so.

The new guidelines, which kept with previous CDC advice about wearing face coverings in public, came as The Associated Press reported COVID-19 cases are rising in almost half of U.S. states, even as Americans return to work and venture out during summer.

The AP reported there was no single reason for the increases but that some authorities blame reopenings and lifting of stay-at-home orders and other restrictions.

Local outbreaks are being driven, the state said, by skilled nursing facilities, state and federal prisons, and people from surrounding counties admitted to the county hospital.

In line outside HomeGoods on Friday, shopper Vickey Herrera went without a mask. While she sanitizes carefully and abides by other public health recommendations, she said, she's heard inconsistent information about when to use them.

Plus, they make her feel uneasy.

"Personally, when I would wear a mask, I would feel more fear," the southwest Bakersfield resident said.

Not far away in line, Palmdale resident Shelly Cortez said she doesn't think it's OK for people to go around in public without a mask.

She keeps extras in her purse in case one drops to the ground or someone she meets needs one.

"I think (people who won't wear a mask) are too confident that it's not going to spread," she said.