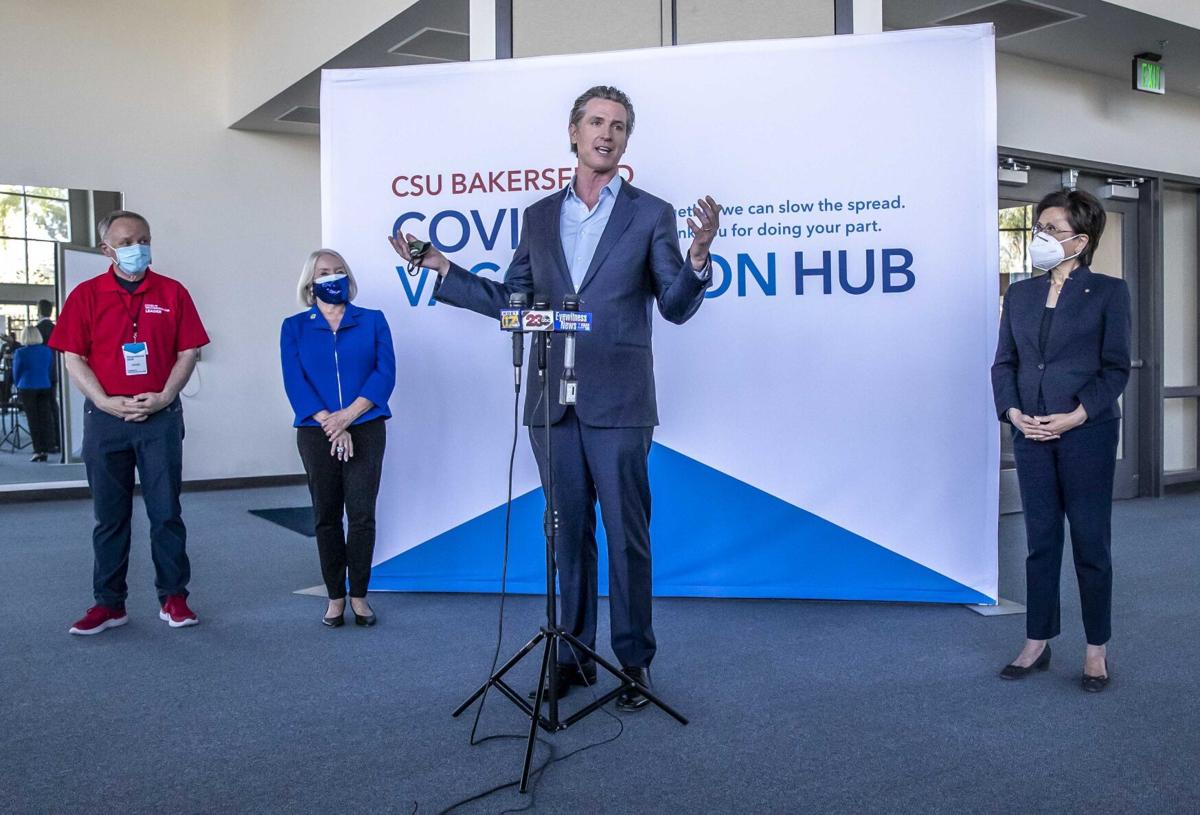 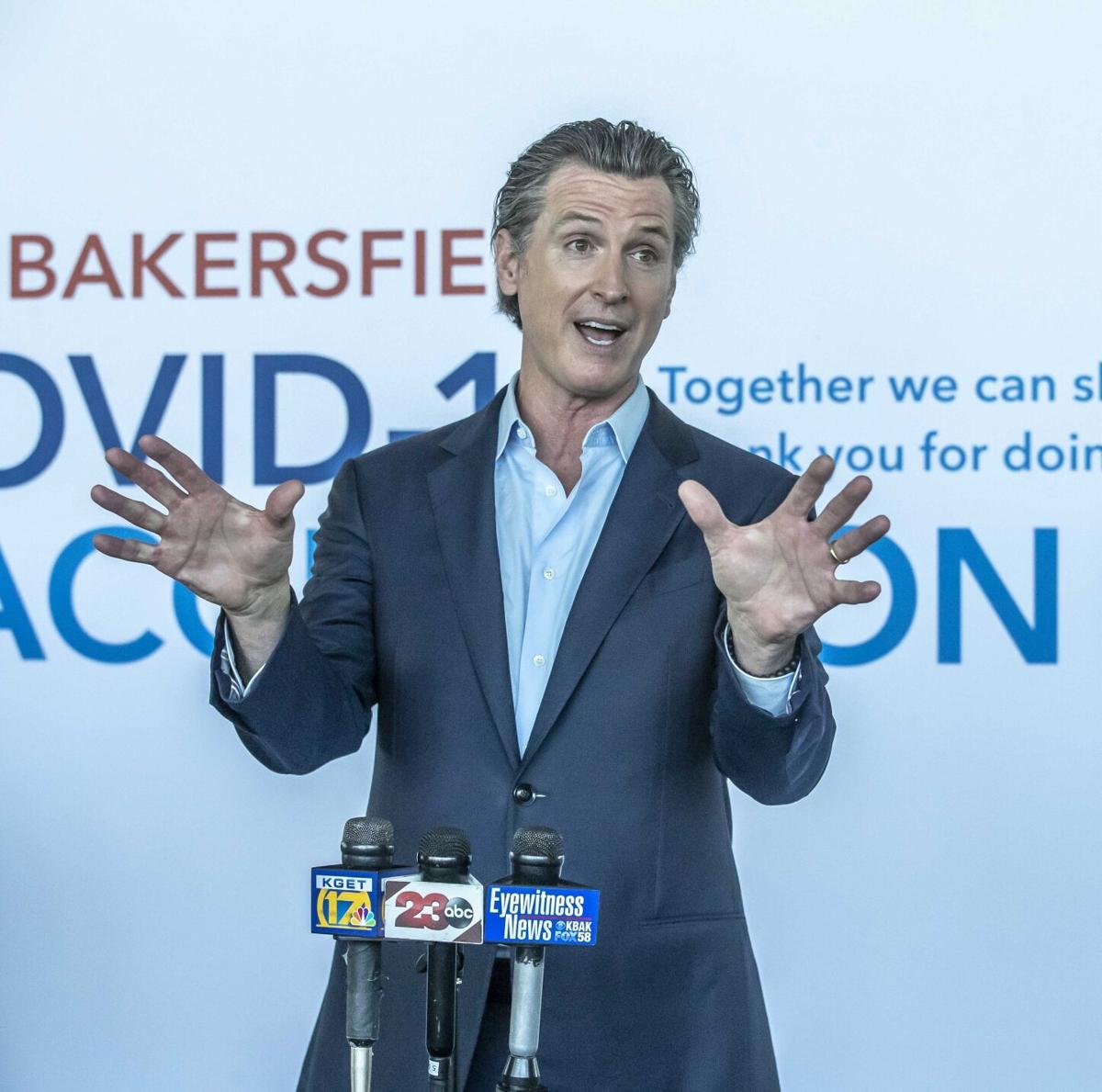 Gov. Gavin Newsom speaks during a press conference held at the mass vaccination site on the campus of Cal State Bakersfield on Friday afternoon. 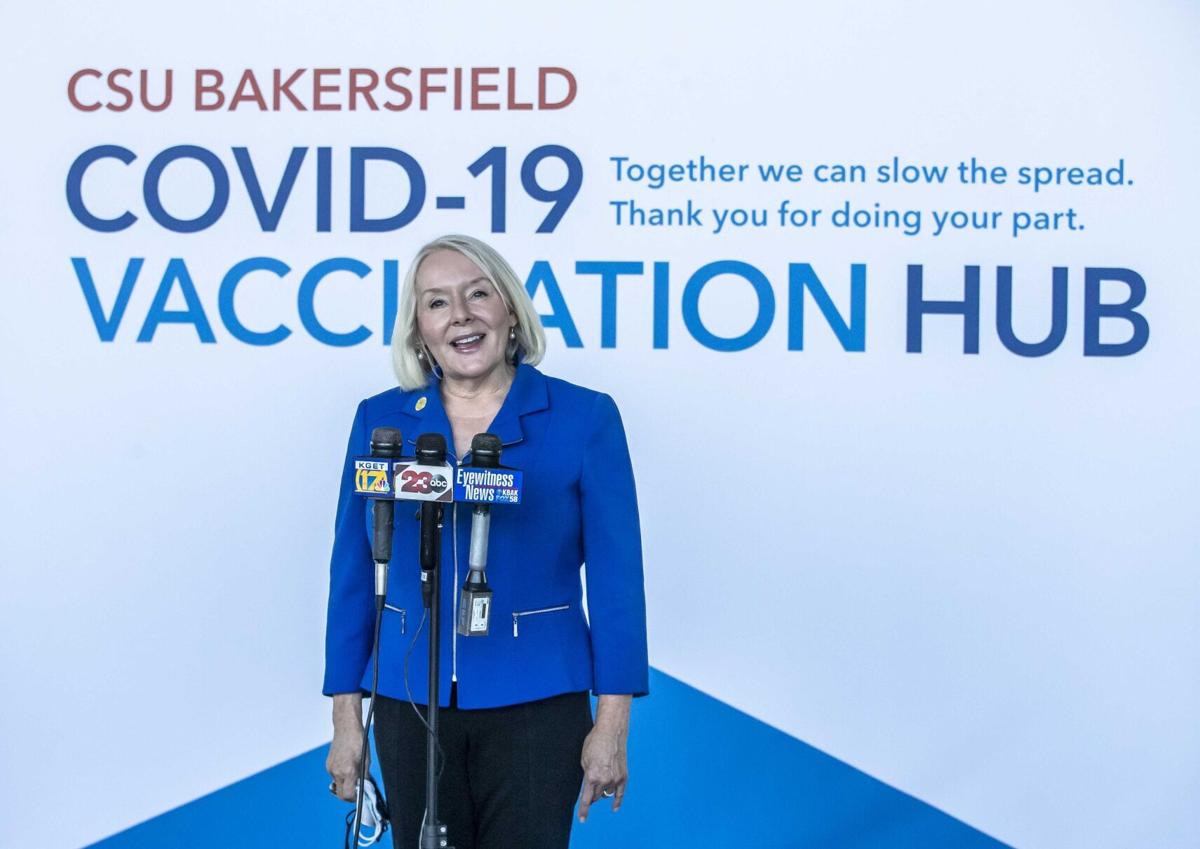 Gov. Gavin Newsom speaks during a press conference held at the mass vaccination site on the campus of Cal State Bakersfield on Friday afternoon.

The site is operating far under capacity. Averaging only 900 people per day, CSUB could serve 5,400 people daily.

“We are not reaching that capacity right now because we do not have enough people coming through our gates,” said David Womack, senior vice president at Kaiser Permanente, which is part of a consortium of health care providers running the vaccine center at CSUB. “We have plenty of vaccine.”

The governor briefly visited with residents seeking vaccinations before speaking to the media. During his public remarks he called the CSUB site one of the finest he’s seen in California.

“For everybody out in the community, I want to just make the point that there are enough vaccines here. Scarcity is not an issue. Supply is not an issue. This is open seven days a week. It’s one of the best experiences you can have,” he said. “It should make you eager this holiday weekend to make your way over here.”

The governor’s remarks are a testament to the stark increase in vaccine doses that have flooded into Kern County over the past few weeks. During Newsom’s last visit to a vaccine site in Arvin, a limited supply meant strict regulations determined who could get a vaccine and who needed to wait.

But in April, the prospects are set to change dramatically statewide, although limitations have already largely been lifted locally. On Thursday, all individuals over 50 were cleared for vaccination. On April 15, everybody over 16 will become eligible.

However, because coronavirus has hit Kern County disproportionately hard, the state has cleared the majority of the population for vaccination ahead of schedule. Now, everyone living in all but six zip codes are qualified for vaccination.

“The only constraint besides supply — that’s still a constraint in other parts of the state — is hesitancy,” Newsom said. “People who are unwilling or hesitant, or who think we are already there, everybody else did it, then we’re not going to get where we need to go, which is to end this disease.”

As of Thursday afternoon, 18.6 million vaccine doses had been administered statewide, 298,494 of those in Kern County.

The vaccine progress, along with nearly 4 million vaccines distributed to vulnerable populations, have allowed state officials to consider loosening the lockdown rules that have governed life outside the home for the past eight months. Newsom said he expected to make a major announcement regarding the state’s tier system early next week, likely Tuesday.

That would be welcome news to many local residents who have scorned the tier system, openly rebelling against it in some cases. While the governor did not go into details about what the announcement might entail, he hinted that it could allow counties with low levels of COVID-19 to return to life before the pandemic.

“It was never intended to be permanent, it’s temporary,” Newsom said of the colored tier system, called the Blueprint for a Safer Economy. “The question now is, when you’ve got orange and yellow, is there something besides yellow, besides orange? And the answer is yes.”