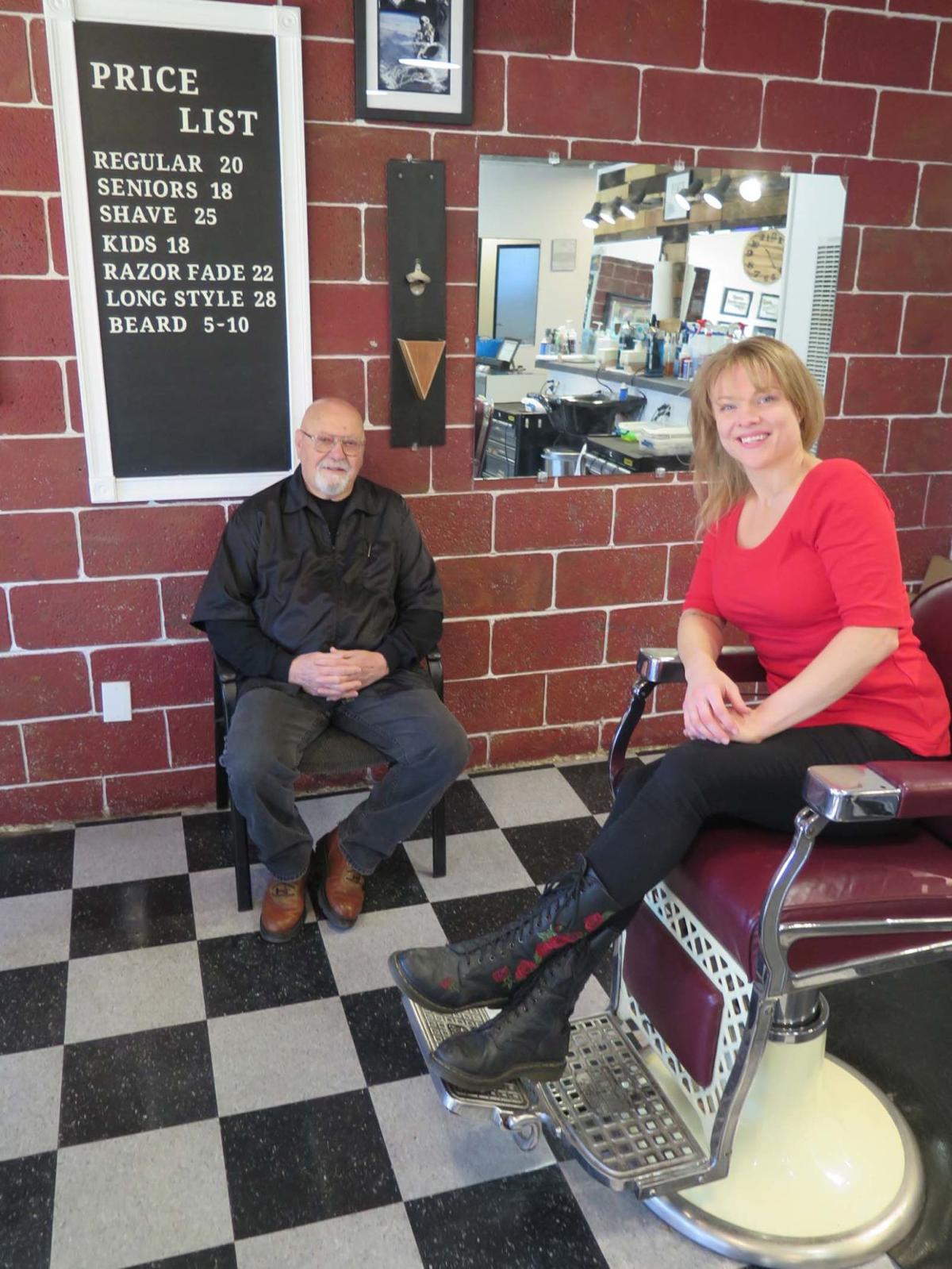 Bob Carey has rejoined his daughter, Moe, cutting hair at his old shop, which has been renamed Moe's Barber Shop. 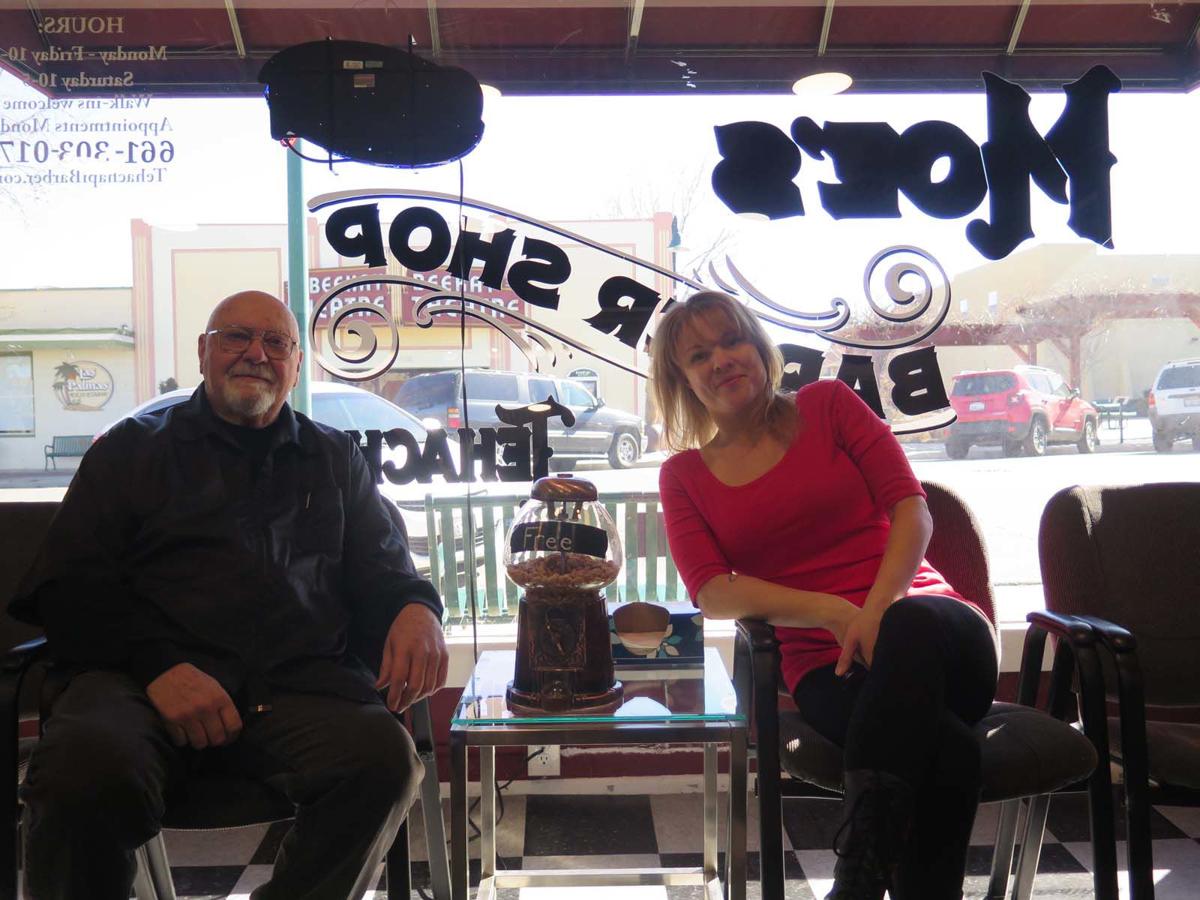 A lot has changed since Bob Carey left the shop three years ago, including the inside decor. Today, customers are welcome to sit back and enjoy free peanuts while they get their hair cut.

Bob Carey has rejoined his daughter, Moe, cutting hair at his old shop, which has been renamed Moe's Barber Shop.

A lot has changed since Bob Carey left the shop three years ago, including the inside decor. Today, customers are welcome to sit back and enjoy free peanuts while they get their hair cut.

Three years after retiring, barber Bob Carey has returned to his old barbershop on Green Street to rejoin his daughter, Amanda Abernathy, who goes by her childhood nickname "Moe."

A lot has changed since Carey has been away, such as the name of the tonsorium. For the first 35 years, Carey could be found beneath the swirled pole of Bob's Hot Rod Barbershop. After handing his clippers over to his daughter, she changed the name to Moe's Barber Shop.

But that's not all. The inside of the salon has also been transformed to further carry its original charm of yesteryear.

In her father's absence, Moe has put in many hours detailing the inside of the shop, including painting the original cinder blocks a deep, brick color. Gone are the many photographs of hot rods that once covered the walls, and in their place hang welcoming signs which further lend to the shop's appeal. On the ceiling now hang rustic pieces of old sheet metal, which Moe herself installed.

The shop's original barber chairs, which date back to 1959, still look out the front, plate glass window, allowing customers to sit in ease and chat as they get shaves and a hair cut.

"The shop still has the same old feel," said Moe.

Carey and his wife, Allison Carey, spent the first two years of their retirement on Allison's family farm in Raymond, located near Yosemite.

"I fed horses, fed chickens and collected eggs," said Bob of the laid back life many of us dream of in our golden years. "It was fun."

The Careys then relocated to Bakersfield to help Bob's sister care for their mother.

"After that, I was bored, so my wife told me to go to work," said Bob.

Taking his wife's advice, the Careys returned to Tehachapi and Bob went to work for a short time at another local barbershop. He made the decision to rejoin his daughter to give her a hand. Moe, who was going through a divorce, said she needed her father's help to keep the shop afloat.

"I wanted to give Moe a hand and keep the shop open regularly," said Bob.

Moe said she is very happy to work with her father again, as the pairing is a natural fit.

"We get along really well, and it's a very seamless interaction with the customers," said Moe.

Bob said he has missed his customers, who continue to find their way back to their longtime barber.

"I need to find them all," laughed Bob, adding he has no foreseeable plans to retire in the near future.

After a difficult time in her life, Moe said she is relieved to return to work.

"It's a good fit, and we work well together. It's always fun, and we are always laughing because there is always something going on in here. It's nice to have him back," said Moe of her father.

Since Bob's return, the barbershop's hours have also extended. Bob opens the doors at 9 a.m. and works until 5 p.m. Tuesdays through Saturdays. Moe joins her father at 10 a.m. and closes the doors at 6 p.m. Moe is also available on Mondays by appointment only.