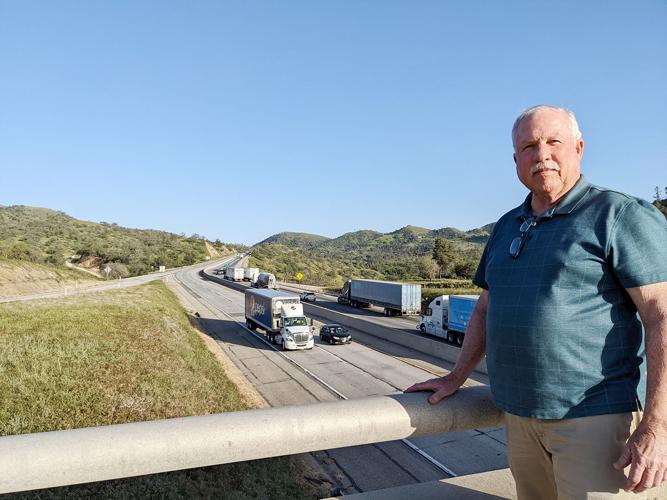 Tehachapi Mayor Phil Smith is frustrated that truck climbing lanes on the eastbound side of Highway 58 west of Tehachapi are years behind their original schedule. As a representative to the county’s transportation planning agency, he has advocated for the lanes for more than a decade. 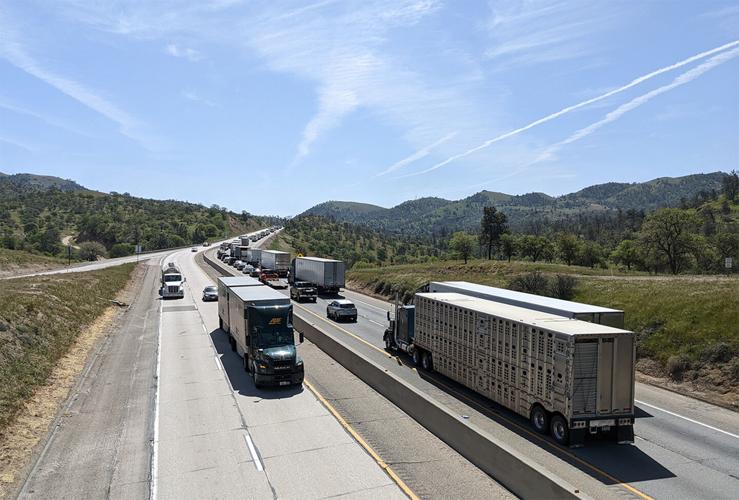 A view of Highway 58 traffic from the Broome Road overpass on April 8. Projects to improve safety and reduce congestion are years away from completion.

Tehachapi Mayor Phil Smith is frustrated that truck climbing lanes on the eastbound side of Highway 58 west of Tehachapi are years behind their original schedule. As a representative to the county’s transportation planning agency, he has advocated for the lanes for more than a decade.

A view of Highway 58 traffic from the Broome Road overpass on April 8. Projects to improve safety and reduce congestion are years away from completion.

Jon Hammond, chronicler of all things Tehachapi, tells us that the first road built to bring travelers up Tehachapi Canyon was Woodford-Tehachapi Road. More than 160 years later, most of that original road is still in use — although the dirt path through the mountains from Keene (location of Woodford Depot) has been improved over the years.

William Hood of the Southern Pacific engineered the railroad through Tehachapi Pass more than a decade after horse and oxen-drawn wagons were making their way up that dusty trail. He routed the railroad to the north of the road. His efforts, including designing the world-famous Tehachapi Loop, aided the state’s economic development by allowing trains to run between central and southern California.

The Loop was completed in 1876 and the development of the railroad to Tehachapi and beyond continued. But Hammond said motor vehicles didn’t make their appearance in the Tehachapi Valley until around the turn of the century.

By the 1950s, there was much more traffic and eventual development of Highway 58. State transportation engineers routed the new freeway to the north of the railroad and the old mountain road.

When the freeway was completed through the Tehachapi Valley in 1970 — running north of the developed community at the time — travel time between Tehachapi and Bakersfield was considerably reduced. Through traffic, including trucks, no longer traveled along what was then G Street (now Tehachapi Boulevard).

Another 50 years have passed, and the freeway just west of Tehachapi is in disrepair. The fix for that, according to Caltrans, is the $165 million Keene Paving Project. Environmental review is underway. The tentative construction schedule shows a start date of March 2025 and an end date of November 2026, all subject to funding. The paving project will cut away mountains to straighten the road and may reduce accidents that seem to require the highway to be closed with increasing frequency.

And although the project won’t solve the bottlenecks that develop on the eastbound side when massive big rigs pull into the high lane to pass slower trucks, Caltrans plans to include wildlife access features that may eventually mitigate environmental concerns related to the long-planned truck climbing lanes.

Tehachapi Mayor Phil Smith knows the Highway 58 corridor west of the city better than most people. His father was a railroad signalman. He spent the first 10 years of his life living in railroad housing next to the Woodford Depot before his family moved to Tehachapi in 1960.

He was away, serving in the Coast Guard, when the freeway finally made it all the way through the Tehachapi Valley, but he returned to town after his military service.

Smith has served on the Tehachapi City Council continuously since 1986. In December 2020 he was elected by his fellow council members to serve his fifth term as mayor.

And through many years of service as the city’s representative to the Kern Council of Government, the mayor has learned plenty about transportation. Kern COG is the agency responsible for regional transportation planning. In 2018 the agency recognized Smith’s contributions by awarding him the Ronald E. Brummet Regional Award of Merit for Lifetime Achievement.

“I have served on Kern COG with Councilman Smith for many years and appreciate his strong advocacy for important transportation projects throughout Kern County,” he said.

Smith joined the Kern COG board of directors in 1995 and was involved in the prioritization process of regional transportation projects including Highway 58 through Mojave and the widening of Highway 14 and US 395.

The mayor has also advocated for truck climbing lanes to alleviate problems on the eastbound side of Highway 58 coming up the hill from Bakersfield. And he’s frustrated that despite years of discussion, the project has not yet moved off the drawing board.

“It’s of regional importance,” he said of the need to relieve truck congestion on Highway 58. “It’s not just important to Tehachapi.”

In January 2020, Tehachapi News reported that Caltrans was close to releasing details about three sections of truck-climbing lanes that would allow motorists to pass slow-moving tractor-trailers traveling on Highway 58 from Bakersfield to Tehachapi.

“Staff are conducting environmental analysis and preparing a Draft Environmental Document,” he said in an email on April 4. “The schedule for public circulation of that document is Winter/Spring of 2023.”

According to information provided to Kern COG in January 2020, as reported by Tehachapi News at the time, lanes are being considered from Beale Road to Tehachapi Creek Bridge just west of the city.

At the meeting, District 9 representatives shared a preview of three specific locations for the proposed truck climbing lanes:

• Starting halfway between Beale and Bena roads and ending shortly before Highway 223;

• Beginning shortly before Bealville Road and extending to Hart Flat; and

• Starting before Broome Road and ending before the Tehachapi Creek Bridge.

In a 2012 study completed by Kern COG, it was estimated the project would cost about $8 million per mile per lane  — about $99.2 million. The lanes were recommended for implementation by 2020. The estimate is now up to about $150 million with a start date of October 2026 and an undetermined end date.

Kern COG’s 2022 regional transportation capital improvement projects summary shows about $14.2 million toward the project, including $5.251 million from COVID-19 related funding. Transportation projects are typically funded in phases over many years.

When considering the development of transportation up Tehachapi Canyon and through Tehachapi Pass, it might be worthwhile to remember that construction on SP’s Tehachapi line — including the Loop — began in 1874 and was completed in 1876. Of course, there was no environmental review for the project and no labor laws to protect the interests of the thousands of Chinese workers employed to complete the task.

But a railroad of a different sort may further complicate efforts to improve highway safety and alleviate truck congestion — California’s High-Speed Rail. The troubled project was approved by voters in 2008. Its costs have skyrocketed since then, with no end in sight.

Plans for the Palmdale to Bakersfield segment of the railway show it traversing Tehachapi Canyon and its route will likely need to be considered as Caltrans prepares engineering studies for planned projects.

In a letter to the High-Speed Rail Authority in April 2021, Gayle J. Rosander, external project liaison for Caltrans, noted that continued collaboration between the agencies will be necessary “to ensure efficiency as projects progress” and specifically mentioned the Keene paving and truck climbing lanes projects as well as wildlife connectivity.