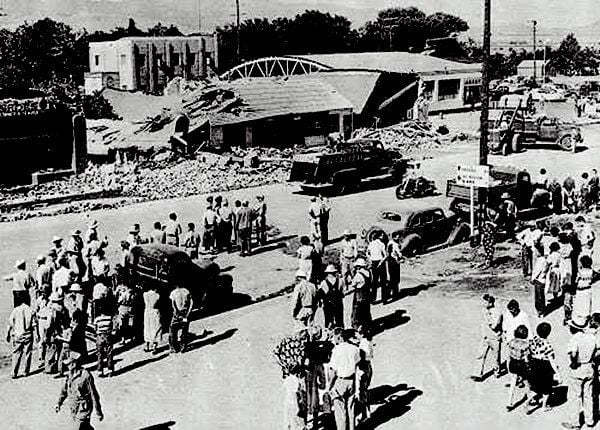 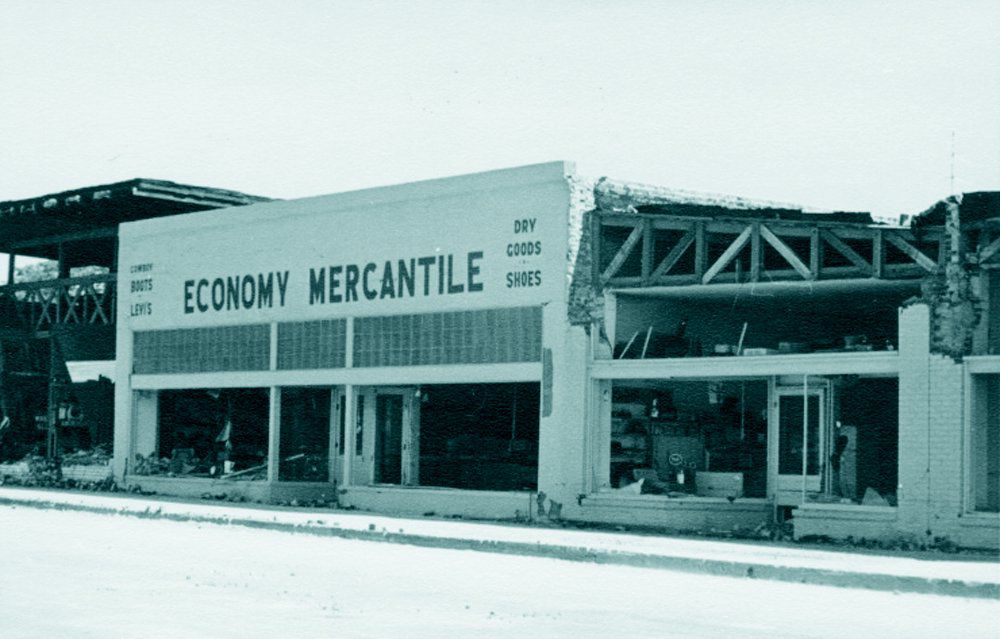 Growing up in Tehachapi, I was well aware of the great quake of 1952.

Some of my friends were babies when the earthquake struck and told stories they’d heard from their families.

My parents lived in Tehachapi the year before the quake and we were back the year after and my mother told me the dramatic difference it made in the downtown area particularly, with so many of the charming old brick buildings gone.

And if you’ve ever wondered why downtown Tehachapi has so many buildings with “mid-century” architecture (if you can call it that), well, there is a simple reason. Pretty much the entire downtown district was leveled in 1952.

When I was a kid we lived for awhile in a house in the Cummings Valley that survived the earthquake (alas it did not survive a fire later). Most of the house was built on a wooden foundation, but at some point a bedroom was added on with a concrete slab floor. The earthquake left a deep crack in the foundation, several inches wide at the top and the floor was no longer level.

In the print edition of the Tehachapi News this week we have articles by Pat Gracey, Joan Johnson and Pat and Hugh Vasquez, each sharing their personal memories of the quake with our readers. We will will publish each of these stories online over the next week.

For the record, here are a few facts about the 1952 Tehachapi earthquake:

• The epicenter measured 7.7 on the Richter scale and centered on the White Wolf Fault southwest of Bakersfield.

• It was the most powerful earthquake to hit Southern California in the 20th century and the largest in the U.S. since San Francisco's in 1906.

• Six subsequent jolts, some as big as magnitude 5, followed within moments and hours. Within two months after the quake, Caltech had recorded 188 aftershocks of magnitude 4 and higher. On Aug. 22, 1952, downtown Bakersfield suffered substantial damage when a 5.8 magnitude earthquake was recorded on the same fault.

• Fewer than 2,000 people lived in Tehachapi at the time — and the town did not have dial phones; you cranked your phone and let the operator know what number you wanted to reach (the News office was Tehachapi 55).

• The facility in the Cummings Valley that we know today as California Correctional Institution was known at the time as the California Institution for Women, the state’s only prison for female. It had about 417 inmates and they were moved to the newly constructed prison at Frontera, near Chino, due to damage from the earthquake. Each was later given a month off her sentence as a “good conduct” reward.

• There were 12 victims of the earthquake and at least 35 seriously injured.

• The highway into town — known at the time as US Route 466 — was not the direct Highway 58 that we know today. And an already not very good road was made even worse by the earthquake — it buckled and cracked, making transportation difficult.

• The earthquake damaged or destroyed 75 homes and 25 businesses including the Tehachapi Hospital, which was badly damaged and later torn down as were old landmarks such as the 1907 Masonic Temple (the Tehachapi News office was downstairs), the Juanita and Summit hotels and the Tehachapi Inn. Damage has been estimated at more than $60 million.

CLAUDIA ELLIOTT is editor of the Tehachapi News.