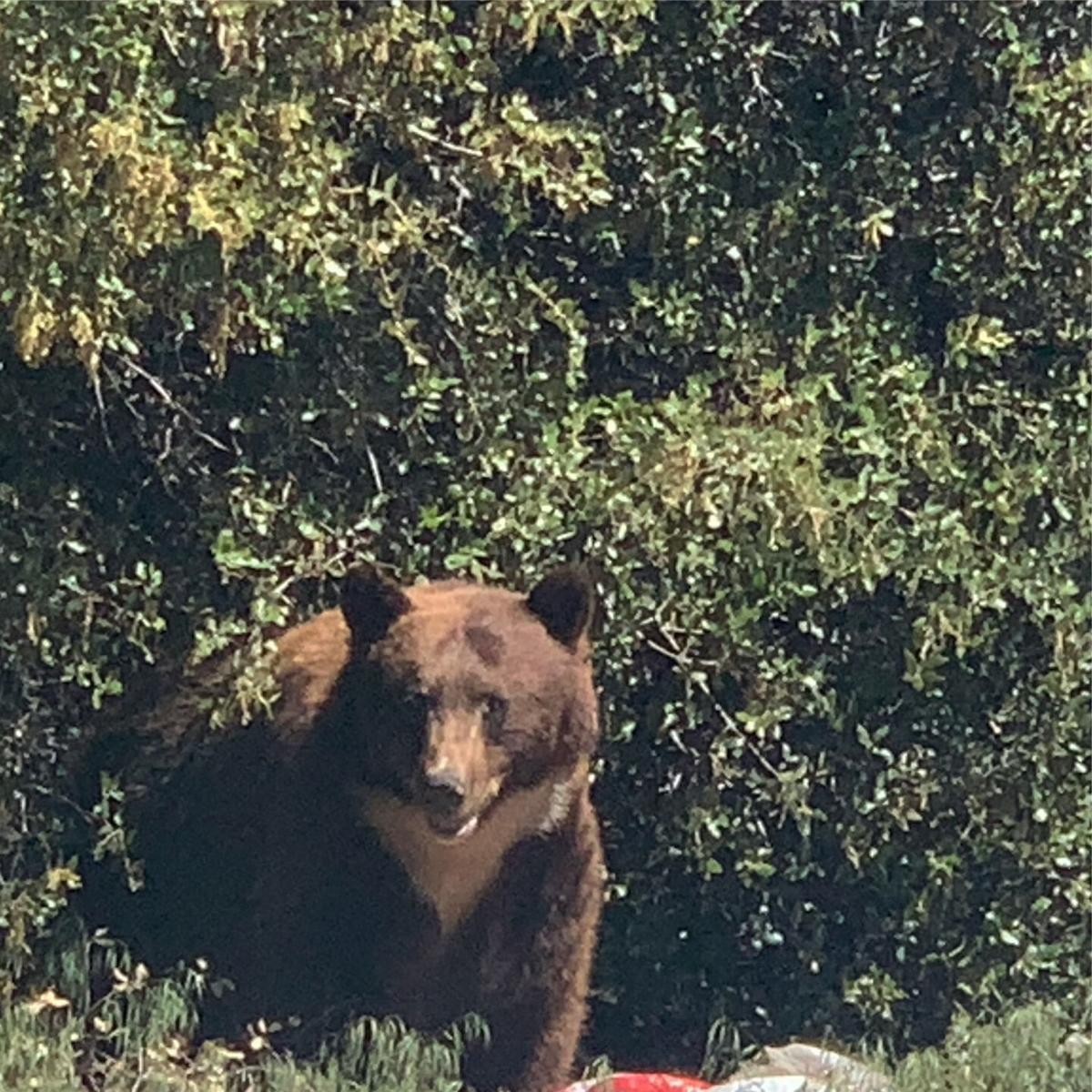 Nikki Craig, a resident on Paramount Drive in Bear Valley Springs, was surprised to see this visitor early on a Friday morning. 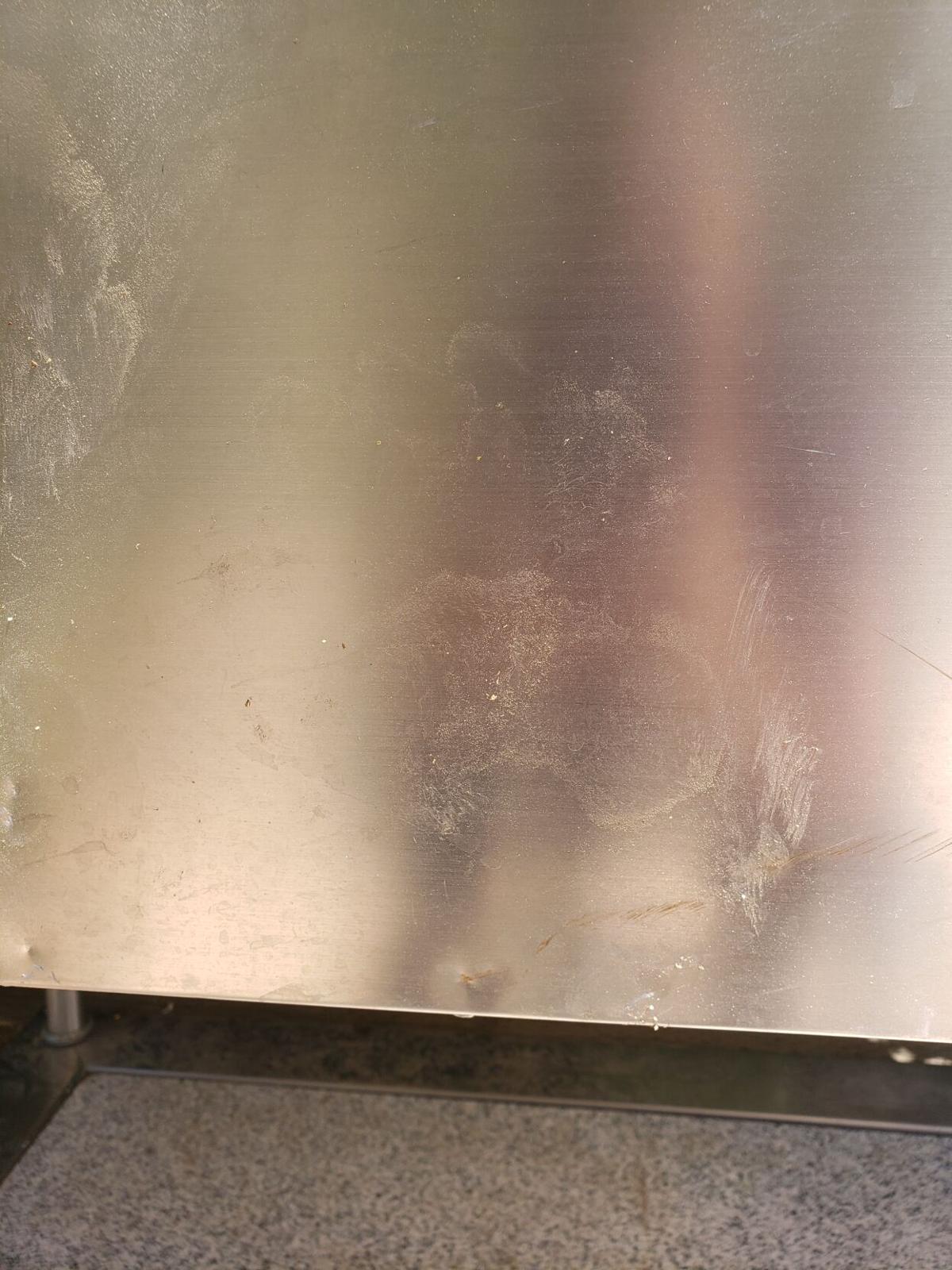 Bear paw prints were left on the cooler where Andrea Broaddus keeps her dog food. "Our dog isn't a barker, but has barked from the garage each night," Broaddus said of her home in the Valley Vista area. 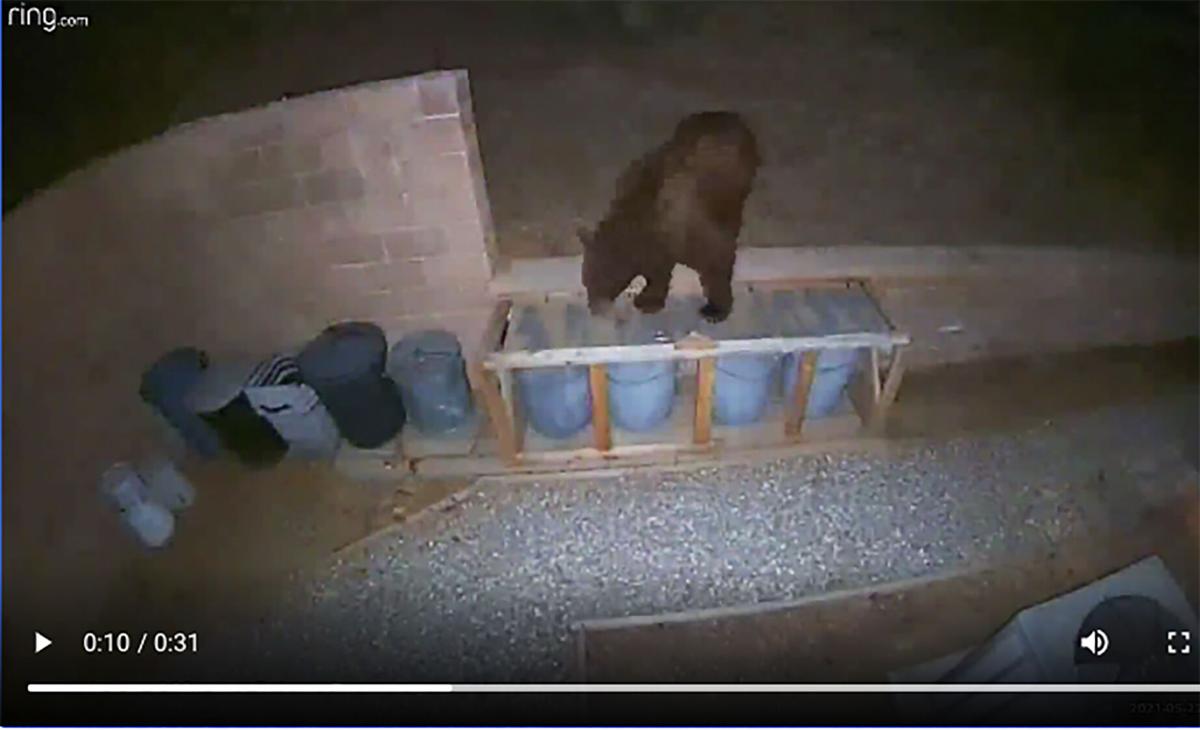 Ashlee Coddington shared this image of a bear rooting through the trash can at her father's home on Ricker Avenue last week.

Nikki Craig, a resident on Paramount Drive in Bear Valley Springs, was surprised to see this visitor early on a Friday morning.

Bear paw prints were left on the cooler where Andrea Broaddus keeps her dog food. "Our dog isn't a barker, but has barked from the garage each night," Broaddus said of her home in the Valley Vista area.

Ashlee Coddington shared this image of a bear rooting through the trash can at her father's home on Ricker Avenue last week.

Local residents have been flooding social media with images of a wayward bear, or bears, that have been spotted visiting homes and digging through trash cans over the past few weeks.

The first bear reported on social media was spotted in Ridgecrest at the Walmart parking lot.

According to Jessica Weston of The Daily Independent, the male bear was seen the morning of May 13 digging through trash cans, and was later captured by the California Department of Fish and Wildlife.

No one was injured, and the bear, deemed safe by authorities, was captured and relocated.

Nikki Craig, a resident on Paramount Drive in Bear Valley Springs, was surprised to see a bear as she went outside to feed her animals early Friday morning.

"I was pretty close to it. It was up on my driveway and he came through the bushes," said Craig.

This isn't the first time Craig has seen the bear on her property.

"He's a lot bigger than the one that was in my kitchen ... about two years ago. It also got in my car, so they know how to open doors and windows," Craig said.

Ashlee Coddington, a resident of Aldante Court in Country Oaks off of Highline, reported seeing a bear that she estimated weighed approximately 500 pounds on her property and on the property of her father on Ricker Avenue.

"We have big dogs that are surrounding us, and we kept thinking the dogs were getting in our trash cans," Coddington said.

After a steel door was ripped off a storage container in her yard, Coddington said she realized it had to be a bear.

"We have a neighbor who reported a deer was killed by a bear right on her porch... We also have a bobcat that lives on the property and a mountain lion that lives at the end of Ricker Avenue," Coddington said.

Terri Nelson also reported hearing a crash the early morning of May 25 on Quail Springs Road.

"I jumped up and all the motion detector lights were on the property," said Nelson.

After her dog jumped under the bed, Nelson first thought her home was being burglarized.

Nelson and her husband, Jon, went out onto the second-story deck and saw a bear dragging their trash bags up the hill, looking for two bags of rotting apples that were discarded inside.

"He wasn't huge, but he wasn't small either," said Terri Nelson.

This is the second time in five years the Nelsons have seen bears on their property.

Abigail Gwinn, a wildlife biologist for the California Department of Fish and Wildlife in Kern County, said she has not personally received bear reports in Tehachapi this year.

"I did receive several last summer from throughout the Tehachapi area," Gwinn said. "I also just this week have started receiving reports from Hart Flat, and I was notified about two young bears on the Pacific Crest Trail near Manter Creek persistently going after backpacker’s food bags."

That section of the Pacific Crest Trail is one of the areas where bear-proof canisters are not required.

"That doesn’t mean that CDFW was not notified about recent bear activity in Tehachapi," Gwinn said. "It’s likely our wardens or our volunteers in the Natural Resources Volunteer Program were contacted directly by the public and responded."

Gwinn said CDFW monitors wildlife sightings and incidents throughout the state to track trends and seasonal variation, and identify hot spots of activity. It can be accessed directly at apps.wildlife.ca.gov/wir.

According to Gwinn, reports from last year indicate there are several bears in the area.

"I received multiple reports of a female bear with three cubs that will be yearlings this year, and reports of a few other individuals," Gwinn said. "Tehachapi is surrounded by bear habitat and is part of the linkage between the southern Sierra Nevada and the Transverse Ranges, which includes the Tehachapi Mountains. Likely there are several resident bears that were born in the general Tehachapi area, and bears dispersing from the surrounding Sequoia, Angeles, and Los Padres national forests looking to establish territories of their own."

"We observed a similar increase in sightings of bears in populated areas during the previous drought throughout the state. Human behavior also has played a role," Gwinn said. "Many of the bear reports from last year in the Tehachapi area involved bears raiding chicken coops or getting into garbage. Bears that learn they can get food from areas with houses and people will continue to seek those areas out. We call this a habituated bear."

Details about what to do in case of black bear encounters can be found at the Keep Me Wild page: https://wildlife.ca.gov/Keep-Me-Wild/Bear.

• If the bear breaks into your house, move away to a safe place, do not block exits, and if the bear does not leave, call 911.

• If a bear is present in your yard but there is a safe distance between you and the bear, you can encourage the bear to leave using noisemakers.

• If a bear approaches you, make yourself look bigger by lifting and waving your arms. Use noisemakers or yell, and keep small children close.

• Prevention is the key, and that starts with removing all attractants from around the house and property. In general, black bears are looking for maximum calories with a minimum of effort.

• Trash cans are a huge attractant for bears. It is very important for people to make sure that their trash is secure. This could mean keeping trash cans inside a garage or sturdy shed until collection day, or building a bear-proof enclosure to store trash cans.

Anything with a food scent is attractive to bears, so that includes recycling bins with recyclable food containers or yard waste bins with rotting fruit or vegetables. Disinfecting trash cans regularly with bleach or ammonia helps a lot to keep down the smell, but it is most effective to exclude bears from trash cans entirely.

There are bear-proof trash cans on the market, though residents may need to work with their local collection service to make sure they are getting a product that is compatible with the collection truck. https://wildlife.ca.gov/Keep-Me-Wild/Products

• Bird feeders, both seed and nectar, and highly desirable to bears due to their high calorie content. Livestock or pet food are also attractive to bears so it is important to make sure bags and containers of food are securely stored. When feeding pets outdoors, limit food availability to only meal time and promptly clean up any spills.

• Barbecue grills should be cleaned promptly and ideally stored inside a sturdy shed or garage as any lingering smell of food cooked on the grill can attract bears.

• Some bears have learned how to open car doors, so take care never to leave food or scented products inside vehicles, clean up any crumbs or spills regularly, and always lock the doors when unattended, especially at night.

• Given the drought, allow artificial sources of water such as decorative fountains to go dry when possible. Water, of course, must be provided for pets and livestock, but take precautions to prevent wildlife access to that water. If the dog comes in at night, bring in the bucket of water too. If you fill a kiddie pool for your children to play in during the day, make sure it is empty or excluded from wildlife when they are done.

It may seem like a kindness to provide water to wildlife during severe drought conditions, but we have found that this only increases conflict with humans — with often fatal results for the wildlife — and increases the incidence of disease transmission between animals. There are multiple lakes with permanent water throughout the Tehachapi communities, as well as many natural springs in the hills where thirsty wildlife can find water even during the hottest summer months.

• Black bear attacks on humans in California are extremely rare and typically defensive such as when surprised or defending cubs. Generally bears can be frightened away from property fairly easily, especially if people make an effort to use different types of noisemakers and hazing techniques to keep it new and scary.

A bear that is always greeted by an airhorn will soon learn that an airhorn poses no actual threat. But if the airhorn is one of many different noisemakers it might encounter, it takes much longer for the bear to become used to it. Community efforts to remove and secure attractants are very effective in keeping bears out of neighborhoods. The only reason bears are coming close to houses is because they are finding food. Once they stop finding food in an area they will leave to search somewhere else.